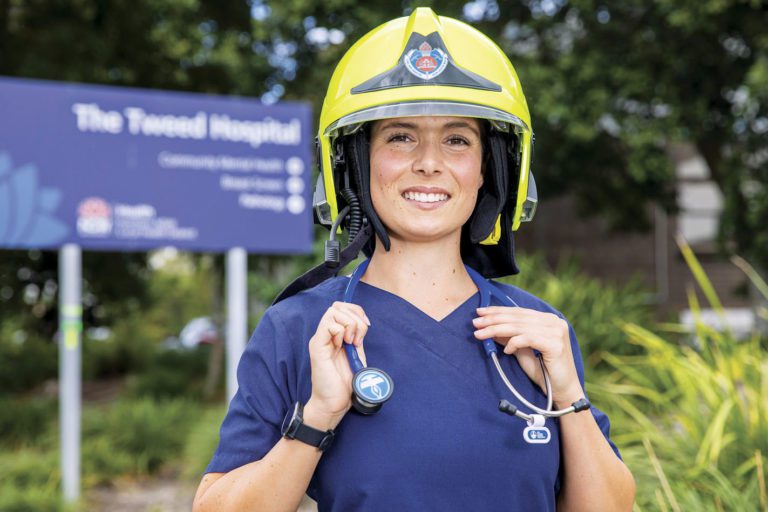 Communities love to celebrate their rescue volunteers, emergency personnel and health workers but it’s not often we hear about a frontline superstar like South Tweed local Sophie Longworth, who manages to do all three.

A nurse, trained firefighter and volunteer surf lifesaver, Sophie completed her Bachelor of Nursing at Southern Cross University’s Gold Coast campus before scoring her dream job at Tweed Hospital as a graduate surgical nurse caring for acute patients. Sophie gives us a fascinating glimpse into life on the frontline across three different industries – and the importance of prioritising self-care. 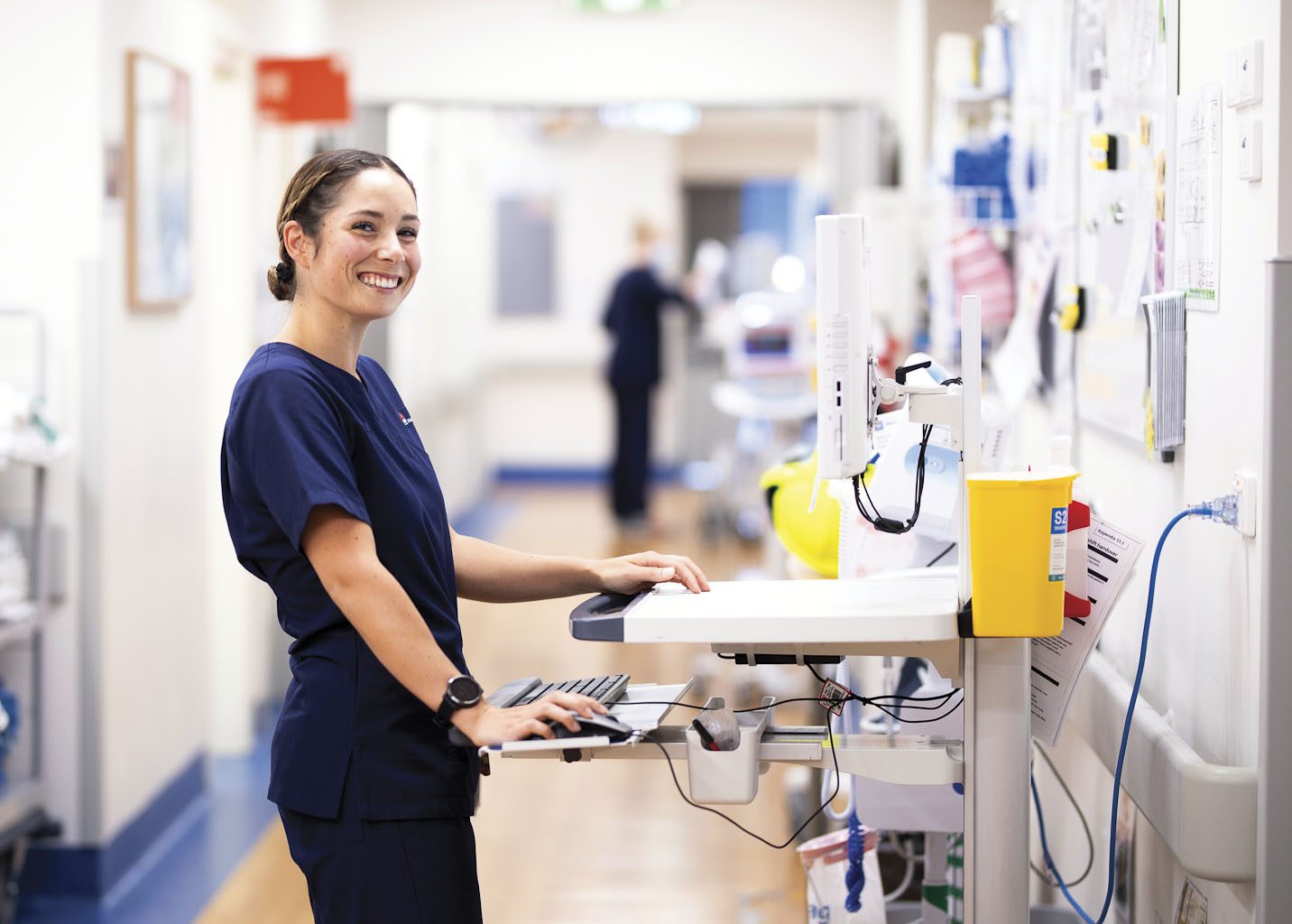 Sophie Longworth graduated with the Bachelor of Nursing in 2019. She works full-time as
a registered nurse at the Tweed Hospital. She is also a retained firefighter.

She quickly gears up and is one of four firefighters to swing into the truck for the cross-border mission.

As they near the Queensland border with lights and sirens, a plume of ash drifts skyward above a unit block engulfed in flames.

Arriving on scene, everyone has escaped – some through the windows. Sophie’s team immediately gets to work as one of five pumpers containing the fire while other crews continue with search and rescue to ensure everyone is safe. 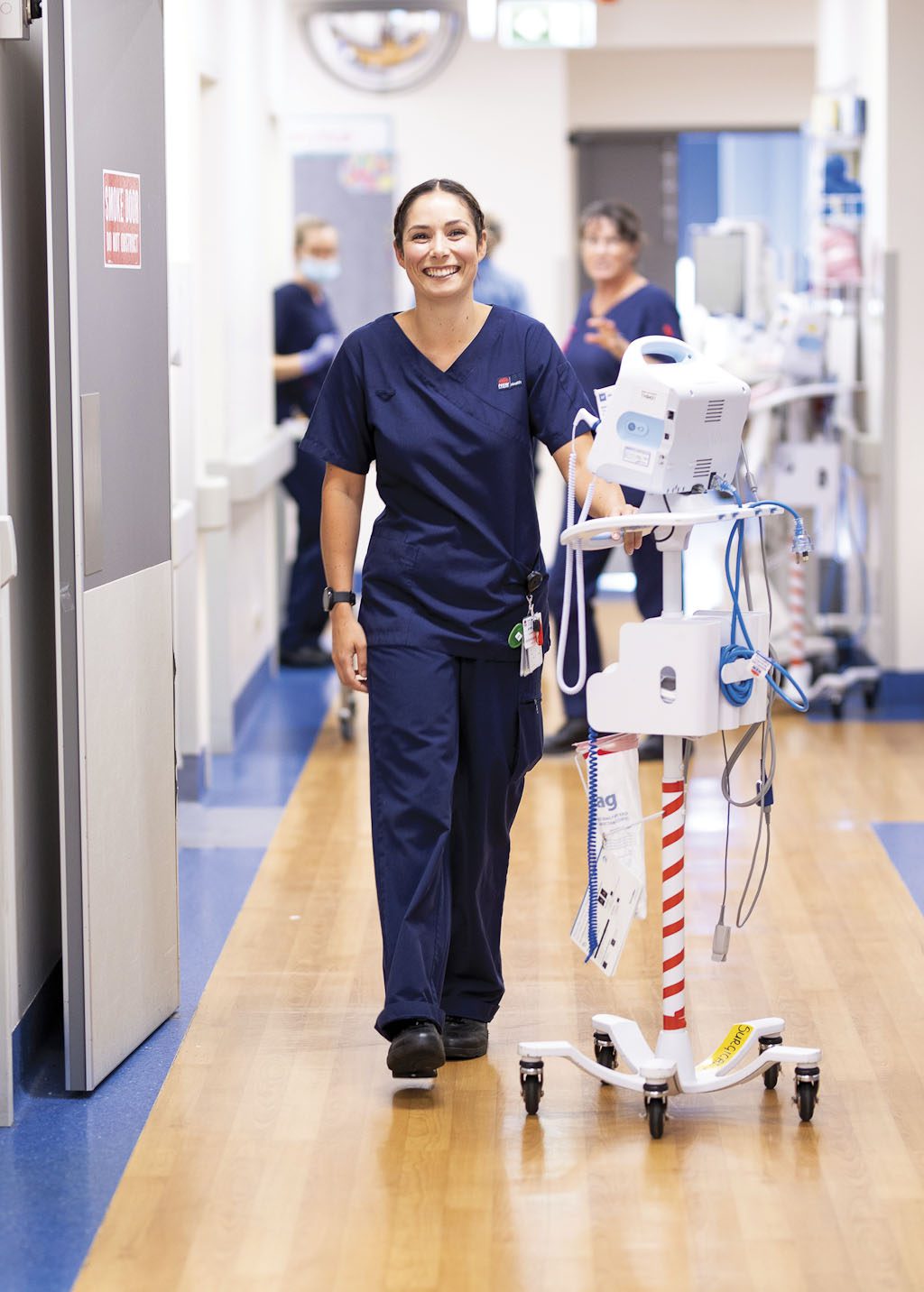 Months later, as Sophie recalls the blaze – her first major fire incident – she remembers the smell of thick smoke in the air.

“I followed the instructions of the officer in charge and followed the lead of my fellow firefighter who had experience in attending these types of incidents. I was using a 70mm hose to help extinguish the blaze and protect adjoining properties.”

Sophie, 25, says working under pressure and helping people is in her DNA.

“Growing up, I’ve been surrounded by a family of frontline workers who give back to the community. My mum is a nurse and my dad was a paramedic. Now both of them, and my sister, all work at John Flynn Hospital in Tugun,” she says.

And, for as long as she can remember, Sophie’s family has been involved with Coolangatta Surf Life Saving Club.

“I think I was a surf life saver from before I could walk,” she says, laughing. 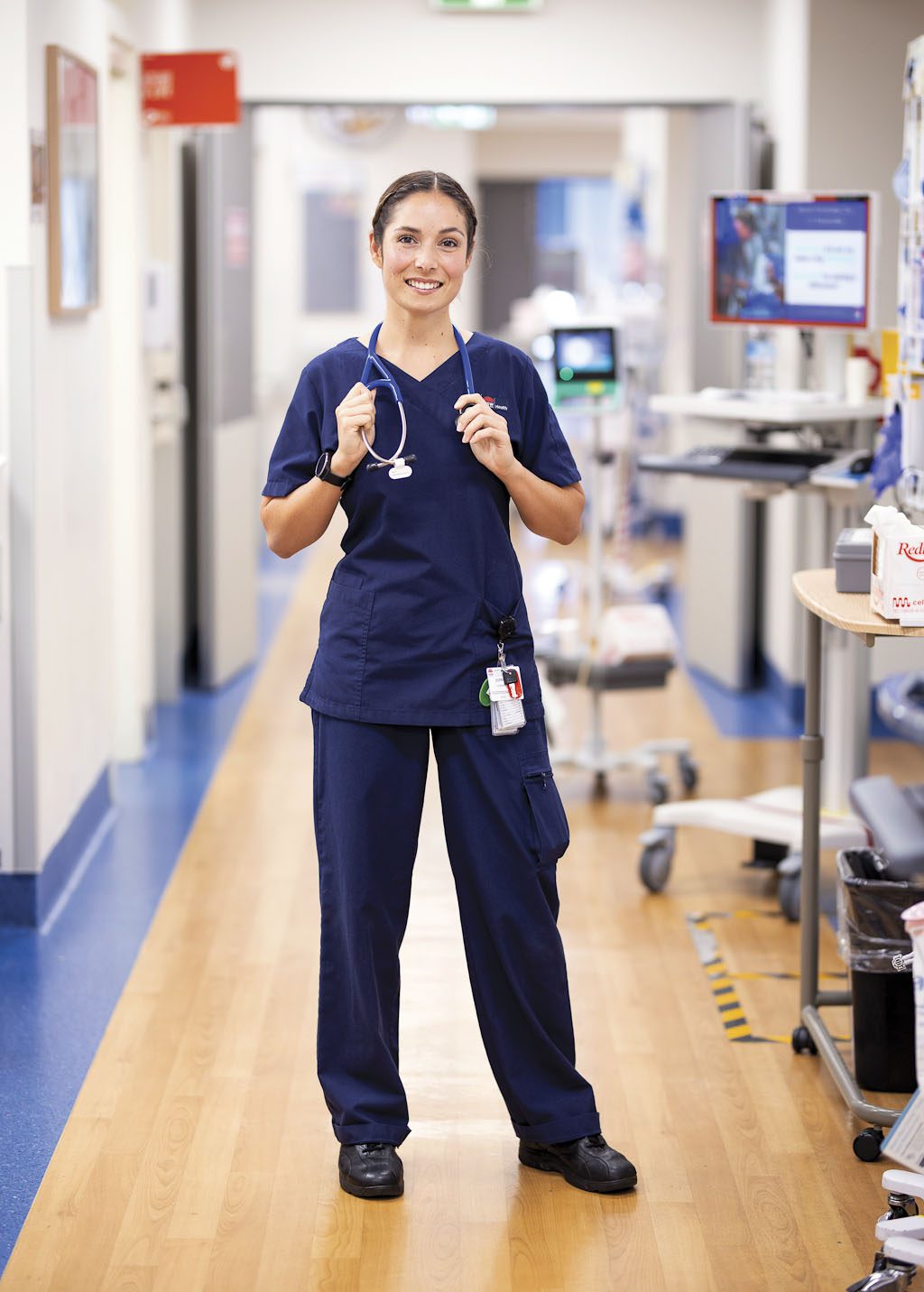 “I used to do the competitions when I was younger but now I volunteer each summer. It’s such a good crew to volunteer with, family and friends. I do it with my dad and sister and it’s a great way to hang out together while volunteering our time and helping out the community and enjoy being at the club even when we’re off duty.

“I vividly remember our family having a surf club lunch one time when I was in primary school, and an old man at a table not far from ours started having an episode. Without any hesitation, my parents walked over and helped that man and his wife. They were able to manage the situation and fully brief the ambos once they arrived.

“Growing up in that environment, I adapted the same ethics and I just wanted to help.”

After completing Year 12, Sophie enrolled in a speech pathology course, but while the content interested her, she knew her skills and passion were geared more towards critical care situations.

She decided to take a year off and work in the United States as an au pair, where she had a great experience nannying in Long Island, New York, for a family with young children, and latrine New Jersey for a family with older children. The experience gave her the space she needed to try something different and choose her future.

“Southern Cross is just down the road so it was super convenient and it’s in such a beautiful spot next to the beach – plus a lot of my friends had also enrolled there,” she says.

“I found out that because the university is close to the state border and has campuses in both Queensland and NSW, it would give me more of an opportunity for my first preference in either state after university – which was a very big bonus.”

Before completing her final year of study, Sophie applied for graduate nursing positions and was awarded her first preference at the Tweed Hospital. 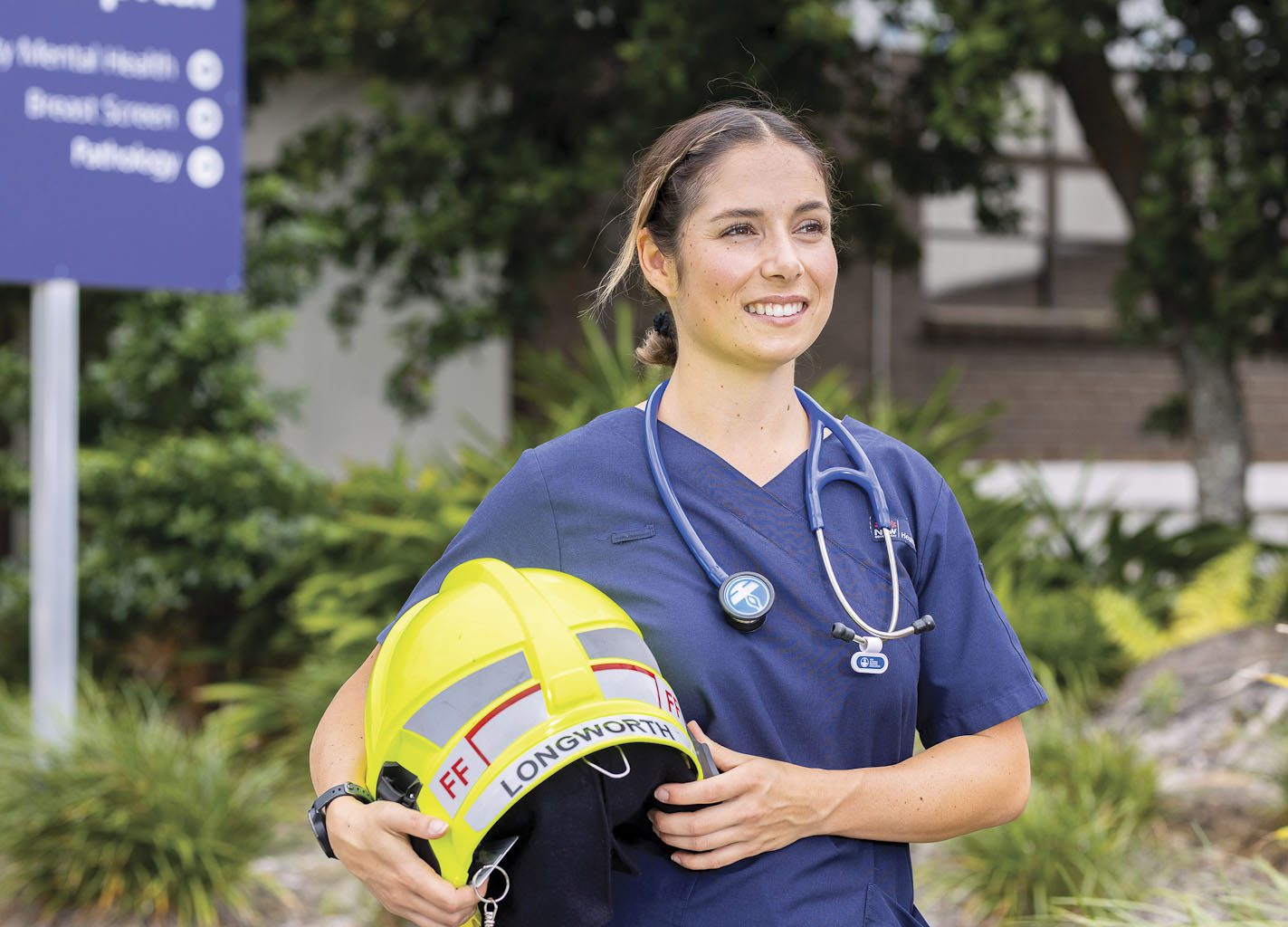 Caring for elective surgery patients through to heart attack survivors – Sophie says her role in the surgical ward is incredibly busy but rewarding.

“Part of our role is being the first person the patients see before surgery and we’re the ones who assist in their recovery once they’ve returned to the ward,” she says.

“Some have never had surgery or have come through emergency and are really scared, so as nurses we do our best to make sure our patients are comfortable and knowledgeable so they can make educated decisions about their health while being in our care.

“The nursing staff I work with daily are amazing – from my co-workers to my nurse unit manager, I have learned more than I ever thought possible on the job day-to-day.”

She credits practical classes at University, led by experienced industry professionals, in preparing her to hit the ground running working in a busy hospital.

“At Southern Cross Uni, most of our lecturers were nurses from local hospitals who were able to give us so much insight into working in the wards, which was so helpful for placements and when we were ready to start applying for jobs,” she says.

“The practical classes were so valuable. The uni has state-of-the-art facilities, including labs that simulate healthcare settings, so being able to practice nursing skills on the simulation mannequins, with industry professionals as teachers, gave me a huge step up when it came to doing it on a real person.”

It was during her final year of uni that Sophie’s friend Cyndell, now a fellow Southern Cross nursing graduate, invited Sophie to join Fire and Rescue NSW. 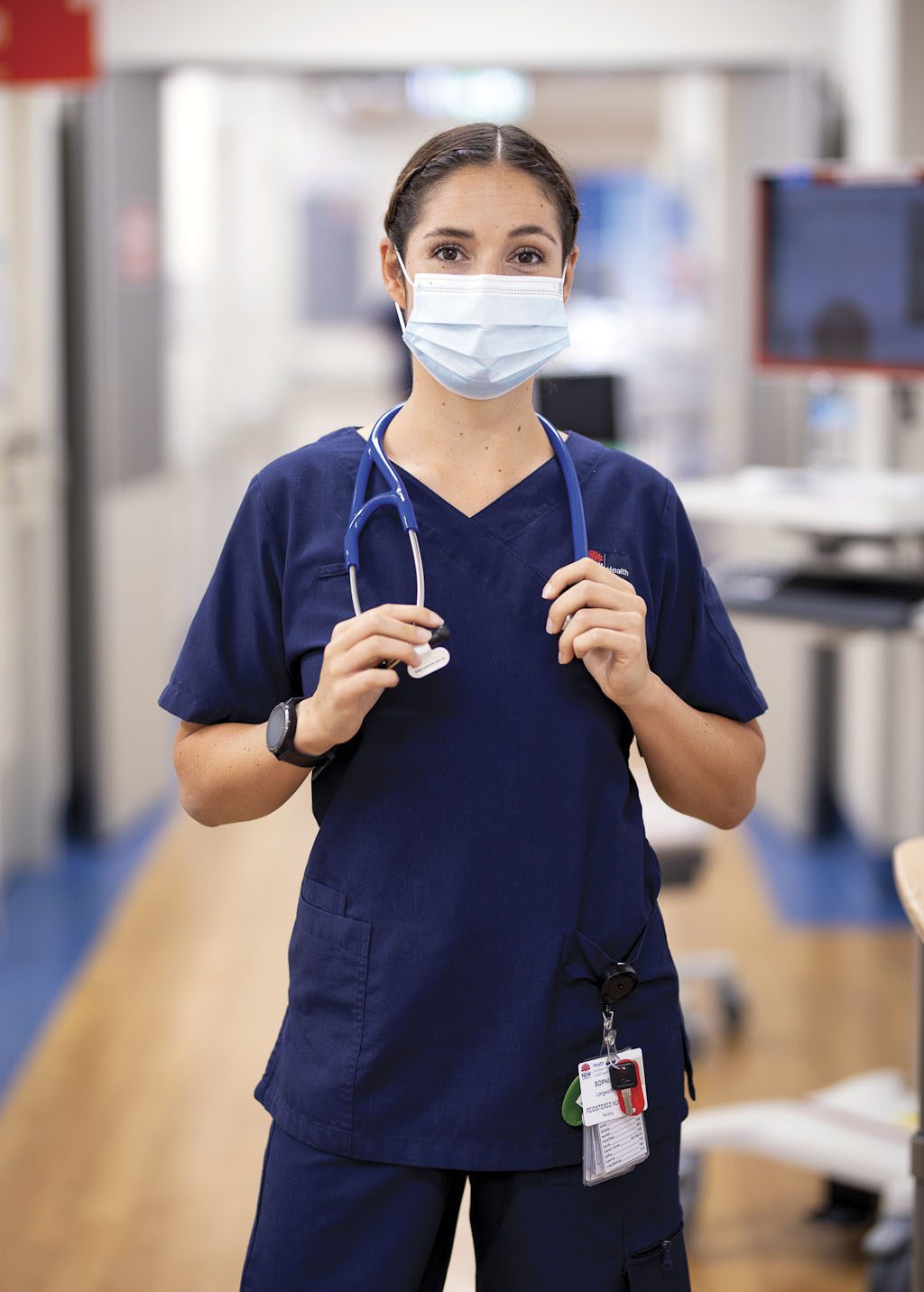 “I’d always had an interest in emergency services and wanted to do what I can for my community – plus I thrive under pressure – so I showed up, did the interview and physical tests, and was recruited.

“I initially thought it would just be a fun thing to do on the side when I’m not on a hospital shift but it’s become an important part of my life. The people I’ve met and experiences I’ve had have been such a highlight. We have regular training to make sure we are physically ready and maintain our skills for whenever we might be called upon.”

So how does a multi-talented frontline nurse, firefighter and life saver balance her active service with valuable self-care?

“I’m really learning time management and even though I have multiple jobs that I love, I’m also making sure I have time for myself and my family and my friends,” she says.

“It’s about acknowledging when you need to take time out. It’s all good to keep busy, but if you don’t look after yourself first, you’re not going to be able to look after anyone else.”

Sophie says her go-to self-care activities include hitting the gym almost every day and taking walks with her dad and her “gorgeous” rescue puppy Bear.

“Bear is such a lovable teddy bear. He’s a mixed-breed pound puppy that we got about five years ago. As soon as you sit down he jumps up into your lap and wants all the love – and he’s not afraid of getting out in the ocean with me as well,” she says.

“Even when I’m busy between shift work, training or volunteering I often take five minutes to head down to the beach to just enjoy the day.”