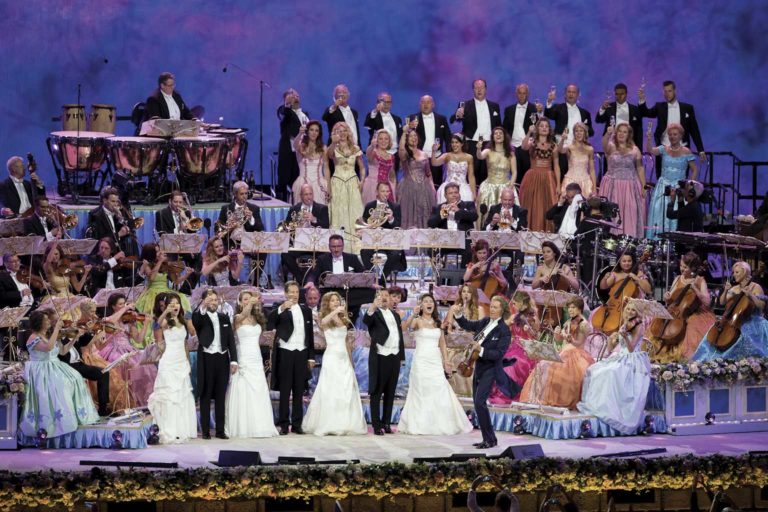 ORM is thrilled to bring this Q & A spotlight on global violinist and conductor André Rieu. Rieu, often referred to as the ‘King of Waltz’, was in Australia to record a one-off concert at Sydney’s iconic Town Hall in November during his Australian tour. He’s one of the highest-selling artists and his filmed concerts have also made him a box office hit, with millions of fans across the world. 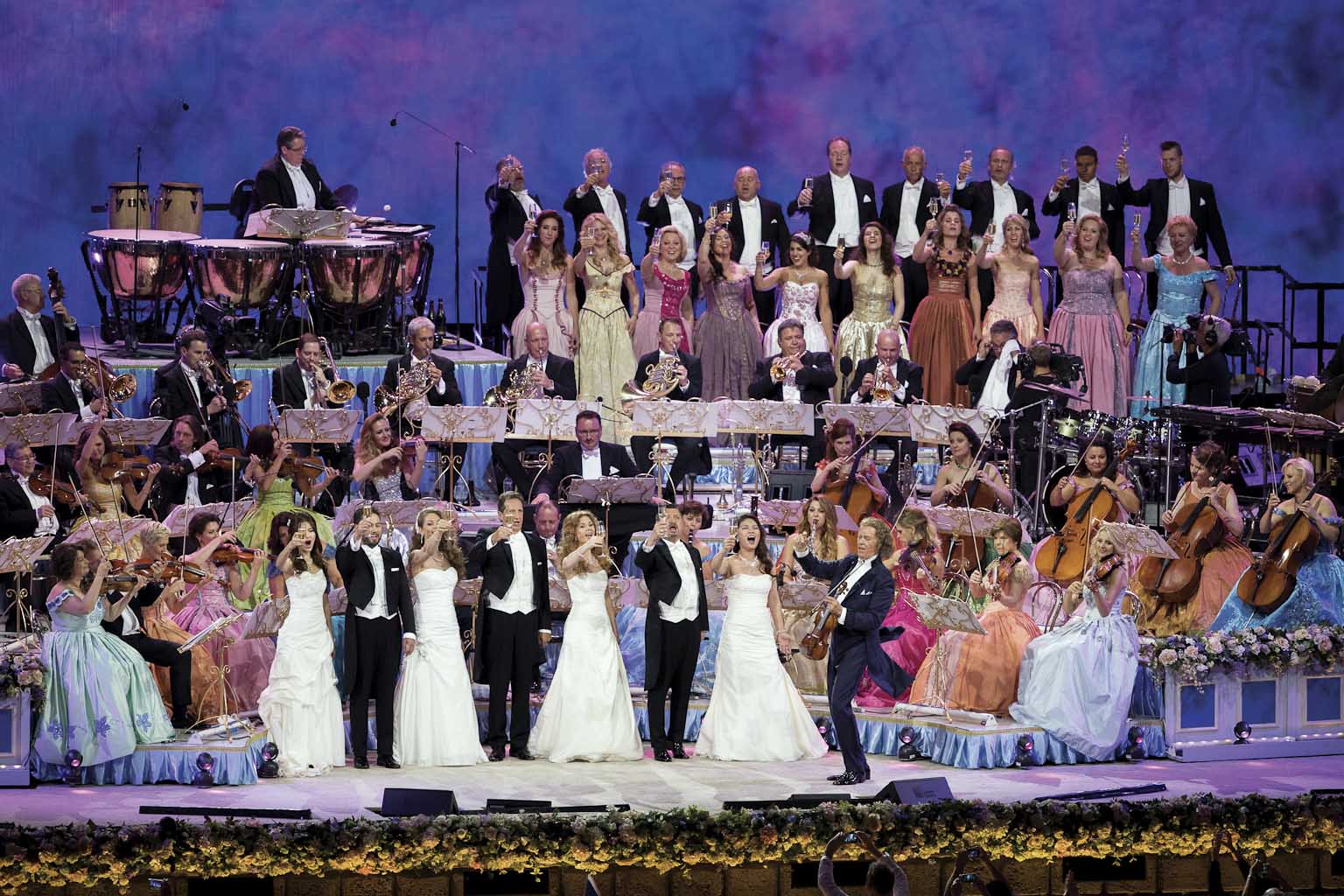 You come from a musical family and at the age of five you began playing violin. Did you know then that you wanted to be a musician and follow in your father’s footsteps?

I was quite young indeed when my mother (who chose all the instruments for her children) took me and my brothers and sisters into her husband’s concerts. During those concerts, I witnessed several wonderful things. There was the simultaneous movement of the bows of the violin players: it was like magic! The stick my father held in his hand could easily pass for a magic wand, so why not? And he did not only enchant me, but somehow he put a spell on the audience too. I’ll tell you what happened. After the regular concert with, let’s say, a Mahler or Bruckner symphony, my father and the orchestra played a Viennese waltz. Suddenly, the men and women in the audience began to move a little bit to the left and to the right. I was gobsmacked! Could there be anything special in the music, some secret ingredient that made the people move? Years and years would go by, and it was at my period at the conservatoire while playing a waltz that I discovered the immense power of the 3/4 rhythm.

Growing up, what was it like for you at school and being one of six siblings at home?

Families with six children were no exception then, especially when one is born in a Catholic family. As I was the oldest son, it was obvious that I would carry my father’s name — there is André Rieu senior (my dad) and André Rieu junior (me), just like Henry Jones senior and Henry ‘Indiana’ Jones junior! I’ve always been a little bit of a dreamer; sometimes, on my way to school as a toddler, I forgot my lessons and watched lovely ducklings in the city pond of Maastricht [in the Netherlands]. They captured my attention, and then I did not go to school. Don’t worry, I did finish primary and high school! But my parents were very strict. Only classical music was allowed; I had never heard of the Stones or the Beatles as a young man. All my brothers and sisters played several instruments and all of them became musicians.

Who have been the most significant mentors in your life? What continues to inspire you?

I’ll have to mention two of my violin teachers. Herman Krebbers, former concertmaster of the Royal Concertgebouw Orchestra, who passed away last year. He was my big example; I wanted to be like him. He taught me never to lose the fun of playing your instrument. Of course, regular practice is quite important, but laughing and having fun is important as well.

My other mentor/teacher who I have to mention is André Gertler. He was a very talented violinist. During my study years with him at the Brussels Conservatory, I wanted to quit my education and start a pizza restaurant with Marjorie — we just met, got engaged, and started making plans for a pizzeria. The main pizza would be the Pizza Paganini: when ordered, the chef (me) would come out of the kitchen and play a nice piece on his instrument. But that meant I had to study again. I came back to Monsieur Gertler and he was amazed: “What happened, André, your style has improved so much!” Then, the rest — as they say — is history. Both of them were wonderful teachers and they continue to inspire me every day.

What’s the greatest risk you’ve ever taken in your life?

In 2006, I played in front of the Schönbrunn Palace in Vienna, the setting to play Johann Strauss’ astonishing music. Then I decided I wanted this as a stage to travel around the world with. Nearly one and a half years later, three replicas were made. I also added fountains, a golden carriage with real horses, hand-painted ceilings, and so much more! This huge step and risk almost left me bankrupt, but I had to convince the bank everything would turn out fine. It did! The first tour where I performed in front of this Schönbrunn replica was in Australia and I have the most wonderful memories of those concerts!

This year marks 32 years since you formed your Johann Strauss Orchestra. Describe the early days of the JSO and how it has grown over three decades.

Back in 1988, I started with the Johann Strauss Orchestra — 12 young musicians, all dressed in black (the ladies too!), who toured in the Dutch theatres with me. We shared the same dream: to let the world dance and get the people acquainted with the waltz. Slowly, other countries could be added to our touring list: Belgium, Germany, England. Meanwhile, more than 60 men and women are on stage with me. The Johann Strauss Orchestra is the biggest private orchestra in the world, and all the members still share that special dream. The ladies don’t wear black anymore; their gowns have all the colours of the rainbow, which I love to design myself. 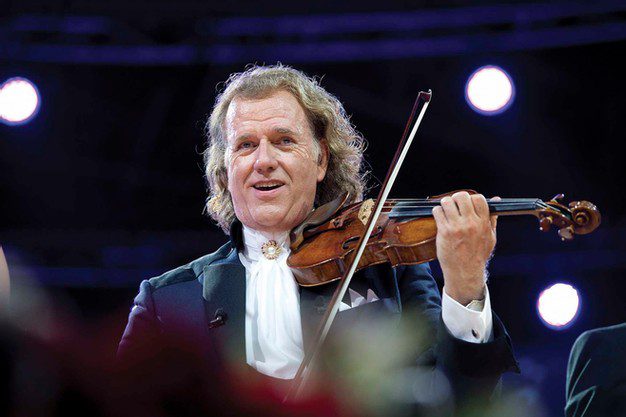 When you’re not working, what do you love to do?

Reading, walking on the St Pieter mountain behind my castle, spending some time with my grandchildren. I call them my small family, because the big family is my orchestra. Work and private life go hand in hand. I discuss everything with my wife Marjorie: family life, programs, new repertoire, new albums. We’ve just made a new record, Romantic Moments II. We choose songs like ‘Sunrise Sunset’, ‘Strangers in the Night’, ‘El cóndor pasa’ while being at home together. We do not see this as work — it’s fun.

What other music do you enjoy? Who is on your wish list of artists you would like to invite to perform on stage with you?

For years, I have been an enormous fan of Bruce Springsteen. I really admire his energy; the way he jumps on stage is incredible! Although ‘Born in the USA’ and ‘Dancing in the Dark’ are already older hits, I think they are timeless. It would be a great honour and joy to perform with him!

Never give up your dream and never lose hope. Walt Disney once said, “If you can dream it, you can do it!” He was right. Of course, it will take a lot of hard work, and criticism will come by every time, but just try to make the best out of it.

When you look back on everything you’ve done, are there some highlights that stand out?

Being able to live my dream is a genuine highlight for me. Maybe I’ll mention my hometown Maastricht summer concert series. We started this tradition back in 2005 with three concerts in July, held on the medieval Vrijthof Square in my beautiful home town. The upcoming summer of 2019 will be the 15th edition — with 12 concerts! People from all over the world come to my home town; last year there were 90 nationalities! Isn’t that great? I am really proud of this. And then many more people see the Maastricht concert in cinemas around the world.  I hope I’m able to do this for many years to come!

If you hadn’t become a violinist, conductor, and entertainer, what would you have liked to be or do?

An architect, absolutely! I love to see how buildings are constructed — something else I liked to watch as a kid. That’s why I like to be in Rome every year — to see the ancient architecture that managed to survive so many centuries. I made many drawings when I was young. Maybe that’s why my oldest son Marc is a landscape painter, who knows!

André Rieu’s 2019 Maastricht Concert in cinemas will screen in late July for one weekend only (details at andreincinemas.com). André’s new album Romantic Moments II is out now.