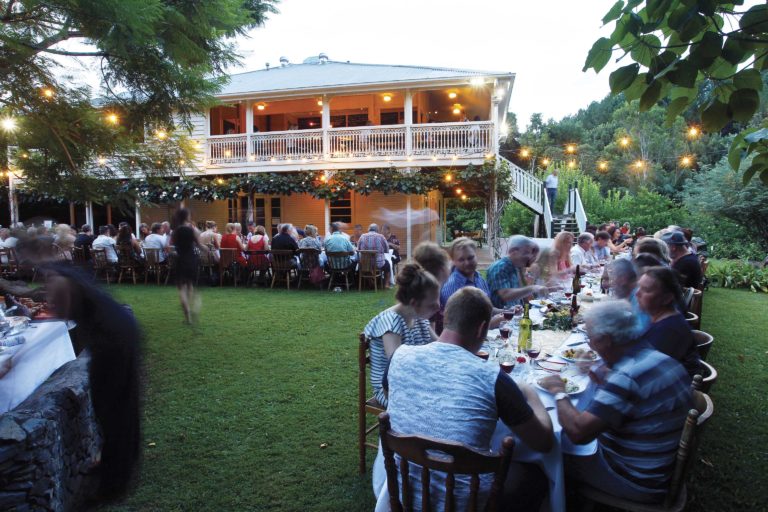 Under normal circumstances, when Editor-in-chief, Brian ‘The Wolf of Wall Street’ Usher wants me to write something, he begins by inviting me to dine at Hellenica in Nobby Beach. He fills me with the gourmet Grecian take on tucker and the foodie afterglow seduces me into promising something I wouldn’t do for anyone else.
I call him ‘The Wolf of Wall Street’ because he offers me assignments with insanely good perks.
You see, the Wolf will only eat splendid food. Splendid food. The food he eats is… splendid. 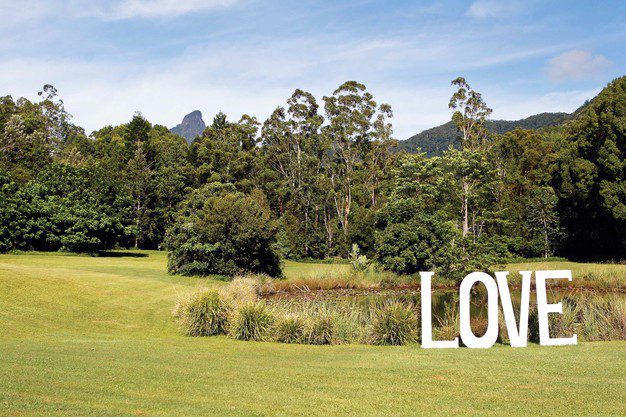 (I’m just trying out my newly minted ‘Trump speak’. Why not? It worked for Donald. It feels weird though; like I’m walking a mile in someone else’s thongs).

When you say yes to the Wolf’s assignments you know you’re going somewhere worth living for and eating food worth dying for.

You’ll dine like you’re in a King’s daydream and so it was at Mavis’ Kitchen long table banquet.

The Wolf knows trying to get me moving is like trying to get water to run uphill. Yet, somehow, this time, he’d worked out he wouldn’t have to go too much trouble.

With this soul food destination and a display at Tweed Gallery that I’m uniquely connected to, the Wolf preyed on me like the apex paragraph predator that he is.

By dangling a glazed carrot from a beautiful Northern NSW Long table banquet the Wolf knew he could once again entice me down the Ocean Road.

I’m heading to my favourite part of the world to indulge one of my great loves, art galleries, and the combination was a heady mix of memories, memorabilia and Mavis’ Kitchen.

First of all, Mavis’ Kitchen is nothing short of a Shangri-La like experience. 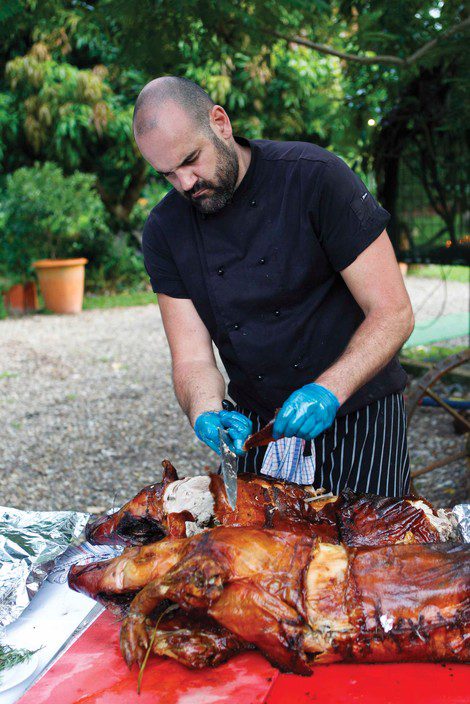 There’s a genuine spirit of place there.

Nestled in a nook of a valley gawking up at Mount Warning. It’s dead-set where troubles melt like lemon drops.

Something grown in Mavis’ fertile gardens goes out on every plate of food so you can literally taste the place.

Sadly, they only serve that evening’s sumptuous feast to one table. Happily, that table is 50 metres long and about a hundred people sat for what turned out to be a warm, openhearted, completely enjoyable experience.

I’m happy to say there are more events like this in the planning stages for Mavis’ Kitchen so google it and giggle as they say in the bible.

The chilled, nurturing mood of the place is generated by the owners, Peter & Charlie who make you feel like the prodigal son’s fattened calf is being slow-roasted for you and you alone.

Where these two men are concerned, one provides the heart, the other the soul of what is now my favourite country retreat.

When the restaurant is your childhood home relocated to a hand picked spot in the country, surely all the love you need is already in the building.

I arrived at the banquet and saw the long, long, long table, a hundred grinning people milling about cupping icy, rainbow colored drinks under a string of lights in one of the most beautiful gardens I’ve ever stood in. I got the feeling I’d stumbled into the final scene of a great Hollywood romantic comedy. What a great date night it was. Incredibly romantic.

As everybody took their seat, there was a buzz that sounded like a teenage girl’s slumber party and it proved thoroughly enjoyable.

The sun sagged and conversation came fast and easy.

We met a young woman off to dance professionally in Japan, she met two blokes who warned her of the pitfalls. All along the table people were connecting at a quantum rate and at the risk of sounding like a hippy without the hair, it was cool, man. 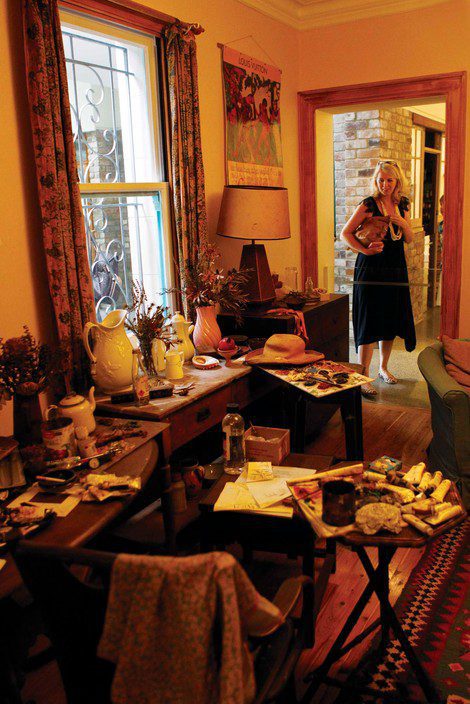 The guy sitting opposite me was a great raconteur and ran such a successful business he begged me not to mention it in Ocean Road.

Everywhere conversation bubbled between strangers and it was magic.

I knew the food would be great but I just didn’t expect such a series of good chats and a good chat feeds your mind as surely as a banquet does your body.

The accommodation deserves a special mention. We stayed in the Farm House and our wives arrived a couple of hours before us.

As I walked up the stairs onto the giant verandah with a tree growing through it melding nature and nurture, I heard my wife say “Watch his face, Sean will absolutely love this place.”

I’d go back in a heartbeat.

We had a great night full of big belly laughs. A monster of an evening in fact, a delicious late breakfast washed down with an extremely well made Bloody Mary. Then we were off on a 10-minute drive down the Ocean Road to the Tweed Art Gallery where I encountered a series of staggering coincidences that boggled my mind.

Thank whichever god is responsible for such things because Mavis’s kitchen also runs the café in the Tweed Gallery. It has breath-taking views of Northern NSW and the Border Ranges to absorb while devouring a plate of macadamia encrusted Barramundi I won’t soon forget.

We learned the gallery is on land donated by my Dad’s much loved former boss, ex-Deputy Prime Minister, Doug Anthony.

I remember being so proud as a kid that my Dad, Peter Flanagan, the man with no middle name, helped the deputy PM run the country.

I met Doug Anthony a few times back then. He was a charming, gentle giant who made me feel incredibly welcome in the second highest office in the land.

It’s completely unsurprising to me that Doug would be so generous to donate that land providing the most beautiful setting for an art gallery that I’ve ever seen. 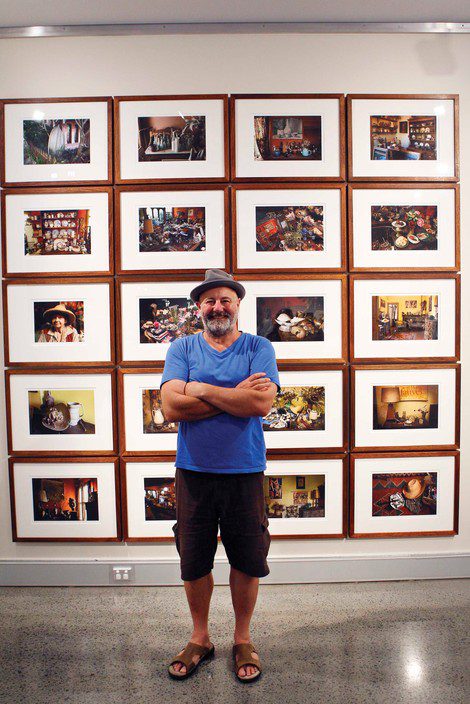 There are many intriguing works in the Tweed gallery, not the least of which is the masterful re-creation of Australian Art Royalty, Margaret Olley’s house.

After Margaret Olley sadly passed, everything in her home was painstakingly removed and faithfully reproduced in the Tweed Gallery. It’s brilliant.

You can literally see how a true artist lived and worked. She didn’t use easels because she was infirmed. She sat to paint.

In fact, there were paintings everywhere, leaning up against tables and vases and chairs and piles of books on chairs because she wanted to read them and the shelves were hard to get at with a walking frame.

Her kitchen is even there. Her fridge. Her everything. Her daily life is there for all to see.

However, I had already seen the inside of her house once before during a chance meeting I now treasure.

I’d been to enough exhibitions to have met Margaret Olley. She was easy to meet because she loved a ciggie. I smoked in those days and will confess to having shared a few gaspers with her.

I will also confess I didn’t really know who she was back then.

I thought she a gruff punter keen on paintings, she certainly did not give the impression that she was a living National treasure.

One stifling hot summer day, I drove past an aged Margaret Olley with white plastic bags full of shopping clasped in each of her gnarled hands. She was struggling to shove her metal walking frame up a steep Sydney street a laborious 6-inches at a time.

I pulled my powder blue HR Holden station wagon up right next to her and said, “Hey Marg, you wanna lift home?”

She stopped shuffling, glared at me and said, “Are you gonna kill me?”

I drove her about 60 metres to her home, a trip she said would have taken her 20 minutes. I offered to put her shopping in her fridge for her while she sat in the car reasoning, “that way we won’t be alone in your house together and I can’t murder you.”

She laughed loudly, handing me her house keys and her shopping.

I still hadn’t twigged that Marg was Margaret Olley and I’m so impressed that she didn’t feel the need to say so.

It was somewhere between the fridge and the front door that I figured out who she was.

I put Margaret Olley’s shopping in the fridge you see today at the Tweed Gallery and only now do I realise that at $80,000 a painting I stepped over about half a million dollars worth of art carrying tinned beetroot, bread and milk in fragile plastic bags from Woollies.

Visiting Mavis and Marg in one weekend was amazing.

See you somewhere soon down the Ocean Road.