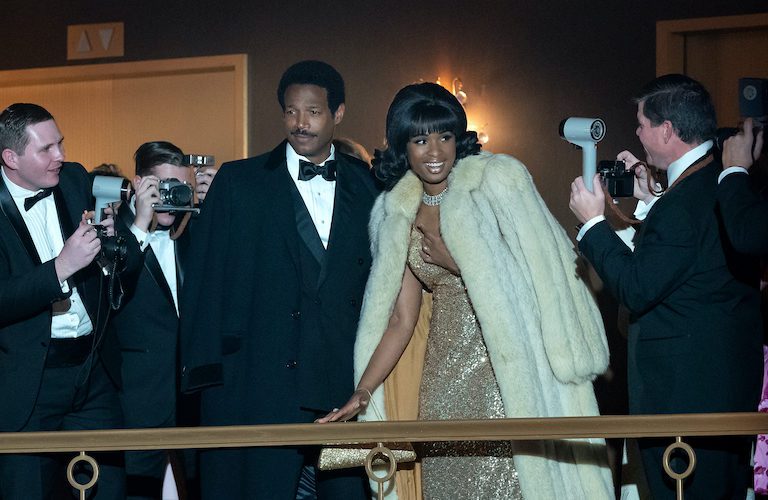 This is the film most of us have been waiting on ‘RESPECT‘ which has been in development for years with singer-actress “Jennifer Hudson” who by request of Aretha Franklin wanted her to portray her on-screen and was involved with the development up until her death on August 16, 2018.

Liesl Tommy director of the film has produced storytelling of one of the most remarkable women of our time that begins with Skye Dakota Turner, who plays the young Aretha in the early scenes of “Respect.” Playing her parents are (Forest Whitaker) as Rev. C.L is brilliant in this, with Audra McDonald. Clearly we see at such an early age the abuse she was under, and the loss of her mother to then bear the controlling father, and first husband bashings throughout her growing up and in aim to find her voice literally to speak up on what she wanted.

Jennifer Hudson gives such a powerful performance and this film somehow delivers lots of sadness as to her struggle until she finally goes back to her roots with the Gospel Church singers that were recorded in 1972 at Los Angeles church to record Franklin’s biggest album, Amazing Grace. This was filmed for a documentary that sat unfinished for almost 50 years before its world premiere in 2018. Not seen the film, I suggest you get to it as it combines what brings Aretha back to being more connected to her music roots that gives her spiritual strength and faith that shapes her, to her brilliance as a singer-songwriter and human being she was!
The scene alone of Hudson singing Amazing Grace is outstanding to watch to the final scenes of the film where it does take you to the real actual stage event at the Kennedy Center where we see the lady herself belt out a song for songwriter Carol King classic “You make me feel like a woman”.

It brought tears to my eyes and sheer joy to watch this woman of soul and know that her voice and music will never die, and this film brings justice on all accounts in respect to the Lady of Soul Aretha Franklin. Jennifer Hudson in the last two weeks before Aretha died was still able to speak with her and was one of last to speak with her stated this week, Jennifer says it was a great honour to be able to play her and again her role deserves big gongs all around.

Some of the highlights in this film raises the times of history and her closeness to Martin Luther King and the sadness of those times as to loss there and effects on her family.

The film’s soundtrack will feature one original song, “Here I Am (Singing My Way Home)”, performed by Hudson. Written by Hudson, Carole King, and Jamie Hartman and produced by will.i.am, the song was released on June 18, 2021.