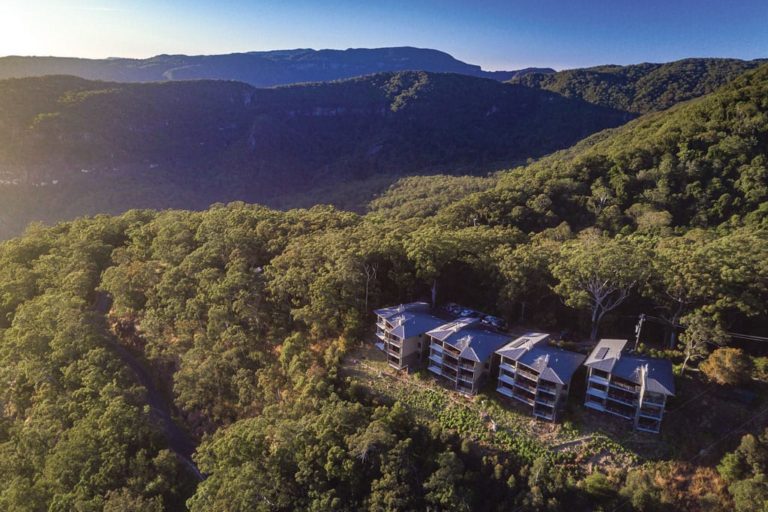 A YEAR since devastating bushfires tore through the Gold Coast Hinterland; iconic Binna Burra Lodge has risen from the ashes…

While the September 2019 fires tragically razed the historic main Lodge and cabins, built by eco-tourism pioneers Arthur Groom and Romeo Lahey in the early 1930s, visitors are now flocking back as the property’s other accommodation offerings and attractions reopen.

The stunning Sky Lodges and Binna Burra campground, with their breathtaking views over the verdant Numinbah Valley down to the Gold Coast and Brisbane, are again welcoming guests. 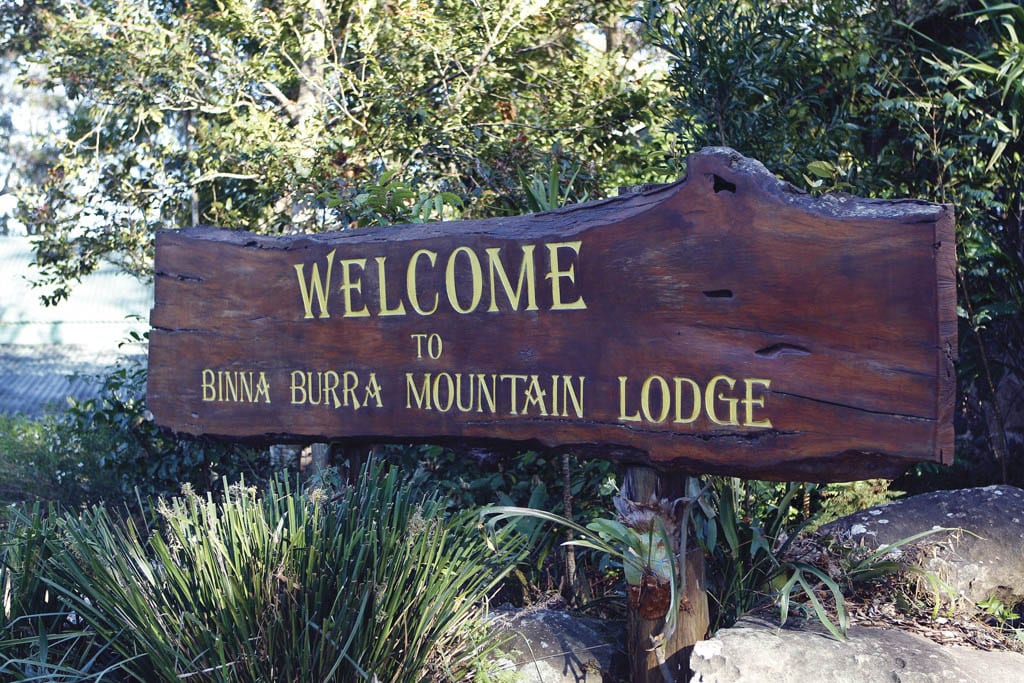 The famed Tea House has undergone a magnificent facelift, while the rustic, 84-year-old Groom’s Cottage has been converted into the Bushwalkers Bar and Cafe.

And nine of the 14 walking trails in the World Heritage-listed Lamington National Park, for which Binna Burra has been the gateway for decades, have also reopened – allowing visitors once again to experience the wonders of the ancient Gondwana rainforest.

The road to Binna Burra, which was severely damaged in the ferocious fires, also recently reopened better than ever after an impressive $35 million rebuild. 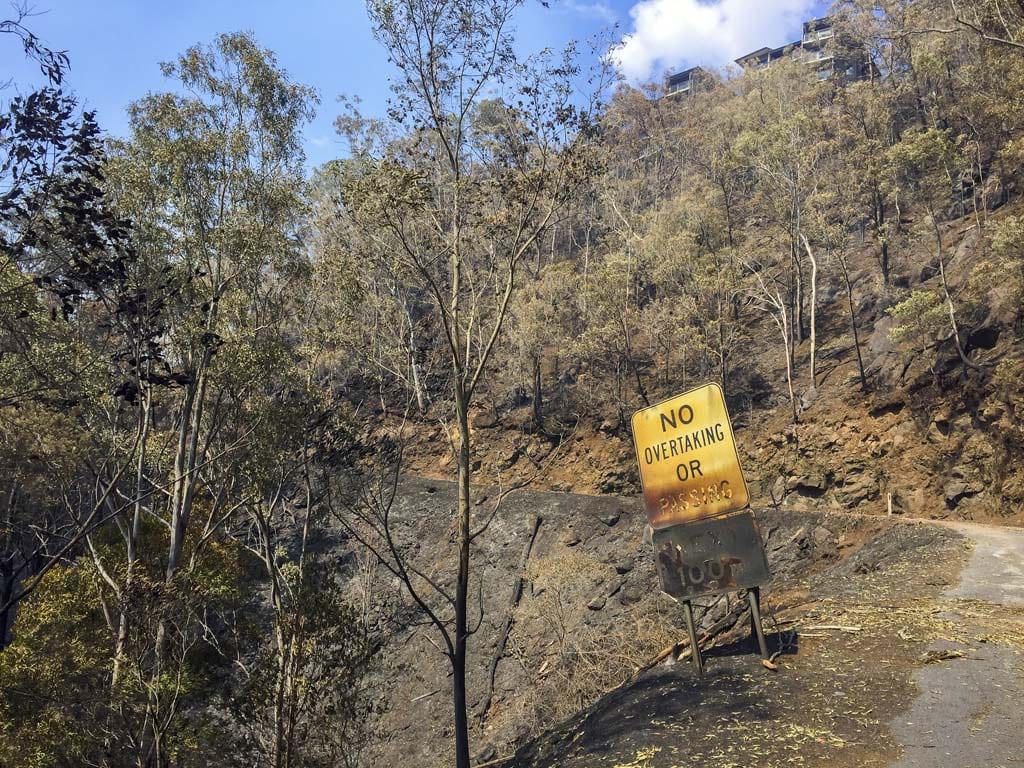 And new attractions, including a  multimillion-dollar ‘Via Ferrata’ (mountain climbing path), are being added as the Lodge returns to its former glory.

It’s been a long and arduous road back for Binna Burra, but staff left heartbroken after the fires are smiling again as accommodation bookings boom and day-trippers return.

“As soon as we announced the reopening of the Sky Lodges, we received bookings for a record 2000 room nights in the lead-up to the September school holidays,” Binna Burra CEO Jonathan Fisher says. 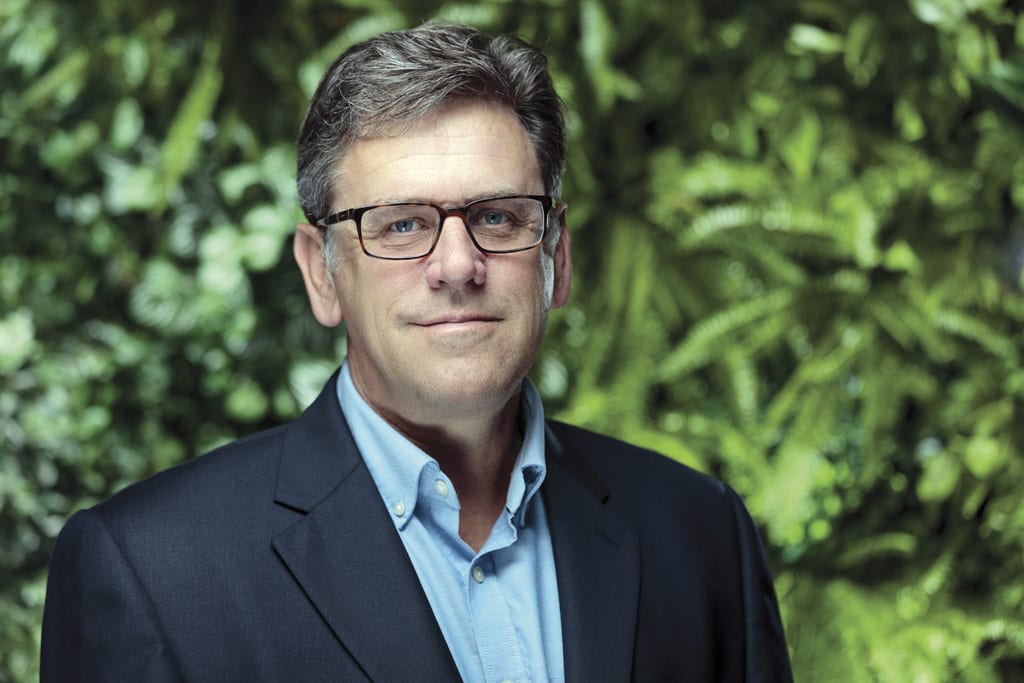 “The response has been incredible, from both long-time devotees of Binna Burra as well as first-time guests and day visitors.

“Binna Burra holds a special place in the hearts of many people from across Australia and around the world, and the bushfire devastation left everyone shattered.

“But the same indomitable spirit that drove Arthur Groom and Romeo Lahey to establish Binna Burra almost 90 years ago is alive and well today, and we’re open for business and welcoming visitors back.”

Binna Burra was a hive of activity when Ocean Road visited in early September, with an army of workers putting the finishing touches to the Tea House renovation.

The symbolism of Binna Burra’s remarkable recovery is evident on the scenic drive up from the Gold Coast, with trees left blackened by the bushfires sprouting new green foliage.

Our visit coincides with the first anniversary of the fire, with rural firefighters who bravely battled the towering flames among guests at a commemoration ceremony in a special Bushfire Gallery established in the old stone barn on the property.

There’s tea and tears as staff and locals remember one of the worst days of their lives. 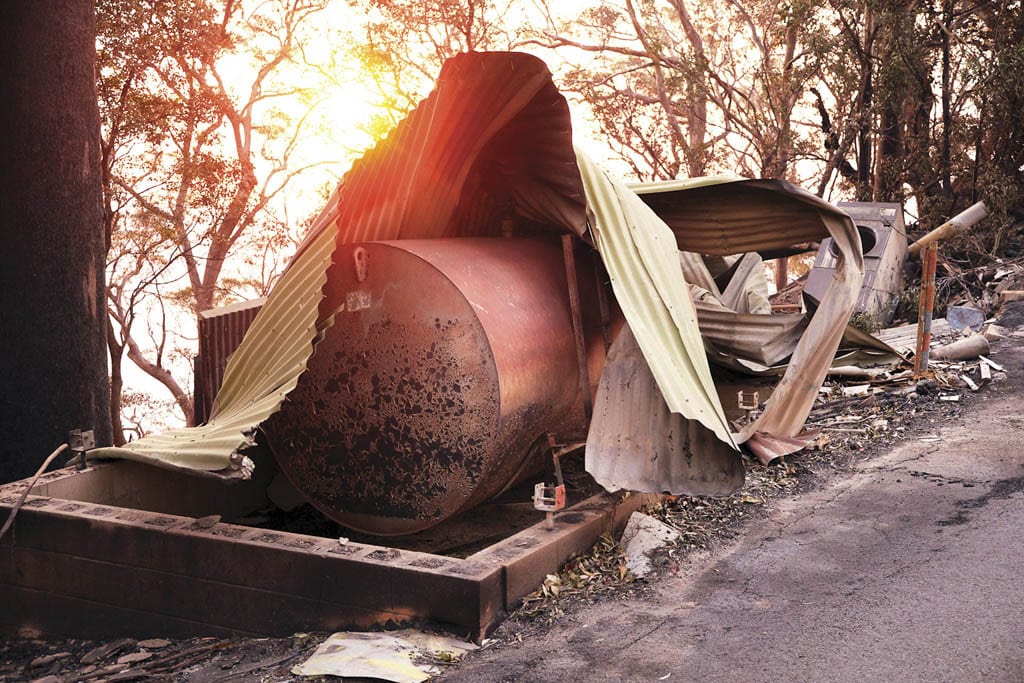 “We lost our family home (one of 11 destroyed at Beechmont in the blaze) … it’s more than just buildings gone, it’s all those memories. It can never be replaced.”

But Tony is clearly chuffed to see Binna Burra bouncing back from the disaster as he shows guests who have contributed to the recovery around Groom’s Cottage, where he lived as a youngster with father Arthur, mother Marjorie and brothers Richard and Don. 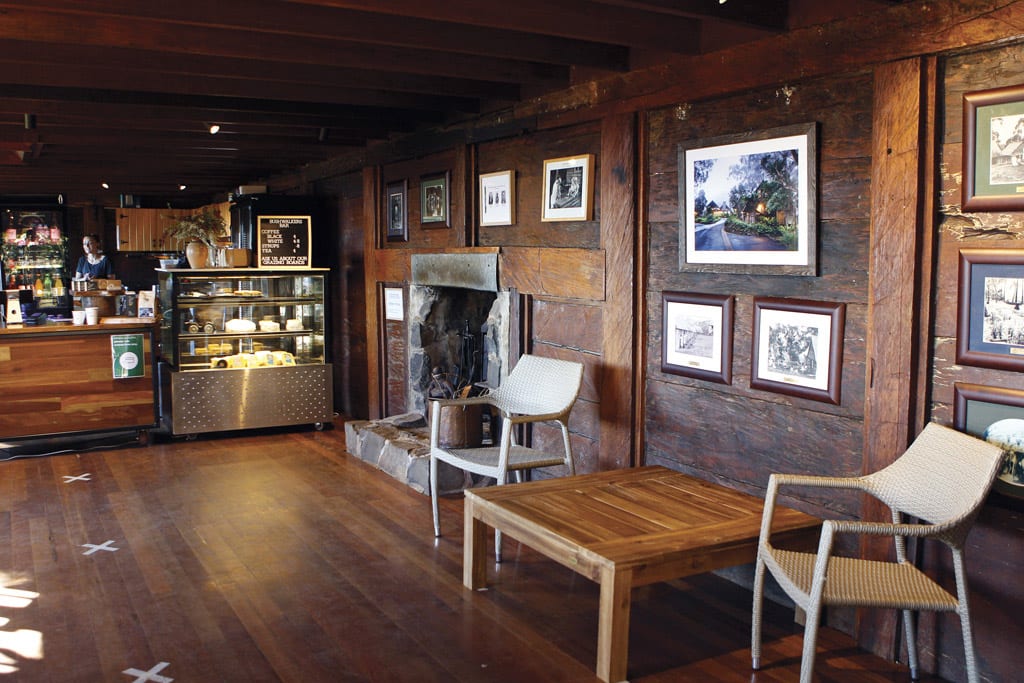 “A cow came wandering through the cottage one day and ate all of Mum’s best dresses,” he recalls with a chuckle.

“Another time, she found a tiger snake in her underwear drawer. Dad got a panicked call on the old phone we had.”

Saved by aerial water bombers, the old timber cottage has been transformed into the Bushwalkers Bar and Cafe, with barista-made coffee, local Black Hops beer and Carafe Wines from the Yarra Valley on tap and delicious food from local suppliers the Scenic Rim Farm Box with which Binna Burra has established a partnership. 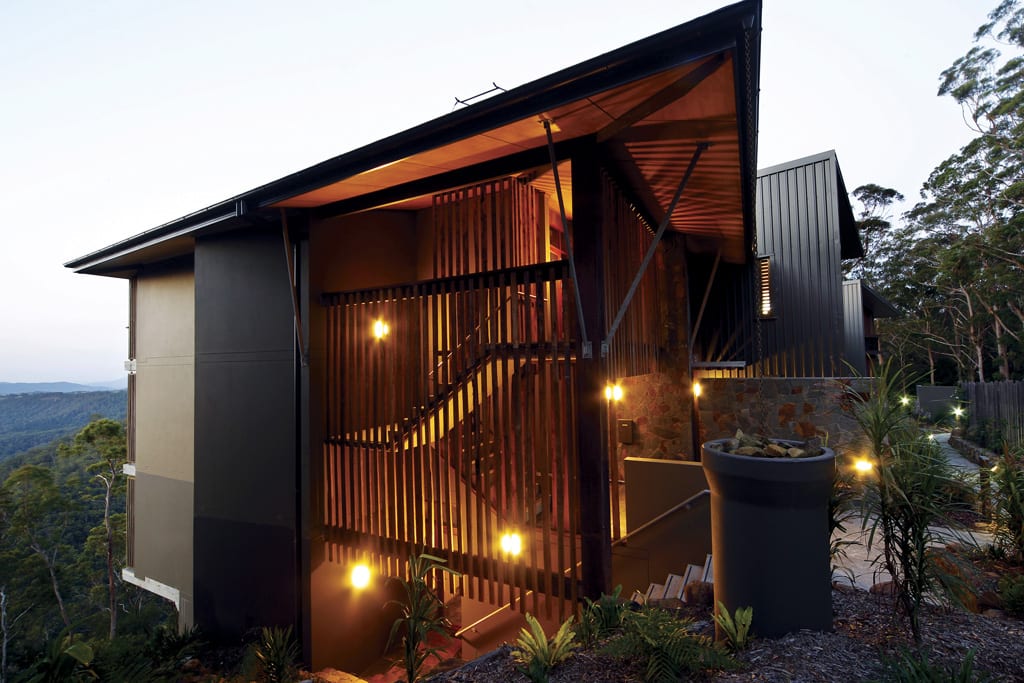 The Scenic Rim Farm Box will also supply the Tea House with ingredients including locally-made cheese and smallgoods for its extensive menu.

With an open fireplace, spectacular vistas to Advancetown Dam and the coastline and retail outlet selling indigenous art and souvenirs, the completely refurbished Tea House will fuel bushwalkers for their hikes and cater for overnight guests in the newly-renovated campground.

Boasting some of the best views atop Binna Burra, the campground features glamping-style safari tents as well as sites for BYO tents, caravans and RVs, a BBQ shelter with USB-charging facilities and newly-renovated amenities block. 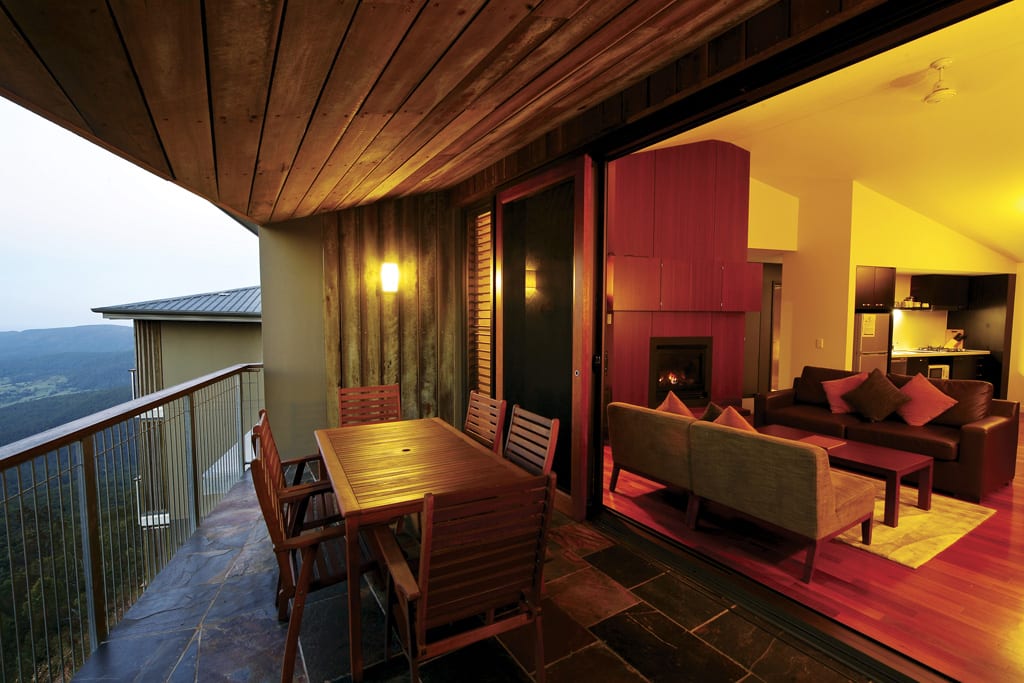 With jaw-dropping views over the Numinbah and Coomera valleys to the Coast and Brisbane, the Sky Lodges are a mix of one, two and three-bedroom luxury apartments appointed with all the mod-cons.

“You can sit on the balcony soaking up the views and do absolutely nothing or go on one of the beautiful bushwalks, from the 30-minute Rainforest Circuit through to the 23km Border Trail walk,” Binna Burra marketing manager Brad Cox says.

As Binna Burra chairman Steve Noakes observes, only about 10 percent of Lamington National Park was affected by the bushfires, and much is regenerating thanks to good rains this year.

Binna Burra’s green heart – the 21,000ha national park, a lush and tranquil home to almost 390 species of Australian wildlife and some of the most diverse flora on earth – remains as strong and vibrant as ever.

Noakes says the main Lodge will eventually be rebuilt, along with the cabins, using materials including recycled timber salvaged from the bushfire. 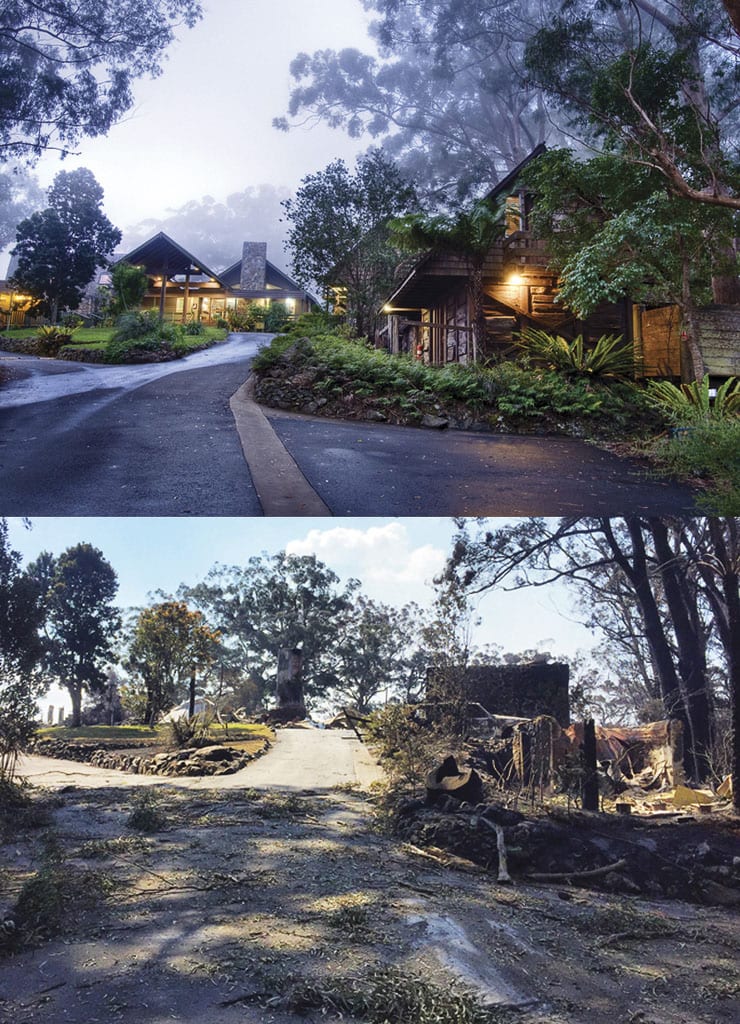 And when the Lodge is standing proudly once more atop Mt Roberts, one item will again take pride of place.

A 110-year-old bell, built for a locomotive that serviced the Lahey Brothers timber mill at Canungra in the 1900s, was the only thing to survive the fire which swept through Binna Burra Lodge and still rings loud and clear.

“The bell is a symbol of Binna Burra’s resilience,” says Noakes.

The enduring essence of Binna Burra might best be summed up by an Instagram post from one of the first guests to return since the bushfires.

Beneath a photo of herself admiring a sublime sunrise over Kurraragin (Egg Rock) in the Numinbah Valley, she posted: “Binna Burra is very, very good for the soul.” 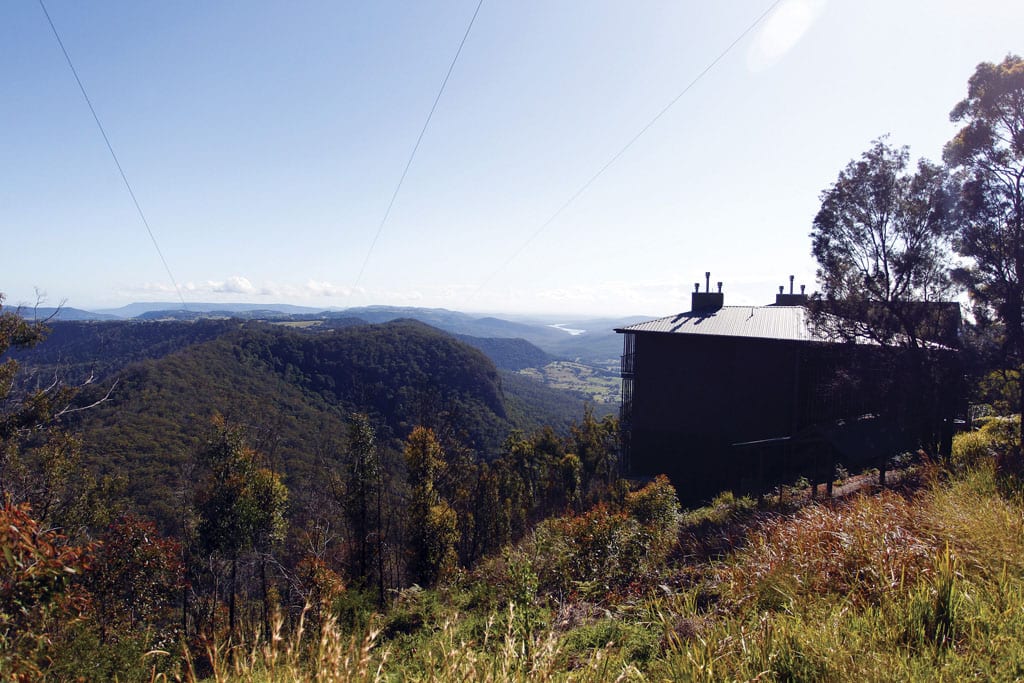