After the Lombok earthquakes: Answering the humanitarian call 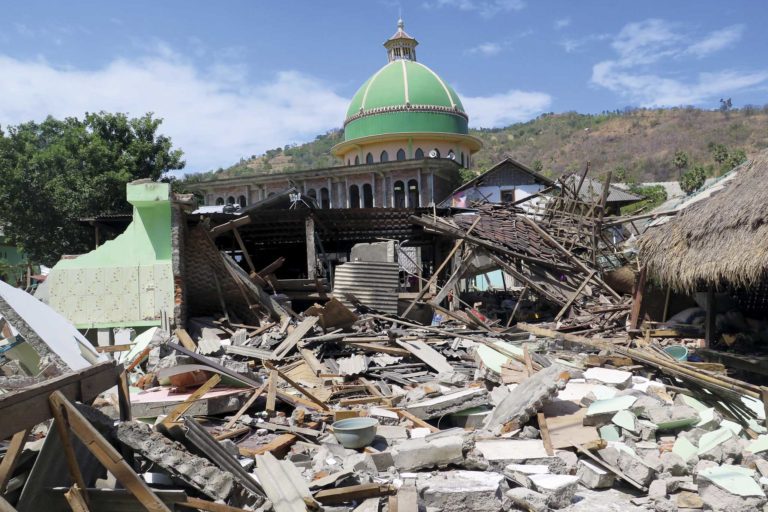 Travelling to the Indonesian island of Lombok 10 days after the big earthquake and five days after the third significant quake last August, Sam Beau Patrick was apprehensive. She had no idea what to expect and wasn’t too sure what she could offer, except that she had an urge to be there to offer help… 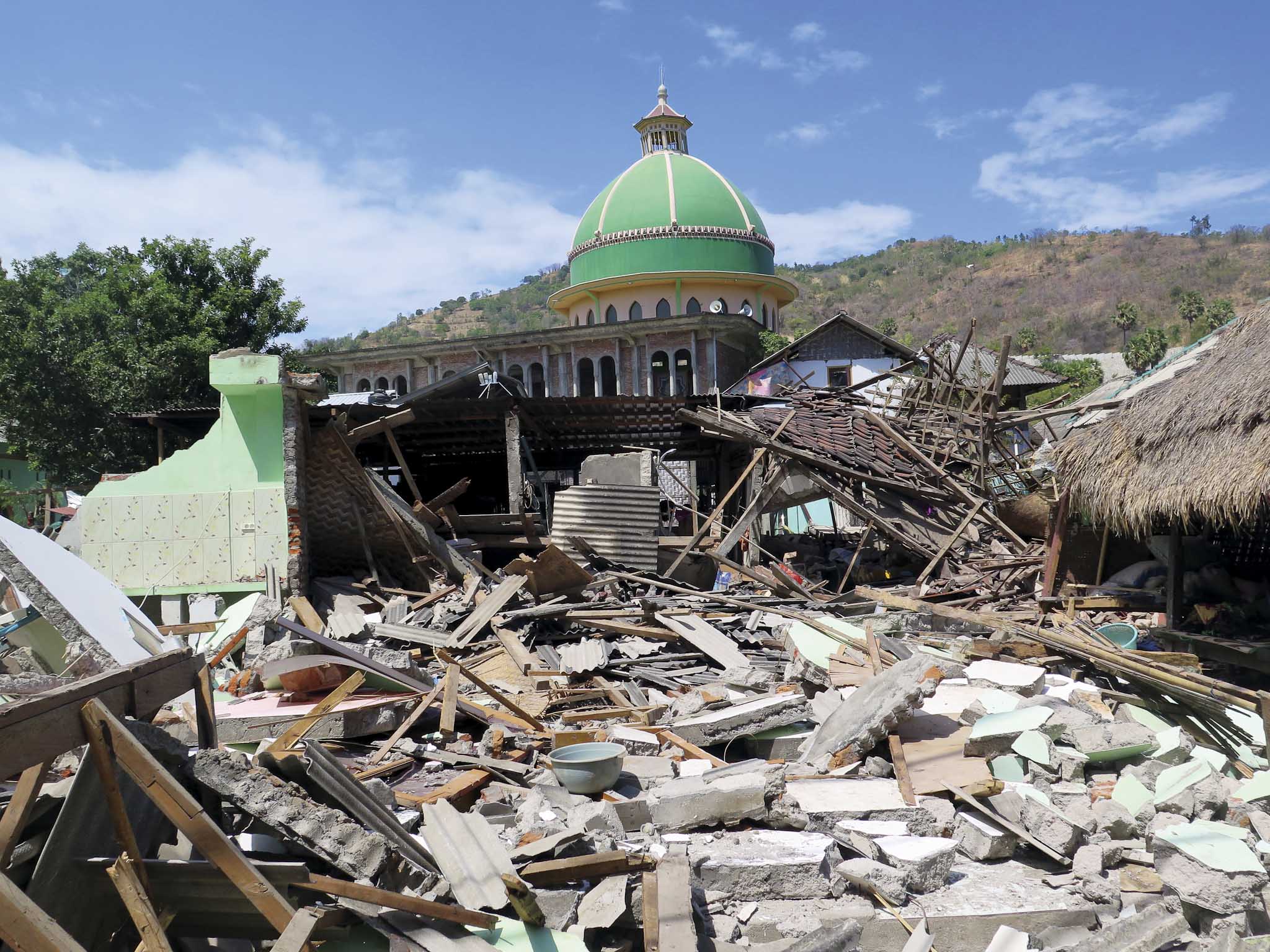 With a major charity drive going on in Australia to support our farmers at the time of my departure to Lombok, many of my friends felt my efforts were going in the wrong direction and were high-risk.

I reassured them that I did support our farmers and believed that the best way to do this was through shopping at local markets and independent butchers. This was a humanitarian call — one I had to reply to.

So off I went, a sole female traveller from the Gold Coast. I knew it would be tough. My driver in Bali put me in touch with his friend, Dani, who would be my driver in Lombok. Dani invited me back to his village after gaining consent from the village chief. I was to spend a few nights on the still-trembling earth in his village behind Senggigi Beach.

More than 250 people were living under tarps in his village. They were some of the 600,000 people who had been displaced without their homes and were living in emergency shelters. Many of the buildings in the north had fallen to rubble with the vibrating earth. Estimates were that only 10 per cent of buildings remained upright.

The chaos and falling buildings had left more than 460 people dead and more than 70,000 homes destroyed. This is greater than the size of Toowoomba — all destroyed. 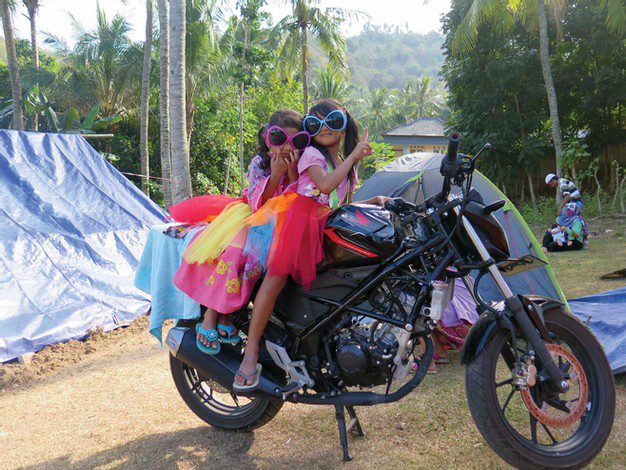 The massive human displacement, though, was the real issue. No electricity; no access to fresh water, sewerage, and food. I had taken my own supplies so that I didn’t add to the burden.

As I pitched my tent on the first night, everyone was intrigued. Who was this woman; why was she here? Every other Westerner had fled the previous week.

Curious people would approach me and be keen to connect. They kept telling me how their buildings were ‘broken’, and the distress was obvious in their faces.

“Yes,” I would agree, “they are broken.” The buildings were broken and so was the people’s confidence.

I had brought over some supplies and donations, the most useful being 2000 facemasks that had been donated by wholesale equipment supplier 3M. After dropping off the food to be distributed among the village, we headed north.

The seaside beaches and villages we visited revealed progressively more extensive damage the further north we went, until it was obvious we were in the thick of things. We would stop the car and I would distribute facemasks, goods, and food. 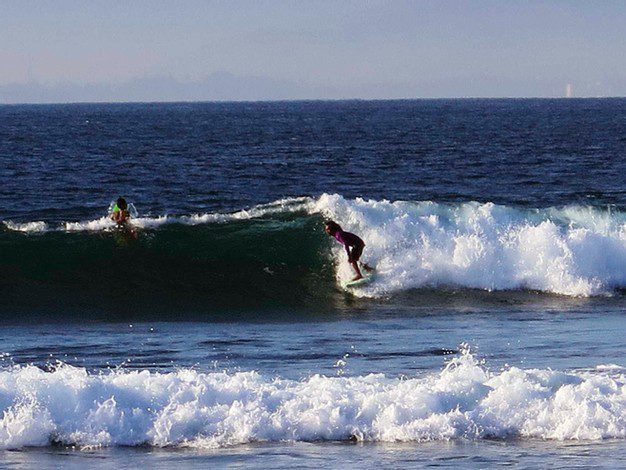 Handing out masks to locals shifting through rubble and coming to grips with the fact that their homes were destroyed was heart-moving. It was more than the mask that was handed out. It was a gesture that there is hope, that people do care, and that somehow among the rubble their lives would get back on track.

I experienced many wonderful moments in those interactions, despite the north of Lombok, including the ground, being fractured and broken.

That afternoon, my driver and I headed back to camp. I had brought over two clown outfits with a crazy idea that I would dress up like Patch Adams and make the kids happy and forget the trauma of the previous two weeks. 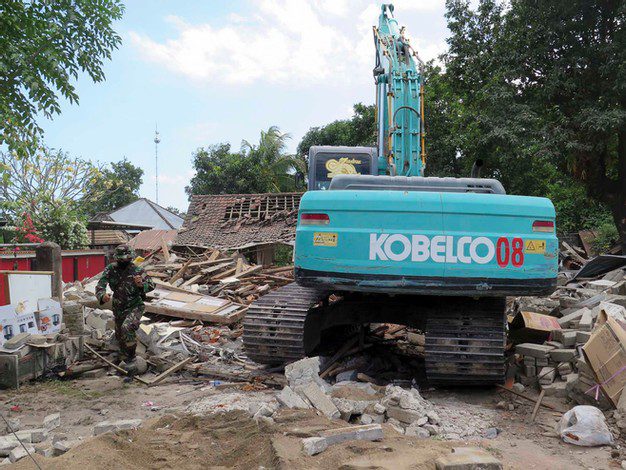 Uncertain but enthusiastic to cheer up the kids, the clown idea was a hit. Like the Pied Piper, I ended up with a large audience very quickly. Showing the kids how to make bubbles, juggle, and be silly was incredible. The kids forgot everything and became kids again. Laughter, smiles, and joy.

I was staying with a family I didn’t know in a village that became my adopted village. Some of the boys in the village were keen surfers, including my driver’s 13-year-old son, Adit, and a 15-year-old boy named Fatir. That night, under the protection of the tarps, the boys told me that Mick Fanning and Joel Parkinson were their idols. They had both lost their boards in the earthquakes but fortunately had a couple of spares. I decided to send a photo and a ‘hello’ clip to Joel from the boys. It lifted their spirits incredibly. 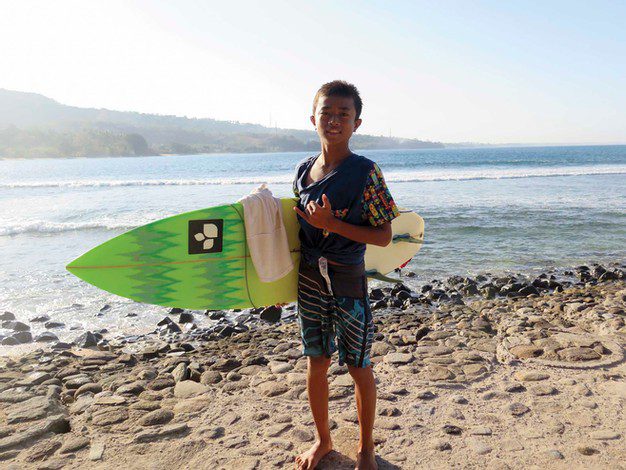 The next day I went down to the beach to watch the boys surf. It was really cool. They played in the surf enthusiastically for a time; they were kids and not overwhelmed with the earthquake mess back on shore.

I would love to write a children’s book about these two boys to use it as a fundraiser and a way for the village to reestablish themselves and to see Senggigi Beach back on its feet.

[style for end info is italics and with a square symbol before the text.]

Anyone who wants to donate can contact Project Karma, an Australian-based NGO that was involved on the ground in Lombok www.projectkarma.org.au/