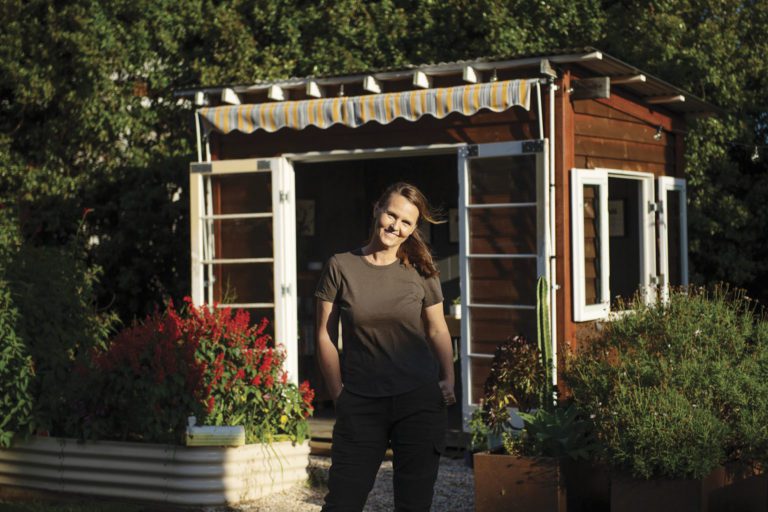 Southern Cross University Faculty of Health and Centre for Children and Young People researcher Dr Kate Neale has brought new meaning to the term ‘growing together’ with her green-thumb themed, community-focused projects.

AS Kate Neale strolls into her back yard, she points out burgeoning citrus trees, a new side garden which she confesses is the result of a Monday morning procrastination and a little cottage shed which sits quietly but proudly in the back corner of the yard.

A chicken has again evaded any attempt to keep it confined to the coop. Kate affectionately chastises it as she scoops it into her arms and tells it to stop eating the lettuce. Kate’s daughter, Peggy, 7, has accompanied us into the garden with her big sister Leelu, 14. 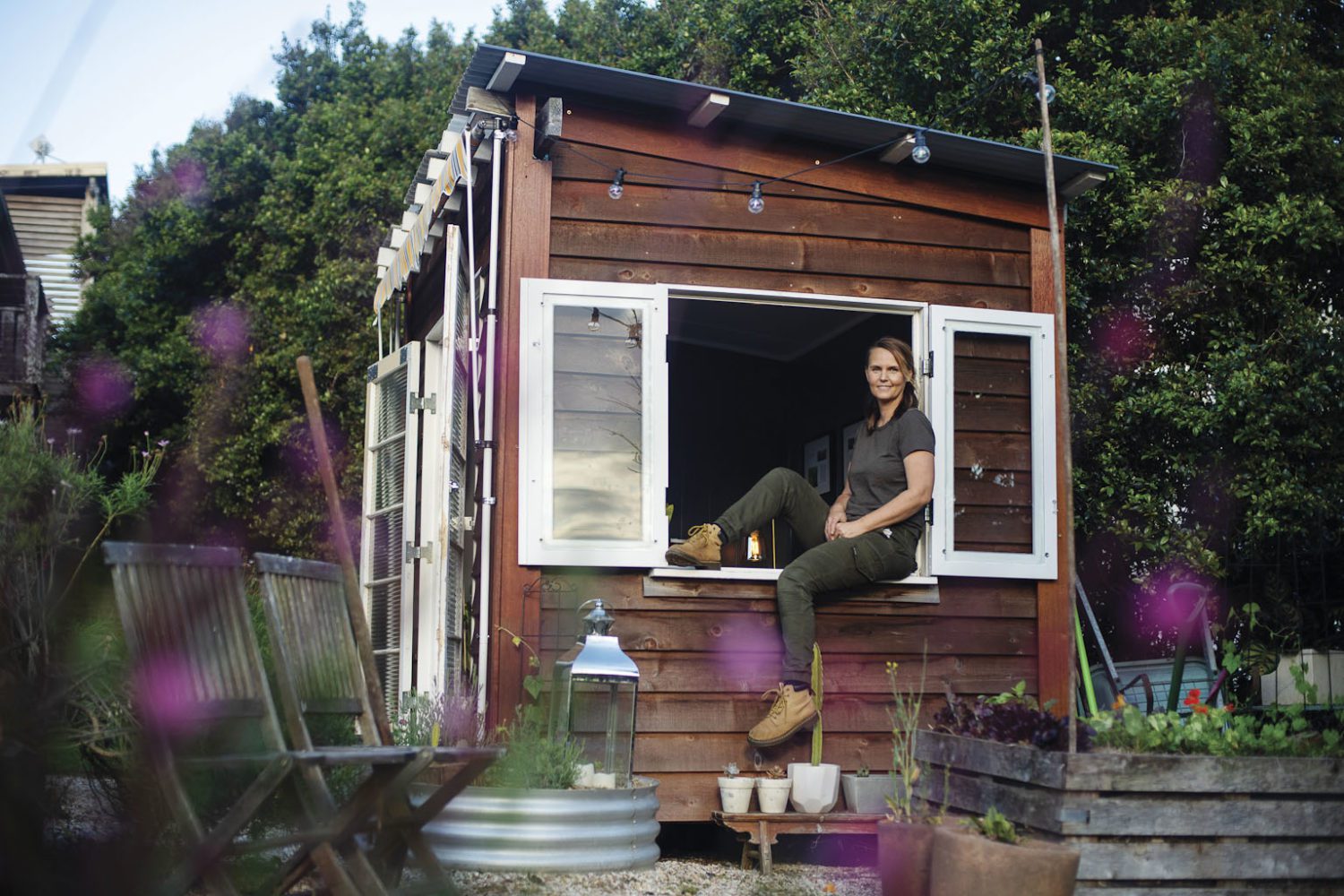 “We call Mum the crazy chicken lady because she’s always talking to them. They always get out and Mum doesn’t care,” Peggy says.

Kate chuckles: “It’s true. I spend one day a month shoring up the coop and the other 29 days enjoying their company in the garden.” 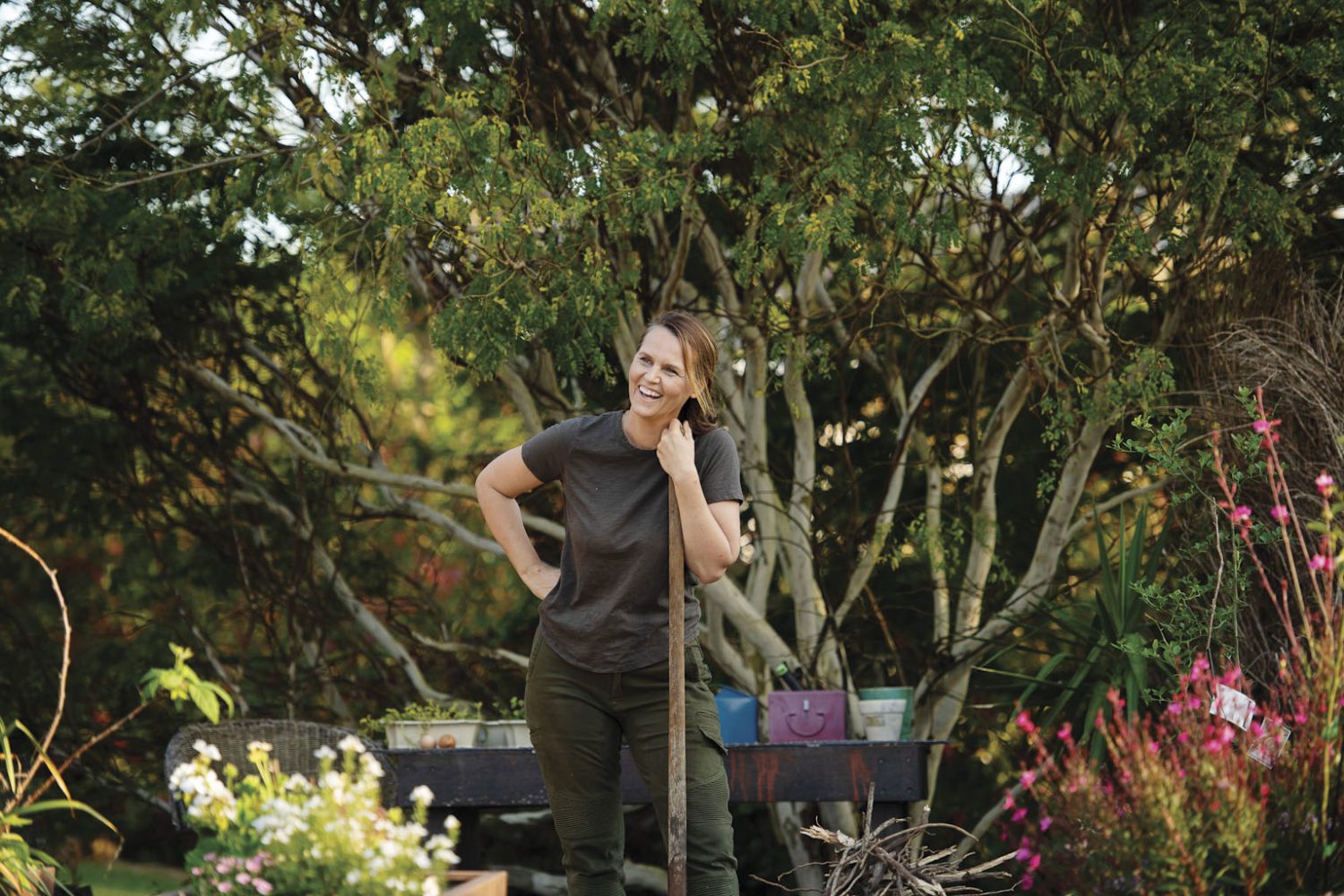 Dr Kate Neale is a researcher in Southern Cross University’s Faculty of Health and Centre for Children and Young People, focusing on childhood and disability studies with a particular interest in the therapeutic benefits of time spent in green spaces.

She’s passionate about horticulture and helping people get their hands dirty. She says it not only helps with individual wellbeing but fosters a real sense of belonging and inclusion at a community level.

“It’s really about being in any green space, or participating in any gardening activity that provides an opportunity for us to feel better about ourselves; to feel more connected to others and more grounded or settled with the world around us,” she says. 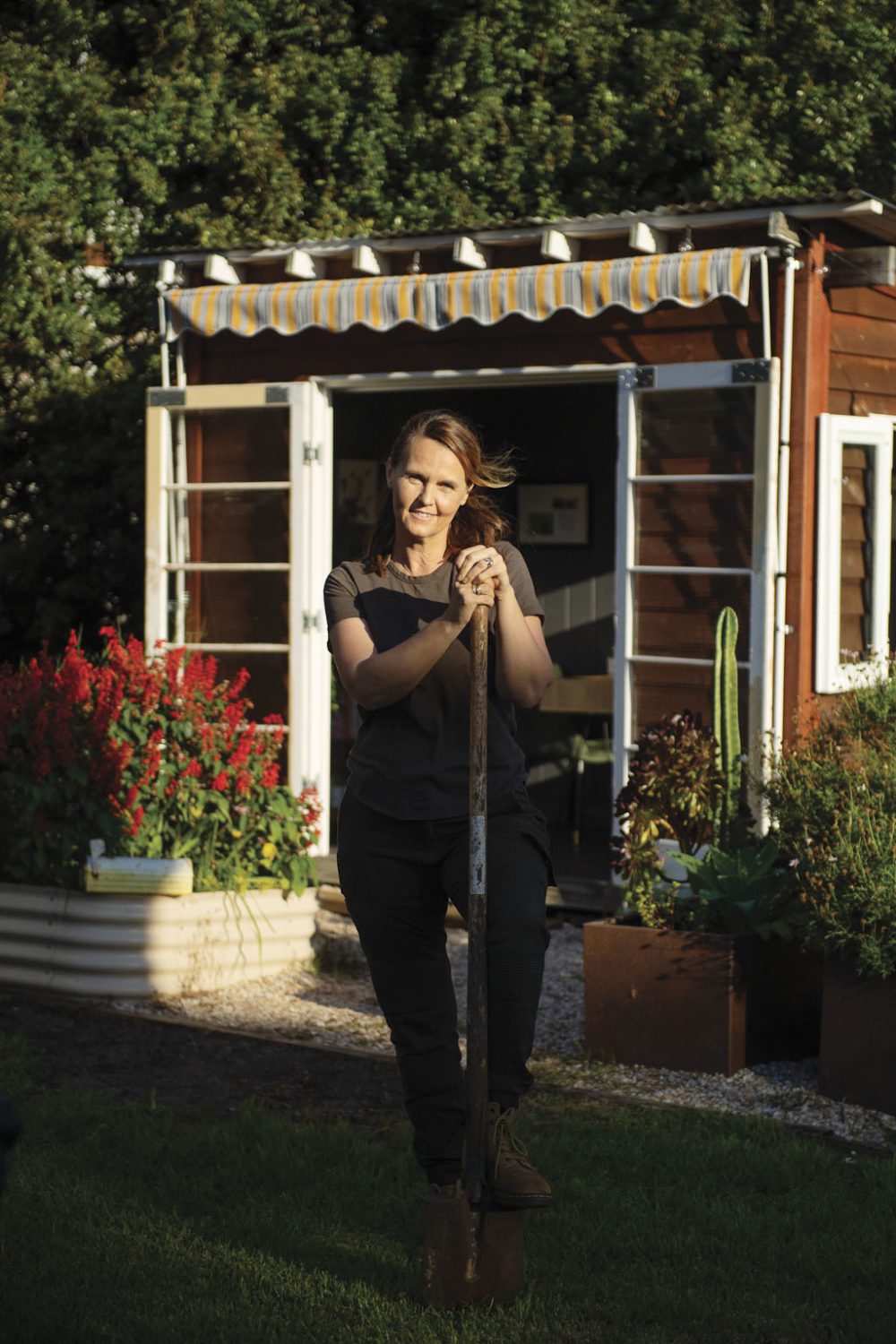 “And we can achieve that in a number of different ways. It might be about connecting to the natural world, in terms of a sensory experience with textures, sights, smells and sounds. It may be in having a green space to quieten your mind, or alternatively to connect and socialise with others in a more public or active way. We can attentively notice nature around us or use activities in the garden to show our own capacity to contribute to making a better world.

“I think I bring a relaxed feel to the garden because I’ve experienced the joy of just giving something a go and seeing what will grow. It takes away the pressure of perfect results and instead you have the fun of experimenting, learning and enjoying the process. I’m also genuinely interested in hearing the wisdom of seasoned gardeners who benefit from the opportunity of sharing their lived experience and knowledge with me. They can see I’m learning from them and that instills a sense of pride and currency that they have a lot to give others. 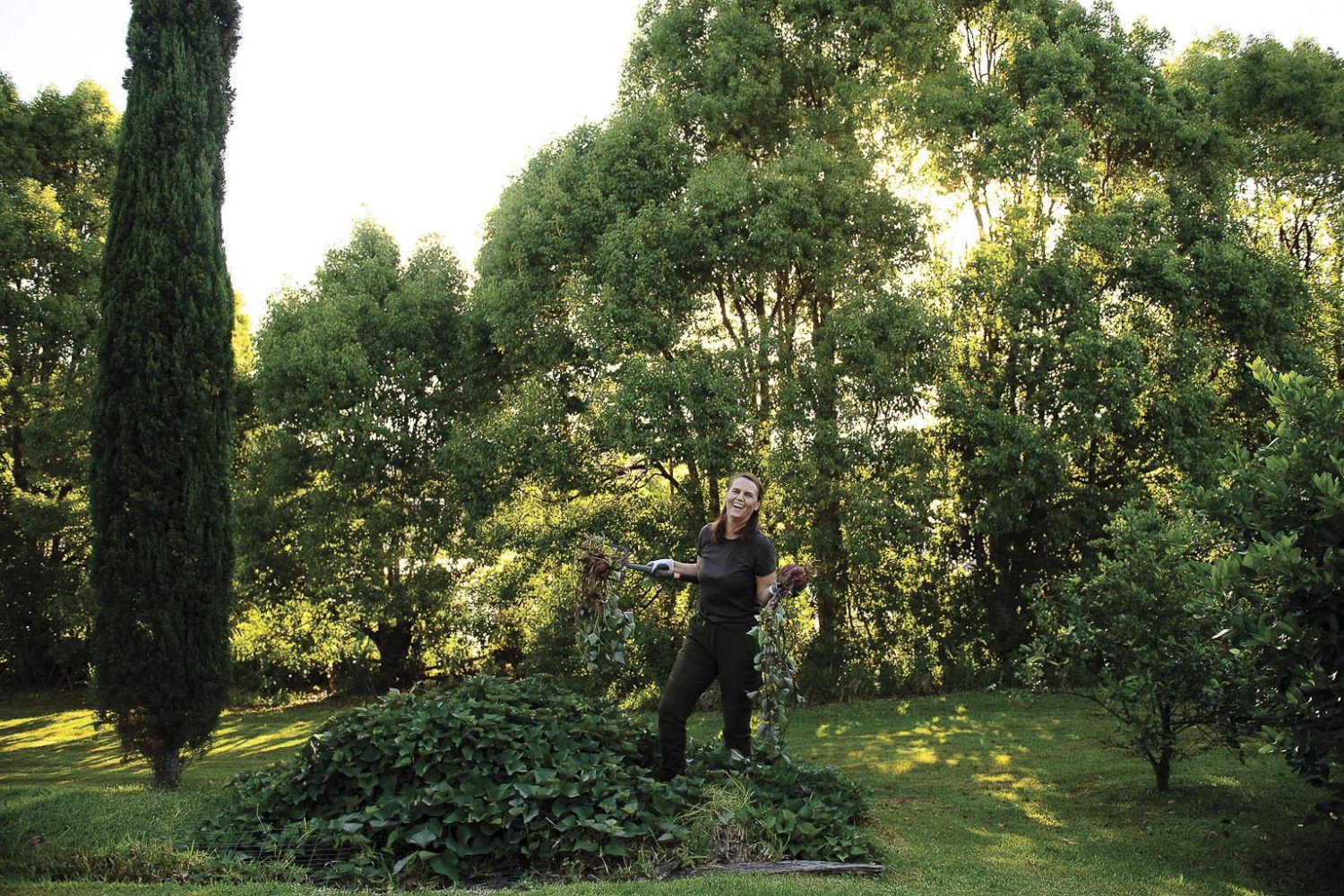 “It also destabilises typical power assumptions about the researcher and the researched because I’m admitting they know much more than me. They are the experts in the garden and I’m genuinely here to learn from them.”

Kate has converted her little shed into a fully functional office space, right in the middle of her ever-expanding garden. She realised during the pandemic how important it was to have a space to work in that was distinct from her home life, but still connected to her garden and work.

“It’s where I do all my teaching, research and meetings. My chickens and my children often feature in the background of my zoom meetings, so it’s lucky they’re on-brand – much of my work focuses on children and nature,” she says. 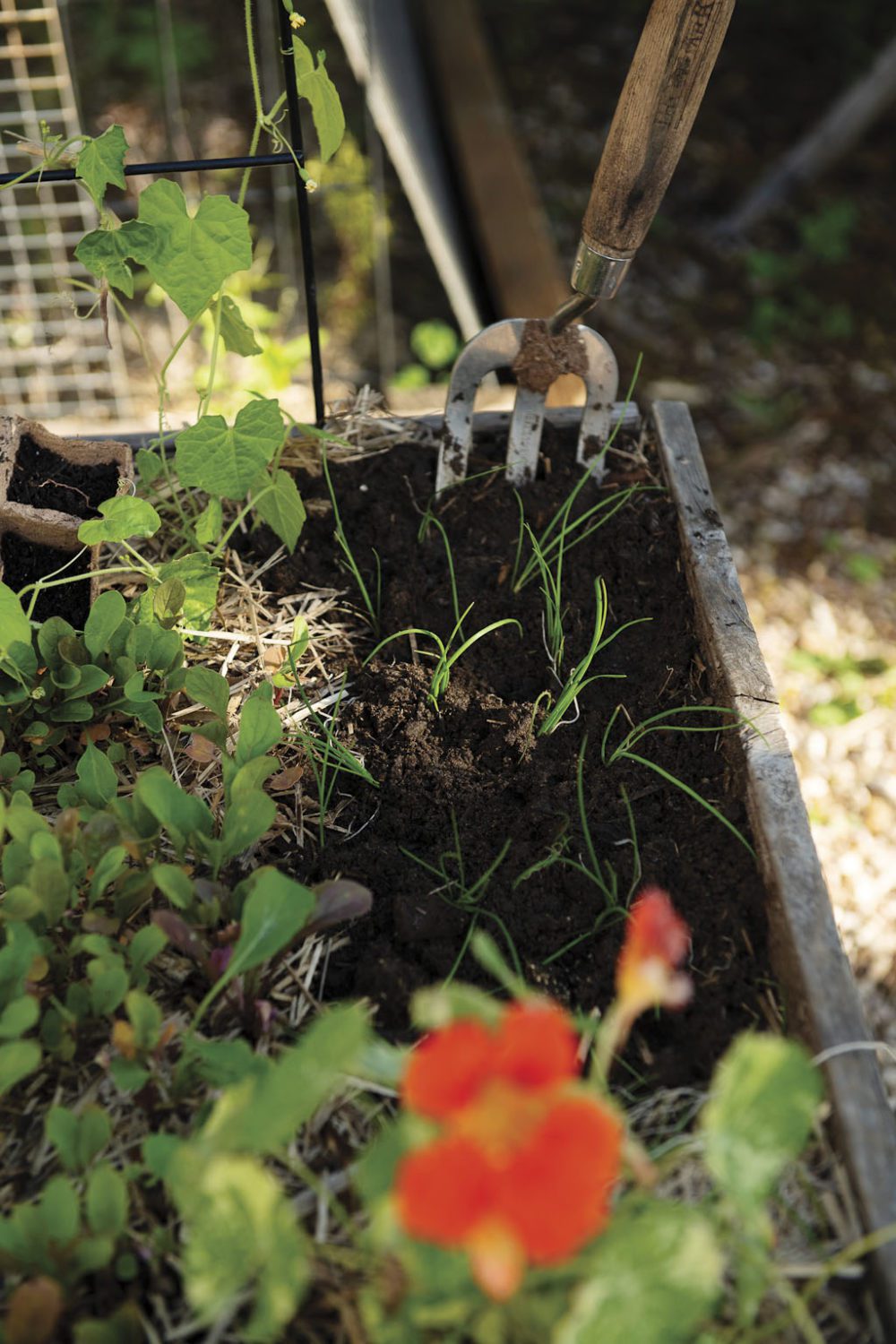 “I’m deeply passionate about the work I do, so I literally sit in the garden every day working, seeing my veggie patch out the window and feeling immersed in joy.

“Recently I’ve had to make it less veggie patch and more flowers just for self-control during work time. It’s constantly beckoning me to just plant one more plant, or pull those few weeds – so when I feel like it’s all flowers, there’s less to do and pick.”

In the past five years, Kate has written a number of therapeutic gardening programs,  presented internationally on the topic, written in prestigious industry publications and continued her research in the field. 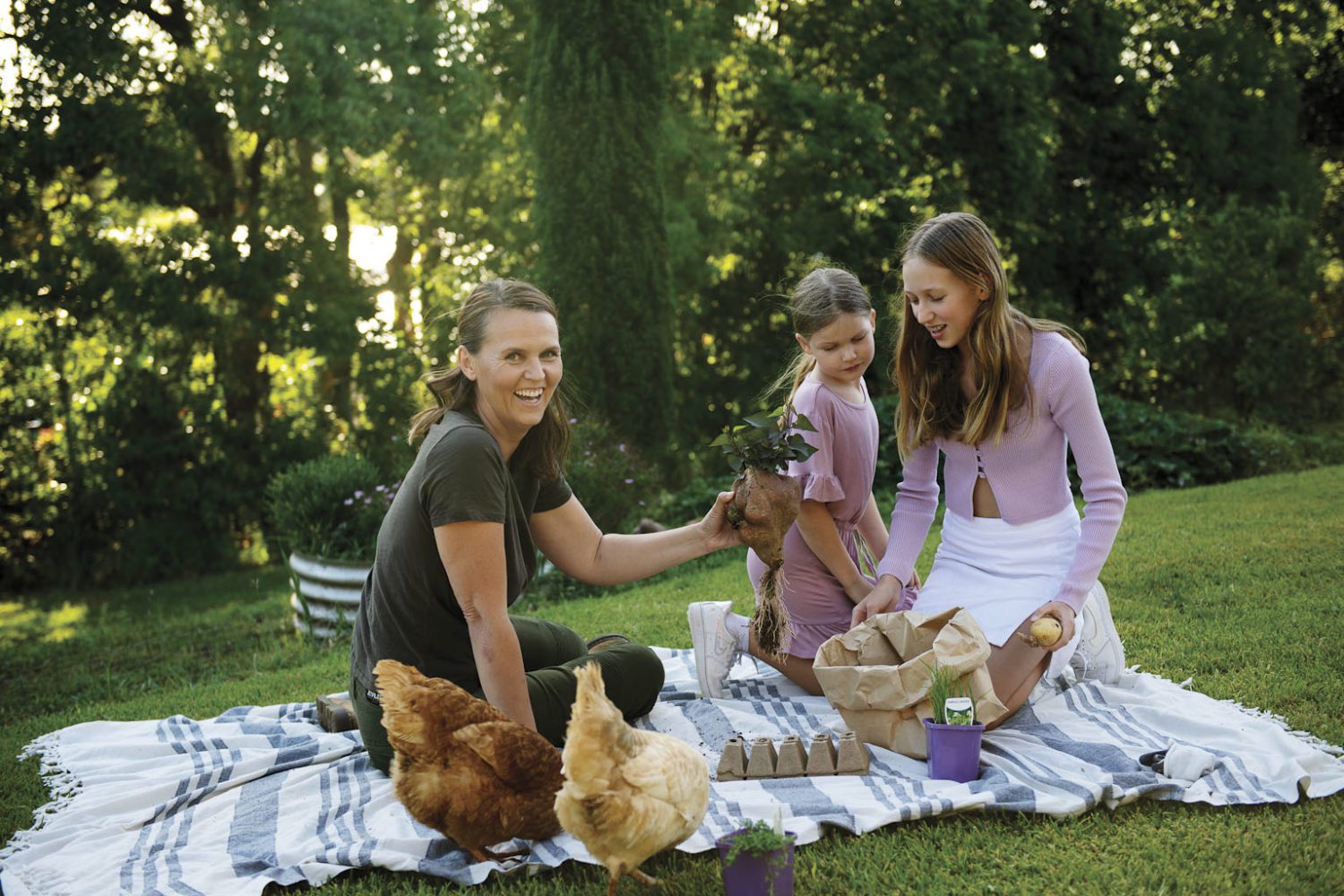 “From our recent survey, there really does not seem to be a group of people, a cohort, or a person who could be excluded from the benefits of therapeutic horticulture,” she says.

“There’s such a broad spectrum of people who can benefit, from children through to adults, people with a disability, people with dementia, returned services veterans, those who’ve experienced trauma. Research has shown when the general public has access to green spaces near where they live, it improves their own wellbeing and sense of self.”

Back at home, Kate says her children love getting out into the garden with her, not as often for the weeding and pruning as for picking produce such as fresh raspberries, but she enjoys their enthusiasm nevertheless.

Their interest in the garden ebbs and flows. Sometimes they will have their own garden bed and other times they are more interested in whether there are strawberries to steal. But for Kate, any time they’re gardening together is a moment making memories. 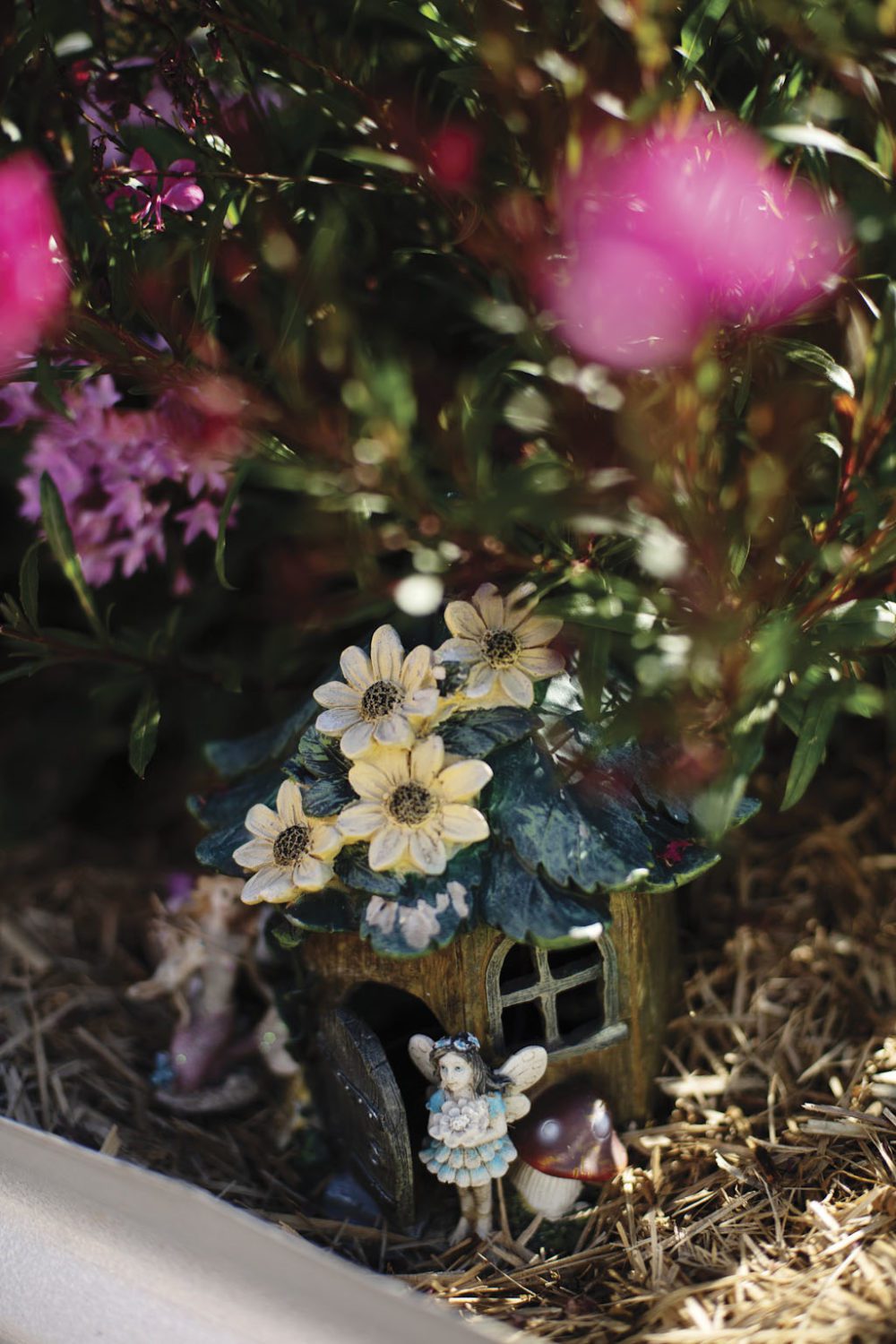 “I’m a bit of a nostalgic romantic and one of my strongest childhood memories is of Saturday mornings in the garden doing jobs with the whole family,” she says.

“I often wonder what childhood memories of time spent in the garden will remain in my children’s minds and how, if at all, that will draw them back into gardening when they are older.”

Like so many Aussies, Kate’s garden has been a life-giving sanctuary throughout rolling lockdowns, bouts of home-schooling and the uncertainties of the past two years.

“Gardening does this really wonderful thing where it makes you believe in tomorrow. You plant a seed and tend to it because you believe there’ll be growth tomorrow,” Kate says. 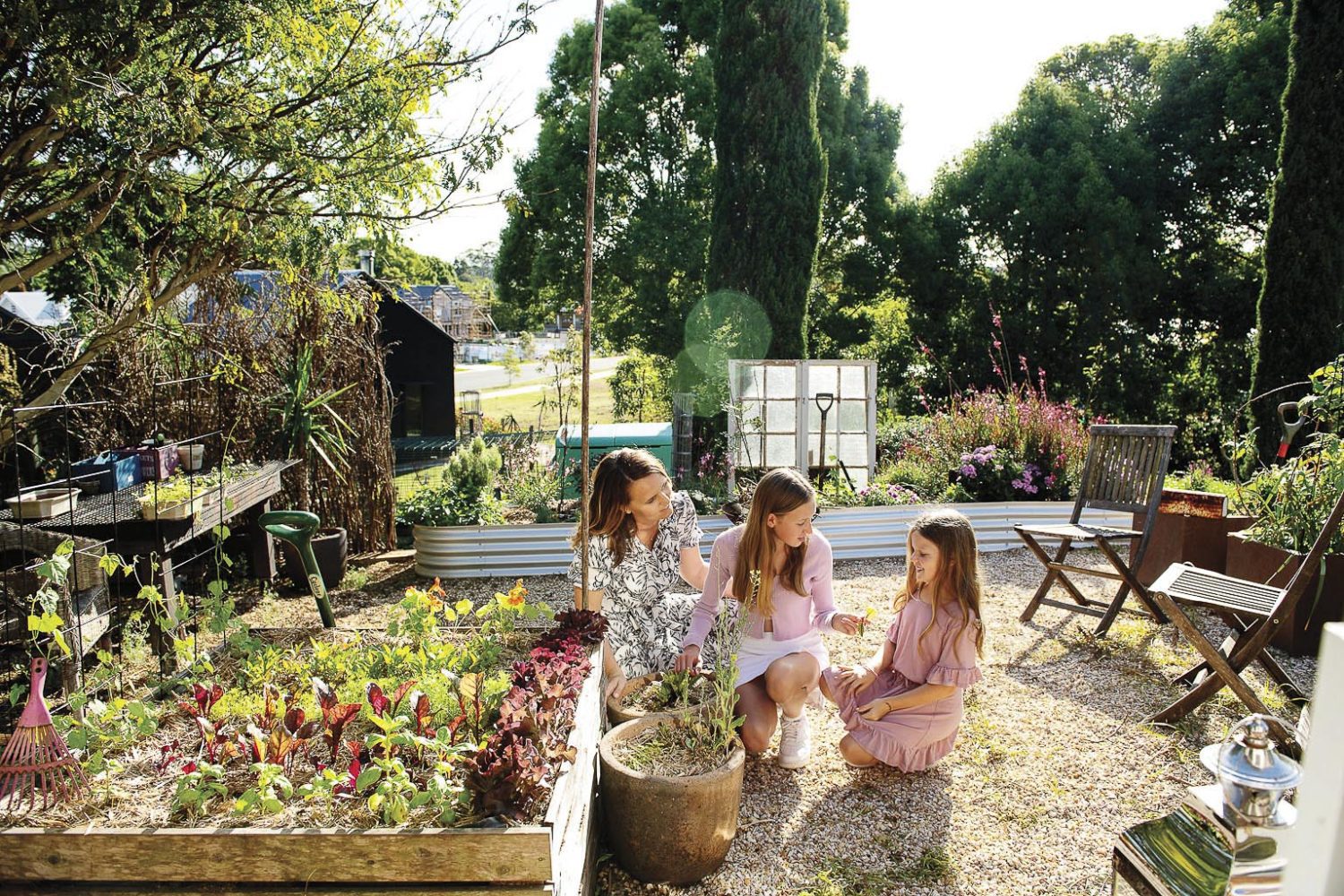 “During lockdowns, we noticed a lot of people started getting into the garden and there was a massive spike in people showing interest in horticulture and specifically therapeutic horticulture. If people had a backyard or even a planter box on their balcony it was the one place they were allowed to go without restriction and it provides something productive to do during the day.”

Kate says you don’t have to have an elaborate garden to reap the rewards of a therapeutic landscape.

“I just started small. I originally had a patch slightly bigger than a metre-by-metre in the middle of my backyard, and now I have a beautiful, thriving garden,” she says.

“I grew a couple of things and honestly, at first so many things died, but you can just pull it out and pretend it never happened, and now I still celebrate the little wins like the cherry tomatoes, even though I haven’t mastered the art of big tomatoes yet.

“But even for people who don’t have a yard, planter-boxes are a great option to put on a porch or by a window to grow some herbs or flowers and reap the benefits. 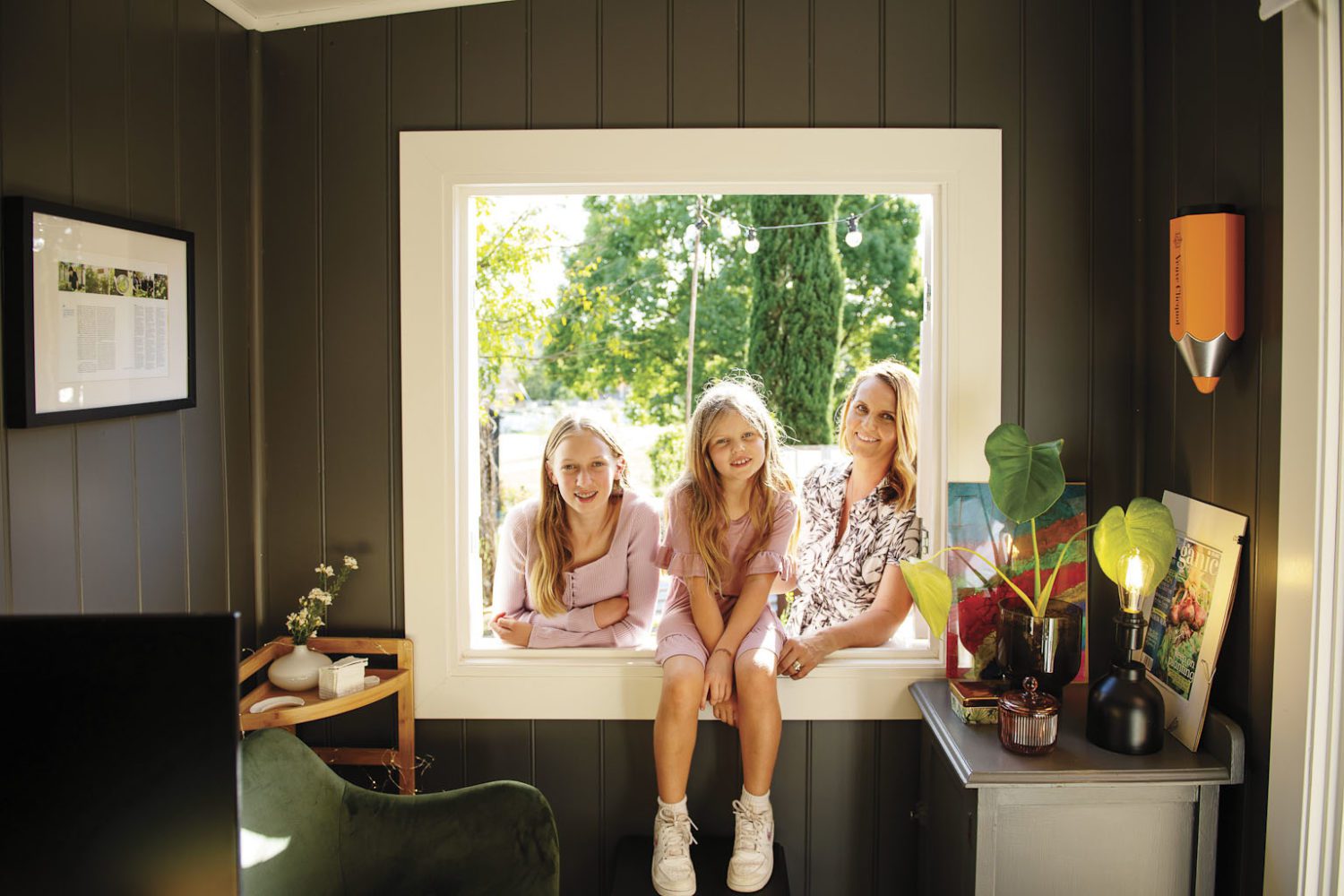 “Even simply making the time to take a walk through beautiful green spaces and noticing the sights, smells and textures is a way to take care of yourself and connect with the natural world around you.”

Kate has had an incredibly varied career in research so far, starting with a project about homelessness in the Northern Rivers and South East Queensland, her PhD research into children’s understanding of ethical consumption and a disability project which looked at the relationships between people with a cognitive disability and their carers. The common element in her work is the importance of giving voice to people who may be marginalised, vulnerable or underappreciated for their capacity to contribute.

“I realised it’s not just important what you find out in research, but how you engage with people who have lived experience in the process that matters. We tackle these tensions constantly in another project I’m involved in at Southern Cross in partnership with UNICEF’s Office of Research, under the lead of Professor Anne Graham.”

The Ethical Research Involving Children website (www.childethics.com) is an internationally acclaimed project exploring the nuances and complexities of involving children in research in a way that is meaningful for them and ethical in approach.

“All of these experiences have shaped my approach to my work in the field of therapeutic horticulture,” Kate says. 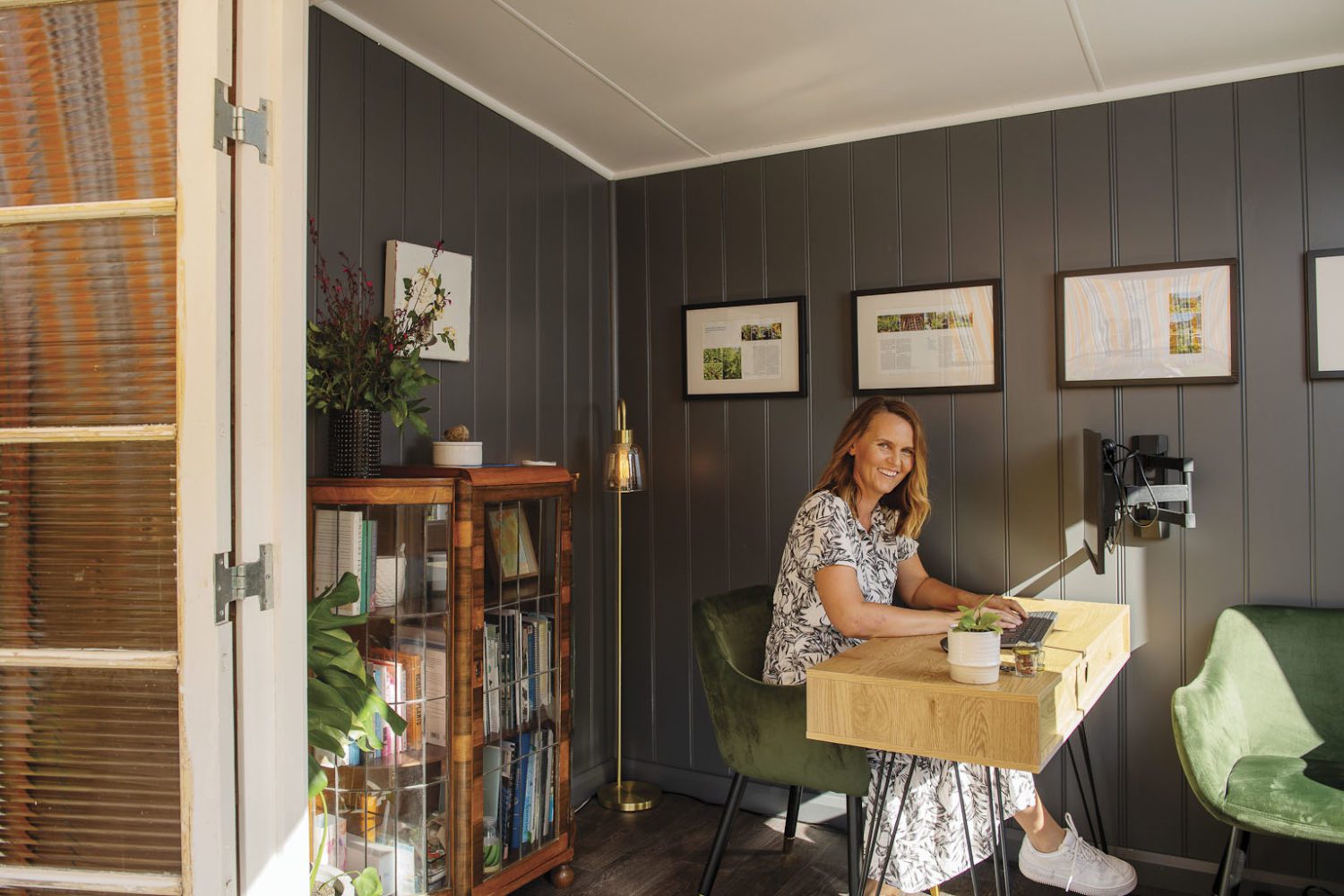 “I got to a point in my career where I decided I wanted to meld everything together, including my love of gardening, and I love this research career that I’ve created. I love working with kids and hearing their voice on things that matter, and the same with people with disabilities and their carers. I realised that through therapeutic horticulture people can have a say in their life and demonstrate their capacity and enthusiasm for giving through gardening and how this empowers them to have a say in other aspects of their lives too.”

Kate recently worked on a project with Aruma disability services in Northern NSW, where she helped residents with cognitive disabilities in supported independent living homes to establish their own thriving gardens.

“I loved this project. There were three separate homes that I would visit once a week over a four-month period to help transform their gardens into wonderful spaces,” she says.

“The residents and staff took total ownership of the project and watered and cared for the gardens every day and I checked in once a week when we would get in the garden and see if anything was ready for picking or needing some other attention.

“At one of the homes, there were garden beds either side of the ramp leading to the front door. It was originally full of Lomandra mat rush, which is a grassy-looking pedestrian plant that doesn’t encourage any real interaction, so we took that out and replaced it with a thriving veggie garden the whole way along. The veggie patch and thriving plants brought a new life to the building and the people who were living there, as well as beautifying the street with their hard work and commitment to the garden. 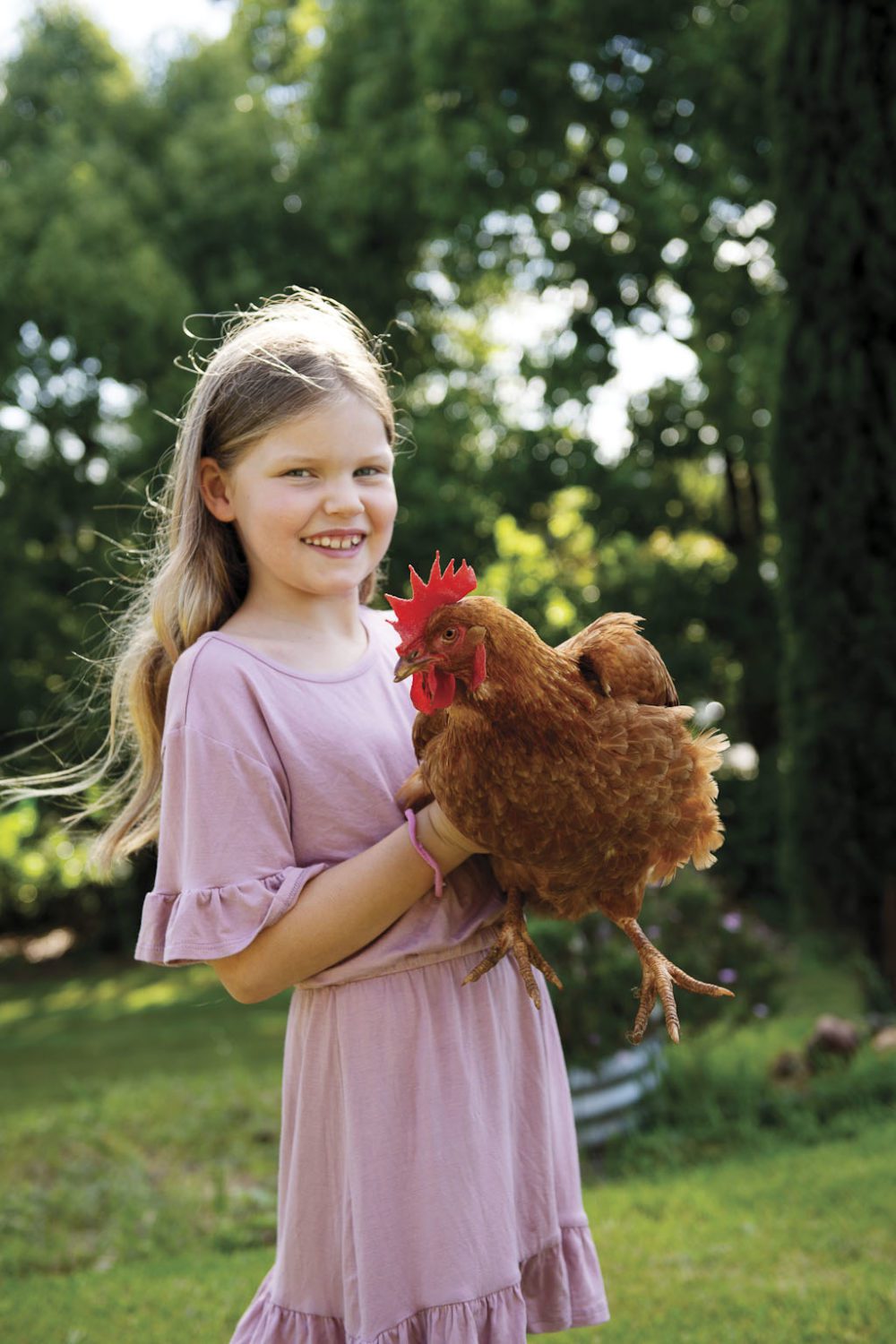 “There were up to 30 different plants growing, including carrots, cucumbers, corn, strawberries, eggplants, tomatoes and even cucamelon – which is an edible, grape-sized cucumber that looks like a tiny watermelon, which were novel and fun and a great conversation starter.

“It’s a seasonal kitchen garden so the residents loved picking the food they had grown themselves, cooking it and enjoying a meal together, and even just picking and eating a cucumber straight off the vine.

“And in the lower sections were lavender and rosemary, which when brushed past provided a different sensory experience within that garden.

“Having a garden not only gave the residents more to do at home and opportunities to catch up with each other, but it also increased their visibility in their neighbourhood and community.

“For me, this wasn’t just an academic research endeavour, even though we produced real-world, evidence-based reports. This was also very personal and close to my heart, where we all learned and gained knowledge and were able to ‘grow together’.”