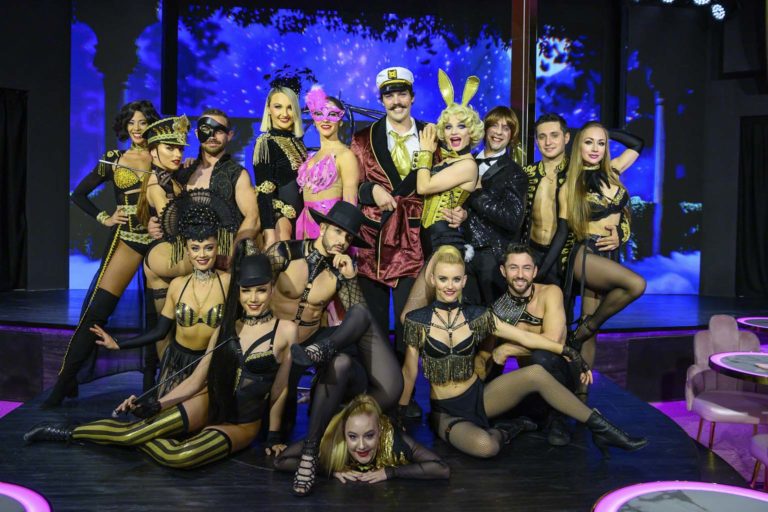 The hotly anticipated Pink Flamingo Spiegelclub will open its pretty pink doors to the public for the very first time tonight, Thursday 22nd August 2019 on the Gold Coast.  Their debut show SUAVÉ features talented stars sourced from all over the globe and will be the first colossal production to grace the stage at the world’s first Spiegelclub! 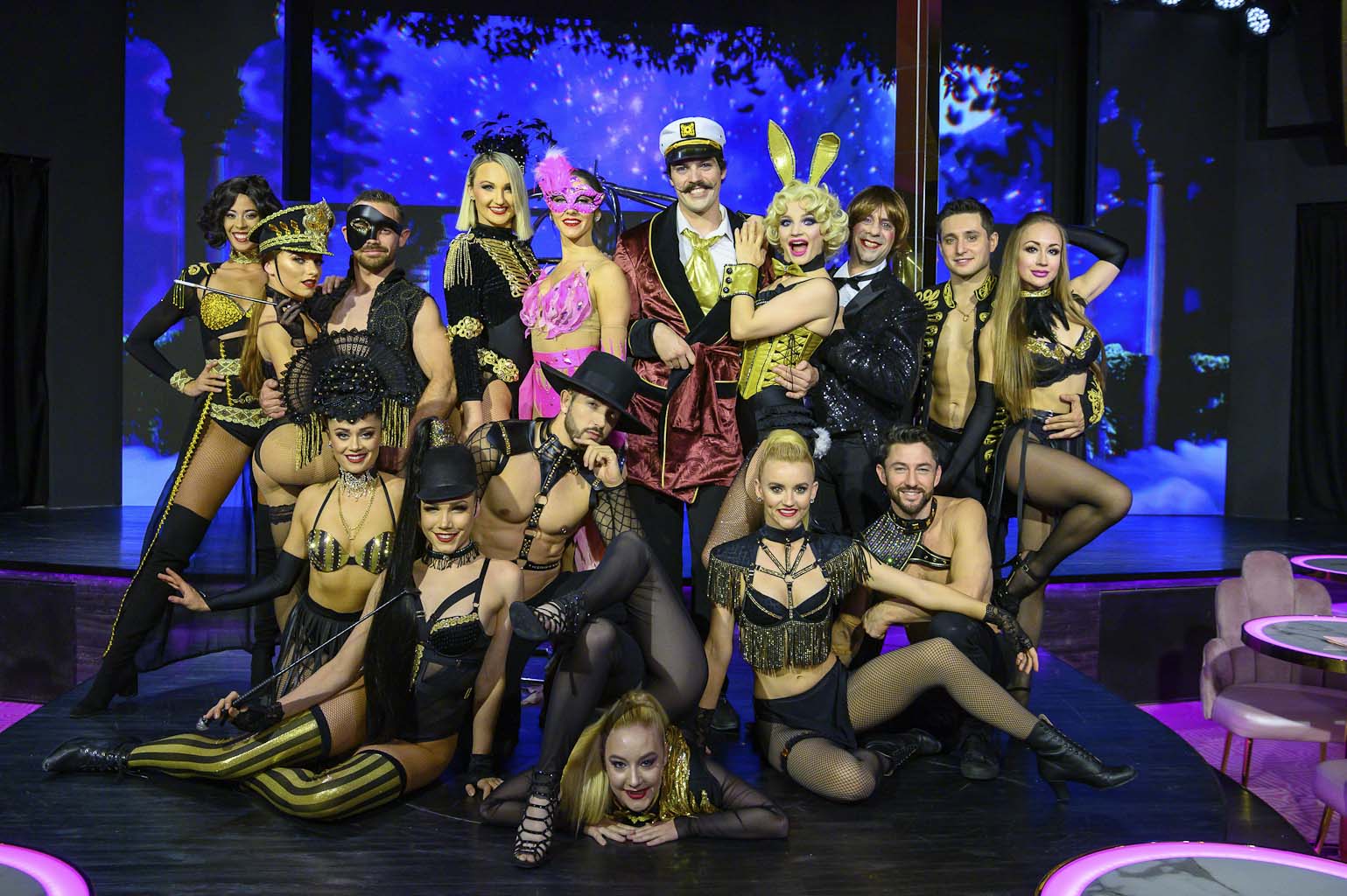 The swanky Art Deco-inspired entertainment destination is set to put the city back on the map, luring flocks of fun loving locals and tourists to the precinct to experience world-class cabaret and Vegas-style nightlife with live performances of the sexy and sophisticated stage show SUAVÉ showing Wednesday – Saturday each week.   Co-owner and producer Sue Porrett explains,

“The Pink Flamingo Spiegelclub will be the first of its kind in the world!   It’s a purpose built, custom designed, permanent theatre featuring a slick and sassy show designed to entice and delight.   No expense has been spared in the design of our brand-new venue.   Following the show, the Spiegelclub comes to life with a high-end club experience, complete with aerial performances and roving entertainers that will appear into the wee hours of the morning.  Expect the unexpected!” 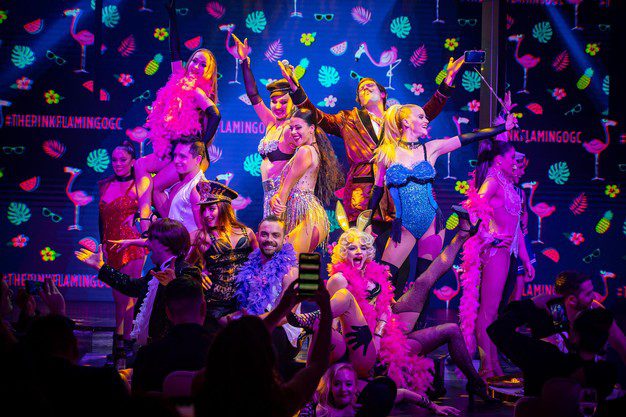 SUAVÉ at The Pink Flamingo Spiegelclub with deliver a myriad of international and Australian performing artists across a range of disciplines including burlesque, dance, cirque-style acrobatics and daring aerial acts, laugh out loud comedy, flamboyant cabaret and more!  Talent has been sourced from Russia, Mexico, USA, UK and beyond!

The show-stopping masterpiece has been exclusively cleverly crafted and created for The Pink Flamingo Spiegelclub by entertainment darling Sue Porrett and renowned Australian choreographer Anthony Ikin.

SUAVÉ’s hilarious host and resident playboy bachelor Hugh G. Lefnut, played by Australian born Zion Martyn, invites guests to join his party as he whips up an exotic cocktail of sizzling feature acts and high energy performances for an edge-of-your-seat spectacle that’s sure to delight audiences of all ages. 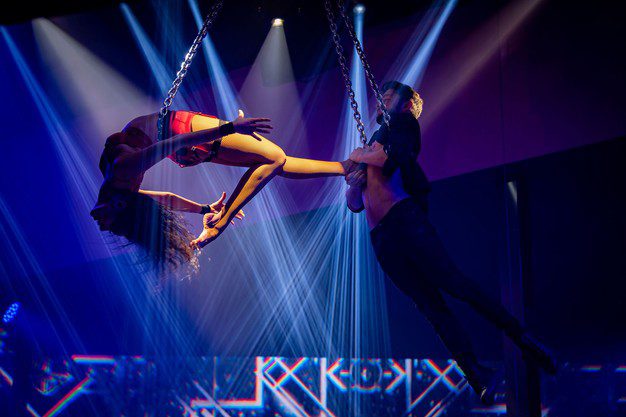 Internationally acclaimed Australian dancer, Jane McFee, has returned home from the Moulin Rouge in Paris to join the colourful cast of SUAVÉ, along with the award-winning Russian poll duo Olga and Marat who have flocked to The Pink Flamingo Spiegelclub straight from a residency in Las Vegas.

The mesmerizing show will be performed on an impressive stage with a backdrop that features an impressive 20-metre custom designed LED screen, providing an artistic backdrop of projection displays that are certain to enthral.  Add pulsating live beats from international musicians and DJ’s….and you’ll meet The Pink Flamingo Spiegelclub in all her glory!

However, SUAVÉ is just the beginning of your night out! 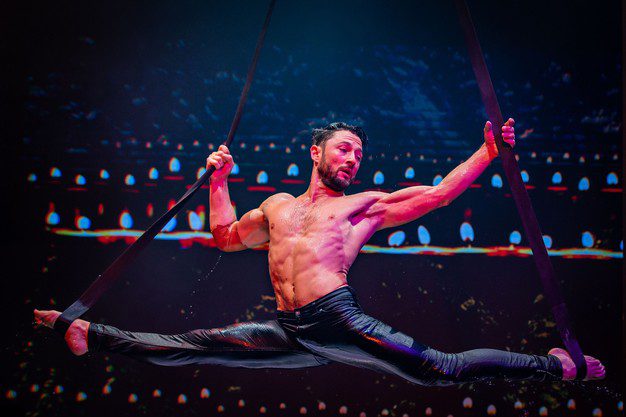 “The Pink Flamingo Spiegelclub is a dream come true.  I have designed this concept from scratch.   Everything has been custom designed just for us! It’s like stepping into a night at Gatsby’s – there’s entertainment, fervour and hedonism at every turn. This is no ordinary nightclub…it is a Spiegelclub!  We are reinventing the late-night experience.” said co-owner Tony Rigas.

Once the audience has been thoroughly entertained by the sassy show SUAVÉ, The Pink Flamingo Spiegelclub steps up to the next level!  It’s time for The Club – The Spiegelclub that is! A high-end venue where art, passion, music, performance, dance and people collide every Friday and Saturday Night from 11pm until 3am.

“The Spiegelclub is a melting pot of a slick sassy show like SUAVÉ, roving performances in the late-night club best enjoyed at our premier Art Deco bars, lush booths and throw in top notch service and we have a hotspot certain to impress! It’s the after-party of all after-parties!” Rigas explains. 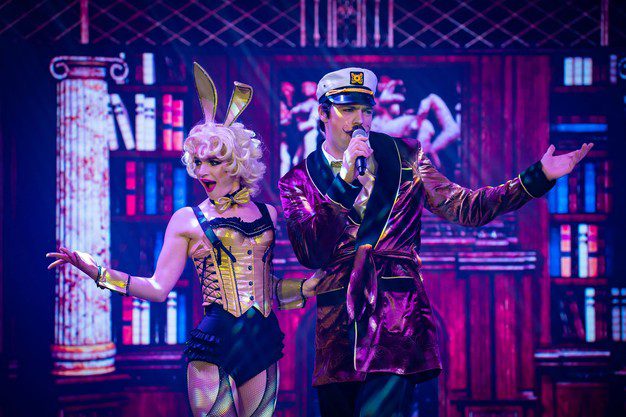 All guests who purchased tickets to SUAVÉ are given a complimentary wristband valued at $25 per person for entry into The Spiegelclub from 11pm on Friday and Saturday nights. The wristbands are only valid for the same day as tickets for SUAVÉ were purchased. Guests who attend the 9pm shows on Friday and Saturday night can stay in the venue and will be escorted to the exclusive SUAVÉ after-party in the Birdcage on Level 2 before The Club officially opens at 11pm.

“The venue will already be pumping with hundreds of guests who have just seen SUAVÉ – what a great start to the post show party! Then other guests are welcome in the venue from 11pm and will be able to gain entry at the door, however we will only have limited availability, so we highly recommend that people pre-book a booth and bottle service prior to arrival to ensure they gain seamless entry,” said Rigas 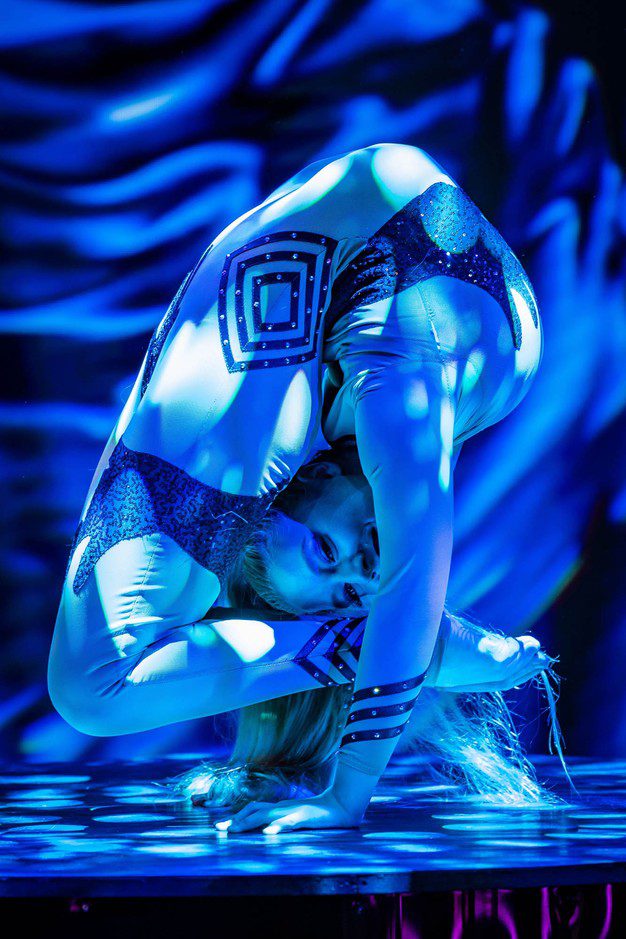 SUAVÉ at The Pink Flamingo Spiegelclub will deliver mind-blowing acrobatics, daring aerial feats, laugh out loud comedy, unbelievable cirque acts, singing, dancing and a splash of saucy scandal, just for good measure. Then join the encore at The Spiegelclub where the after-party really hits fever-pitch!

Tickets are priced from $78 up to $148 and include a complimentary grazing platter designed to share.

Pink is not a colour, it’s an attitude! #pinkflamingogc 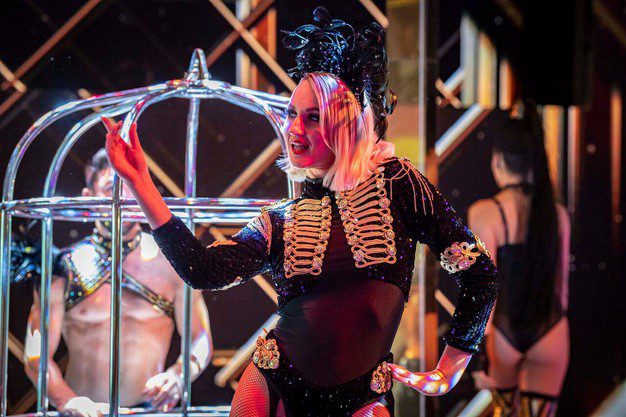 The Pink Flamingo Spiegelclub is proud to present their inaugural show SUAVÉ…. a tantalising and outrageous show certain to delight!

The Gold Coast nightlife is about to come alive as Hugh invites everyone to join his party!  The talented cast features a remarkable mix of daring cabaret and cirque artists from every corner of the globe including Russia, Mexico, USA, UK and Australia.  Mind-blowing acrobatics, daring aerial feats, laugh out loud comedy, unbelievable cirque acts, singing and stunning dancers all come together in the scandalous and saucy new show SUAVÉ!

SUAVÉ is glamorous, lush, dangerous and sassy and opens in the world’s first Spiegelclub, The Pink Flamingo on the Gold Coast on Thursday 22nd August. Once the audience has been thoroughly enthralled and entertained by the sassy show SUAVÉ, The Pink Flamingo Spiegelclub steps up to the next level!  It is time for The Club.

A high-end venue where art, passion, music, performance, dance and people collide every Friday and Saturday Night from 11pm.  This is no ordinary nightclub, but an adults only plush playground with mini-shows and roving performances throughout the evening.  Entry is via a ticket* at the door or even better book a plush booth with bottle service, a must for those who ooze sass and sophistication and like the finer things in life.  These prime perches will sell like pink hot cakes, so pre-booking is highly recommended.

The Pink Flamingo Spiegelclub will host special events, the hottest DJ’s, pop-up performances and special guests.   Come and step into our world!

*All guests who purchased tickets to SUAVÉ – The Show are given a complimentary wristband valued at $25 per person for entry into The Club from 11pm on Friday & Saturday nights.  The wristbands are only valid for the same day as tickets for SUAVÉ were purchased.   Guests who attend the 9pm shows on Friday & Saturday Night can stay in the venue and will be escorted to the SUAVÉ Afterparty in the Birdcage on Level 2 before The Club opens at 11pm. 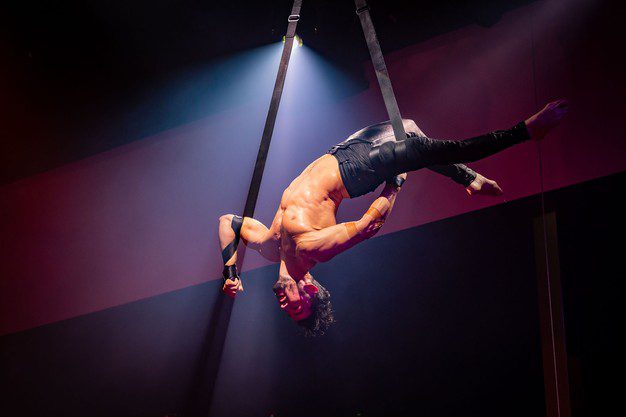 FLAMBOYANCE – Only for the highly sophisticated that appreciates the finer things in life.  If you are a demanding social diva or a corporate highflyer, you must have the best seats in the house…no exception!   These stage-side plush posies are very limited, so snap up the most prestigious perch in our pink palace before they sell-out….and nobody puts baby in the corner!  While the rest drink sparkling, these seats include a complimentary glass of French Champagne.  Cheers Darlings! #highlife

FLOCKING FABULOUS – The Flamboyance seats are very limited, but even though you haven’t snapped up the stage side seats, you have sass and style that simply must be appreciated.  This space is ideal for flocks of friends that need more space than just two seats.   We dare not say the word ‘swingers’, but isn’t everything better in a larger group?  Que the pink feathers! #groupfun

BIRDS OF A FEATHER – Hands up who likes to watch?   The Pink Flamingo Spiegelclub will deliver a sassy show that will delight, but we also love guests that like to peruse the crowd as well.   You still have a prime perch to watch Sauvé, but you have the added benefit of watching all the crowd as well.  Flocking fabulous darling! #goodlookers 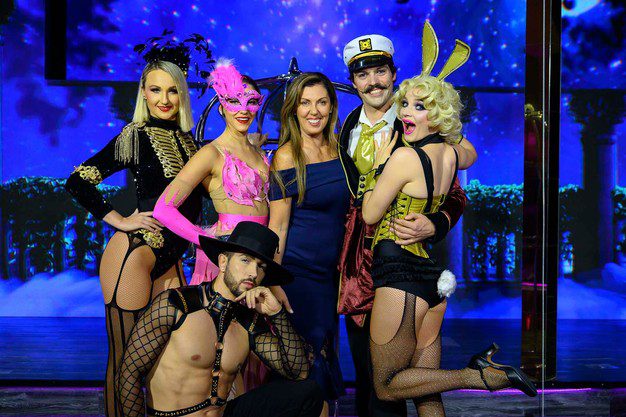 All tickets include a complimentary grazing platter