The thrill of FALLING FREE 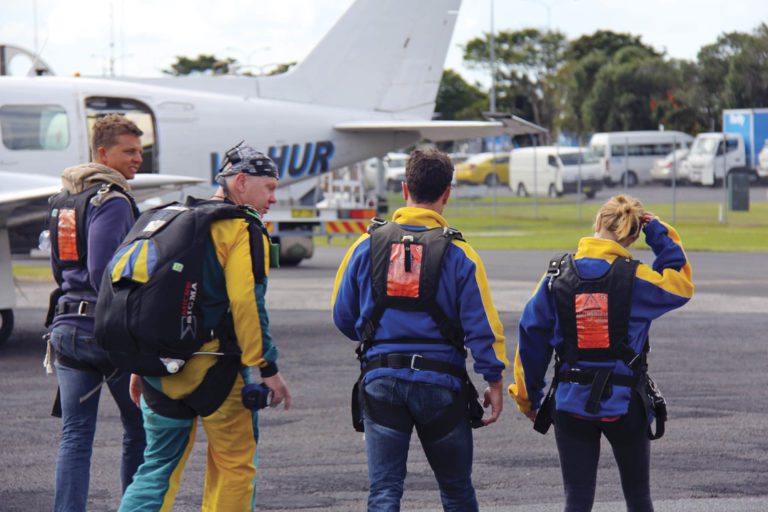 On a wing … and then a prayer, Craig and Jade McGarry climb high into the skies before free-falling back to earth in an experience everyone should put on their bucket list.

I am plummeting from the sky in an accelerated free-fall from 14,000 feet, at over 200km/hr. I pass through the clouds in a blur, close my mouth and my whole face wobbles like jelly. I smile and my teeth start to feel like they’ll freeze.  My heart is beating like a base drum, all my body’s senses are on extreme overload. 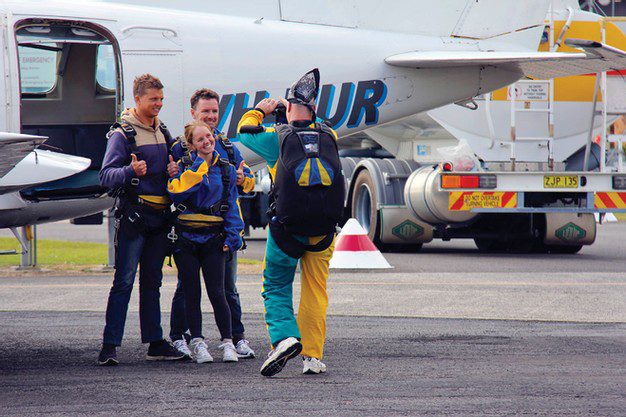 This is such a far cry from our recent, leisurely, dream-like Hot Air Balloon Flight over the picturesque Byron Bay Hinterland. This, readers,  is a mind-blowing, adrenalin-pumping free-fall tandem parachute skydive.

Welcome to adventure in the sky! Sounds challenging? Well, you bet it is! But one of the greatest challenges I faced turned out to be simply finding willing test team members to take it on. 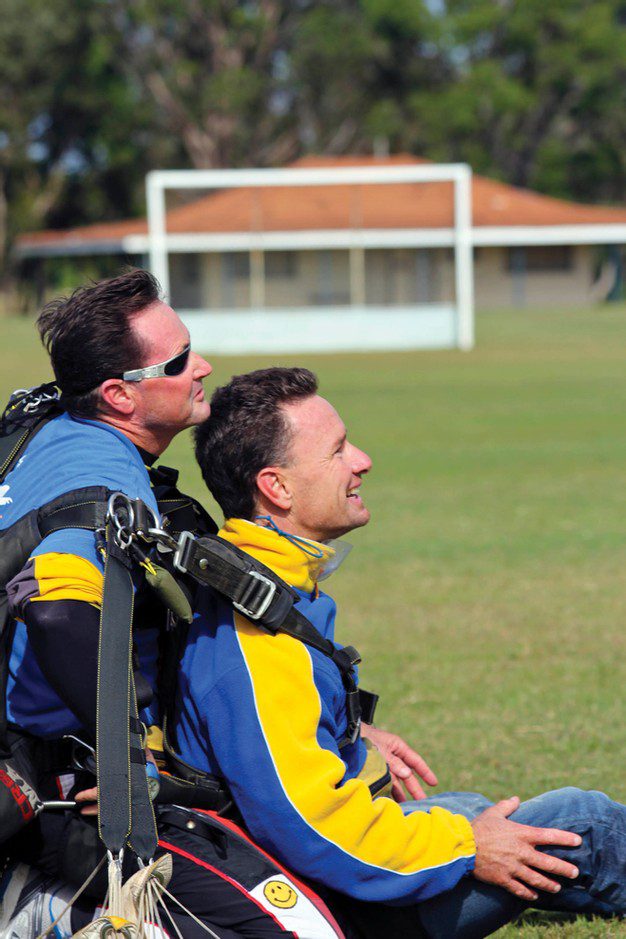 When I approached several of our regular guys and mentioned my idea for our next feature, white faces and a variety of lame excuses quickly followed. There were classics like: dental surgeon appointment, next door neighbour’s kid’s birthday, even the “sorry, Craig, I really have to prune the flowers at Mum’s place that day”. 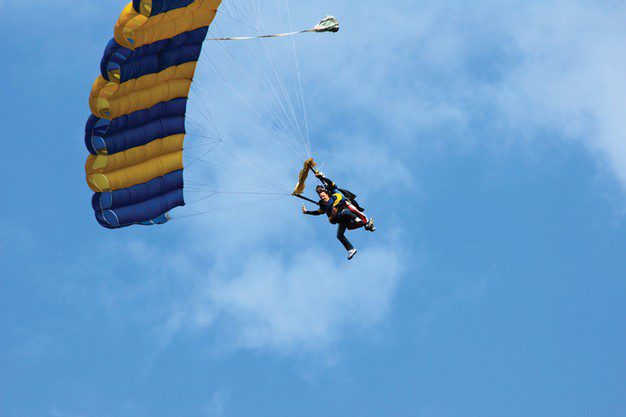 “Yeah, Dad, that would be so awesome … bring it on,” she bellowed when I told her what we were actually planning to do. However, as it turned out, this early bravado began to slightly diminish on the actual day as we drove down the highway to our morning’s destination, ‘Sky Dive the Beach Byron Bay’.

This is one of the coast’s premier tandem skydive companies but Jade nervously asked a gazillion questions in an attempt to ward off the nerves. 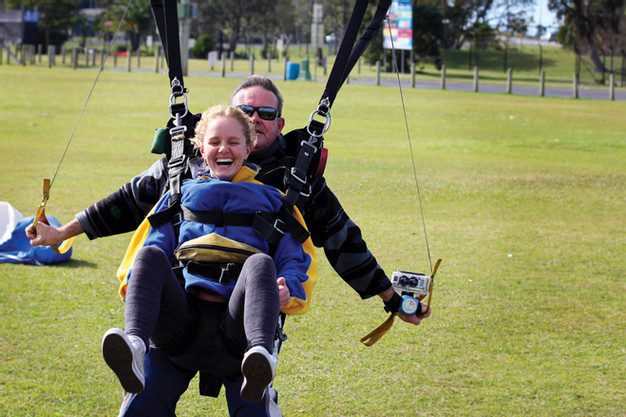 “How long will it take to make it to the ground? How fast do we go? What if the parachute doesn’t open?”. Finally I had to tell her that the best way to explain how free-falling would feel was to stick her head out the car window while we drove along the freeway, and then double the sensation.

By her white face and dropped jaw, maybe not such a good analogy. 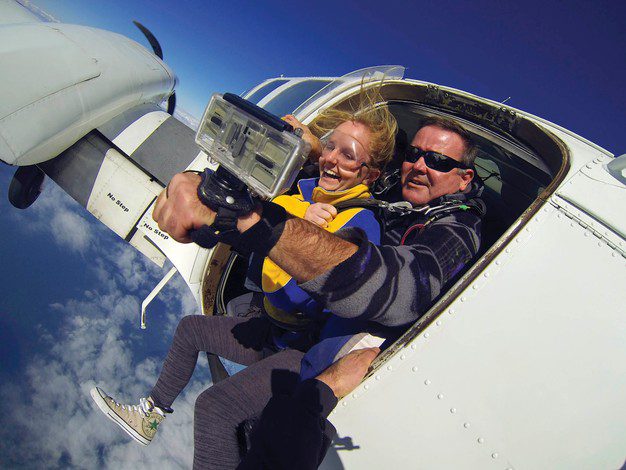 Regardless, with support from David Smouha as the chief photographer and Kate Davis as the videographer, we arrived at the drop zone at Kingsford Smith Park in Ballina. We were immediately welcomed by our host for the morning, Andrea Lancaster, who quickly made us feel comfortable. She confidently rattled off the morning’s jump agenda, guided us through the required paperwork, smiled a little too crazily for my liking as she popped on the adrenalin-building intro to skydiving DVD for us to watch, and finally had us in our jump gear well before our nerves could send us running in the opposite direction. 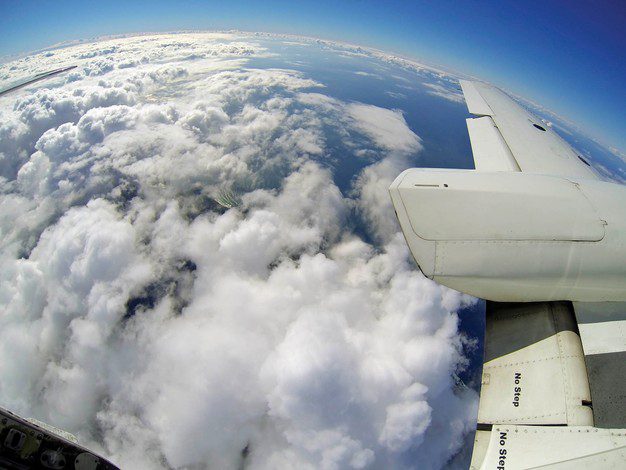 Our tandem jump masters promptly made their entrance – Jade was immediately paired with Adam Hartley, me with the charismatic “W’; both of who were veteran skydivers with thousands of jumps each. Then the ‘James Bond’ of skydiving arrived almost out of thin air, the ultra-cool Joe Stein, part owner of Sky Dive the Beach, chief instructor and current holder of several Australian Parachute titles. 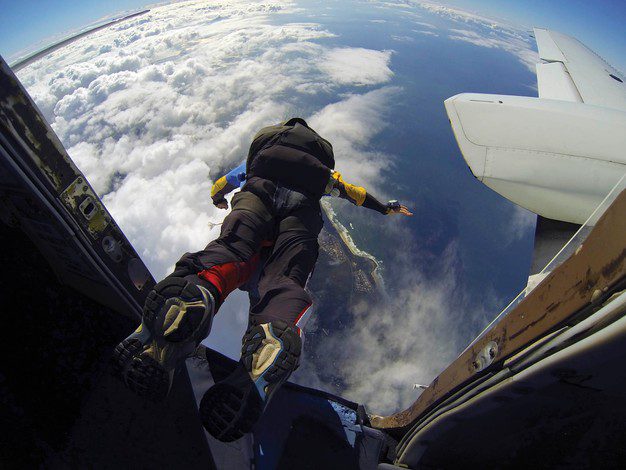 Joe has also well over 7000 jumps credited to his name – his passion for skydiving unmistakable and it seems we were in very safe hands. As our luck had it, this legend of the skies offered to shoot some freestyle photos during the jump to help capture some close-up action shots for Ocean Road Magazine.

Now, fast forward a bit to our leisurely (although perhaps just a little noisy and cold) ascent to 14,000ft, up through the layers of clouds. We were eventually rewarded with one of the most awe-inspiring views of Ballina, the surrounding waterways and the golden coastline.

I’d say that’s a classic example of the calm before the storm!

At this point it might set the scene for you a little better if you can picture in your mind the slowly increasing tension on the faces of the “jumpers”, as Joe matter-of-factly ticks off the various altitudes indicators and counts down the rapidly shortening time until the designated drop zone approaches. 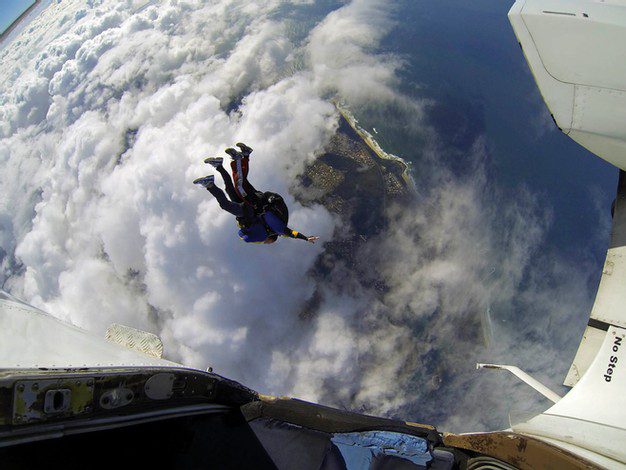 Suddenly we all now have a very clear understanding of just how high this little plane was actually going to go, and with it, the realisation that we were only moments away from leaping out.

The plane door opens, we quickly shuffle nervously towards the edge, I tentatively tuck my legs out and bend them under the belly of the aircraft as previously taught by ‘W’. All is set and then reality slams me in the face as I see the thumbs-up signal from the jump master. “W’ sharply tells me to put my head back and I begin to feel his gentle pressure from behind forcing me slowly out the plane door. 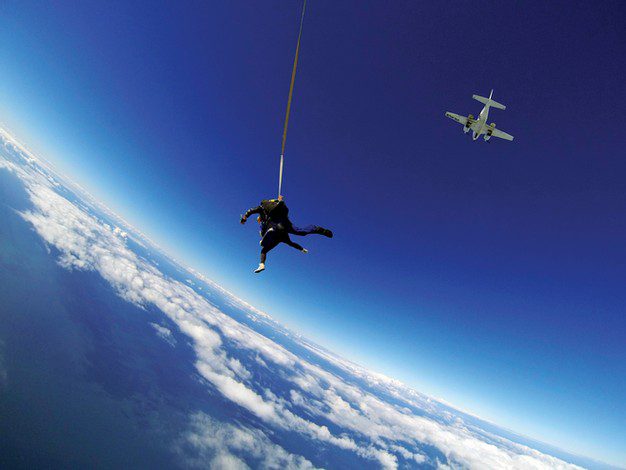 No wait! Hang on! But you already know the rest so let’s take a moment to get another   perspective, in her own words from brave Jade.

“The exact moment I jumped from the ledge of the plane I regretted letting Dad buy the ‘photo and video package’ – that is the little extra memento in the skydiving experience. The first words that came out of my mouth are ones that I thought I had said in my head. My arms were crossed and my eyes shut.  I initially told myself I wouldn’t open them until we had landed.  With my body paralysed with fear and excitement I felt myself falling –  every thought in my mind had disappeared and all I could do was marvel at the idea that I was free-falling through the atmosphere at over 200 km an hour. The jolt of the parachute deploying was one that came with a great welcome – the  idea in the back of my head that maybe, just maybe, he had forgotten to pull the shoot disappeared and I enraptured myself in the feeling of flying.” 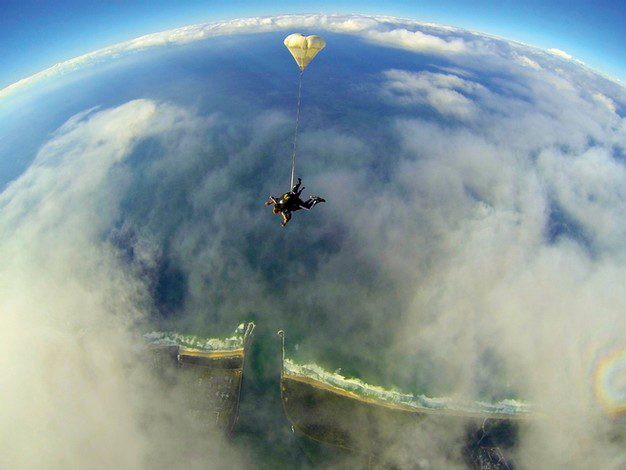 I was the first jumper out of the plane, but on the relaxed glide under full parachute after the initial 40-second crazy free-fall, I looked down and noticed a fast-moving parachutist a fair way below us, skilfully zipping closely across the top of the trees bordering the river and moving towards the marked landing zone on the sports oval.

“That’s Joe,” explained “W”. “He tends to free-fall for just a little bit longer than the rest of us.” After seeing him in action and then hearing that he landed on the run, packed his parachute quickly behind him and disappeared as quick as he arrived, I was not quite sure if he was the James Bond type I first thought, or maybe Australia’s version of “Dynamo Magician Impossible”. Either way, the guy runs a highly professional organisation that fills you with confidence and puts you immediately at ease. 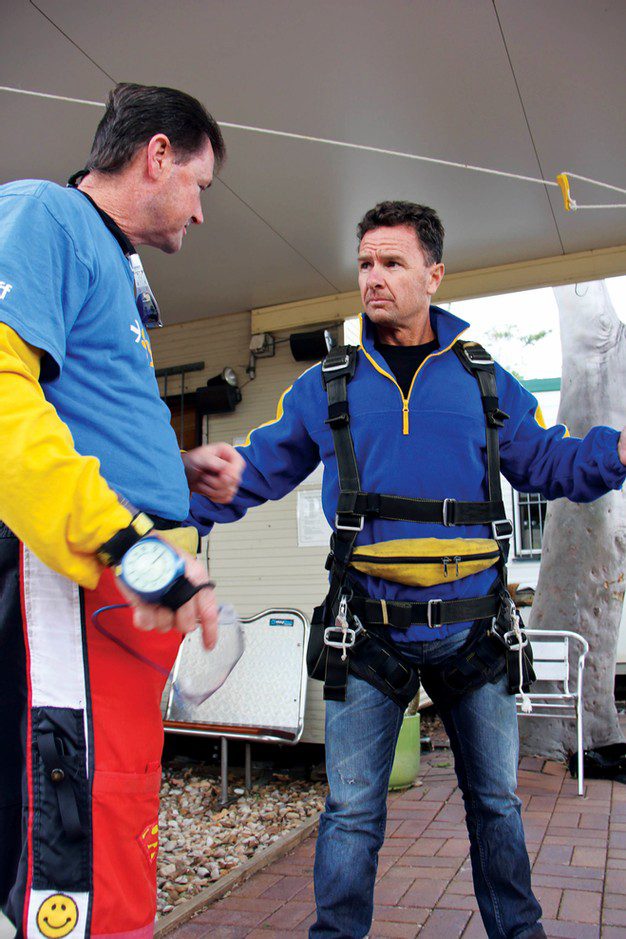 A BIG thanks to all the team at Sky Dive Byron Bay for providing us with a fantastic experience, well worthy of a tick on everyone’s bucket list. The individual jump DVD’s the guys expertly edited to funky upbeat music are amazing and a valuable must-have memory for life. When I watched mine for the first time it immediately took me back to the day of the jump – I could feel the adrenaline start to pump and my heart-rate elevate all over again.

Check out all the video footage on the website (www.oceanroadmagazine.com.au), and then book yourself into one of life’s great experiences.