The ‘dash’ to the Splash 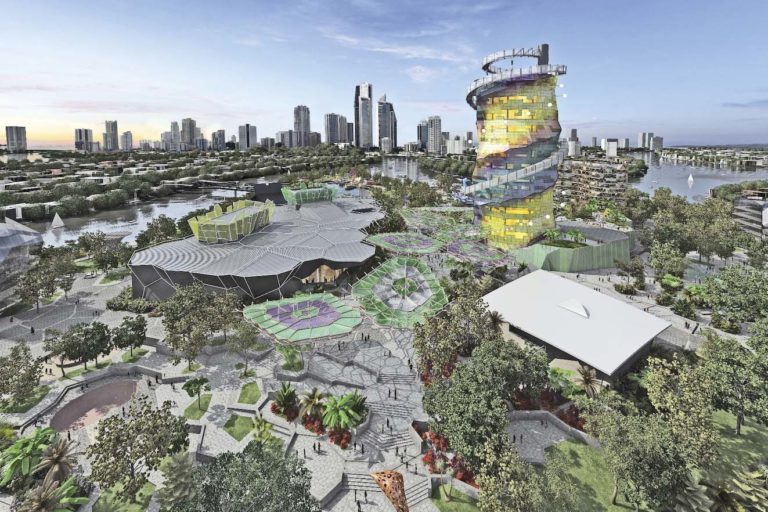 By this time next year, our world-class aspirational city should see construction commence on the long-anticipated Gold Coast Cultural Precinct, allowing the delivery of Stage One in time for the performance of the century: the Gold Coast Commonwealth Games in 2018. This first stage will include three key deliverables: the Versatile Outdoor Space, Riverside Hub and Initial Artscape. These early works also include the recently unveiled Splash – a high-end outdoor public performance venue partly inspired by the success of recent festivals such as GLOW and Opera on the Beach, satisfying a growing appetite for “culture in the fresh air”. Splash enhances the original open-air amphitheatre concept, while doubling as a piece of public art in its own right, evoking an iconic Gold Coast image in a “Serious Fun” way. 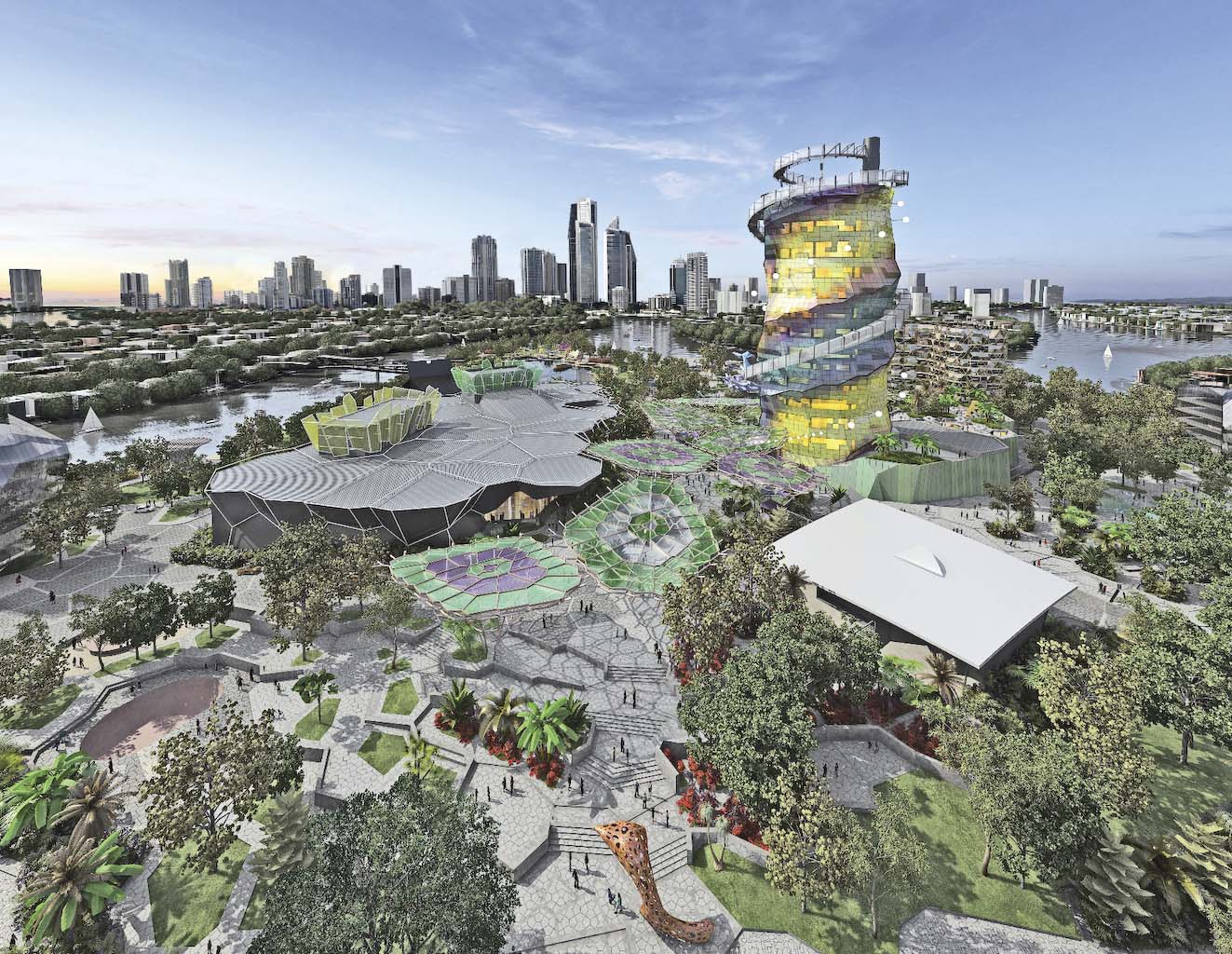 Since its launch a year ago, a rigorous masterplan has been undertaken by winning design team, ARM Architecture, with detailed advice from specialist consultants supporting all aspects of the proposal, particularly the business case. According to Jesse Judd, Project Director at ARM: “These studies have identified the $37 million Stage One works to be the catalyst for the whole site, clearing the way for a brave and bright future”. That future will ultimately yield all of the key elements of the 2013 competition-winning concept, including the tantalising Arts Tower, expanded performing arts facilities and economically-sustaining allied uses. The result envisioned will be a truly around-the-clock cultural well, offering abundant, enriching and enlightening intellectual refreshment to citizens and visitors alike.

However, when I envision our new Cultural Precinct, I am compelled to expand my thoughts to its wider-city context. 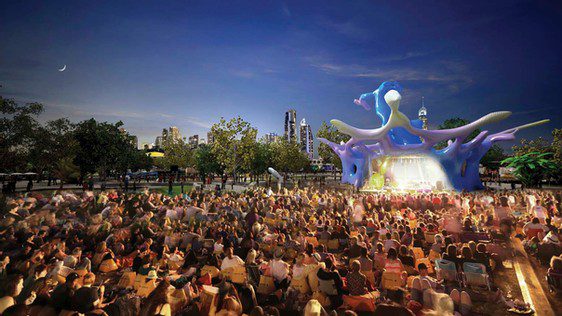 Surrounded by water on three sides, the Evandale site is a microcosm of the Gold Coast, a water-focused city that boasts more canals than Venice. But as much as water connects, it also divides – as do the figurative rivers that flow with a more automotive current – so it is the connections to the precinct, and how it will respond to and invigorate the city around it, that offer the most valuable opportunities for legacy.

In the words of Professor Gordon Holden, FRAIA, the International Design Competition Jury Chair: “The Gold Coast Cultural Precinct offers a tremendous opportunity to both visually and physically connect to the city, not just across the proposed bridge to Chevron Island or even via ferry to Surfers, but also by establishing an urban pedestrian environment to the southwest, where its interface with the new Gold Coast Showgrounds and the existing racecourse precinct will be significant”. The north of the site craves pedestrian linkages as well, which will be delivered as part of the new-look Green Bridge, donning an edgy kitsch character in its refined form. 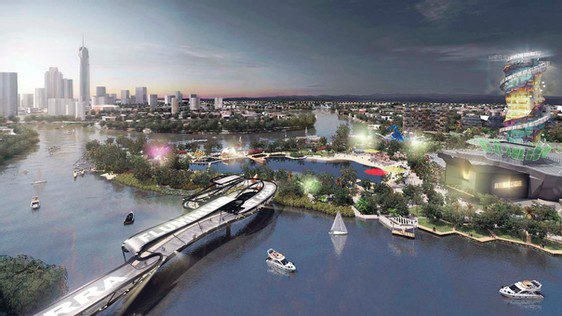 But the theme of connectivity has been evident from day one, displayed through the delightfully dizzying palette of voroni pattern language, a mathematical method of spatial division that results from measuring equal distances to an array of central points. Not only does this paradigm provide the inspiration for beautiful and functional trellises, wraps, filigrees and foils in the built form and landscape design, but it also emphasises the cultural precinct as a central point in the tessellated pattern of our city growth. “Central”, however, is a term currently more representative of the aerial view rather the journey, an aspect of the project that perhaps has the greatest capacity to extend and enrich the cultural experience.

To put it more succinctly, it is as much about the “dash as the Splash” – the enjoyment of the journey via boats and bridges as well as the Beethoven and the Bernini … or even the bungy. 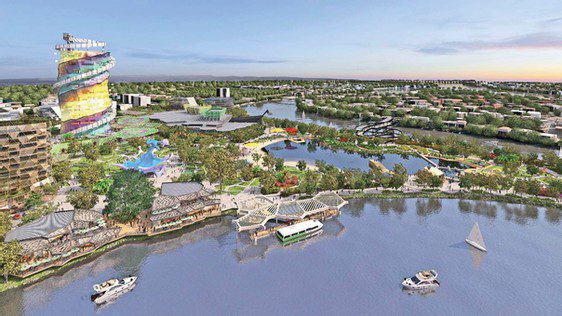 So bring on the “Super 8” inspired Green Bridge, the “Tessellated” Ferry Terminal and all other conduits to culture … the “stuff of cities”. A new cultural horizon of the Gold Coast is dawning, and a sophisticated city will expect, demand and deserve a choice of functional, practical and delightful means of connecting with their new cultural heritage. 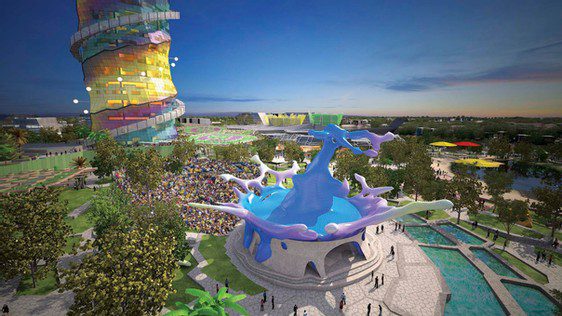