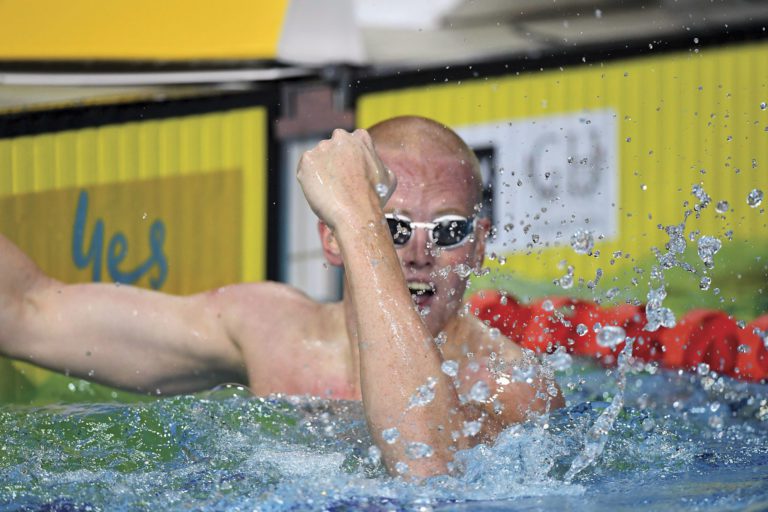 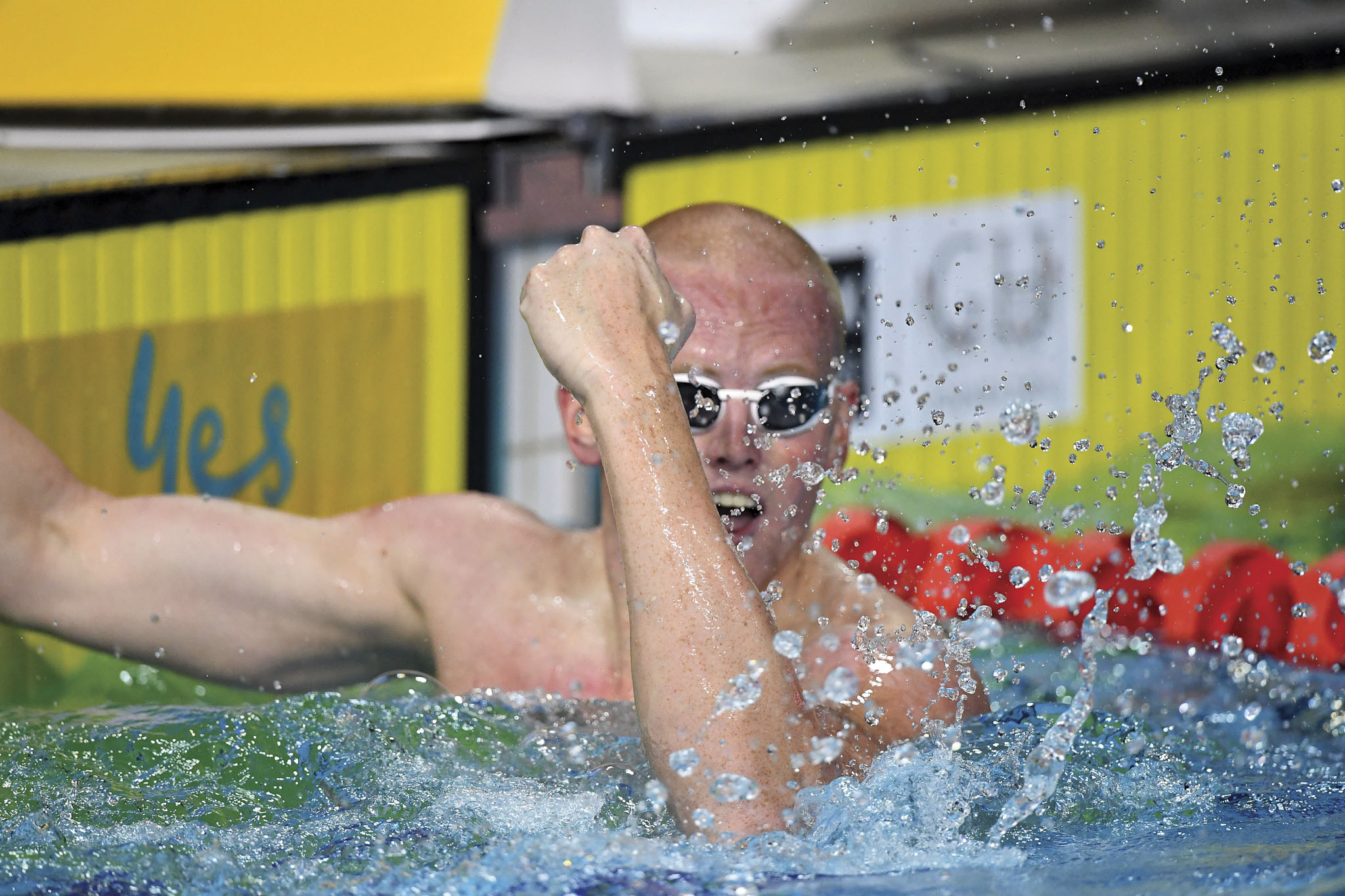 There were tears, cheers, ovations and celebrations after the four-day Hancock Prospecting Australian Swimming Trials heralded in a 70-strong Dolphins Swim Team for this year’s Commonwealth Games. 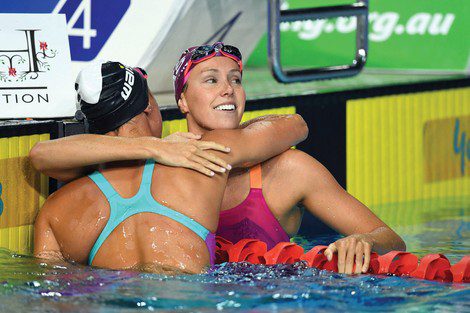 Southport’s Optus Aquatic Centre – the Games venue – provided the ideal backdrop for Australia’s elite swimmers as they powered and ploughed through the water with one goal – to qualify for Australia’s 2018 Commonwealth Games swim team.
“A home team for a home Games!” Has been the catch cry of athletes all round the country and the swim team will now prepare to swim in front of sell-out crowds over six days of the Games between April 5 and 10.
But just making the Australian team was a tough task. 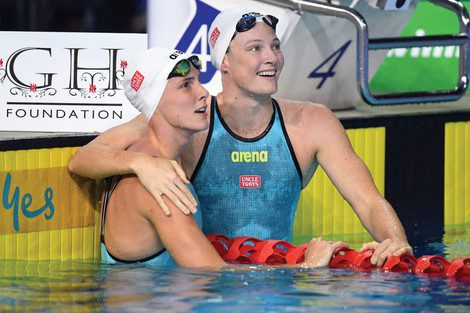 “In some events it’s tougher to make the finals at our Trials as it is to make the Games finals themselves,” said Olympic champion Mack Horton (Melbourne Vicentre), who won his specialist 400m freestyle and finished second in the 200 and 1500m freestyle.
That scenario played out on night one when Brisbane-based 19-year-old Jack Cartwright (St Peters Western) missed the final of the men’s 200m freestyle –unbeknown to almost everyone –the Brisbane teenager had suffered heart palpitations as he swam down the first lap. 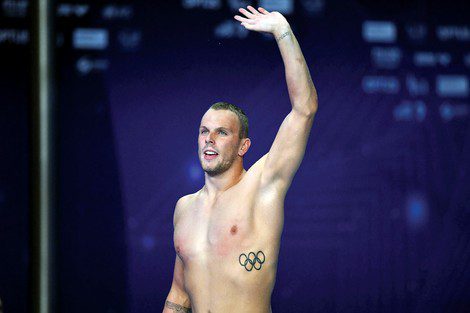 After collapsing on the pooldeck at the end of the race, the Gladstone-born Cartwright spent several hours in hospital before receiving the all-clear to race in the 100m heats the following morning. 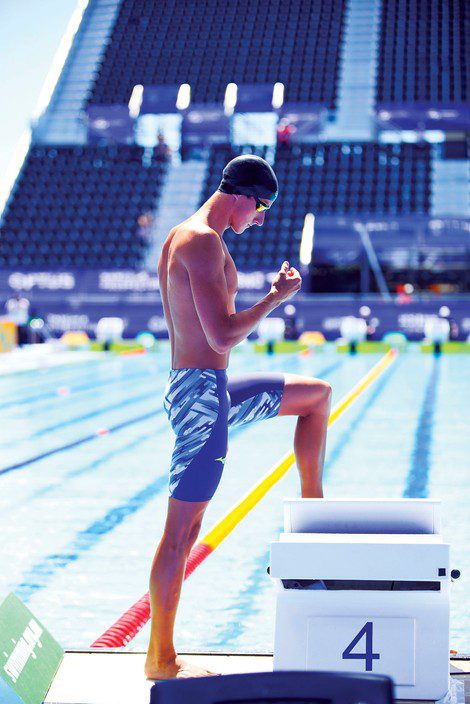 In a nerve-raking wait Cartwright and Olympic champion Kyle Chalmers (Marion, SA) had dead-heated for seventh – claiming the last two lanes into the final.
The pair – who have suffered the same Supraventricular Tachycardia (SVT) condition (where the heart races up to 200 beats her minute) then finished first and second in a dramatic helter-skelter final, with Gold Coast local Cam McEvoy (Bond) third and James Magnussen (Ravenswood, NSW) fourth, to qualify for the team. 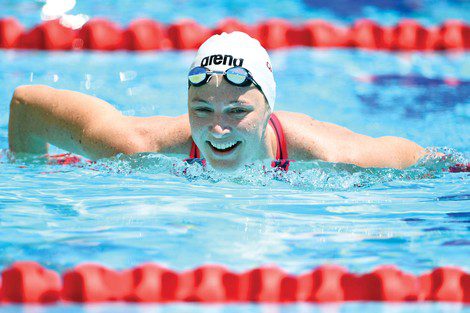 “I got the palpitations in the first part of my 200m heat and it was just very hard to keep going,” Cartwright said. “I spoke to Kyle and he said it’s ‘pretty dodgy’ for that to happen during a race but it’s just one of those things. It feels great to get on the team. I mean my leg had seized up and I was lying in a hospital bed before I got the all clear. I came into the pool around 5pm, had a light swim and a chat to my coach Dean Boxall and I was so relieved to make the final and then make the team – I wasn’t going to miss out – I made sure of that.” 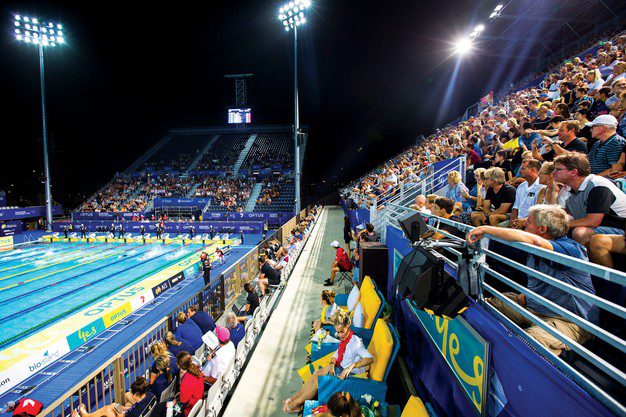 Cartwright, Chalmers, McEvoy and Magnussen will now form a formidable 4 x100m freestyle relay for Australia at the Games – a premier event Australia has only lost once since the original Mean Machine claimed gold in 1982 in Brisbane and that was to South Africa in the last home Games in Melbourne in 2006.
“We don’t want that happening again,” said McEvoy, one of 14 Gold Coasters among 40 Queenslanders on the 70-strong team of 49 able-bodied and 21-Para-sport swimmers on the team. 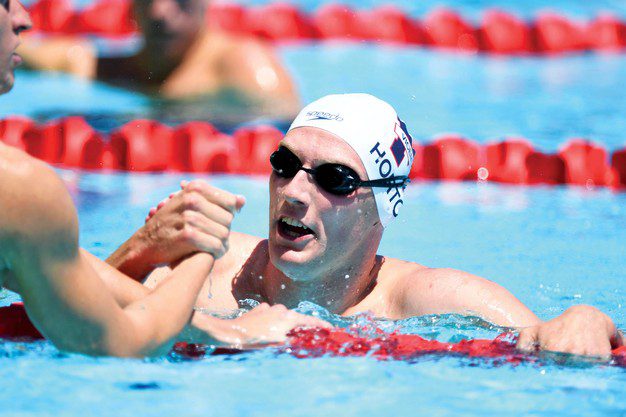 “This is a powerful unit and to win this relay for the third straight Games would be amazing and I believe we have the team that can do it.”
The tears flowed on the first night when 17-year-old TSS Aquatic schoolgirl Laura Taylor wooed the crowd to become the first home grown winner onto the team – and one of four from the Chris Nesbit team which also includes Olympian David Morgan and distance freestyler KiahMelverton.
Southport-born Taylor touched the wall to win the 200m butterfly and the tears erupted in an emotional release from a girl who has worked “so hard” and realised a dream come true in front of her family and friends – a true hometown hero. 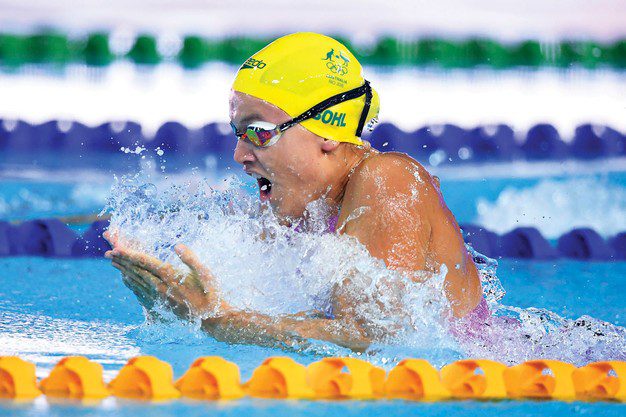 The third 50 metres in a 200m can often be the championship lap and for Taylor, that’s the way it played out.
“When I pushed off the 100 (metre) turn and I was with the girls, I reckoned I could drop them, then at the fourth 50 (metres) I paid for it. It really hurt, but it won me the race,” Taylor says. 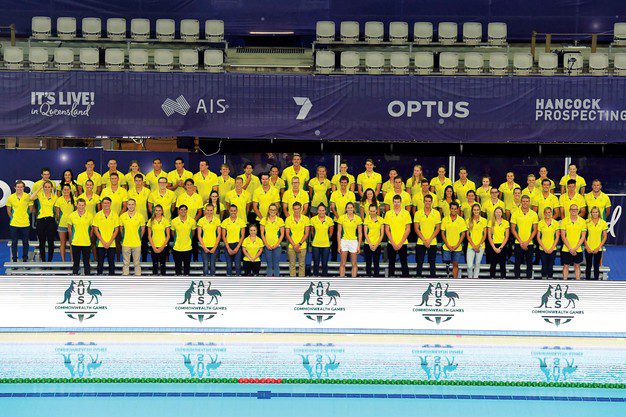 The Northcliffe lifesaver, who started at the club as an eight-year-old Nipper, admitted she was so overwhelmed, so happy for it to be over.
Taylor shattered her own personal best time and swam her way into the Australian All-Time top ten with a world class time of 2:06.80 in what was a Gold Coast quinella with Griffith University’s Emma McKeon finishing second, after she had earlier finished with the silver behind another 17-year-old AriarneTitmus in the 200m freestyle.
It was always going to be a tough double for McKeon in the 200m freestyle (1:56.57) and the 200m butterfly (2:08.80). 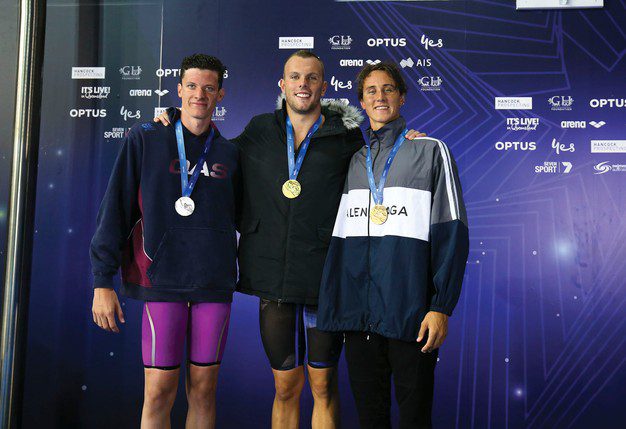 With WA’s Brianna Throssell, Australia will have a three-pronged attack in the 200m butterfly while Olympic silver medallist Maddie Groves (Griffith University, Gold Coast) will join McKeon and Throssell in the 100m butterfly.
McKeon will be joined by brother David– who both starred in the Glasgow Games in 2014 – and along with their father Ron and coach Michael Bohl will turn the clock back to 1982. 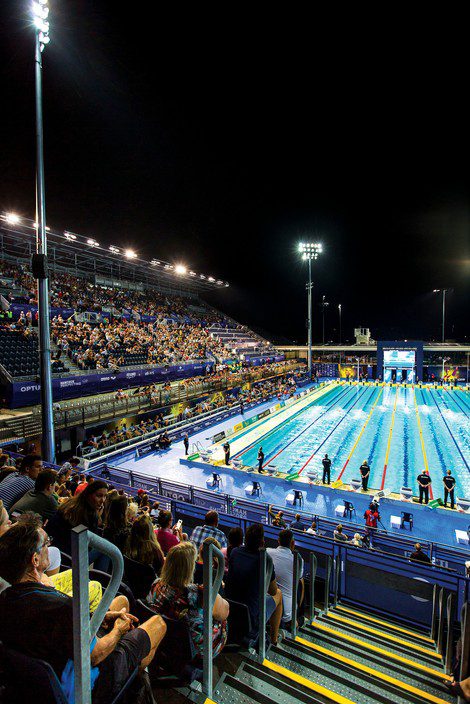 Ron McKeon, his wife Susie Woodhouse were both members of the swim team at the ’82 Games, as was Bohl, whose Rio Olympian daughter Georgia has also qualified for the 2018 team – in a real family affair.
Griffith’s Olympic butterfly finalist Grant Irvine competes the Griffith University qualifiers, while Bond University coach Richard Scarce has put freestylers McEvoy, Alex Graham and exciting teenager Elijah Winnington on a powerful men’s team. 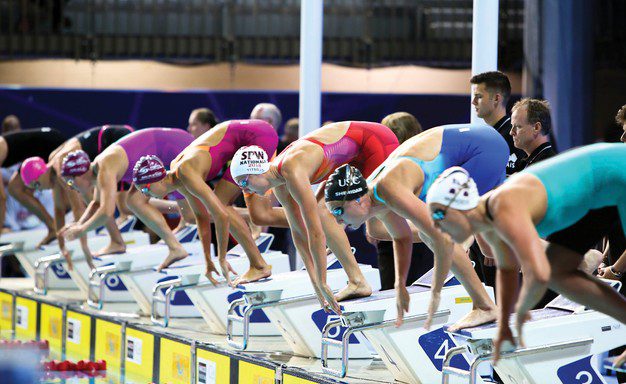 Somerset College, under coach and Olympic gold medallist Ashley Callus, will have dual Olympic freestyler and National 50m freestyle champion James Roberts and defending Games 50m backstroke champion Ben Treffers chasing gold again as will Southport’s Leiston Pickett, coached by Olympic coach Glenn Baker.
The Southport pool graduate will be hunting for a slice of Games history – one of the few to win three gold in a row after her wins in the 50m breaststroke in New Delhi in 2010 and Glasgow in 2014. 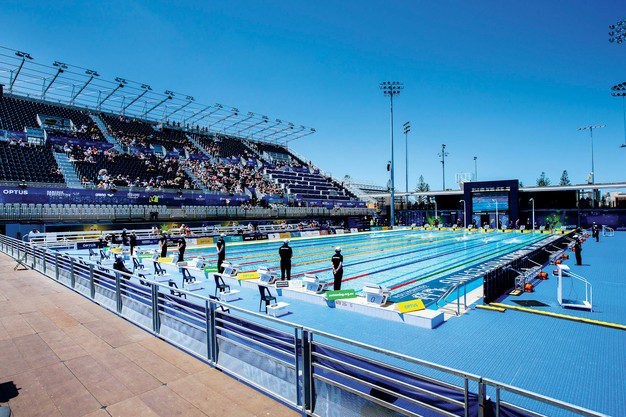 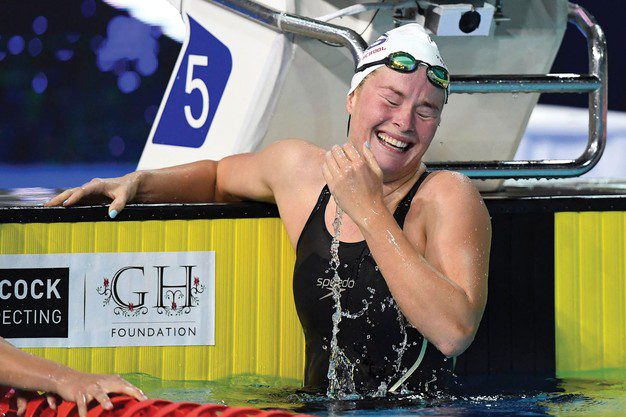