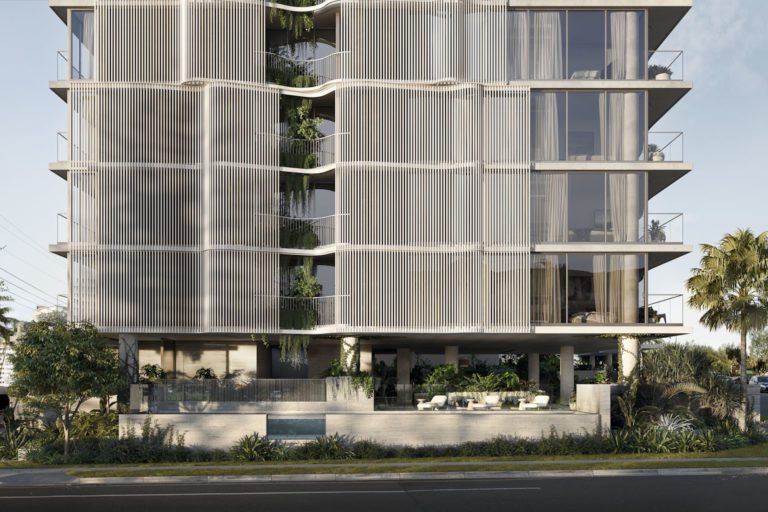 Off the back of the sell-out of its stunning Gold Coast portfolio, Brisbane-based luxury developer Spyre Group has officially been given the green light by the Gold Coast City Council for its fourth high end residential beachfront project.

Spyre Group has received DA Approval for Cala Dei, a boutique beachfront development on the site of the well-known Komune Resort at Coolangatta, which the company purchased earlier this year.

The group plans to carry its winning formula which achieved a sell-out of its three ultra-luxury Gold Coast developments – the $79 million Elysian, $77 million Natura and $25 million MAYA – most of which sold during the midst of the COVID-19 pandemic.

“Cala Dei will deliver the considered approach that has become synonymous with our brand on the Gold Coast – which is to deliver an unmatched level of luxury that is custom tailored to beachfront living, sought by a discerning downsizer market.”

Spyre Group acquired the Coolangatta site in an off-market deal and has pivoted to take a significantly different approach to the 27-storey tower proposed by the previous owner.

The project’s amenities are set to simulate that of a luxury retreat, redefining what is generally excepted as ‘resort style’ comforts. A pool, spa and sunbathing deck are tied together by a seamless water feature, while an expansive dining and entertaining precinct is framed by lush greenery.

“What makes Cala Dei most unique is its responsiveness to its surrounds,” said Mr Malouf.

“A major key to our success on the Gold Coast has been the ability to secure the best beachfront sites in unique and highly sought-after locations.”

Through a discerning approach to developing high-end, design-led residential projects, the group has become one of the most active and successful developers along the coastal strip.

Blending with the city’s natural surrounds, its contemporary designs offer refined and relaxed beachside living and have captured the imagination of local downsizers and interstate buyers drawn to a luxurious yet laidback lifestyle.

High demand for ultra-luxe residences in premium locations has driven a significant expansion of Spyre Group’s activities on the Gold Coast, with Cala Dei tipping the value of complete and future projects over the $320 million mark across the city’s most elite beachside suburbs.