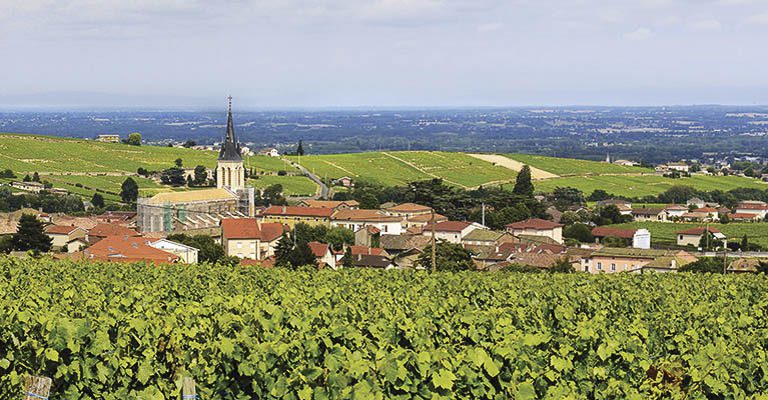 Highly aromatic with a fabulous nose, but light in flavour — ORM takes a closer look at (and taste of) gamay.

There was a time, and it must be added here many, many, many years ago, that I thought Beaujolais wine was made from pinot noir. Surely you all thought that too, right? No?

Turns out Beaujolais is not made from pinot noir, but rather from a grape variety called gamay. How embarrassing!  However, I take some comfort from the fact that gamay is both a cousin of pinot noir, has its origins in Burgundy, France, just like pinot noir, and that the grape variety is often referred to by its French regional name of Beaujolais and not gamay.

Gamay is a noble red variety and dates back to the 14th century and is grown widely in France, including the region of Beaujolais. Specifically, gamay was said to have been discovered in the village of Gamay around the 1360s. The grape variety is thin-skinned like pinot noir, yet plump, and ranges from violet to purple or even black in colour. The berries are oval in shape and can also range from small to long clusters in a bunch. Like many red grape varieties, the pulp is colourless but may vary in shade depending on the clone type — and by the way there are more than 35 gamay clones.

The variety is high-yielding; however, in spite of this, gamay is prone to disease, rot and is also sensitive to frosts. Naturally, gamay suits colder climates and is clearly not suited to extremely hot conditions or climates, exactly like pinot noir.

Interestingly, gamay is highly aromatic with a fabulous nose, but light in flavour. Known for being delicate and light in body too, gamay on the nose has notes of pear, violets, raspberry, pepper, and shares similar strawberry notes to pinot noir. However, on the palate one can find flavours of banana, bubblegum, fig, or black pepper and chalk in many premium gamay.

Note, bubblegum and banana nuances come from the wine-making process known as carbonic maceration, which many of the simple styles of Beaujolais undergo. The process involves fermenting whole grapes under pressure using carbon dioxide gas before the grapes are crushed.

This process ferments the juice while still inside the grape, causing the grapes to explode thus producing wines with intense fruity notes, low tannins, and a simple palate structure. On the other hand, premium-quality Beaujolais known as Cru Beaujolais undergoes more tradition Burgundy wine-making techniques, which tend to produce wines that are rich, dark (but not always), complex, and age-worthy.

Wine made from gamay is usually both light in colour and body, dry, possessing medium-strength fruit aroma, high acidity, and low tannins. These very characteristics make many of the wines soft, pretty, and approachable.

Gamay wines are also often best served young, and some are more suited served chilled. But be warned, not all gamay or Beaujolais are light and refreshing, as some of the Cru class wines (premium-quality wines) produce dense, complex, and age-worthy wines.

Gamay loves granite-based soils and schist (decomposed rock), which are found in its ancestral home of Beaujolais, but adapts well to clay and limestone soils. Generally speaking, cool climates with slow-ripening conditions suit this variety. And in Beaujolais under their strict appellation laws, the grapes must be picked by hand. It makes sense really, as the grape is thin-skinned and the gamay vine is rather delicate, with shallow roots, and would not suit the rigours of mechanical harvesting.

Where does gamay grow best

As previously mentioned, the best examples of gamay grow in the southern part of Burgundy in an area that is just 55km long and around 14km wide, and this region is called Beaujolais. Most of the vineyards are planted on the hillsides, and elevations can range from 300m to 500m.

The area is known for its granite-based soils, a semi-continental cool climate with slow-ripening conditions. The area is quite large, with more than 19,000 hectares under vine. Beaujolais is also known for having the most densely planted vine ratio compared to any other wine region. This region produces more than 130 million bottles per year from approximately 3000 estates.

Under French law, Beaujolais has three quality classifications, which are Beaujolais AOP, Beaujolais Village, and Beaujolais Crus. Cru Beaujolais is the highest classification, and there are 10 Crus producing areas/villages in Beaujolais, with one being very different from the other. Specifically, the 10 Crus are Fleurie, Chiroubles, and Saint-Amour, which tend to produce light more elegant styles. Chénas, Côte de Brouilly, and Régnié produce wines that are usually medium in weight in both aroma and palate.  Finally, the remaining four areas — Brouilly, Moulin-à-Vent, Juliénas, and Morgon — produce the biggest and boldest of styles.

Indeed, the world-renowned wine critic Jancis Robinson states, “The most substantial examples are from the Crus of Brouilly, Moulin-à-Vent, and Morgon and can age up to 10 years and start to taste more like mature pinot noir.”

I for one am a massive fan of Morgon Beaujolais.

Around the world, gamay is also flourishing in many areas, including Switzerland, Canada, USA, Italy, Australia, and New Zealand. Here in Australia, the variety grows best in our cooler regions of Tasmania, Canberra, Granite Belt Queensland, Mornington Peninsula, Geelong, Macedon Ranges, Adelaide Hills, Yarra Valley, and Beechworth, but gamay can also be found in the warmer areas such as the Hunter Valley, Riverina, Heathcote, Rutherglen, Margaret River, and McLaren Vale. Australia now has more than 40 gamay producers, with the bulk of them coming out of Victoria.

If you like pinot noir, chances are you will like gamay. The variety suits our climate, lifestyle, and our foods. Like many of the varieties written about in this magazine, gamay is versatile, can be consumed young and fresh, and is reasonably priced.  In particular, gamay offers a range of pleasures suiting young or inexperienced palates, with easy drinking pretty wines to the more bold and complex wines for the experienced wine drinker.

When it comes to food pairing, gamay is also a winner offering versatility and approachability. Light food calls for light wine, and lighter-style gamay is perfect as an aperitif, picnic wine, or easy drinking with summer salads or simple lunch fare.

Due to its high acidity and lower tannins, it works well with seafood, including salmon, barramundi, calamari, prawns, sushi, and sashimi. You will not be disappointed with gamay and a charcuterie board of cold cuts and pates.

Like most wine, gamay is particularly suited with cheese, including brie or many other mild cheeses. Try gamay with roast chicken or turkey (think Christmas lunch), veal, or even pork and lamb.

With the bold Cru Beaujolais or bigger-bodied gamay, think duck, lamb tagine, or grilled meats and sausages, which are an ideal match. Ever tried gamay with Chinese food? OMG, so good!!

One should try a gamay from Morgon, the second largest of the Cru Beaujolais. There are about 250 producers based in this part of Beaujolais, and Morgon gamays are deep in colour, age-worthy, rich, and bold, and are not dissimilar to good pinot noir. I prefer the wines made from the hillside of Côte du Py in Morgon, as they are big and powerful deriving their strength and power from the high concentration of schist and manganese in the soil.

Of particular interest is the Domaine Louis-Claude Desvignes Saint-Vincent owned and operated by eighth-generation vigneron-winemakers brothers Louis-Benoit and Claude-Emmanuel Desvignes. The family has been making wine since the 1700s, and the brothers own about 13 hectares of land, which is organically farmed and maintained.

Domaine Louis-Claude Desvignes Saint Vincent comes off 45- to 60-year-old vines, receives no oak treatment and contains 50 per cent destemmed fruit, which has undergone semi-carbonic maceration. The wine is bright ruby in colour, with red berry and lavender notes adding to the array of exotic spices on the nose. The palate is fleshy yet grippy from the fine tannins, finishing with a clean minerally edge. Only 2000 cases of this wine are made yearly, and it particularly pairs well with roast lamb or Asian curry.

From New Zealand’s Hawkes Bay look out for a gamay from Te Mata vineyards. Hawkes Bay is New Zealand’s second-oldest wine region and was established around 1851. The area is approximately 50km by 30km in size, so just slightly larger than Beaujolais. Soils range from limestone and sand to clay loams and free-draining gravels.

The history-rich and iconic Te Mata vineyards were established in the 1890s and are clearly some of New Zealand’s oldest. The gamay from here receives a combination of both carbonic maceration (45 per cent of the grapes) and a traditional warm red winemaking fermentation (undergone by the remaining 55 per cent).

Te Mata gamay matures in old seasoned French oak for about 11 weeks. The wine is a deep crimson red colour and shows notes of candied apple, strawberry, and star anise. On the palate, the wine is light but rich in red berries, silky with fine chalky tannins. It goes particularly well with spicy Asian food.

From Australia, I really like the Rising Gamay, a wine from Victoria’s Yarra Valley and made by Tom Belford of Bobar wines. Tom is a graduate of Charles Sturt University and is particularly inspired by the wines of Beaujolais. Based in Yarra Valley since 2004, he makes wines that are expressive of the vineyard, using natural and minimalist winemaking techniques.

Yarra Valley is Victoria’s first wine-growing area and was established in the early 1850s. With very close proximity to Melbourne, the region boasts more than 90 cellar doors. Yarra Valley is a cool-climate region, with vine-growing elevation points of up to 450m, and the soils vary from red volcanic, dark grey, clay to sandy free-draining.

Tom’s gamay undergoes a ferment using about 20 per cent whole bunch — he foot stomps and leaves the fruit to macerate for about 10 days. The juice is then transferred to old puncheon barrels (around 500 litres), with no added sulphur, and is matured for five months. The wine receives a light filtering and sulphur treatment at the time of bottling. Ruby red in colour, there are notes of cherry, herbs, and poached pear on the nose and palate. Medium-bodied with fine tannins, the wine is a must with smoked meats, pate, grilled chicken, turkey, or middle-eastern fare.

Peter Panousis works for Mezzanine Wine. He has a degree in hospitality, is WSET-trained and has undertaken extensive wine education. Raised on the Gold Coast, Peter is an experienced operator of restaurants and cafes, which has included owning two award-winning restaurants. Peter is also a member of the Australian Society of Viticulture and Oenology (ASVO) and an Associate Fellow with the Australian Institute of Management (AIM).