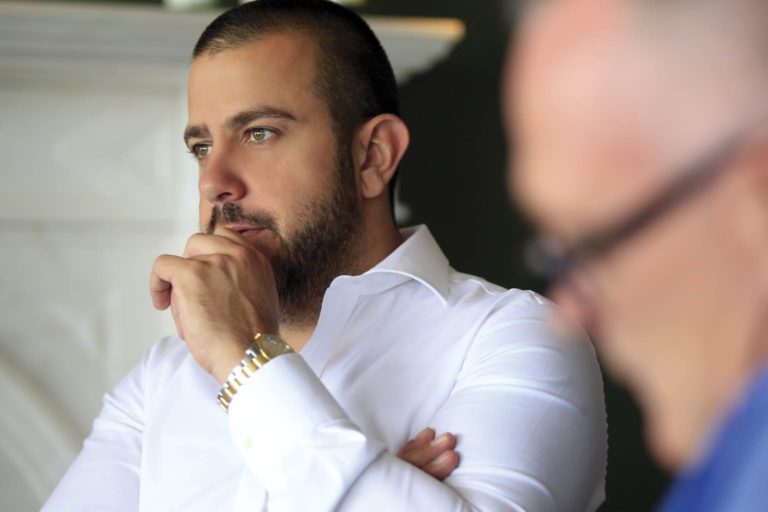 Every day at The Fish House, overlooking beautiful Burleigh Beach, you’ll find an array of discerning diners enjoying a sumptuous selection of seafood. The well-known, well-heeled, well-off, well-travelled and well-respected draw inspiration from the powerful peal of the Pacific Ocean.

We’re here for our quarterly Ocean Road catch-up with Gold Coast restaurant royalty Simon Gloftis – a man on a mission to highlight all that is great about our dynamic piece of paradise in the hope of inspiring a new wave of entrepreneurs to help shape its future. The third guest at the table is Rebecca Frizelle who’s keen to discuss business, success, and what lays ahead for the Gold Coast. 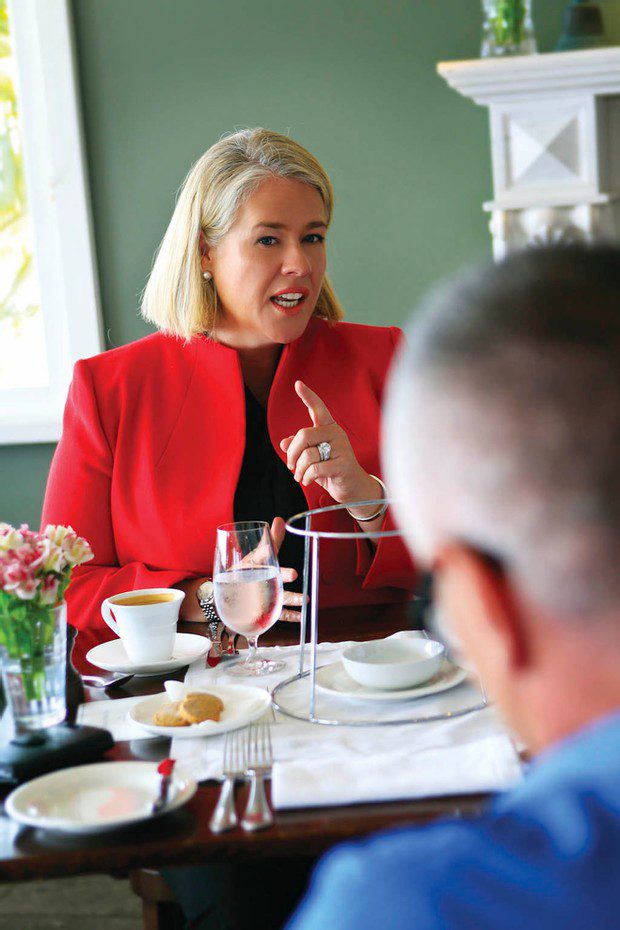 Many who have met Rebecca Frizelle would agree her infectious energy, unbridled enthusiasm and proven abilities in the cut-throat world of new and used cars is undoubtedly deserving of the title ‘motor industry matriarch’. It’s just that such a simplistic appellation risks selling her a long way short.

Indeed, there is much more to the woman who, aged only in her early 40s, is so widely described as an “outstanding business executive” and an “automotive industry icon”.  Extremely likable and personable, Rebecca is the Group Operations Director of the James Frizelle Automotive Group – one of the biggest companies of its type in Queensland, now with six locations spanning from the Northern Rivers all the way to Springwood.

She’s also the Dealer Principal of Audi Gold Coast, chairwoman of the Gold Coast Titans and, perhaps most importantly to her, the proud mother of three children.

But that barely scratches the surface.

Rebecca is also a committed leader of our dynamic community and a supportive advocate of the value of self-confident, self-aware young women. She is treasured by a legion of loyal friends for her genuine passion for fun and, of course, her close-knit family.

Although modest about her growing list of achievements, not even Rebecca Frizelle can dispute that another reason she is so widely revered is the fact that she is so remarkably humble. 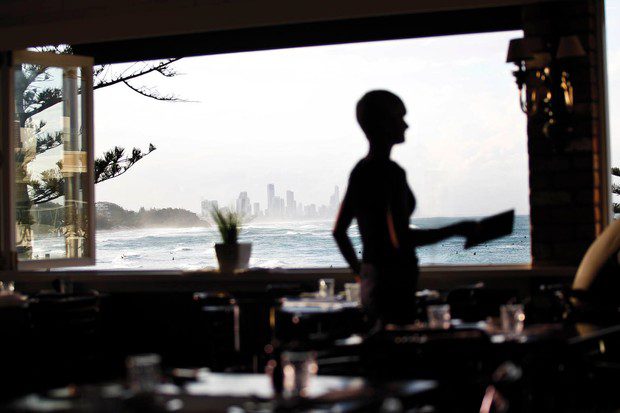 She is quick to pinpoint the most obvious parallel between the automotive and hospitality industries: hyper-competition; and it’s here that she speaks with all the confidence of someone walks their talk.

“Quality and consistency…they are two very important attributes for any business if they are position themselves for growth,” says Rebecca. “You can always expect great food, great service and great value when you come to The Fish House, it’s what you get when you come to (Simon’s award-winning Nobby Beach restaurant) Hellenika…and it’s reflective of what I believe you can rely on when you come to Frizelles.

“When you’re in business you have to earn people’s trust. You earn that trust by being genuine, by being committed to quality and by being consistent in delivering that quality. You have to be absolutely committed to doing all you can to deserve and maintain that trust, day in, day out,” she says.

This is much more than sales/management-speak;  it’s an ingrained ethos that Rebecca, her much-loved father-in-law James and husband Brett share with every one of their 700 employees on their very first day with the company which has an extensive offering spanning Audi, Mazda, Volkswagen, Hyundai, Chrysler, Jeep, Dodge, Skoda and Isuzu UTE, Volkswagen Commercial, Isuzu Trucks and New Holland, in addition to a huge range of used vehicles as well as an award-winning service and parts department.

Confidence, especially in the Gold Coast’s future, is something Rebecca says we must instil in ourselves as residents just as much as we must in the investors we try to woo if we are to achieve our potential as a major international city. 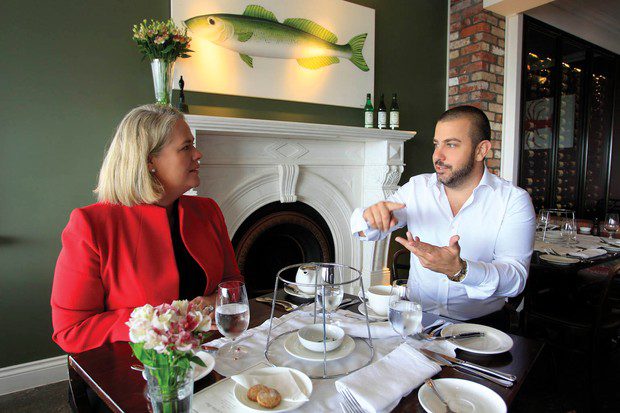 “It’s like we are half-pregnant,” she says. “We have massive opportunities for investment in education and health – two sleeper pillars of our economy – and to leverage them for growth in the tourism sector. But we must start believing in ourselves so we can press ahead and realise the opportunities in front of us so that we have those lasting legacies of the 2018 Commonwealth Games.

“We, as a community and tourism destination, have to see that we must continually reinvent ourselves – visitors do not expect to come here for three-storey walk-ups.”

This is a contentious point and leads directly to the sometimes irrational debate about future development at The Spit and Wavebreak Island on the Gold Coast Broadwater. Rebecca agrees that development there needs to be controlled to preserve the city’s unique offering but within reason.

“I get really frustrated by the vocal minority sometimes,” she says. “Too many of us are too silent on issues that really matter – there needs to be more flexibility, not the bullyboy tactics we are seeing.”

She speaks passionately about Sunland’s ground-breaking $600 million, 44-storey, two-tower development and cultural precinct at Mariner’s Cove at The Spit, adjacent to Sea World, which would feature 69 boutique hotel suites, 370 apartments and the city’s first privately-owned cultural precinct with an art gallery, museum and outdoor sculptural garden, as well as an underground aquarium and 1950sqm of ground floor retail and dining space.

“(Sunland’s) Soheil Abedian knows the Gold Coast and deserves our faith that he will do the right thing – he built the Q1 and Palazzo Versace and both are iconic drawcards for the region,” says Rebecca. 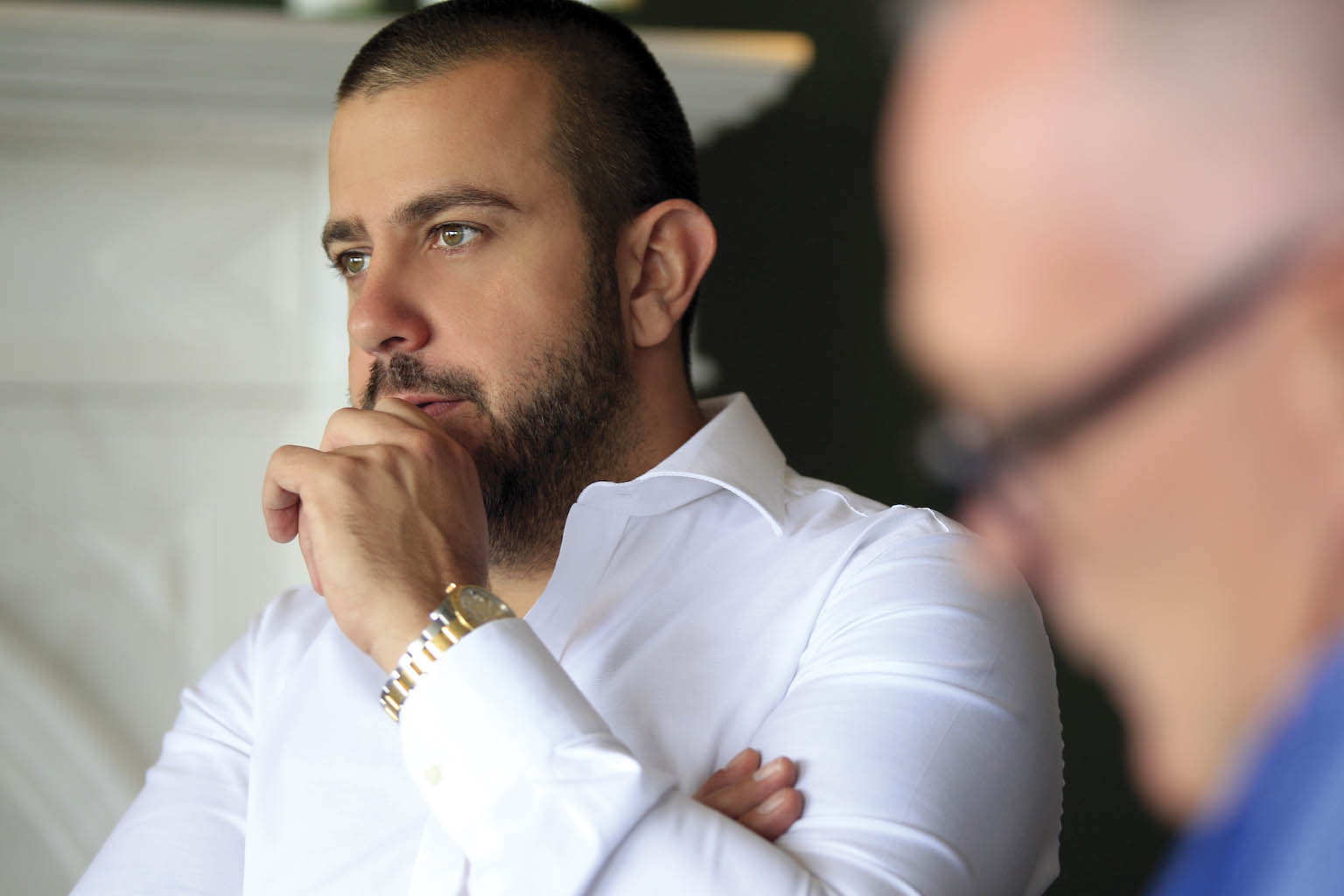 The Spit has also been earmarked as the potential site of a second Gold Coast casino, and Rebecca admits that, through their timely 18-month lifeline sponsorship of the Titans, she has formed a close relationship with Tony and Justin Fung of the Aquis Group, which is hoping to redevelop the Sheraton Mirage resort after purchasing it in a $160 million deal.

“These are really good people and they are also sophisticated, responsible international resort developers who are committed to bringing jobs and opportunities to the Gold Coast,” says Rebecca.

“But look around, there are many areas of the Gold Coast that are under-utilised – look at the parkland just north of the Southport Surf Club, across from the Yacht Club, there’s an area that I drive past regularly and think how we can possibly use that better as community space so people really get to enjoy it. I’d suggest that one summer we trial pop-ups there to see how it goes, because it seems wasted as it is.”

Simon has been biting his tongue: “I also believe that change for the Gold Coast needs to be controlled so that it doesn’t get out of hand but let’s be frank about it: Spain has more of a beach culture than we do…and we have the beaches! 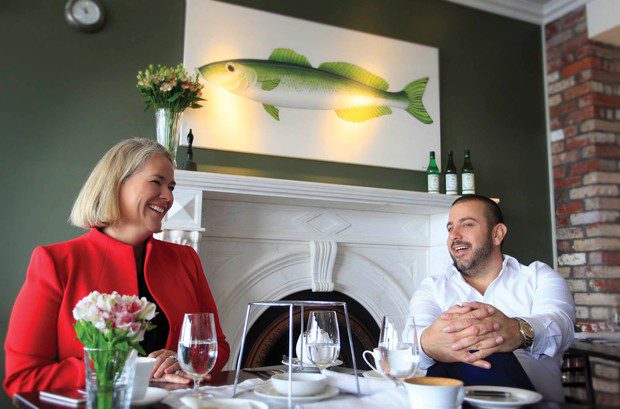 “Too many people are quick to rubbish others when they present their visions for a greater Gold Coast but we are lucky we have a proactive Mayor in Tom Tate whose door is always open to those who want to have a go, those who understand the Coast is growing up and who want to invest in our future.”

Rebecca adds: “People were quick to rubbish the lack of car-parking at the Cbus Super Stadium when it was built but we are now starting to realise that we Gold Coasters have to use public transport as we continue to grow. The stadium was probably 10 years ahead of its time but it will be used to its full potential for many years to come – interstate and international visitors are used to using public transport and they are stunned by the quality of our facility.”

She also says Southport will continue to grow as commuters – private and public sector employees as well as students – use the light rail network to its full potential. “I believe Southport has a real future – take a look at the development of the Chinatown precinct and the high-rise developments happening there.

“The Coast is finally growing up. Like Simon and his restaurants, Southport is always evolving to keep pace with ever-changing consumer expectations – perhaps now he has such a firm foothold in the south of the city, when is Simon going to look at Southport for his next restaurant. That’s the question everyone is asking.”

This draws a wide grin from the man acclaimed – through the incredible success of The Fish House and Hellenika – as resurrecting the Gold Coast’s reputation as a genuine dining destination.

“I’m working on a few things,” he says. “I like to do a lot of research and planning before I do anything so that I do it well, as you know. I’ll let you know when I’m done.

“I’d just like to say that I invited Rebecca to come here to talk with us because she is not just one of the most successful and most driven people on the Gold Coast, she is also one of the most respected.”

“Well, none of my kids still don’t listen to me,” Rebecca laughs. “But, you know, when I came here as a child in 1978 we were still building the waterways and there were no theme parks and no real tourist attractions – just The Wax Museum.

“Look how far we have come…and imagine how far we will go in the future!”