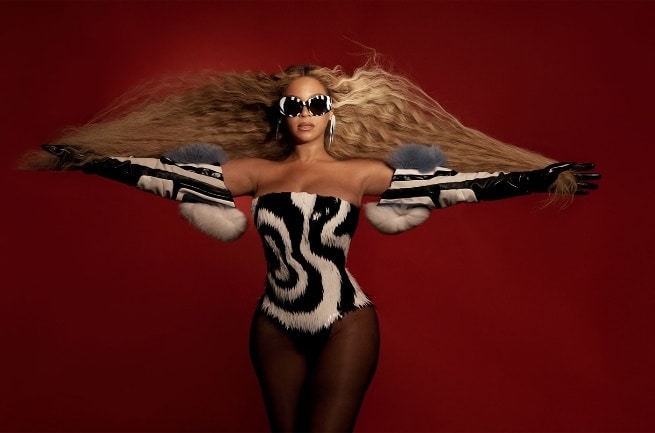 A Costumier at Queensland Ballet has hit the jackpot with superstar Beyoncé wearing a design from her latest collection.
Queensland Ballet Costumier and award-winning designer, Bethany Cordwell woke up on Friday, the morning of Beyoncé’s Renaissance album release, to the news that Beyoncé was indeed wearing her bodysuit and earrings.
Made from 12,000 hand-cut scales cut from plastic document folders, the hypnotic bodysuit took one month to pull together and is part of her Warped Observance collection.
Cordwell said that she is still in shock that Beyoncé is wearing her designs in the high-fashion renaissance look.
“I couldn’t believe it! It still doesn’t feel real. She looks incredible in my bodysuit and earrings!” said Ms Cordwell.
Earlier this year, Cordwell was contacted by Beyoncé’s styling team asking for the bodysuit.
“I was in absolute shock… I quickly replied and we started discussing further details instantly. The initial email came through as I was getting ready for what I thought was going to be just another day at work.
“The lead time was tight. I wasn’t able to make a custom bodysuit specific to Beyoncé’s measurements due to time constraints. Thankfully they accepted my existing bodysuit which was sent express to LA,” explained Ms Cordwell.
At Queensland Ballet, Cordwell received many accolades from her colleagues including Queensland Ballet’s Head of Costume, Lauryn Jackson.
“The team and I are so proud of Beth for her recent achievements. All her hard work over the years has truly paid off,” said Ms Jackson.
“I was surrounded by incredibly excited dancers, costume department team and other Queensland Ballet staff who were all so lovely and supportive towards me and my exciting news,” said Ms Cordwell.
Since the release, Cordwell has been featured in British Vogue, Vogue Mexico, Vogue Taiwan, Dazed and Grazia. The image is also being used on Apple Music and iTunes.
“To be sharing this moment alongside incredible designers who I have looked up to my whole life is truly unbelievable” concluded Ms Cordwell.
In November 2021 Cordwell won the Emerging Designer Award at Fashions on the Field at the Melbourne Cup.

Bethany Cordwell grew up in Cairns, moving to Mackay as a teenager for her high school years. She did an Honours degree in Design at QUT and has been with Queensland Ballet since 2019.