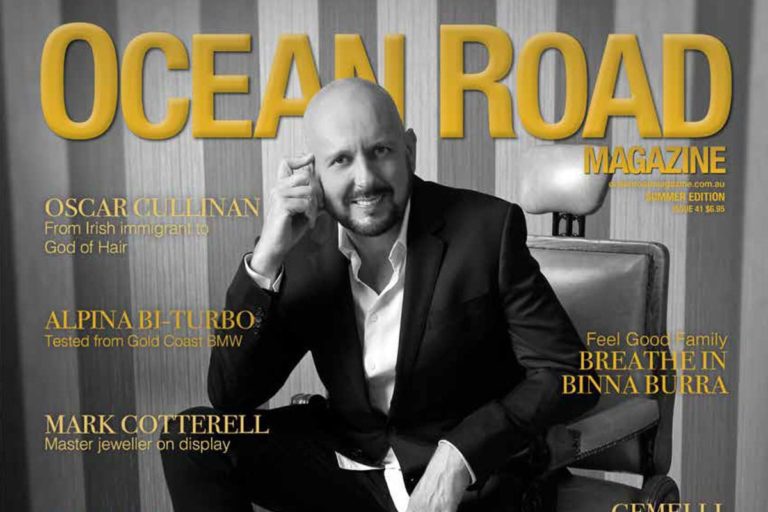 FOR a tearaway Irish lad kicked out of school for getting up to ‘a bit of mischief’, Oscar Cullinan has done pretty well for himself, to be sure.

With a chain of 14 Oscar Oscar hair salons boasting a celebrity clientele, a beautiful beachfront home on the southern Gold Coast and a farm near Byron Bay – where he’s started growing hemp for the booming medicinal cannabis industry – Cullinan is the classic Aussie immigrant success story.

It’s been more than 30 years of hard work, with maybe just a dash of Irish luck, that has brought the man dubbed the ‘God of hair’ to where he is today, some three million hairdos since opening his first salon.

Cullinan pulls into the driveway of his Tugun home in a shiny black Porsche with personalised ‘IRE’ plates – a nod to his gorgeous emerald homeland – for the Ocean Road interview. Dressed stylishly in an olive green shirt, slacks and black Gucci loafers, Queensland’s coiffure king greets me with a still-strong Irish lilt that more than three decades in Oz has mercifully failed to dull.

We take the black and white tile-floored lift up to his chic rooftop bar, with views over the shimmering Pacific, and pull up a seat on the deck to soak up the view and ocean breeze – a cooling respite on this hot-as-Hades summer’s day. The down-to-earth Cullinan was born and raised in rural County Clare, famed for the Cliffs of Moher, on Ireland’s rugged west coast.

“I sort of fell into hairdressing by default,” he says with a chuckle. “I was thrown out of school for getting up to a bit of mischief and didn’t really have too many choices.”

His brother and girlfriend ran a hair salon and Cullinan started out sweeping the floors before learning the trade and travelling to London and later the US. He arrived in Australia in 1987 and lived in Melbourne and Sydney, working in salons on trendy Chapel St and in Double Bay.

“Then I moved up to Brisbane in the late 1980s and that’s when I started Oscar Oscar,” he says proudly.

“I opened my first salon at Broadway on The Mall in 1989, then a second and a third salon in Brisbane in the mid to late ‘90s. I opened the first Oscar Oscar salon on the Gold Coast at Pacific Fair in 2001.”

The same year, Cullinan was named Australian Hairdresser of the Year (an honour he won again in 2005), and his empire took off, expanding to Sydney and Melbourne.

Today, there are 14 Oscar Oscar salons (including five in Brisbane and three on the Gold Coast, as well as a training academy), employing more than 200 staff.

“Our Melbourne salons are going crazy now that the (COVID) lockdown is over and Brisbane and the Gold Coast are powering for us. We’re very fortunate here in Australia compared to the rest of the world, which really got hammered by COVID.”

I ask Cullinan if he sees himself as a sort of modern-day Stefan, Queensland’s hairdressing icon of the 1980s.

“With no disrespect to Stefan, he was very mass market – I guess we’re the high end, the luxury end of town,” he says.

Cullinan and his team regularly figure in the Australian Hairdresser of the Year Awards and his salons are sought out by celebrities including Paris Hilton, Courtney Love, Jade Jagger and Miranda Kerr.

With a hard-won reputation for world-class service, Cullinan says his business success has been built on a unique ‘partner’ concept, where the salons are individually run by owner-operators.

“It’s very, very different to franchising – in fact, worlds away,” he says

“Our owner-operators get 50 per cent share of the profit, so it’s very fair. It’s growing a business, done right.

“It’s very hard to have a salon managed by someone with the same amount of love and care as an owner-operator.”

Asked to name the big trend in hairdressing, Cullinan does not hesitate.

“Colour is the big thing now,” he says.

“The celebrity demand and look now is also for hair extensions. At least 30 per cent of girls around town – the Instagram girls, the social media girls – are wearing extensions.

“But hairdressers have become so crafted in colour in recent years. Colour that’s very delicately-placed and finely-placed to suit people’s faces. To frame their faces properly, to beautify – to make eyes pop and features pop.

“So colour is where hairdressing has changed massively in the past five to 10 years. It’s become very sophisticated; very highbrow, very uptown.

“Maybe that has been because fashion has moved so quickly, along with styling and makeup. Hair’s just been right up there as well.

“The effect that (social media) influencers have at the moment is ginormous and I can’t see that changing any time soon.

“It used to be supermodels and actors dominating the (on-trend) looks, but now it’s the influencers. People have always danced in these spaces to dictate the new trends.”

As well as an eye on salon expansion, Cullinan is thrilled to be launching a new luxury hair care range, Wilde by Oscar.

“It’s my new baby and it was the natural next step for me,” he says.

“I want to make this the No.1 hair care range coming out of Australia.”

The Wilde by Oscar range is made from native Australian food plants including Kakadu plum and wattle seed as well as what Cullinan calls the ‘magic ingredient’ – hemp seed oil.

Which brings him to another new passion project.

With the hemp industry exploding worldwide – the health benefits of CBD oil now firmly acknowledged by the medical profession, governments and investment community – Cullinan has begun growing the crop on his farm near Byron Bay.

“I have some friends involved in a company called Hemp Fields Australia and they asked me if I’d like to come on board as a partner.

“My farm is nearly 100 acres and we’re growing the hemp down there. We grow, harvest and extract CBD oil and export it. We’re opening up export pathways in Europe, the UK and US.

“I’ve seen first-hand the effects of CBD oil on people with things like bad anxiety, people who can’t sleep, people with Lyme’s Disease … people with all sorts of illnesses. They call it the sacred plant.

“There are 160 or 170 strains of cannabis and the one that we’re dealing with is a non-psychoactive strain, so it doesn’t have any THC in it.

“It is a game-changer for many people with illnesses or conditions. It’s a proven game-changer. It’s not necessarily a silver bullet, but it’s changing people’s lives.”

When it comes time to de-stress from the demands of the tresses trade, you will often find Cullinan hammering a punching bag or sparring with fellow boxing enthusiasts at Fighters Haven, a Burleigh Heads gym which he co-owns.

“Along with the farm, it’s my happy place – except maybe when I’m getting worked over !! ” he says with a laugh.

I just go to the gym to spar with a beautiful bunch of people.

“I train there three to four days a week but I’d go more if I had the time.”

While he still occasionally gets ‘on the tools’, Cullinan says it’s mainly for family and friends or a discerning customer wanting a very special haircut.

“Can you believe I haven’t cut her hair yet? I’ve been wanting to do her hair for a while and do something really special,” he says.

“I want to do a kids’ product line, so she’s basically going to be a guinea pig for my product.”

As for the future, Cullinan has grand plans to have up to 25 salons within the next three to five years.

“I believe the time is right now,” he says.

“Everybody’s wanting to buy land and get out of the rat-race. It’s a reset time for many people.

“Having said that, I always want to keep the brand clean and pure. Keep it sharp and tight and very relevant.

“The great thing about Oscar Oscar is that many of my business partners are in their 20s and 30s. It’s still a very fresh brand.