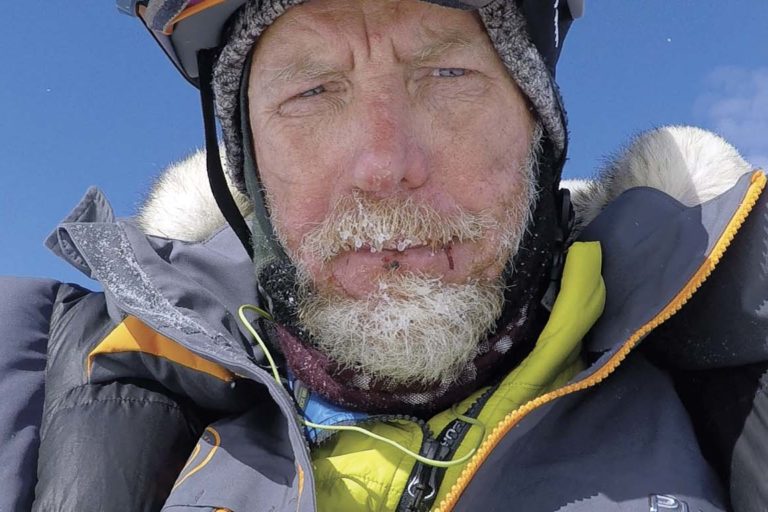 Welcome to the first Australian attempt to cross Greenland on skis from South to North. Polar adventurer and local Gold Coaster Geoff Wilson headed off an arduous journey of over 2,200 km – and ORM couldn’t wait to hear all about it… 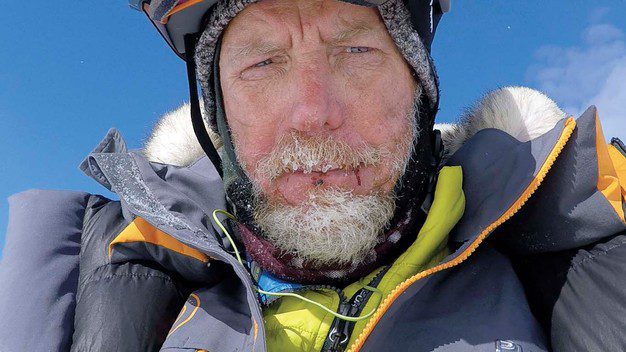 The cough had been consistent at least – tearing at my cold lungs continuously as we made our slow way northwards. Looking across the polar plateau all I could see was an interminable frozen wilderness seemingly stretching to the very ends of the earth. The temperature was well below -20 C and the air seemed as though it was full of steel staples with each inward breath. Cough, hack, cough, then alarmingly a taste of blood and visible blood on the snow. With a sense of alarm I covered the mess by kicking snow over it with my ski boot. Survival stress and an acute anxiousness coursed through my veins, concern that my travelling partner, son in law Simon Goodburn would have added strain, if he knew how sick I actually was. 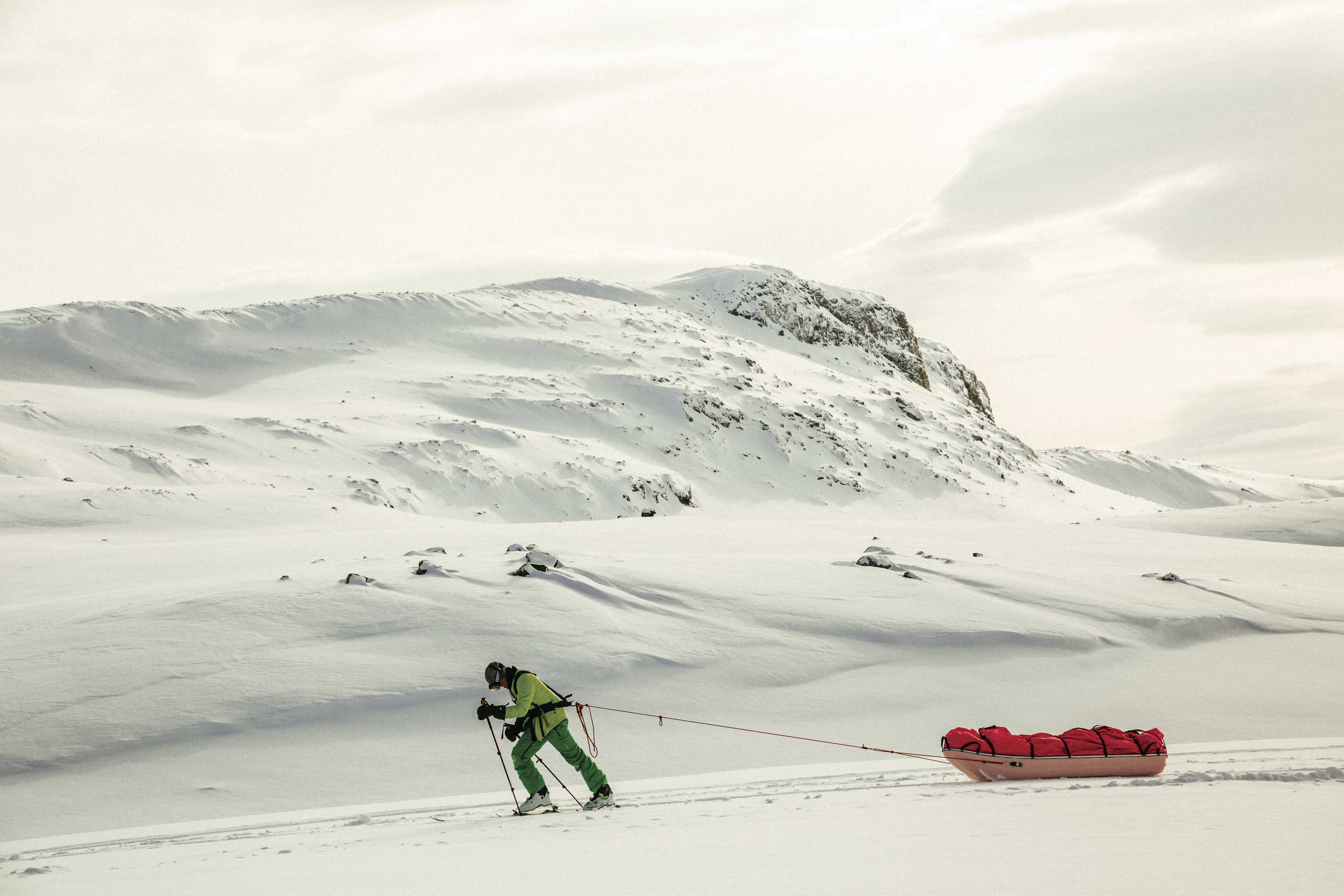 I was here to lead and guide the first Australian attempt to cross Greenland on skis from South to North. An arduous journey of over 2,200 km, a difficult traverse when well, but nigh on impossible if I deteriorated any further towards a serious pneumonia out here. This unforgiving landscape had proven itself our master, we had literally crawled across it for days now. Struggling to make ground, hauling our heavy sleds northwards for the last 7 days. Each kilometre seemed to inch slowly by, yielding so little but asking so much from our now already depleted bodies. 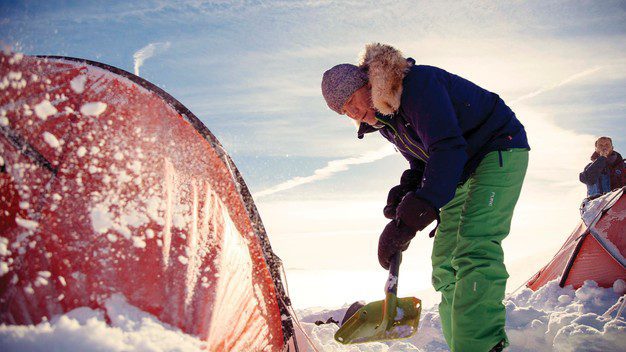 The hard ice, with very little covering snow was maximally punishing on joints and lower backs as we dragged our 150 kg pink sleds. The lack of wind, or wind lightly fanning into our faces meant the glory of being hauled mile after mile by kitepower was out of our grasp. When the wind had allowed we had flown kites hard upwind, jamming our legs for hour after hour to make the upwind angles. Like doing a squat for 6 hours straight, there was never any letup to let the lactic acid free from rigid, fatigued muscles. Then it warmed up, so warm that the ice surface turned to porridge, making travel difficult and tent life abysmal as everything was dripping and wet. None of these hardships we had imagined we’d encounter, none of them we had prepared for. 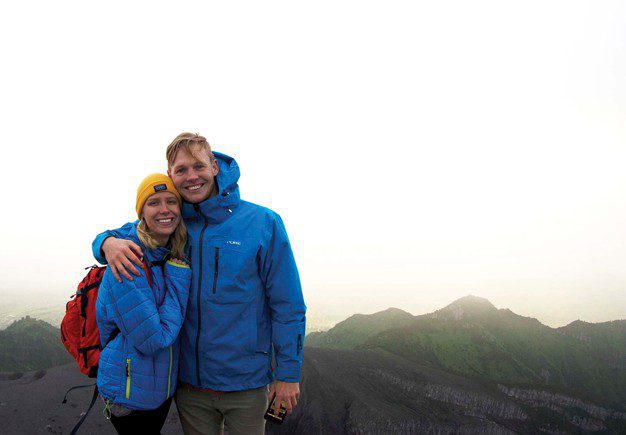 The history of Greenland is filled with great men conquering great challenges, we followed in the footsteps of one of our heroes, Freidthof Nansen, in fact the entire journey was named after him, “Nansen’s Cross”. Nansen crossed Greenland from east to west in 1888, leading a group of Norwegians safely across at the tender age of 27. His greatest quote… 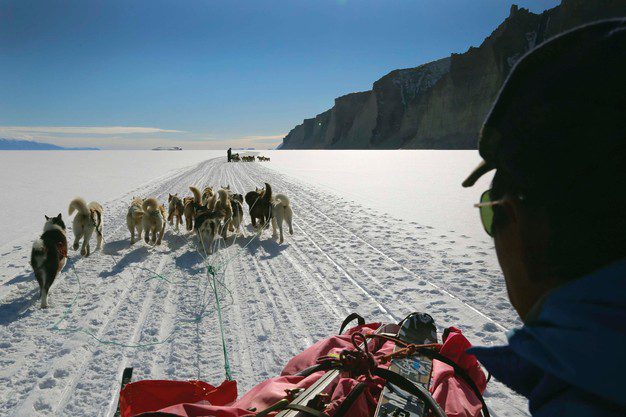 “Difficult takes some time, impossible a little longer…” Filled my head now, rolling around like a marble in a glass jar, banging against all parts of my psyche taunting me to quit, to curl up in a ball, to ignore the challenges we’d set, to live easy, to go home, to live to fight another day.

The history of Greenland is also filled with men buried in ice graves having been conquered themselves by the Pittaraks (viscous Greenlandic storms), crevasses, polar bears, glaciers and extreme cold that the savage home of the Inuit could deliver to an unwary explorer. I resolved to do our utmost to not join these men whose ends had I was sure started with poor outcomes like the ones we faced now. 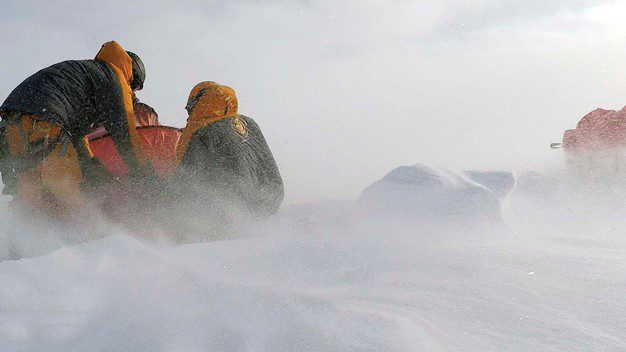 I took another cold breath and entered the tent; Simon was well on the way towards preparing our evening meal and melting ice to create water for the following day. I made a satellite phone call to my doctor mate Bruce back in Oz and explained my clinical signs and the severity of them. He recommended a particular antibiotic regime and strict rest, at least the first part of his advice I could follow. I resolved to continue on as long as my body would allow, how long that would be would depend on how quickly the medication kicked in. 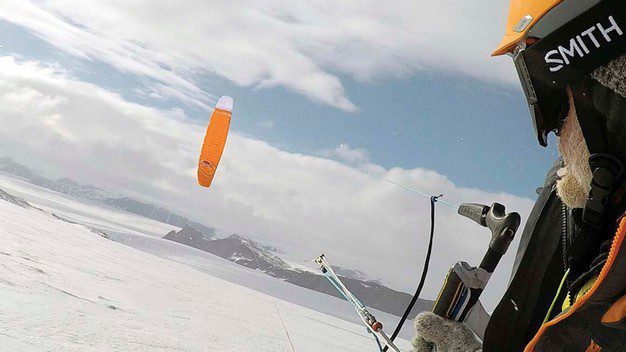 I woke the next day to my jarring alarm, feeling marginally better already I crawled outside to check for wind, with disappointment I discovered yet more light wind, below 3 knots but in the right direction at least. We ate breakfast and packed the tent and sleds. Getting the large light wind kites out we donned our ski boots and crunched though the snow running out the kite lines and mentally preparing for another difficult day ahead. Flying a kite in strong wind can get dangerous, but technically it is relatively easy when compared to the enormous technical skill required to make distance in wind under 3 knots. The kite is continuously trying to fall out of the sky, any loss of kite line tension results in a loss of momentum, it requires continuous concentration and the miles come painfully slowly. 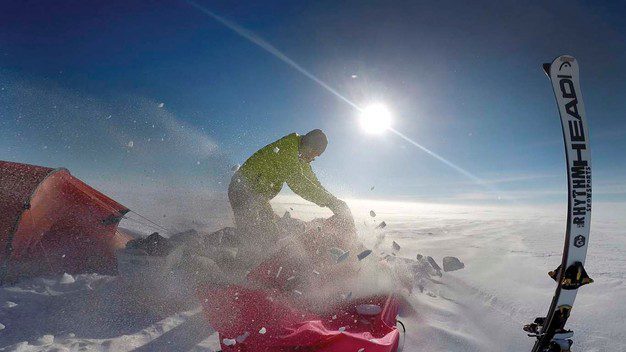 We set off, both kites airborne we made walking pace northwards at first but then after a few hours we struggled to make distance at all. The kites fell out of the sky signalling that wind assistance for the day was over. With heavy hearts we packed the kites away and I suddenly realised that with all of the challenges we had against us, our crossing was in serious jeopardy. Our daily mileage was so low we were on track for a 100-day crossing!

Our food would run out well before we reached northern Greenland and a ticket home. My chest had improved slightly overnight but was still a large question mark and the weather was against us. Things were looking pretty bleak and as I sat on my knees amongst the bright orange canvas I reviewed all my/our dreams in my head. 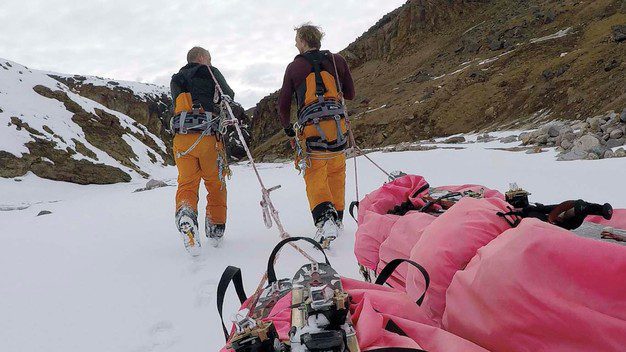 I realised how far we were from the image I had built in my head of the journey, my “faith eye” image as I call it. This image was so far removed from our current crisis that I began to rage inside. I then had what I call the “pound the ground” moment, in reality a tantrum. Like a child losing its temper due to unhappiness at a parent decided outcome, I smashed the snow with my fist. Upset at our plight and desperate for a change in fortune, I raged that the situation was so poor, our results so dismal. After three manic minutes, I calmed, dusted off the snow and walked to my sled. Simon had witnessed my outburst and I explained to him I wasn’t upset with him, us or our teamwork, just angry at our situation and the poor cards we had been dealt. I explained that I had had a massive attitude shift within that tantrum and felt things would now change. Simon look at me  little perplexed, unsure if this was the onset of madness or some mental trick he’d best learn to utilise for this and the many journeys ahead. 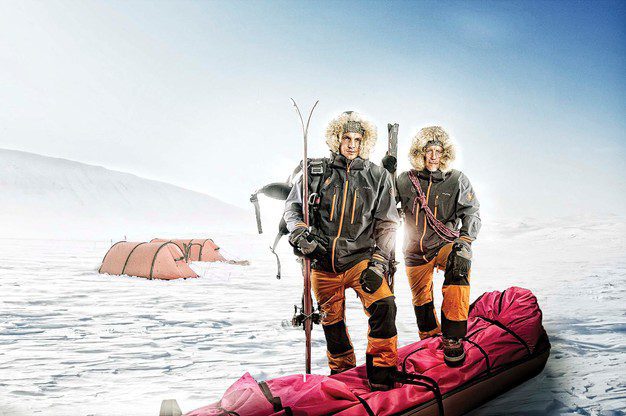 We setup camp early that day and I called home to explain how badly we were doing to Sarah. She listened intently then calmly explained that our attitude needed correcting. Initially offended, I went to sleep upset with my loyal, patient wife, then during the night rolled over in my sleeping bag and realised she was right, again. I needed to use the “pound the ground” moment to wrench our circumstance from defeat to victory. I needed to arrest the downward mental spiral and get back to the “steel trap” mental approach that had seen so many difficult journey’s before this one completed safely and in good time.

Day 8 – we awoke, dressed and with a renewed attitude started at first slowly and then quickly to make ground northwards under kite power. The new attitude had created new circumstance and that day we made 161 kilometres, a record for the journey so far, more than we’d covered in the entire prior week. Day after day my chest recovered, we worked better as a team and Simon showed incredible tenacity pushing through challenges despite an ongoing knee injury. During the following 7 days we covered 1240 kilometres, more than any duo ever in a Polar environment. 17 days and 9 and a half hours after leaving southern Greenland Simon and I stood overlooking the Artic Ocean. 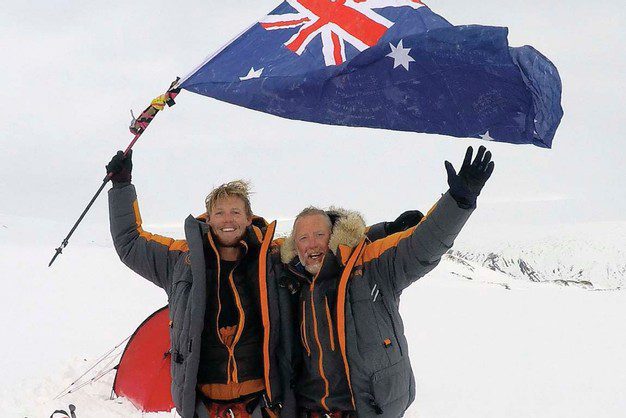 We had made it, the first Aussies to make the journey and the fastest men in history to cross Greenland south to north, 2160 kilometres in total.

The record sealed by a change of fate affected by a man tantrum so many miles to our south.

Sometimes in life we must rage against what life throws at us, determine not to accept the poor cards… demand a new hand be dealt and work damn hard to make sure that you make good with the new cards. The records we set were created a volatile mixture of a large portion of faith, a bucket of hard work and a pinch of good fortune in the end…

Two days after finishing the journey we were picked up by two Inuit hunters with two teams of huskies. We had waited on the edge of a frozen Artic ocean, unsure if our saviours would ever find us. A colder, harsher wilderness one can not imagine, yet these incredible men and women make it their home. The Inuit are a humble shy people quick to smile but who don’t openly show joy. They are tough because their homeland demands it.
They are family focused as they have learnt that family is all that matters in the end.
It was an experience I’ll never forget, seeing the first dogs come over the frozen ocean to our rescue.

Hours later we re entered civilisation as the dogs hauled us into the tiny settlement of Qaanaq, the most northern town on our planet, two Aussies with bright pink sleds and wide grins to match as we thought of coming home.