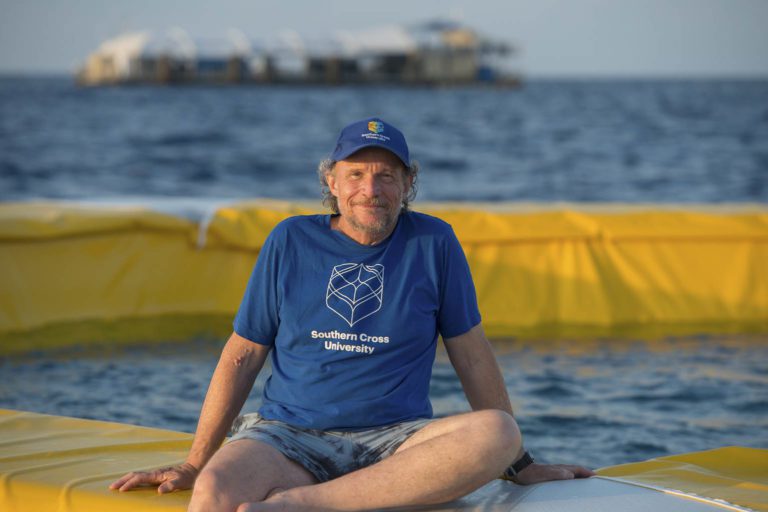 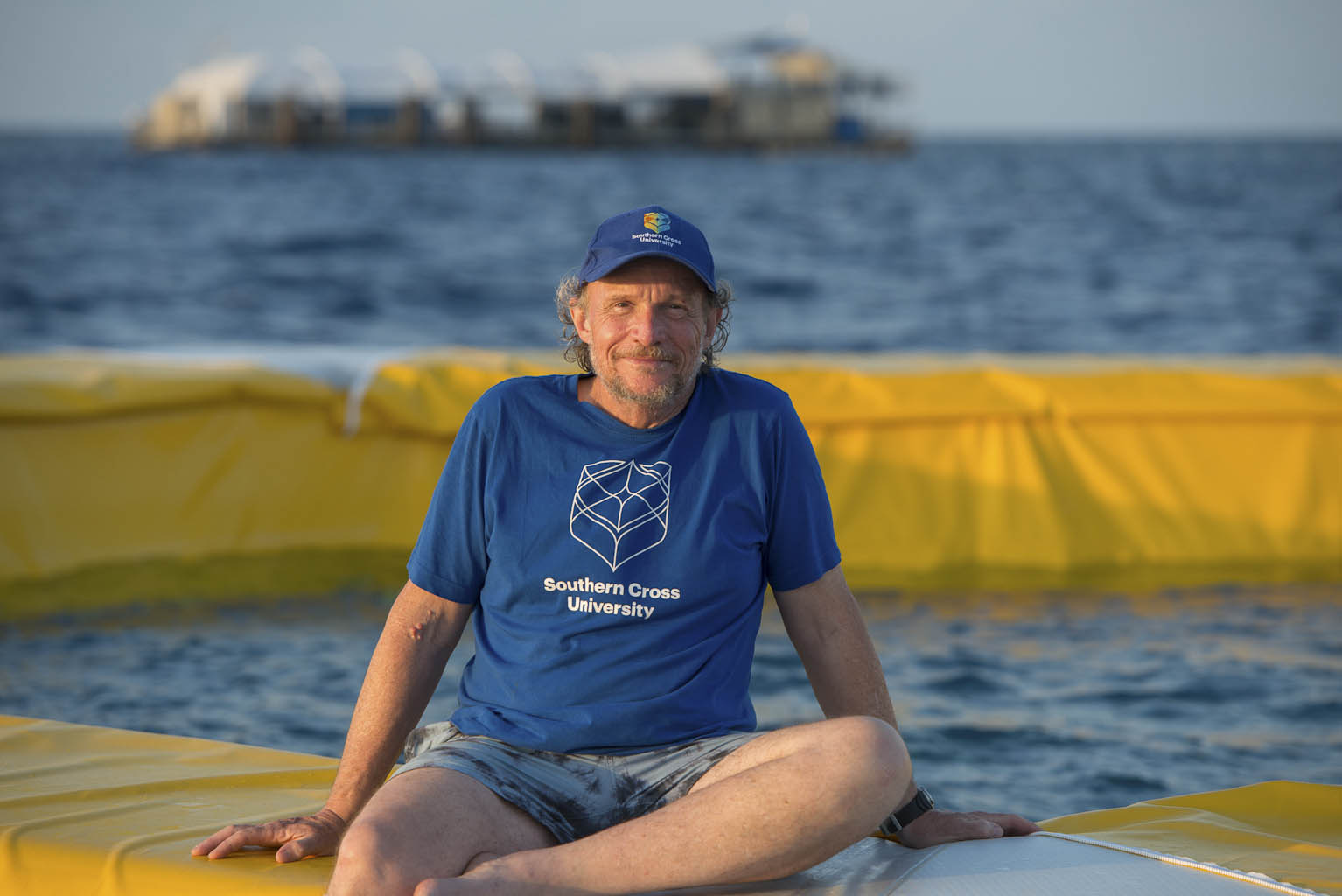 Professor Harrison said the Larval Restoration Team had worked tirelessly at Reef Magic’s Marine World pontoon off Cairns since the mass spawning ‘underwater snowstorm’ began the night of November 17, following the November full moon. He says the team’s nocturnal project is paying off, now with millions of healthy coral larvae swimming around in six floating rearer pools ready to be dispersed and grow into new coral communities.

For the first time the team is trialling the newly designed ‘coral-nursery’ rearer pools, turbo-charging the baby coral’s chance of survival through co-culturing with algae, and tracking their progress using new ultra-sensitive optical sensors in real-time.

“We are using my newly-designed spawn catchers and nursery pool nets which have enabled us to catch more of the coral spawn slick and rear millions more larvae than ever before – and the results are looking very promising,” said Professor Harrison, who first discovered the mass coral spawning phenomenon with colleagues on the Great Barrier Reef 38 years ago.

This time, one of the ground-breaking advances from the team including Southern Cross Uni PhD researcher Nadine Boulotte is co-culturing the coral larvae with their algal partners (microscopic zooxanthellae) to turbo-charge their chance of survival, before being transplanted back onto the Great Barrier Reef.

“This innovative technique is like giving the baby corals a ‘battery pack’ by allowing the coral larvae to take up symbiotic algae, giving them the potential to acquire more energy, and therefore grow faster and survive better. If we succeed in increasing their survival rate it can make a big difference in being able to scale up future restoration processes,” Professor Harrison said. 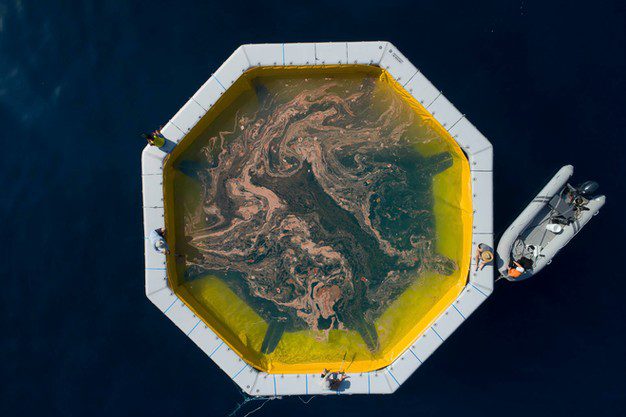 Researcher Nadine Boulotte said “I’m excited to see the results from my laboratory experiments being trialled on the reef for the first time.”

JCU Senior Researcher Officer Katie Chartrand has been carefully growing the algal cultures in the lead up to the project and says the coral larvae are able to acquire symbiotic microalgae much earlier than they would in the wild.

“We have grown more than 10 billion cells of a more thermally-tolerant species of algae for our developing larvae to take up rather than the baby coral securing this symbiont well after settling. The next step will be to monitor how these energy-boosted larvae survive and grow in order to test if this technique improves coral recovery out on the reef,” Ms Chartrand said.

“Another critical component for our project to succeed is the partnerships with reef tour operators Aroona Boat Charters and Reef Magic, who have been providing key support for the research on Moore Reef.”

UTS Associate Professor David Suggett performed the initial algal culture process, and in another exciting first for the project team, was able to track the uptake of these algae symbionts by the coral larvae in near real time using new optical sensors.

“This is a world first – our new sensors are so sensitive they are able track uptake and photosynthetic activity as the algae initiate symbiosis with the larvae. These algae give the larvae a metabolic boost that normally they would not receive until metamorphosing on the reef into baby corals,” Associate Professor Suggett said.

Andy Ridley, CEO of conservation organisation Citizens of the Great Barrier Reef, said partnering with experienced Cairns tourism operators including Aroona Boat Charters and Reef Magic, was not only crucial to the project’s success, but a drawcard for reef tourists who see the project first-hand.

This project is a collaboration between the University researchers and key industry partners including Aroona Boat Charters and Reef Magic, and is funded by the Queensland and Australian Governments Coral Abundance Challenge. 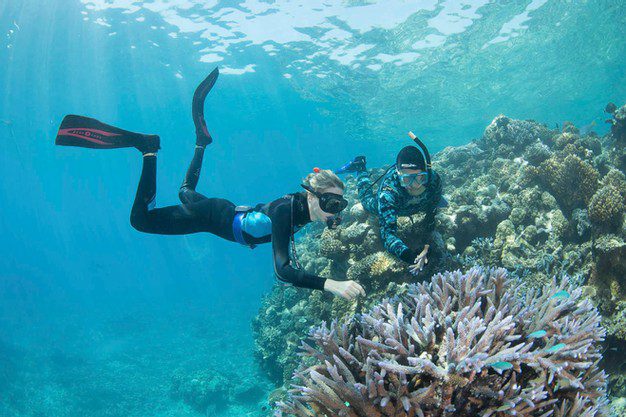 The ‘conception’ of Coral IVF

It was when Professor Peter Harrison and colleagues first discovered mass coral spawning on the Great Barrier Reef 38 years ago that he first conceived the idea of using ‘Coral IVF’ to re-establish healthy breeding coral communities on damaged reefs devastated by coral bleaching.

The award-winning discovery of mass coral spawning radically changed scientific views about how corals on the Great Barrier Reef and around the world reproduce. The settling of coral larvae onto the reef is essential for restoring the next generation of coral communities.

Professor Harrison has been successfully trialling his unique restoration process at ever-increasing scales in the Philippines and on the Great Barrier Reef for the past seven years. He and his team capture spawn from corals that have survived bleaching devastation and keep them in ‘nursery enclosures’ so they don’t float away before they are capable of settling on the reef. The team then continues to monitor the reefs during subsequent months to track how well the coral babies survive and grow into new colonies that can become sexually mature and begin reproducing within three years.

While Professor Harrison’s Coral IVF process is a blueprint that could be scaled globally to help restore damaged and dying reefs, the team cautions that restoration alone cannot save these beautiful complex ecosystems that require urgent action on climate change to ensure their survival.