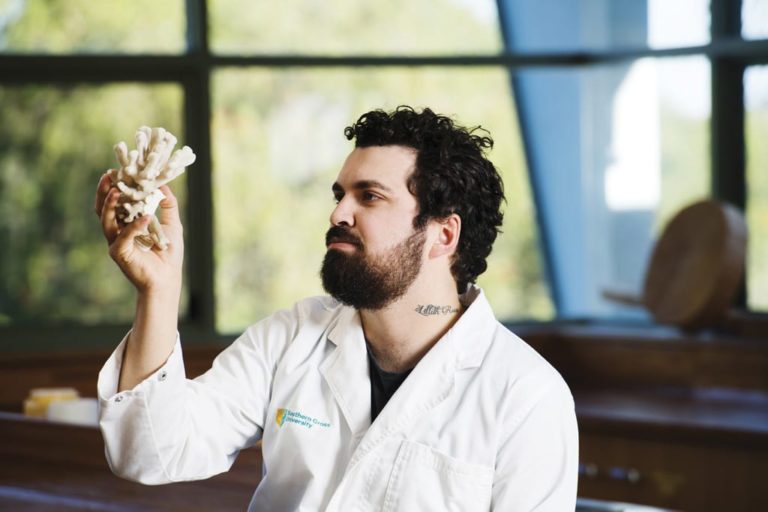 Jordan Ivey, a proud Indigenous man with South Sea Island heritage, is studying his Bachelor of Marine Science and Management at Southern Cross University. This November, he will assist the research team during nature’s most exquisite natural phenomenon, the annual Mass Coral Spawning event on the Great Barrier Reef. But Jordan’s pathway into working beneath the ocean’s surface has been unique, as ORM found out… 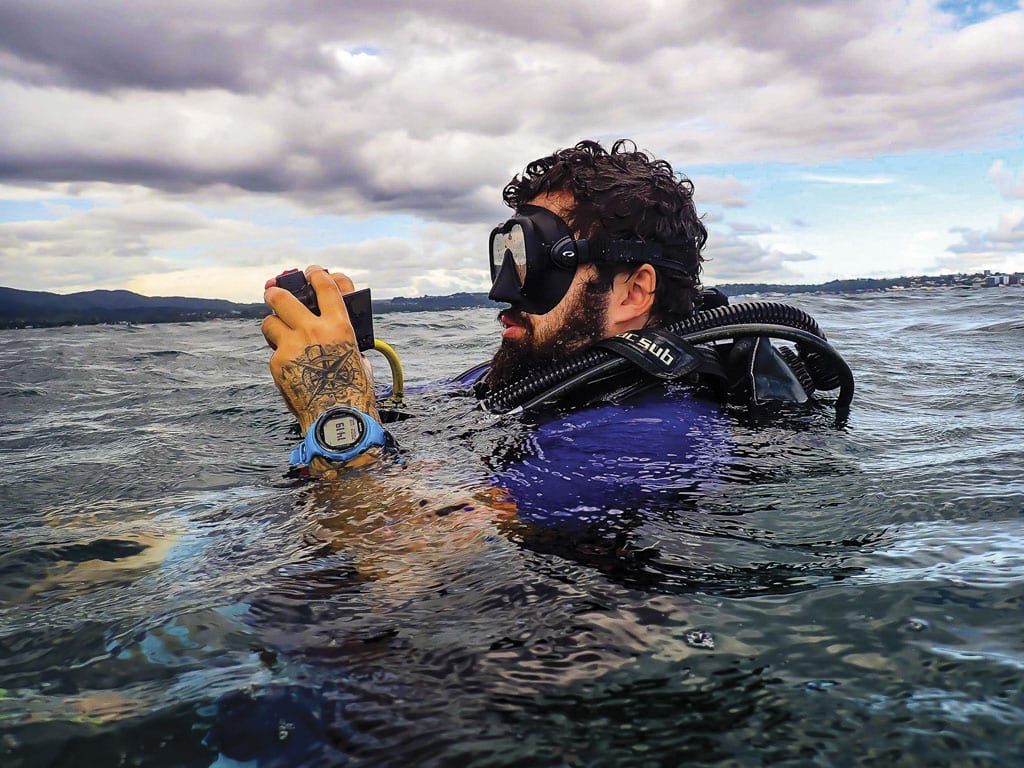 Whenever Jordan Ivey fits his scuba mask and jumps into the ocean, it’s as though the saltwater is welcoming him home.

He remembers the first time he truly experienced the magic of the sea like it was yesterday. He was in Vanuatu, body surfing and there were colourful fish swimming around him. In that moment in the ocean, everything made sense. He felt safe. Alive. Hopeful. On that day, his deep love for the ocean and its marine life was born.

Last year he was awarded the prestigious New Colombo Plan Scholarship to spend a year in Fiji and the Philippines to expand his marine science knowledge and work closely with coral and fish researchers.

But Jordan’s pathway into working beneath the ocean’s surface has not been a typical one.

Less than a decade ago during high school, Jordan was told his grades wouldn’t be strong enough to pursue a career in marine research. 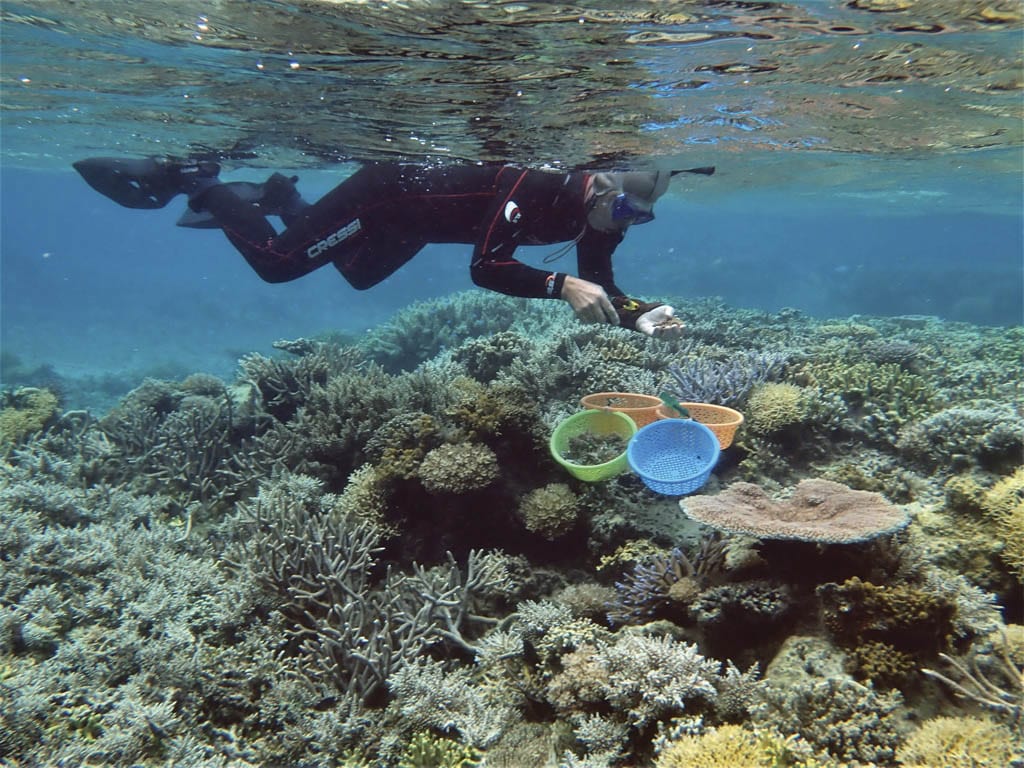 “After many discussions with my career adviser in high school, I was told I was not smart enough to pursue my dream as a realistic career. This realisation hit me hard, and I started focussing on sport and spending time at the beach.

I almost failed school for not showing up to class enough and ended up with very low year 12 grades,” he said.

“I entered the workforce and bounced around a few different jobs, sometimes working two jobs to pay for living out of home.

“The year after high school, my beautiful daughter Lillith arrived, which made me reassess my life. I wanted a career and did not want my daughter to grow up seeing her father as being unsuccessful.

I ended up securing a mechanic apprenticeship and was happy about finally having a career, even if my passion for cars didn’t quite match my colleagues’.

“I eventually went for my open water scuba diving ticket for my 21st birthday, which reinvigorated my passion for marine life.

I saved up to visit the Great Barrier Reef and spent time with a dive boat eco-tourism guide learning everything I could about the reef and the crisis that was happening underneath our flippers, with the degradation of coral reefs around the world.

It reinforced my passion to help protect the marine environment.”

However, Jordan hadn’t yet completed his apprenticeship and didn’t want to waste his hard work.

“I persisted and ended up finishing my apprenticeship early, with the Certificate III enabling me to enrol straight into my desired degree of Marine Science and Management. But I still held doubts from high school about completing University. I heard through multiple people about an award-winning pathway called the Preparing for Success Program (PSP) offered at Southern Cross, that prepares people for University and how to write academically.

I decided to study the program over the summer before starting my degree, which taught me many valuable skills. I was stoked to get three distinctions and one high distinction, which made me believe I was not only capable of doing University but completing it at a high standard.” 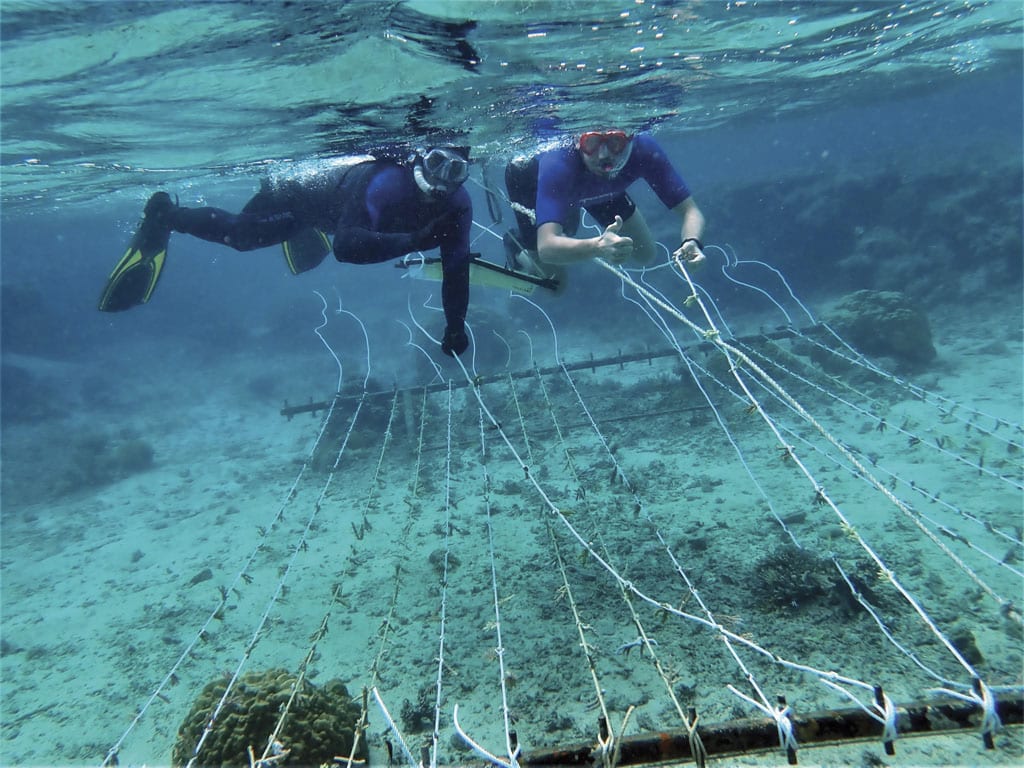 After graduating from PSP, Jordan enrolled in the Bachelor of Marine Science and Management, setting the goal to apply himself. To his surprise, he received four distinctions in his first semester.

“I was stunned. These high grades meant I could finally start dreaming again about a career as a researcher to help save reef systems around the world. I then received my first high distinction, which gave me even more motivation to use my success to motivate other people to study the PSP program, even if they hadn’t been able to finish high school.”

Jordan received his first Scholarship through Southern Cross, which helped cover his living and family expenses.

At the same time, he continued to focus on study and research and giving back to the University community.

“I was involved in the Indigenous community where I spoke with future Indigenous students and their parents about study options and then became a new student mentor for the University’s Equity and Diversity Office, and a student ambassador to reach out to people in the community to motivate them to pursue their study passions.” 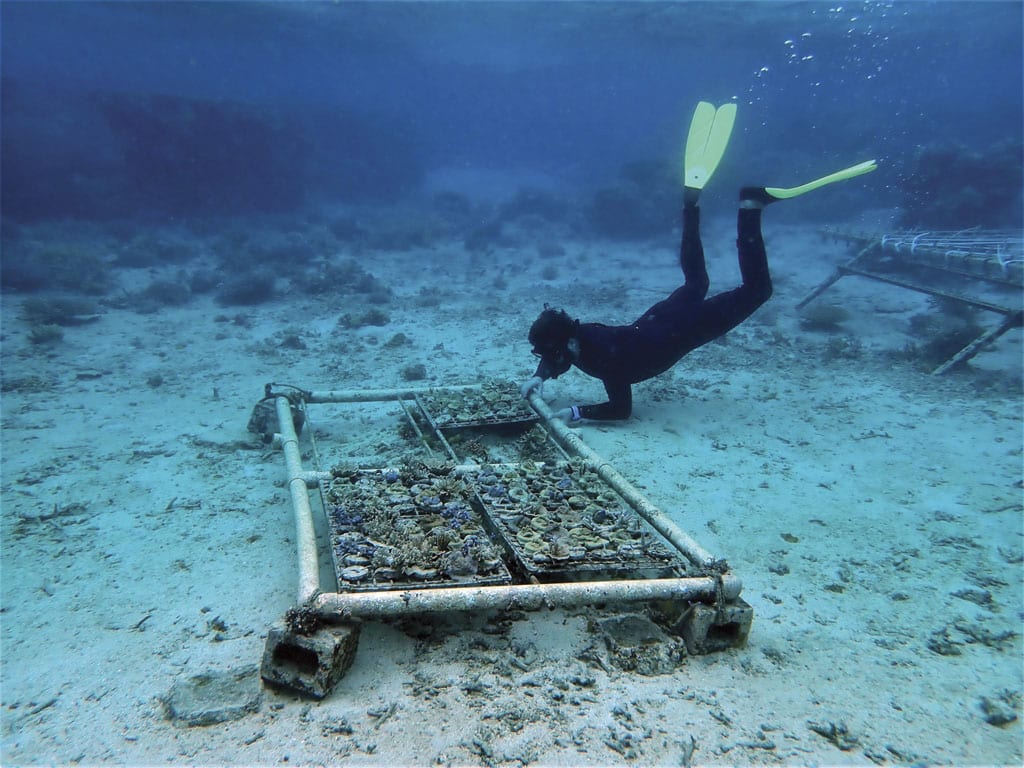 Jordan put his hand up for many volunteer opportunities, including Australian Seabird Rescue, rehabilitating sea turtles and bush regeneration.

He was named the co-recipient of Southern Cross University’s 2018 Sportsperson of the Year award for his significant leadership role at UniSport Indigenous Nationals and other UniSport events.

Around this time, Jordan began delving more into his Pacific Islander heritage. He wanted to see if there were any opportunities to assist South Sea Islander University students who belonged to families who had been taken from the Pacific Islands through ‘blackbirding’ to Australia in the late-1800s to work primarily in the sugar cane industry.

While some blackbird families stayed in Australia, others were deported in the early 20th century after the White Australia policy was introduced.

“Unfortunately, there was not much I could find, which also reflected how little I knew about that side of my culture,” he said.

“So, I went to the student services office to ask if there were any opportunities to study in the Pacific, to further my marine knowledge while having the opportunity to learn more about my culture. The International office insisted I should apply for the New Colombo Plan.”

After a rigorous two-week application process, Jordan was accepted for a prestigious Australian Government New Colombo Plan Scholarship which aims to increase knowledge of the Indo Pacific in Australia by supporting undergraduates to study and undertake internships in the region. 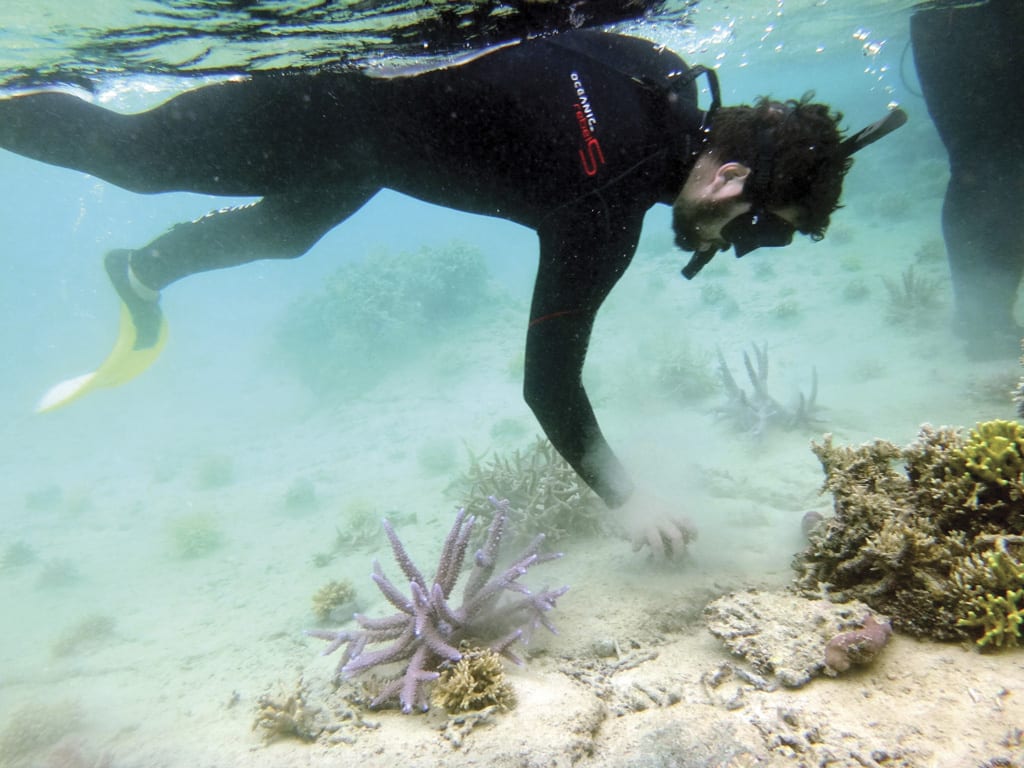 “I started designing a research program based on my passions to help protect declining coral reef ecosystems and to educate indigenous south sea islanders around protecting reefs. I moved to Fiji in January 2019 to start learning Fijian and transition to a year of study at the University of the South Pacific.

“When I arrived in the Fijian capital Suva it was definitely a culture shock – I expected it would be a lot more laidback. But a lot of Fijians are very welcoming, and before long, I was being invited to play sport and invited back to their villages for family dinners.”

Jordan took on an internship working in coral restoration and its impact on fish populations and witnessed the incredible Fijian coral spawning event in November.

He worked with the Institute for Marine Research (IMR) in the Philippines in early 2020 and plans to return there for further research when travel restrictions ease.

Jordan hopes his final undergraduate grade will result in his first journal publication. The paper’s working title is The Impacts of a Coral Restoration Program in Fiji on the Composition of Assemblages of Small Reef Fishes.

He plans to study his honours in 2021 and pursue his PhD through Southern Cross. His goal is to start implementing his own research and to keep inspiring other Indigenous kids to pursue their passion.

“For me, the future is clear. No matter where you live on our planet, we’re all connected to the sea. We need many things to make a better world, but nothing else will matter if we fail to protect our ocean – it drives our climate, provides our oxygen and shapes our earth’s chemistry. 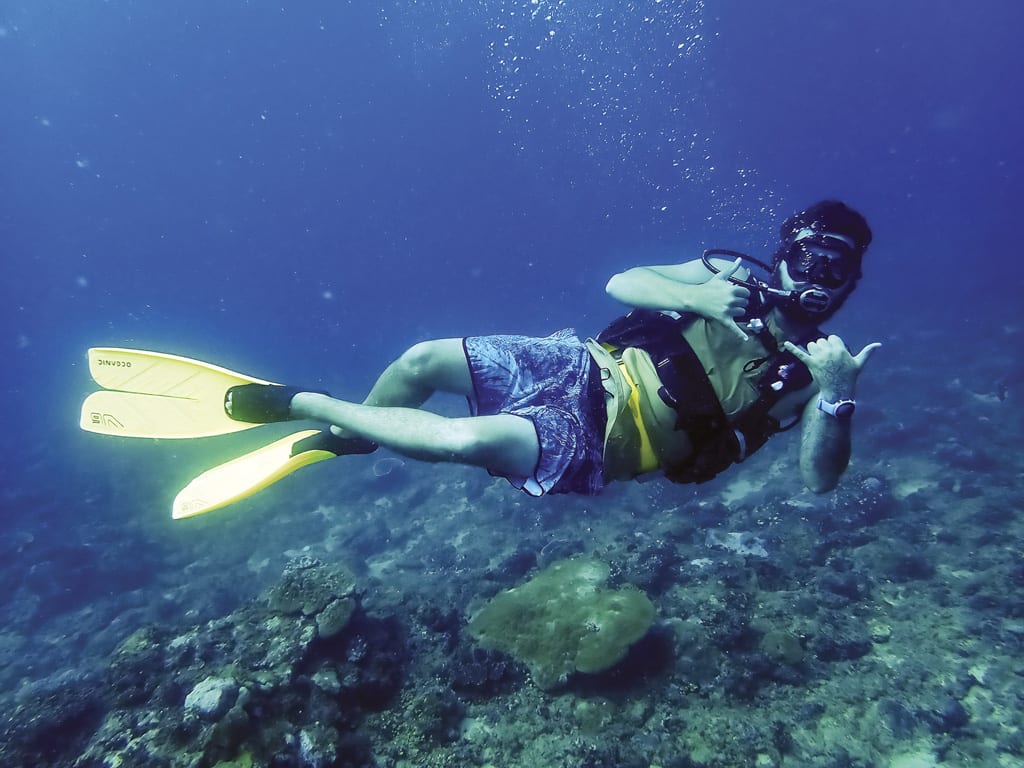 “My daughter is eight now, and she loves the water too and sometimes talks about studying marine science like her dad. These scholarships have impacted my life in profound ways, giving me access to an education I genuinely love and care about, and meeting so many phenomenal people.”

Jordan said he is often asked about what it’s like studying at a regional University like Southern Cross with its campuses at Gold Coast, Lismore and Coffs Harbour, away from a metropolitan city hub.

“I tell everybody how awesome it is at Southern Cross, being able to have more one-on-one time with lecturers and the chance to apply for opportunities without being swamped out by hundreds or thousands of other people. If it were a big University, I would have been lost in the cracks.

“Students at other universities often don’t have access to world-leading researchers until they are in their postgraduate research stage.

I’ve already had opportunities to connect with Southern Cross University marine researchers who are global leaders in their field who have been guiding me through, such as Professor Peter Harrison, who co-discovered mass coral spawning and is pioneering ‘Coral IVF’ larval rearing techniques to restore coral communities; and marine ecologist Associate Professor Daniel Bucher who specialises in reef communities, fish and sharks.”

Jordan said he is excited at the prospect of joining Professor Harrison for the mass coral spawning event this summer on the Great Barrier Reef, where the research team captures millions of coral eggs and sperm, grows the coral larvae in enclosures and releases them back onto dead and damaged corals. The team is always looking at ways to improve the method that is a blueprint for saving coral reefs around the world.

“Southern Cross is not only a leader in coral restoration techniques but has joined the Reef Restoration and Adaptation (RRAP) Program to help preserve and restore the Great Barrier Reef, and has brought on other incredible researchers to investigate ways to shade and cool large areas of reef to protect corals from bleaching. It’s a holistic, multi-disciplinary effort that will help create lasting change.

“I think the future is about the regions and the incredible people from regional Australia who are rising to tackle the world’s challenges and create meaningful impact.”