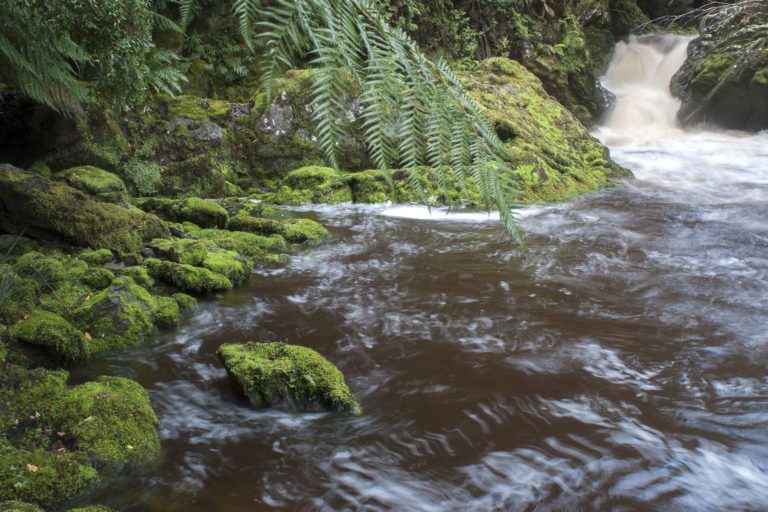 Western Tasmania is a fascinating place – it’s wild and rugged, feels 20 years behind much of mainland Australia … and its landscape is littered with crumbling testaments to a bygone era: ghost towns. Here are four such places that lie scattered amongst the region’s forests and hills, harbouring forgotten stories beneath rusted iron and splintered rubble. 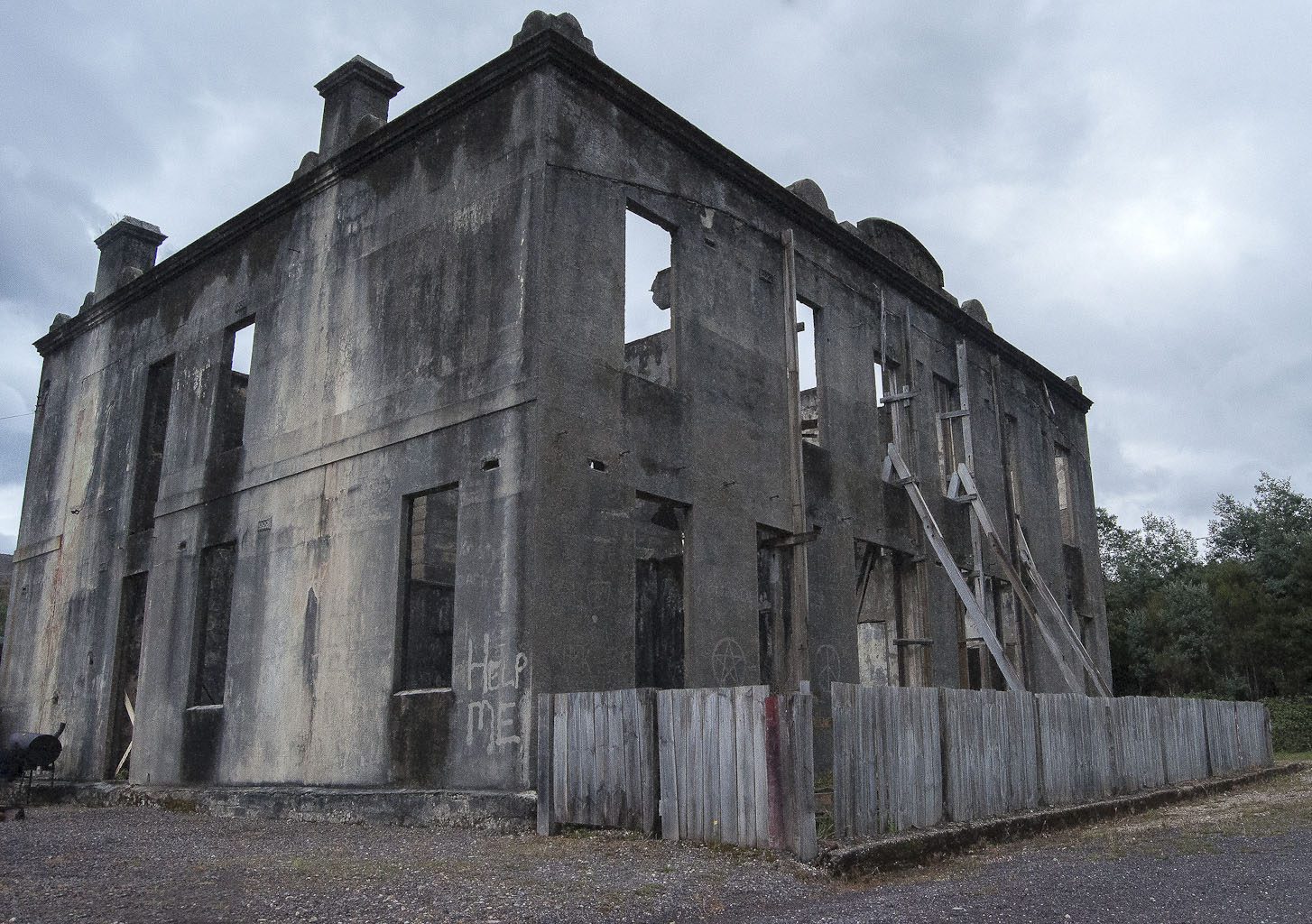 Roughly a kilometre walk from the town of Gormanston lies the ghost town of Linda and its only surviving edifice, the Royal Hotel, which was abandoned during the 1950s. This once-thriving town, which is located in the Linda Valley in Tasmania’s West Coast Range, served to support the North Mount Lyell mine. Once the mine was taken over by the Mount Lyell Mining and Railway Company in 1903, its residents began shifting uphill to Gormanston. 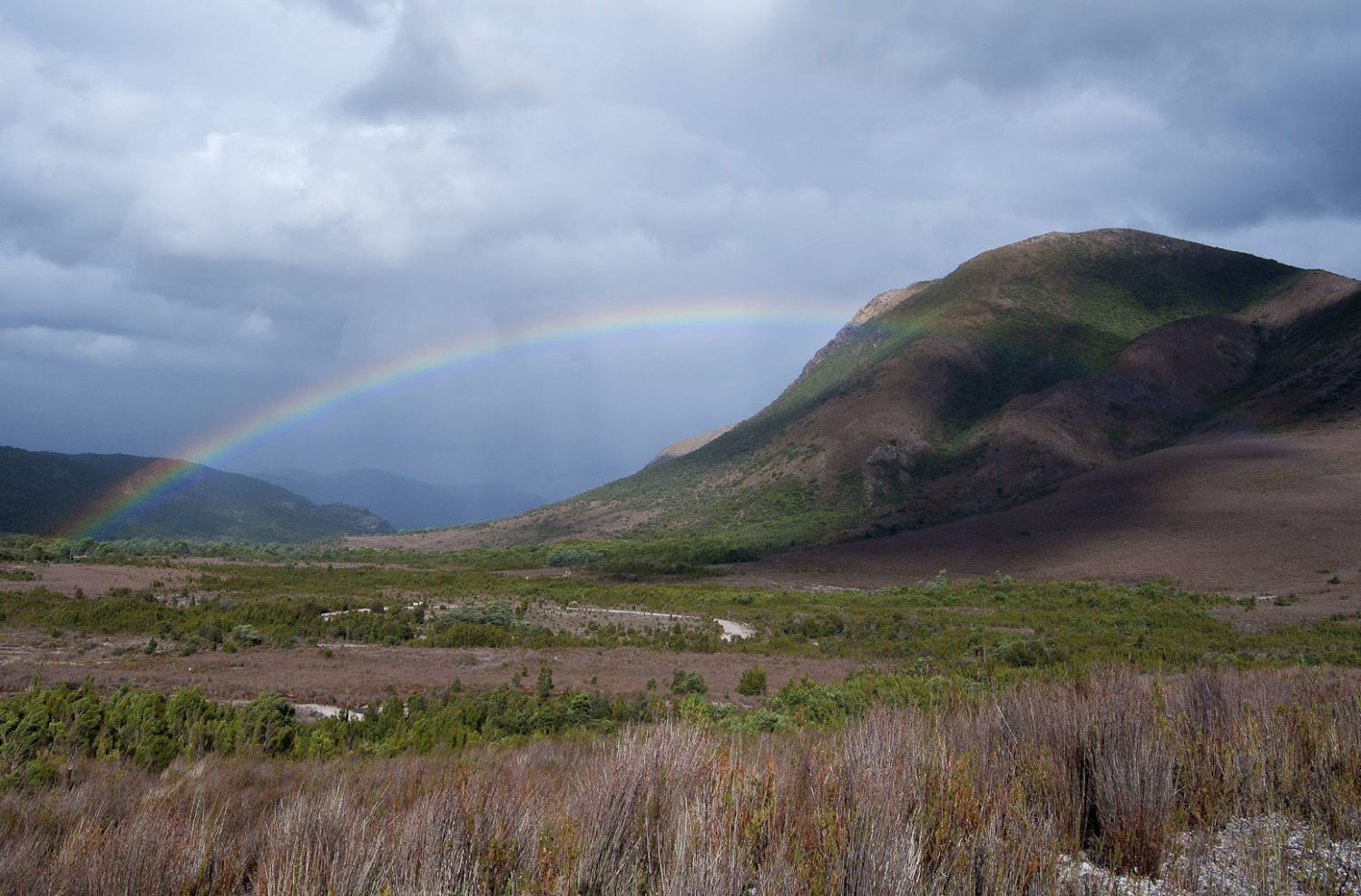 The town was also used to transport ore from the Mount Lyell mine to Crotty, which is now submerged beneath Lake Burbury, while metal was transported to Pillinger (which we’ll discuss shortly). Walking downhill from Gormanston, our party descended upon the Royal Hotel. Here photographer Dee Kramer flew his drone amongst the ruins, which I’m sure inflamed the curiosity of the town’s sole resident, who watched warily from the cafe next door. 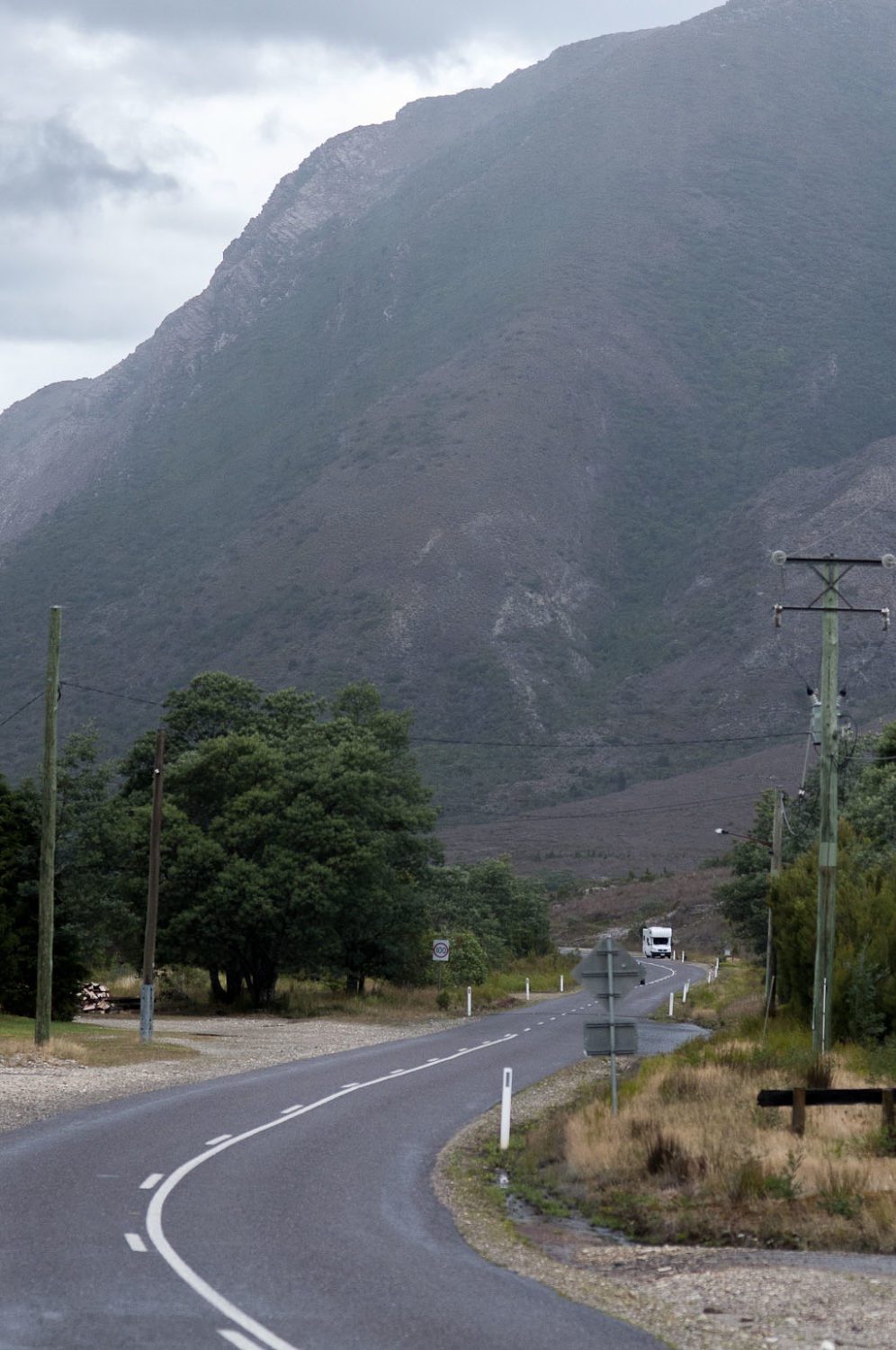 Apart from the hotel, whose scarred, grey pillars have been given an ‘atmospheric boost’ with pentagrams and phrases such as “help me”, there’s not a whole lot to see in Linda anymore. However, the surrounding countryside contains plenty of character. If you look hard enough, you might even find the forsaken cemetery on the slopes of a nearby hill.

Pillinger – a tale of two townships 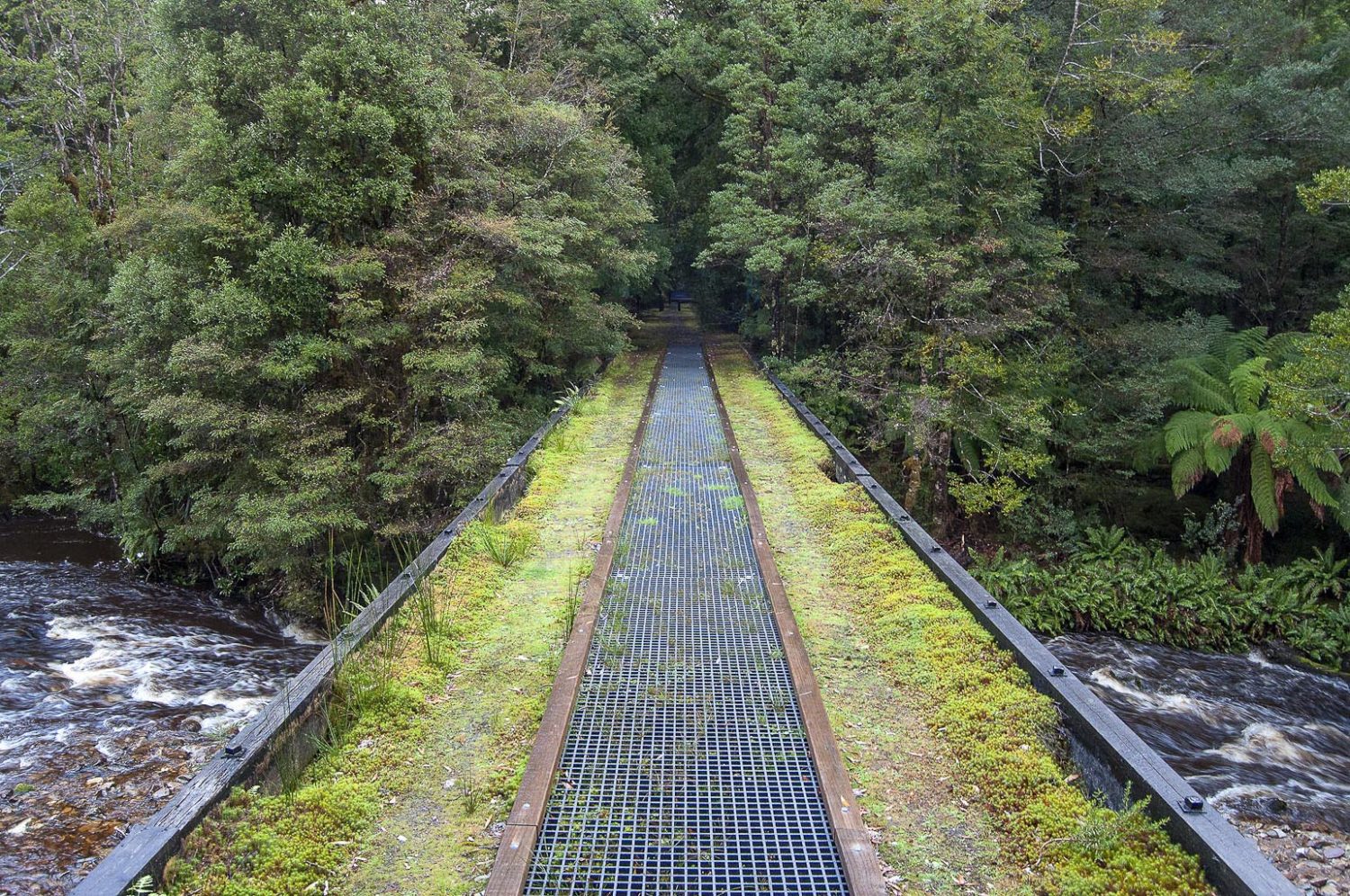 Pillinger is an adventure to get to. Accessible via a two-hour walk from the car park, this ghost town rests on the edge of the Franklin-Gordon Wild Rivers National Park, in the Kelly Basin. Skirting the chocolate-coloured Bird River, the 11-kilometre return walk to Pillinger meanders through lush rainforest, over slippery bridges, through tunnels of trees, past varied wildlife and tumbling cascades. Our walk to this historic site was as wet as it was beautiful. Bring some good wet weather gear.

The walk follows an old train line, built between 1898 and 1900, which is visible in parts along the forest. The once-thriving community of Pillinger comprised both East and West Pillinger and was home to 1000 people at its peak. East Pillinger contained two boilers which powered several brick kilns and a sawmill. In West Pillinger, on the edge of Kelly Basin, a 240-metre wharf helped transport bricks and timber on to boats. 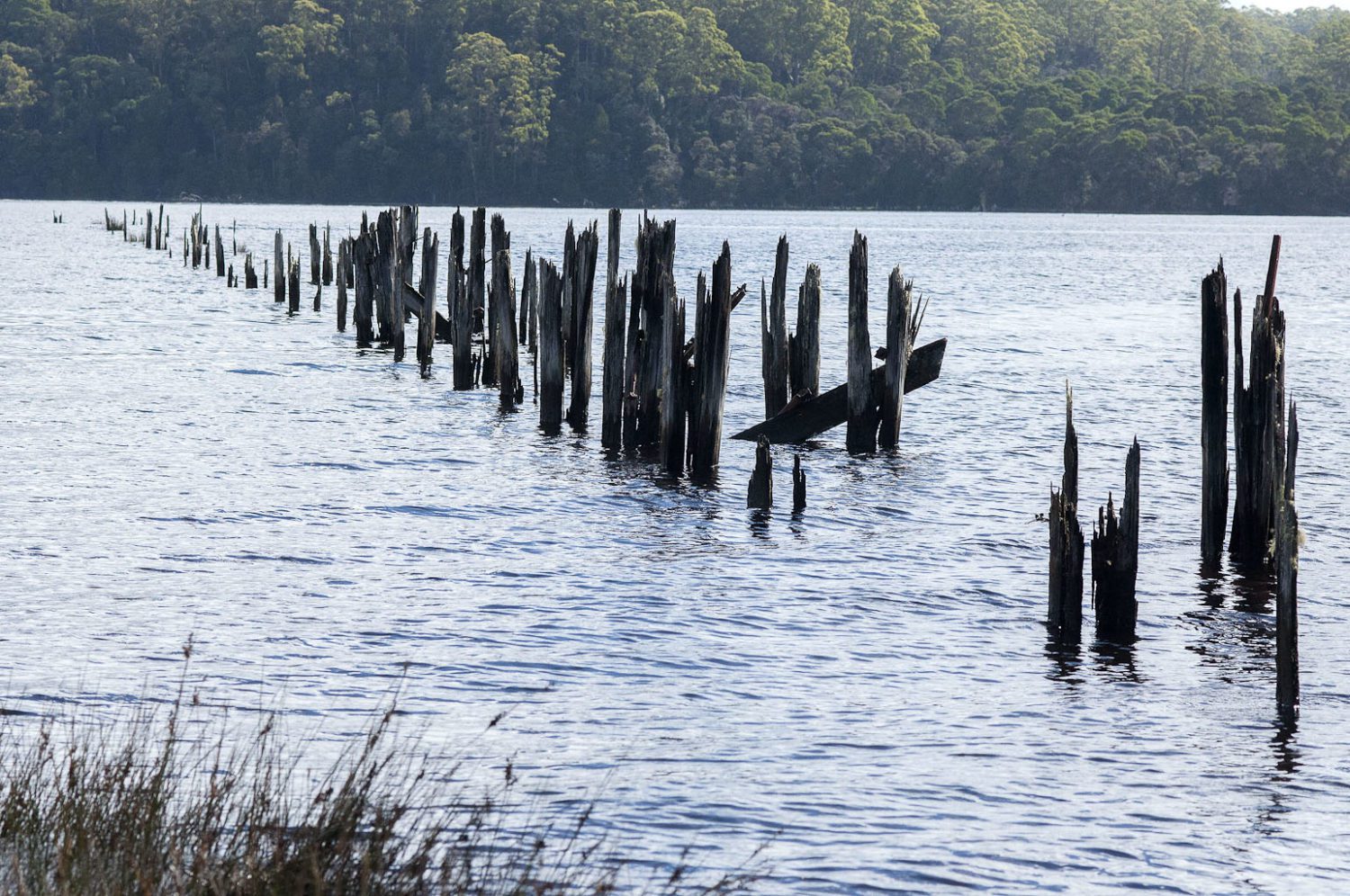 Located several hundred metres from East Pillinger, West Pillinger was a government town comprising stores, a community mess hall (much like a modern day café), a hotel and a police station. The place held regular sporting events and parties, suggesting it was once a thriving community. The nearby town of Strahan, however, was eventually favoured due to mining politics and the last of Pillinger’s residents left in 1943.

Arriving at Kelly Basin absolutely saturated (it had been steadily raining the whole way), we managed to dry out a little on an adjacent wharf before wandering amongst the brick rubble, past the remains of a bakery, tools, a train carriage and over to the remarkably intact boilers at East Pillinger. The lush, iridescent forest lends the ruins a wild, adventurous air, making it a little difficult to imagine that a settlement once clanged, banged and whistled with life in this all but forgotten part of the world.

Dundas – the party’s over 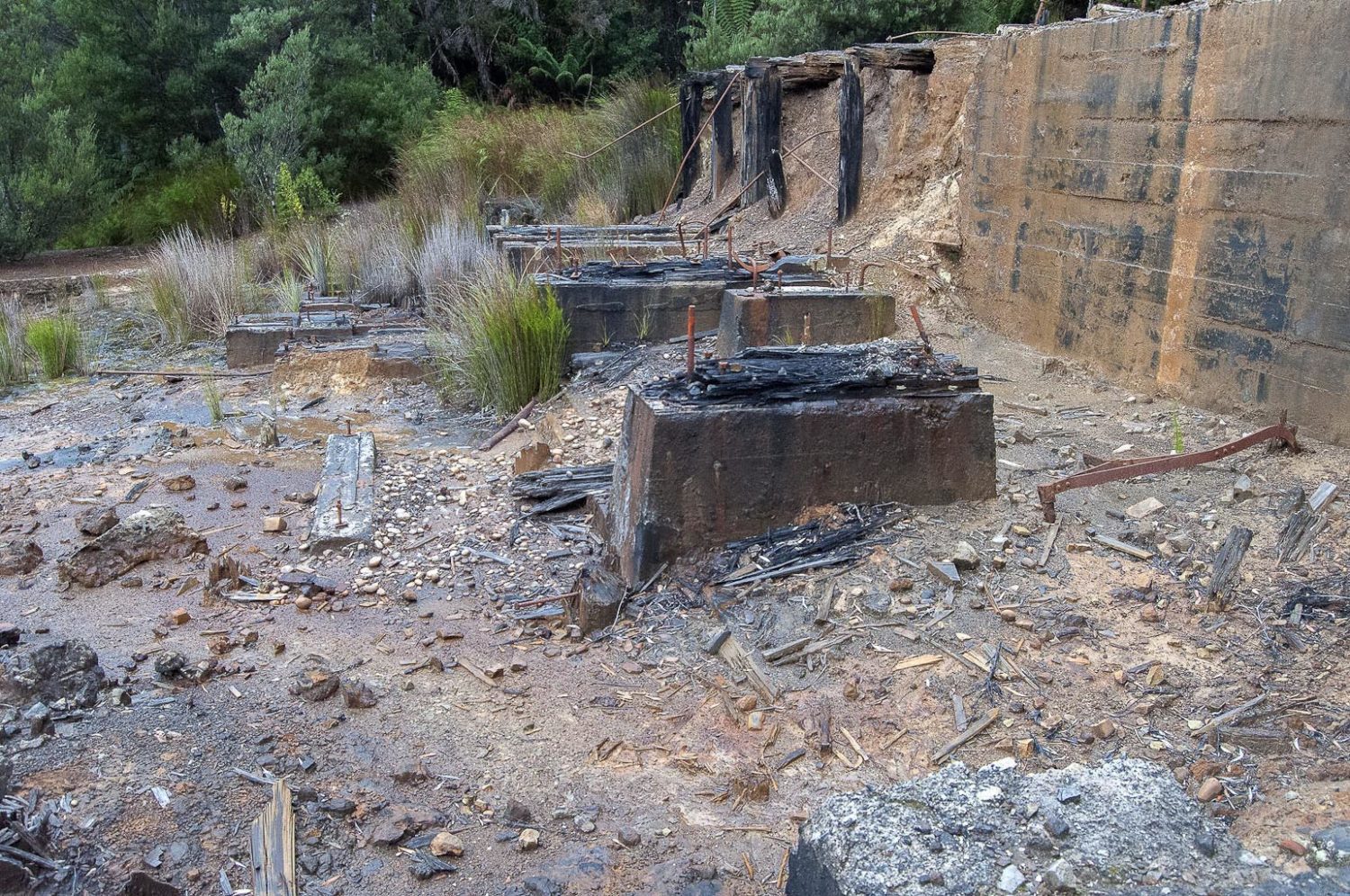 About five minutes drive from the town of Zeehan – where Houdini tightrope-walked across the main street – lies Dundas, another mining town gone bust. Dundas is located in a fairly obscure part of the country, and it was with a bit of luck that we found the sign into the old ghost town, which led us down a labyrinth of dirt roads, some of which branched off into goodness-knows-where.

Pressed for time and taking a couple of wrong turns, we arrived at more of a ruin than a ghost town. At one time, however, Dundas contained a post office which operated from 1890 to 1930 and its own newspaper, entitled the Zeehan and Dundas Herald (1902 – 1922). The Adelaide Mine near Dundas is purportedly home to rare minerals, with one particular specimen, Dundasite, being named after the town.

At Dundas, I slipped on some clay, nearly shattering my lens, fired off a couple of shots and left feeling liked I’d missed even the faintest whiff of the party by about 100 years.

Williamsford – blink and you’ll miss it 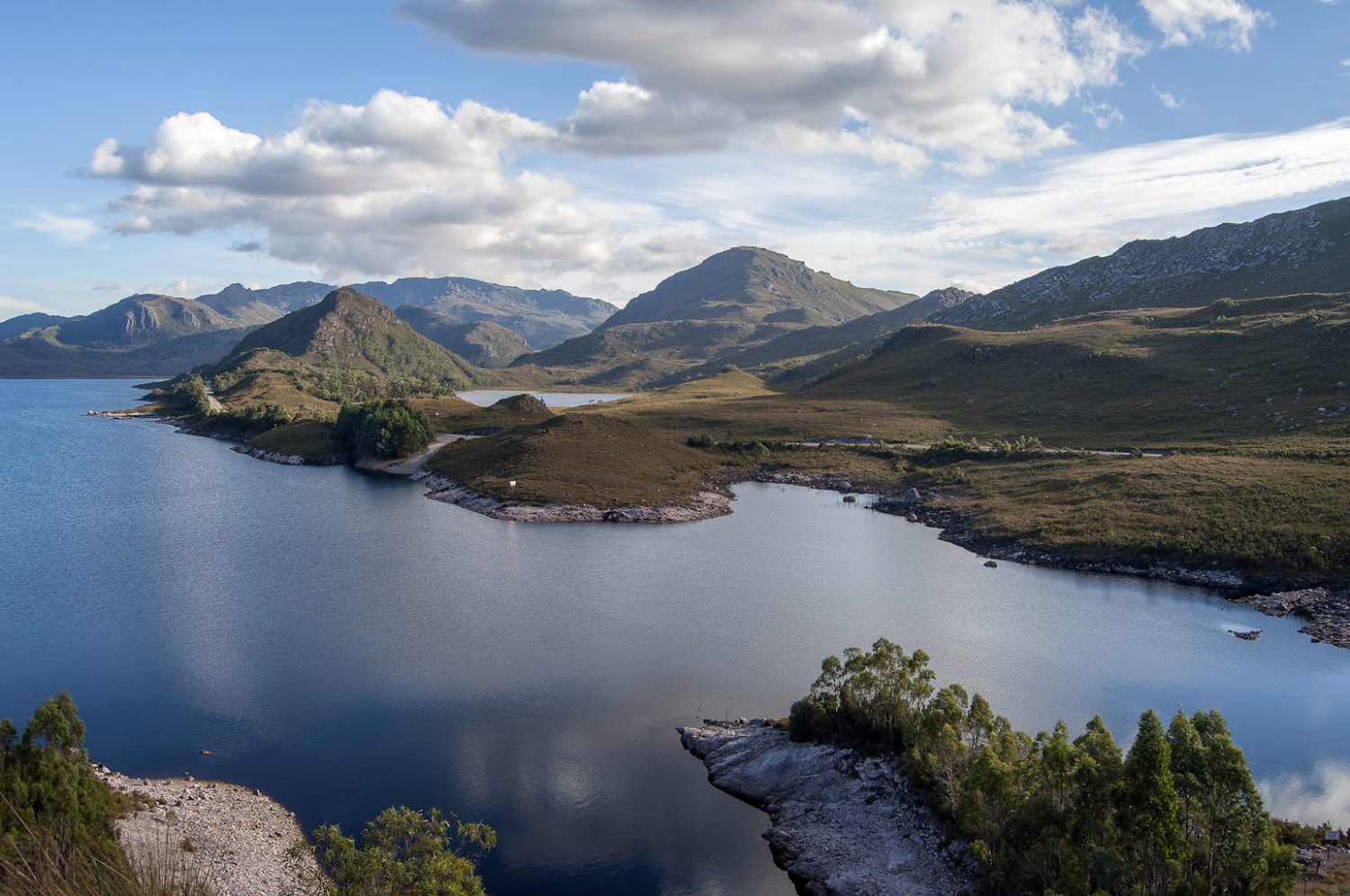 Formed as a mining community to support the nearby town of Rosebury, Williamsford similarly exudes an air of embarrassment, as if it was a mistake best left forgotten, containing barely any remains of its general store, post office and hotel. The prominent feature of Williamsford was its haulage system, named Hercules, which climbed over 500 metres in altitude and stretched over 1.5 kilometres. The haulage was closed in 1986 with the development of mining techniques in Rosebury. 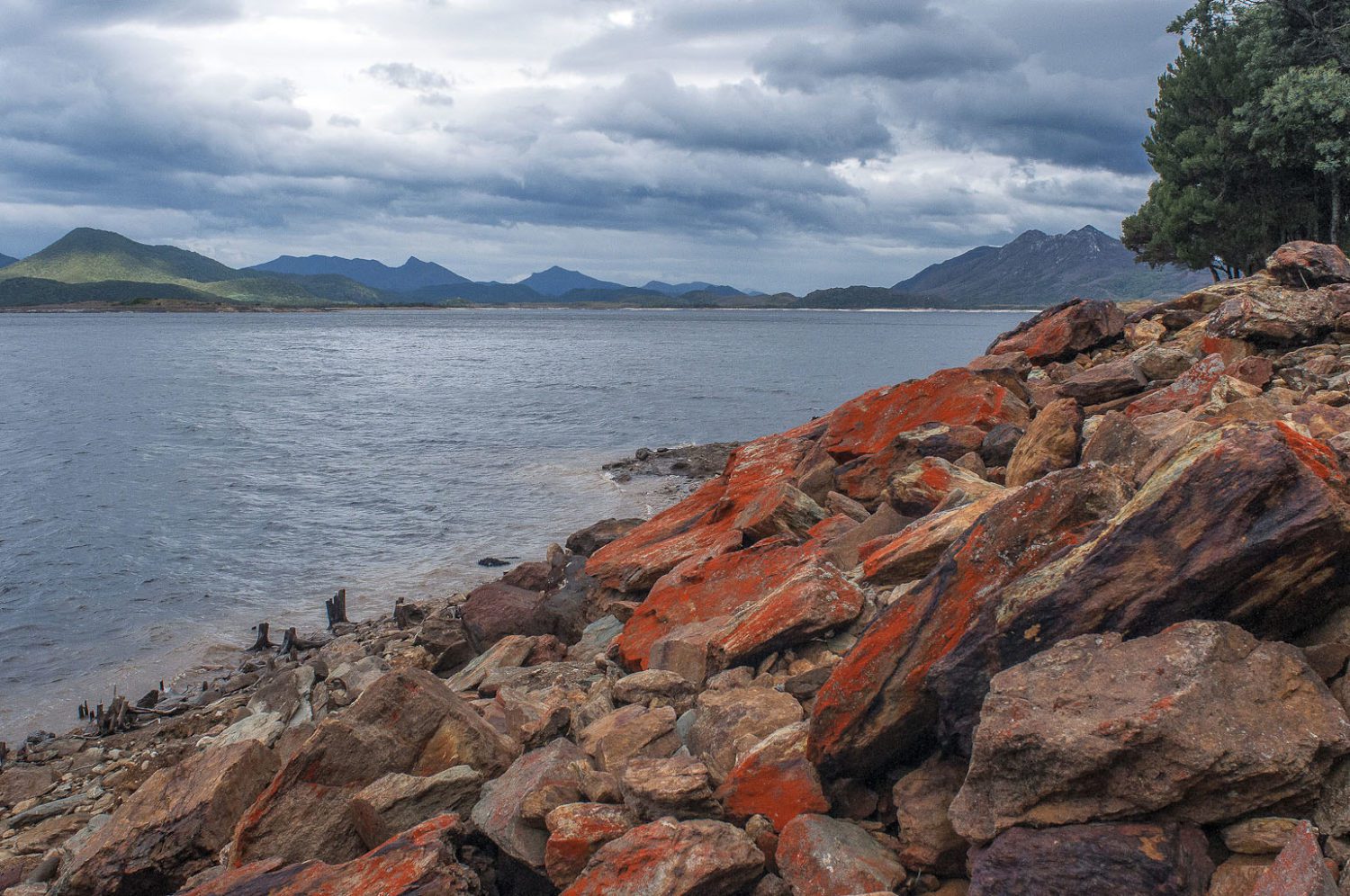 A lone plaque reveals that pioneers brought Williamsford to life during the late 19th Century in cold, wet, unforgiving country – the rugged environment failing to hamper their indomitable spirits. During its time, Hercules hauled minerals such as lead and zinc, which came from fine-grained volcanic sediments. Ore was also harvested and transported to Roseberry via an aerial ropeway, which still hangs precariously across the Murchison Highway – a curious relic of times gone by. 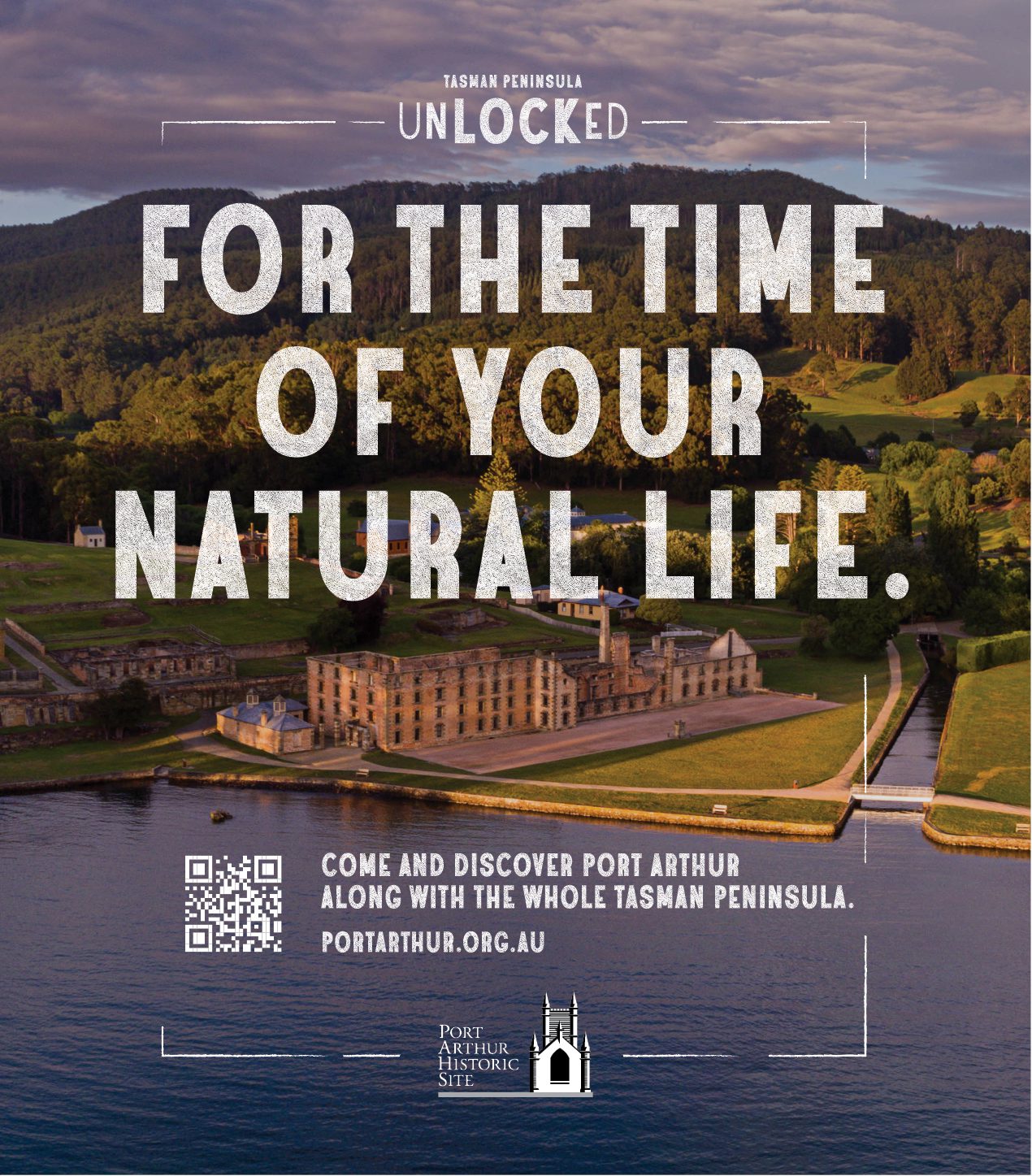