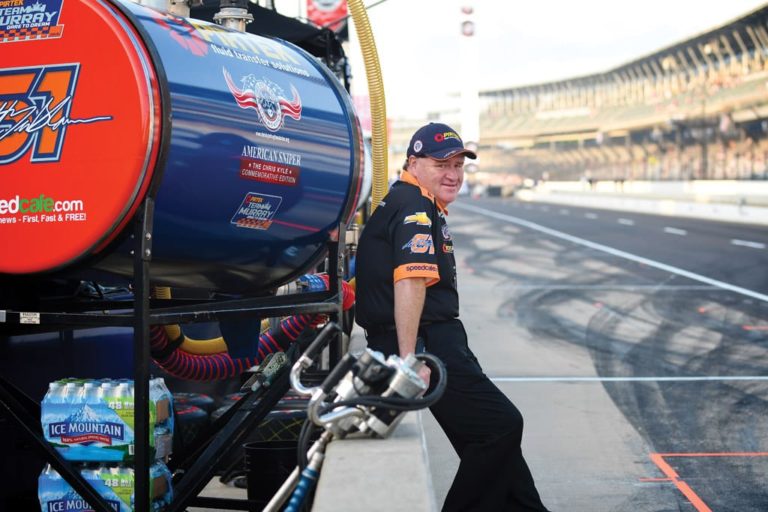 He left school at 16 to start a newspaper career, played gridiron for Australia in Europe and the US at 19, set up BAM Media on the Gold Coast on his arrival in 1989 and promoted and saved some of the country’s most significant events including the Gold Coast Marathon, Australian Golf Open and the Gold Coast 600, on which he was the biggest influence for more than two decades. Oh, he also spent time in an Indiana jail. 11 years ago he developed Speedcafe.com which has become the world’s biggest independent motorsport news website.

In 2016 he realised a life-long dream and ran his own car in the 100th Indianapolis 500 – the world’s biggest-ever one-day sporting event and hired Matt Braham, the grandson of the legendary Sir Jack Brabham to drive it.

A year later he turned author and put many of his legendary stories into an autobiography titled – Crusher – You Just Can’t Make That S#^! Up.

His contact book reads like a who’s who of international sport, business, entertainment and politics. While his achievements have been well documented, his influence behind closed doors is greatly underestimated.

Not bad for a kid who left home at 16 and who arrived on the Gold Coast in 1989 with a couple of hundred bucks in his pocket.

You arrived on the Gold Coast for a two-year stay in 1989 and you’re still here?
I have the luxury of being able to live anywhere in the world, and I choose the Gold Coast. You don’t have to be Einstein to work out why! I’ve lived in the US a couple of times in that period, but always wanted to get back here ASAP. Given the global pandemic of 2020, there is even more excuse to be here. I have always prided myself on being a loyal ambassador for the Gold Coast, and that’s unlikely to change.

BAM Media and now the BAM Group has become a Gold Coast institution over the last three decades, what’s driven that?

The business has always been and will always be about the people in it combined with a “can-do” and creative attitude. We have had some wonderful staff over the years, and we have provided the grounding for so much young talent, which has gone on to do some amazing things both nationally and internationally.

Speedcafe.com has been built into the biggest independent motorsport news site in the world, what has been the secret of its success?

I identified a gap in the media market among the emerging technologies and finally got the cash together to do it properly in 2009. I was determined to take old school journalistic ethics and apply them to a modern medium, and 11 years later, that mantra is still working for us. We have become a part of the motorsport community and always ensure we give back when we can. I’m proud to say that we are a home-grown Gold Coast product.

Your book was a terrific success and had some tremendously funny stories as well as a look at the more serious side of life. Is there another book in you?

It’s quite amazing because so many people read the book and say to me that they were expecting this or that story to be in it. To tell you the truth, many of those stories I had actually forgotten about, but I have made a note of them each time I am reminded. Given the list continues to grow, maybe “You Can’t Make This Shit Up Either” is a possibility.

Will there be a time when you slow down?

I’ve always said I have been scared to stop, or even take a holiday in the early days, just in case I liked it too much. There’s plenty more to do. I think the next chapter for the world will introduce a whole new set of challenges and opportunities. I look forward to watching my son Maximilian forge his career in property development and helping out where I can, but I can assure you that I do intend to head to The Grand Golf Club for more regular rounds. The Grand, which is the country’s best golfing experience, is my piece of sanctuary, amongst all the madness.