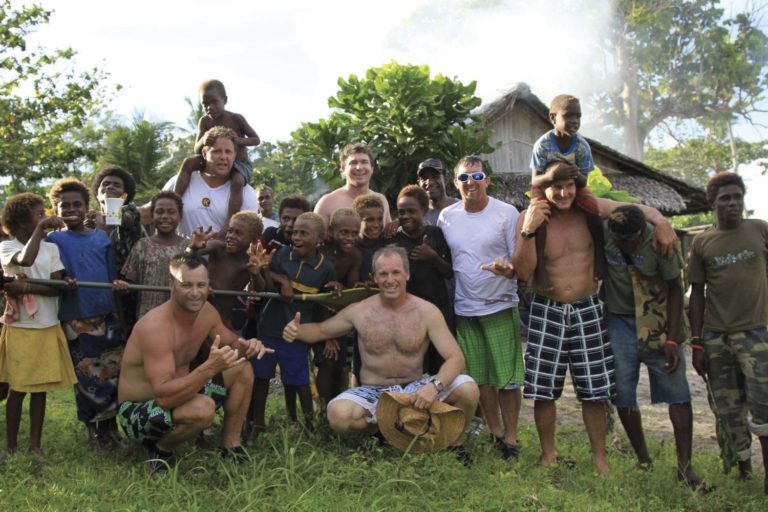 A group of mates on a surf trip to a remote part of Papua New Guinea discover great waves and a new outlook on life. 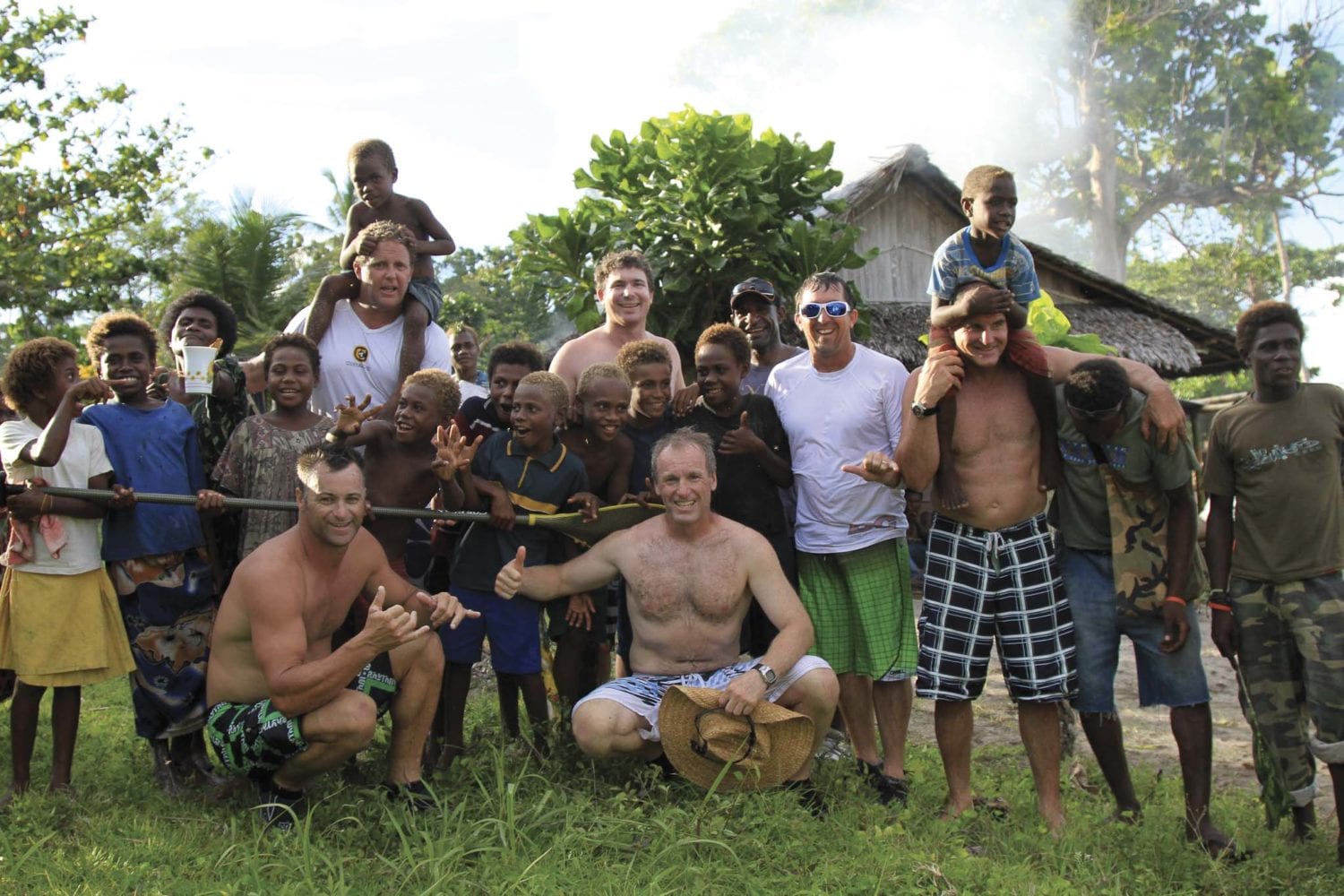 It is a stinking hot day in Port Moresby and I am standing at the international airport with eight mates and 550 kilograms of gear, including 15 stand up paddleboards (SUPs).

We have just flown in from Brisbane for a surf adventure that will take us to some of the most remote parts of Papua New Guinea, but at the moment our energies are consumed by the task of moving our substantial luggage 200 metres to the domestic terminal, where our flight to the northern island of New Ireland awaits. The heat is insane and the footpath is tarnished red from spit stained by betelnut, that intoxicating sour nut that Papuans young and old chew incessantly. 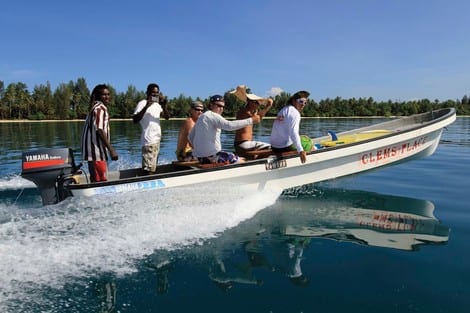 Our travel group has been drawn together by the prospect of getting away from it all and steering our stand-ups down the face of some virgin waves. We have brought camera gear to make a movie of our exploits and packed in school supplies, clothing and Titans fan gear to give to local children.

Our agenda has been organised by the Surf Travel Company and our destination is Clem’s Place, an isolated surf camp from which we can explore reef breaks previously unridden by surfers on SUPs. 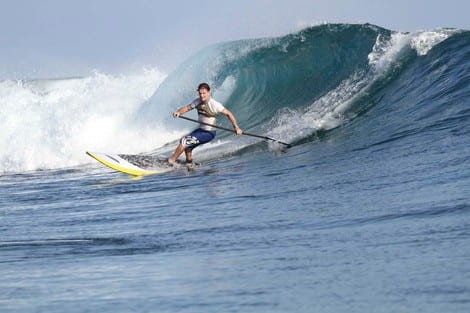 We arrive at the airport at Kavieng, nearly 900 kilometres from Port Moresby, at nightfall and everyone scrambles for the mossie spray. A short boat ride brings us to our first stop, Nusa Island Retreat, which looks like something out of Gilligan’s Island with its huts on stilts and sandy-floored bar.

On the first morning we take a 20-minute boat ride to a spot called Rawles Island, which is cranking – a perfect right-hander almost double overhead in height. Dale Chapman and I are first in the water and my eyes turn to saucers as I see Dale kick-turn around on a big set and fearlessly drop straight in. 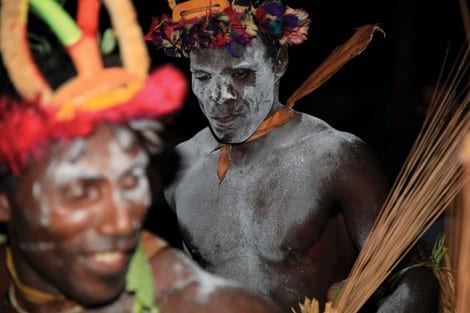 We spend a few days in the area and our surf guides take us to some fantastic breaks. They even relent and take us to the more sucky, shallow spots when they see how hard the guys in our crew charge on their SUPs. (Although I do push it a bit far one day – snapping my 8’11” in two!)

From Nusa, it is a three-hour voyage by boat to Clem’s Place, and even as we idle in we can see a perfect right-hander pushing through, straight in front of the camp. Clem’s is a pretty rustic place – there is no running water and the small generator that provides the power shuts off at 2am, bringing the fan above your bed to an untimely halt. 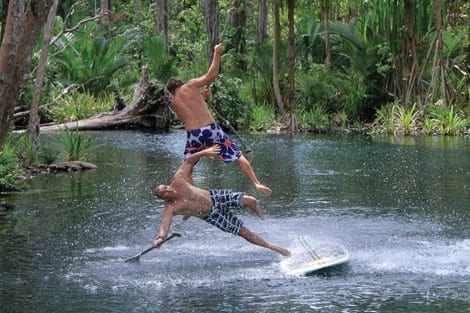 The camp has plenty of good qualities, however. The fishing is fantastic and on our first expedition we bag 17 fish in a little more than an hour, including yellowfin and bluefin tuna, Spanish mackerel, coral trout and Mangrove Jack. But it is the surfing we have really come for – and it doesn’t disappoint. 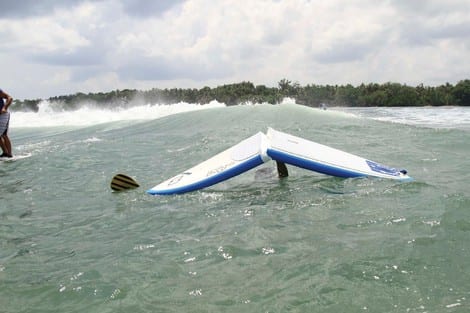 There is a break nearby called Step On Blood that supposedly can’t be surfed on SUPs. We take that as a challenge, rig up the camera gear and head straight for it. It is a slab of a wave that breaks on to really shallow reef with a heavy, pitching take-off. After a few shoulder take-offs we move further inside, pushing each other in. I make a late drop that draws hoots from the crowd but then wear the next three waves on my head. As I paddle back out with blood seeping through my wet shirt, the boys decide to rename the reef Step On Rob. 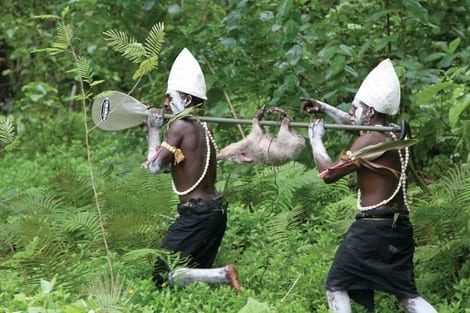 Clem organises a village meeting so we can distribute the gear we have brought. We present it to John, the village leader, which is a very moving experience for all of us. 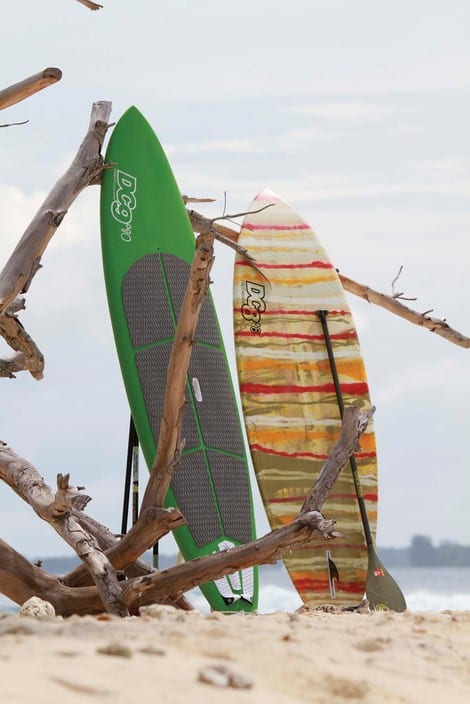 Clem has also organised a ‘sing sing’ for us, involving villagers from neighbouring islands. It is a truly special night, a spectacular display of colour, rhythm and jungle hospitality. Our cameras whir throughout, picking up priceless footage of the festivities. 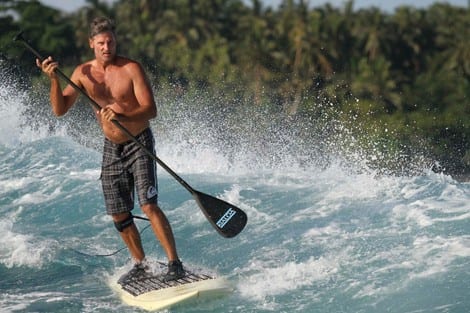 These wonderful people have so little in material terms but such a wonderful grasp on life. We travel up the river the next day, where life is even harder – no bricks and mortar, no boats, just villagers in dugout canoes living in the bush growing cocoa beans. It is life stripped back to the bare essentials and it is a humbling thing to see. 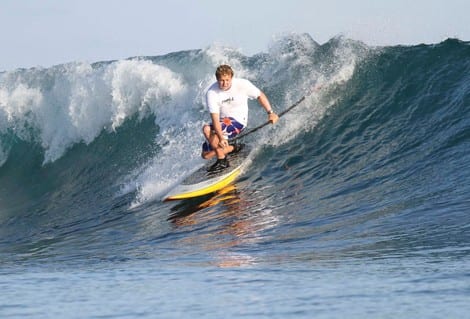 We have brought them small gifts, but these people have given us so much more in return. Talking to and filming the local villagers for two weeks, we see how beautifully they live, so much in tune with nature and their surroundings. We discover that when you let go of your superficial, material needs, the real you shines through and you begin to enjoy the simple pleasures of life. 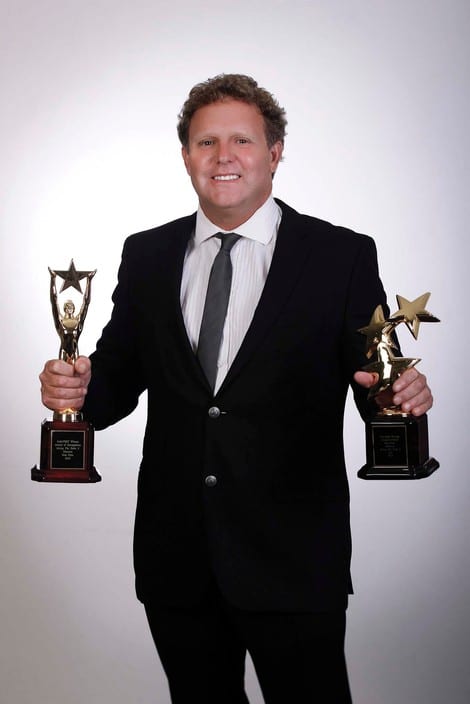 This trip has been a wonderful adventure, with some great surfing involved, but it has also been a wake-up call for all of us. We have learnt to listen to our inner selves and come to realise that sharing a smile costs nothing.

n Visit www.vonpiros.com to buy or rent the movies or available on the USA iTunes site, soon to be on Australian iTunes. 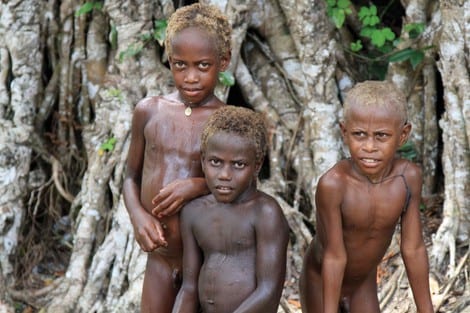 It’s been a great year for Gold Coast local Rob Pirie, Creative Director of Von Piros Productions, with his latest movie Living The Stoke 2 Fiji. Following in his success from his original movie Living The Stoke shot in Papua New Guinea which took out best Stand Up Paddle Film in the Reel Film Festival in Canada 2011.  Living The Stoke 2 Fiji has now racked up 15 awards worldwide with major awards in the USA based Global Film Competition and The Indie Fest Film Awards shown in this photo, plus a Diamond award film maker of inspiration in the International Film Festival in Jakarta. The movie is now being played in multiple film festivals worldwide.