Hola – The Snows in Spain 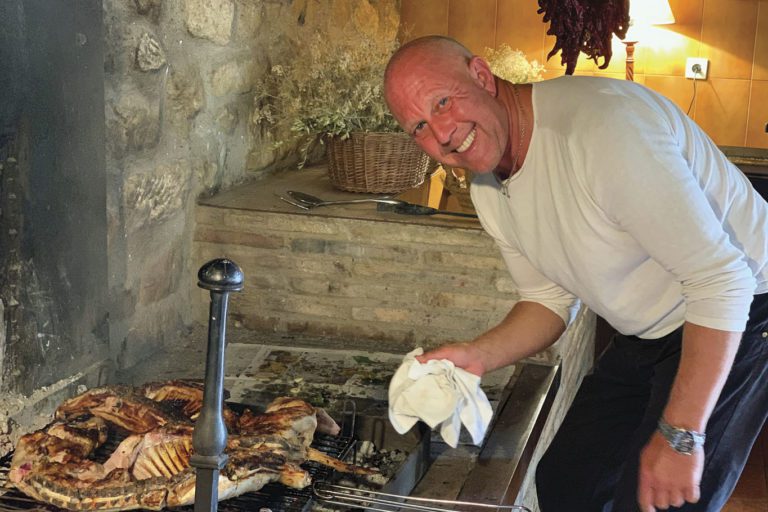 If ever someone suggests you relocate your family to live in the Basque region of Spain for four months, where you will reside in the grounds of one of Spain’s most famous wineries, while living in an 11th century monks’ cottage, please say ‘yes’. We did, and family Snow will never be the same… 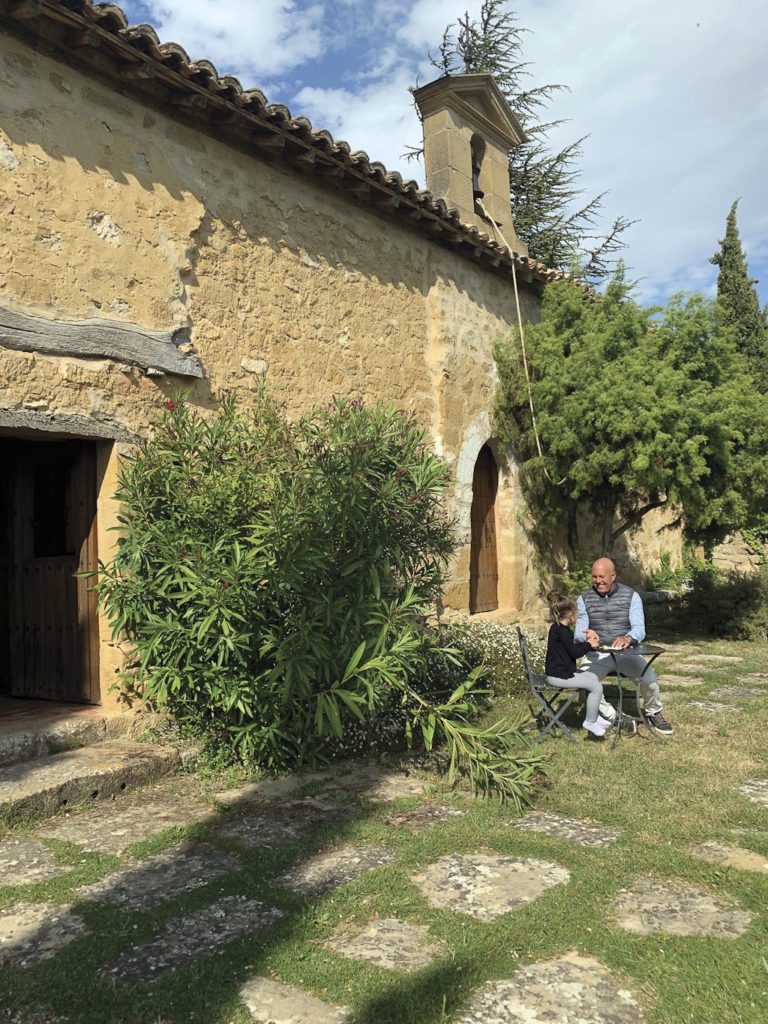 Allow me to tell you how this happened. At Fins (my restaurant in Kingscliff), we often host visiting national and international winemakers.

Marrying our seafood to their wines is fun, as new menu ideas often eventuate. A few years ago, a charismatic senor, Telmo Rodriguez (hereafter known as Telmo), from a winery named Remelluri located in la Rioja in the Basque region of Spain, turned up.

He and I drank wine, ate food, and chatted about life. I discovered that Telmo was a surfer when he asked if I could lend him a surfboard so we could surf together the next day.

With a few world-class wines under our belts, it all seemed easy. We arranged to meet at Cabarita headland the next morning. 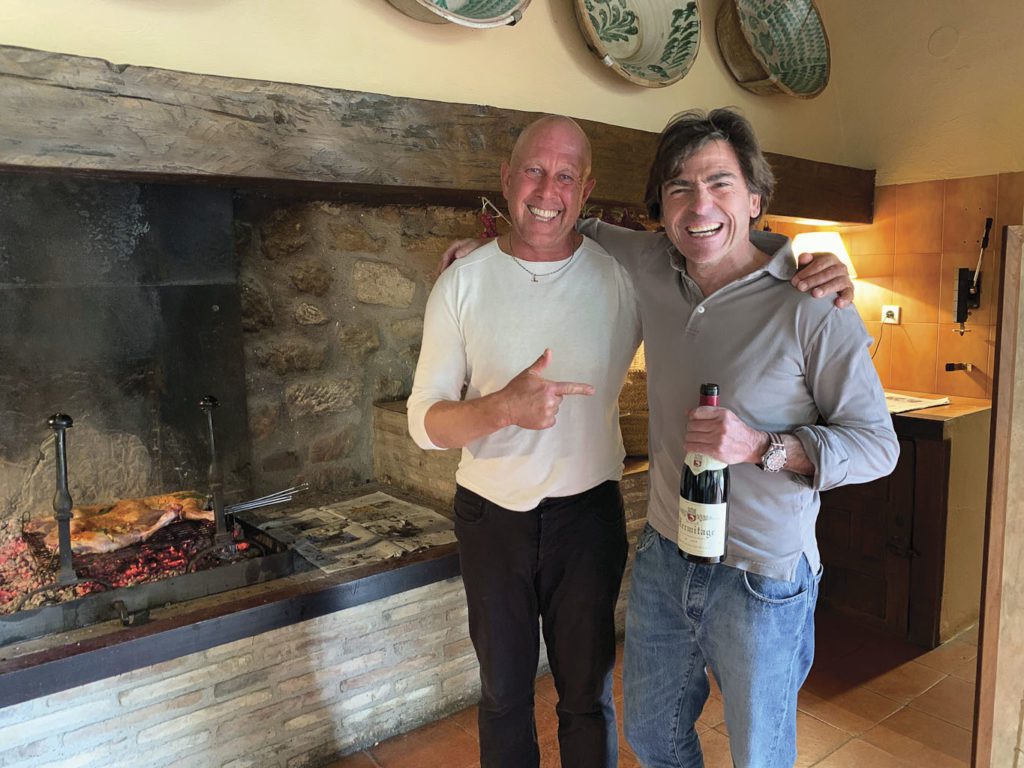 I arrived first and noted the waves were quite large. I thought to myself how ordinary it would be if I somehow managed to be part of the drowning of one of the great winemakers of the world. Telmo greeted me and inspected the surfboard I had brought for him to use.

I proffered that there were a few big sets coming through. Unfazed, Telmo inquired if there may be a place a little less crowded.

The only place was the other side of the headland where no one was surfing. With trepidation, I agreed to surf there while mentally rehearsing CPR techniques. Telmo took the first wave and, wow, he could surf.

We laughed, joked, and had a memorable time together. Experiences like this cement friendships. Telmo suggested I come to Spain and hang out, perhaps do a bit of cooking; I nodded in furious agreement.

In life, we are always too busy to readily embrace change. Perhaps we don’t want to interrupt school or feel our business or career will suffer.

Get over it. There is never a ‘right’ time, so don’t bother waiting; just go.

If I’d stayed at home and had a few surfs out the front and gone to work at Fins, it would have been enjoyable, but possibly I would have remembered little of this time when looking back on my life.

In contrast, I will certainly remember our adventure in Spain. To suggest our first day was interesting would be an understatement.

After driving through the welcoming gates of Remelluri, the highest vineyard in la Rioja, we were mesmerised by the sheer beauty of the region. Snow-capped mountains to the south and Rocky Mountains to the north, with a 1000-year-old monks’ temple atop the summit. All good, even picturesque and great, until we are startled by a deafening boom as a shot rings out from somewhere in the vineyard. 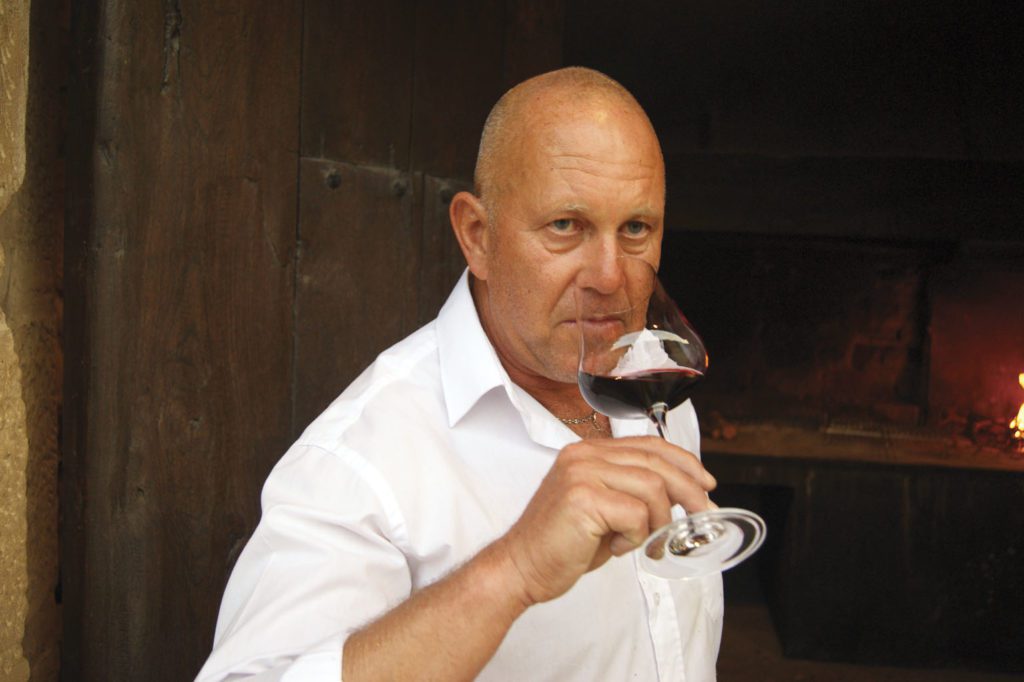 My wife Morgan and daughter Navada hit the deck while I slowly ease my way to the front door. Conveniently, it has a small ‘peek hole’, and as I look beyond the vines, I spot a hunter dressed in full camouflage gear.

Disconcerted and somewhat worried, I call Telmo (the superstar winemaker who owns the property), who nonchalantly informs me that the hunter is there to cull the wild boars from decimating his vineyard. The girls crawl out from under the beds, and so our first day in Spain begins.

Telmo has organised for us to visit the nearby town of San Vicente. Like every town in Spain, it has a church and many bars with tapas and local wines. Unlike every other town in the world (except one in Mexico), it allows self-flagellation. 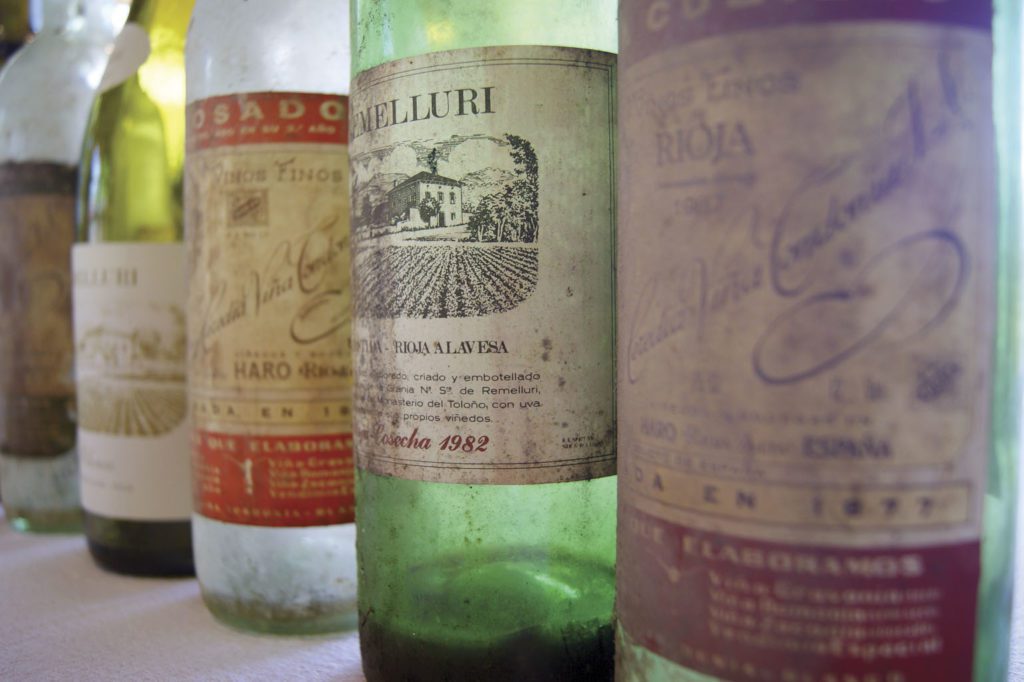 Locals and visitors descend upon the small bucolic town for the passing parade. There are drums, trumpets, floats with effigies of JC, priests, monks, nuns, and beautiful white horses, but the thing that caught my attention was the public display of self-flagellation.

Picture a man, chained at the ankles, head covered by a hood similar to those worn by people just prior to being hung by the neck, blindfolded, and attached at the wrist to a ‘seeing eye person’ who leads them along the cobblestone path past the throngs of peering onlookers.

To complete the picture, ‘the sinner’  is dressed in a sack-like robe with an opening at the back that allows him to flog himself with a knotted, cane whip that draws blood with every stroke.

People line the streets intrigued by the spectacle while sipping on red wine and enjoying barbequed chorizo rolls. Kids play merrily, some eat ice cream, and family Snow is in a state of jetlag and disbelief.

I am informed that, unbelievably, the sinner/sinners (I spot female flagellators as well, but we will make no further mention of them) volunteer for this role in what seems to be an existential local pantomime. The Catholic Church still holds plenty of sway in Spain, and this bloke was hoping to make good on sins he had committed.

Good luck with that, mate.

As the hills are alive with the finest tempranillo grapes and there are trained counsellors in most Spanish towns, I did wonder if perhaps the sinner may have chosen a better way to repent. Anyway, each to their own and on with the show. I figured if that’s what you volunteer to do then the least I could do was drink wine and cheer the hooded unfortunate from the sidelines.

A wonderful day was had by all, and you will be relieved to know that for the remainder of the afternoon all we had to do was kit up to combat the five-degree centigrade temperature.

Cheering a public flogging tends to build hunger. Fortunately, Telmo had sourced a local milk-fed lamb (cordero) and suggested that if I would cook it, he would open some wines.

When Telmo says he will open wines, we’re talking unaffordable, outrageous, rarely sampled wines, many with more than 50 years of bottle age. I thought it prudent to immediately build a fire, marinate the lamb, and allow the night to begin. 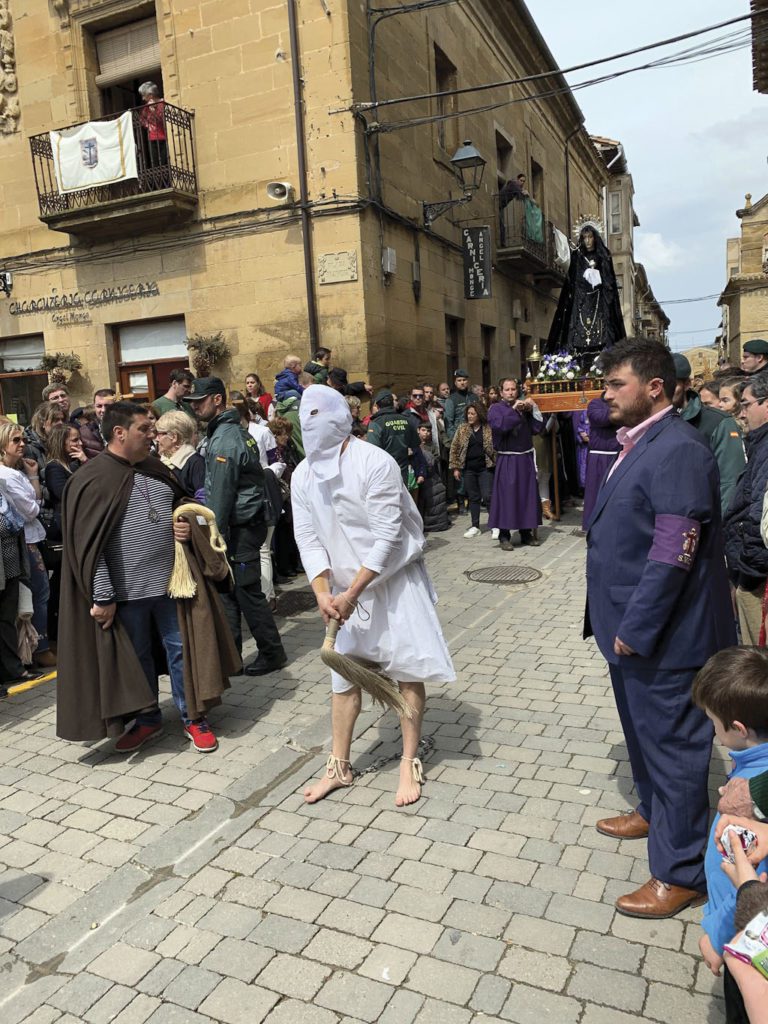 Now, Telmo is not some cigar-chomping businessman from the big city. In fact, he is a passionate man on a mission. Over hundreds of years, Spanish grapes have been replanted with French varietals, relegating the traditional Spanish grapes to the background, some to extinction. Telmo searches out small plots still growing these grapes, buys the plots, and adds his alchemy to deliver wines that are both unique and amazing.

The dining room was constructed with mud brick, while unfinished local wood was formed into high ceilings and wooden rafters. Inside, there was a fairly basic kitchen to one side, an open fireplace to the other. Priceless pieces of art, some depicting the landscape at Remelluri, adorned the walls — the most striking painted by the family matriarch. 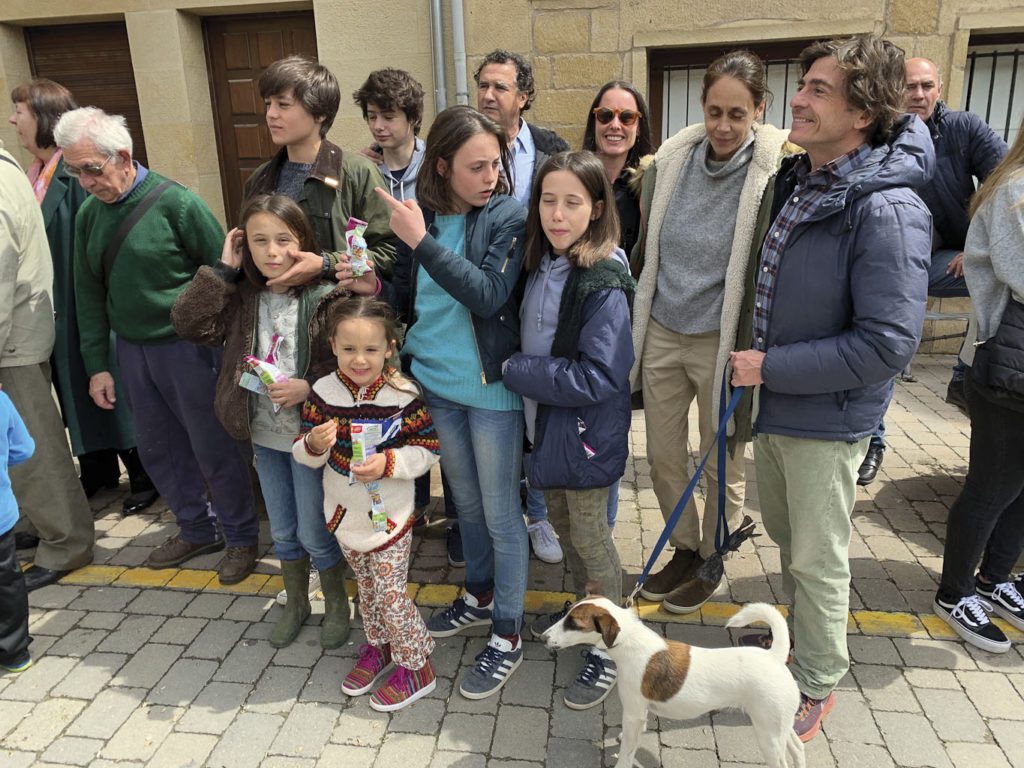 Telmo would always instruct the guests as to where they should sit. For tonight’s dinner there was Amaia, who is Telmo’s sister, Oxford-educated and officer-in-charge of operations at the family winery. However, her main attribute was as an extraordinary human. In addition, there was a fine mix of family and friends.

Morgan and I collected vegetables from the estate’s overflowing garden. I basted the lamb with fresh bay leaf, rosemary, and Remelluri red. The mixture of smoke, basting liquid, and lamb drippings provided the aromas to complete but not compete, with the exceptional wines and company on offer.

Things were certainly different in Spain. In a day, we had experienced things that would usually never occur in a lifetime.

Later in the trip, we cooked for what I perceived as European royalty serving course for course with the best chefs in the world. In fact, three of the top 50 best chefs own (sometimes humble-looking) restaurants nearby.
I would cook with every one of them. Hmmm big competition, but that’s a story for our next article. 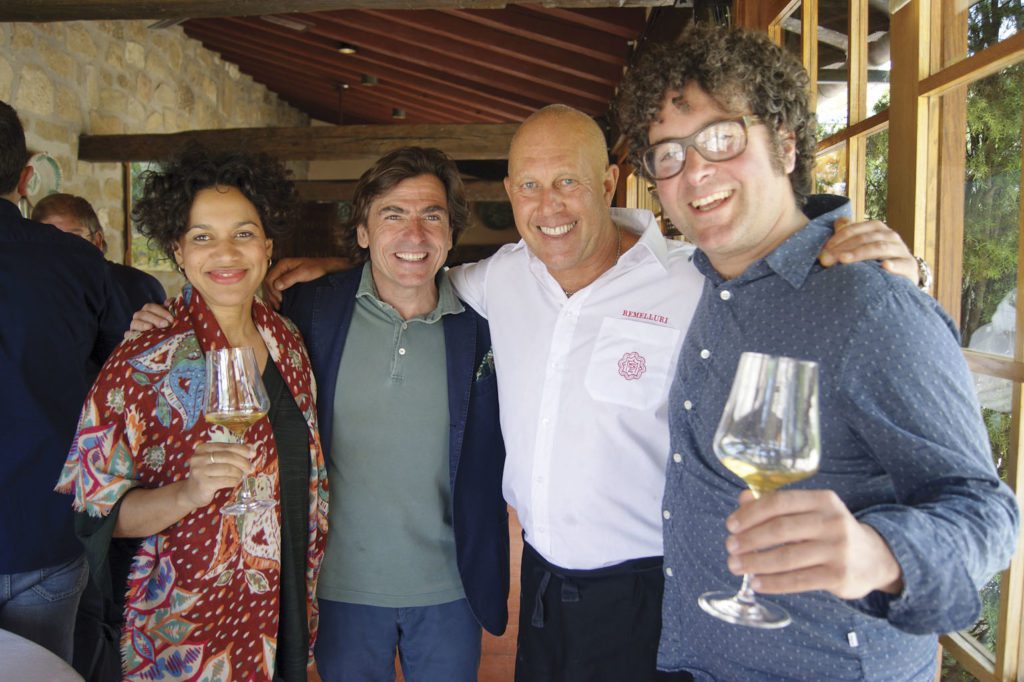 Our first day was a success. We wondered what else would occur in the following 100 days — the short answer is plenty.
We had made the right decision relocating to Spain, and this was but day one!

* Read the second instalment in our next issue…