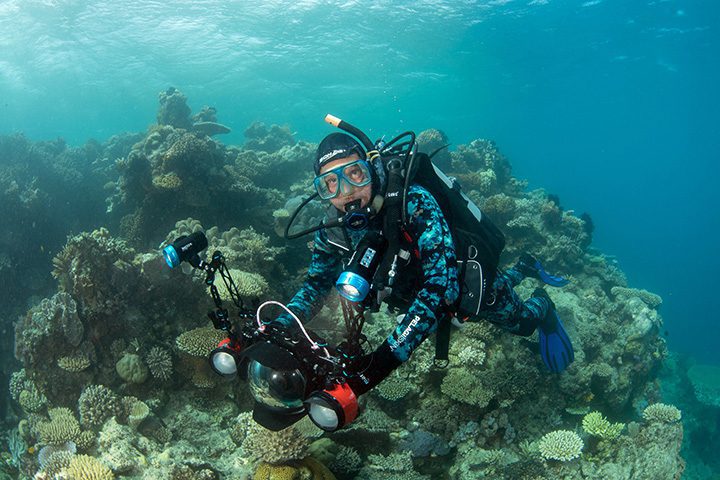 The ground-breaking work of the Southern Cross University marine scientist who first discovered the dazzling coral sex phenomenon will be shared with Australian audiences on ABC TV’s Reef Live this weekend.

Professor Peter Harrison was a young PhD researcher in 1981 when he and other James Cook University colleagues found themselves immersed in a once-a-year mass coral spawning event during evening dives off Magnetic Island, near Townsville.

The group’s discovery stunned the scientific world, earned them a Eureka Award and rewrote the textbooks. The prevailing belief was that corals brooded and released their young continuously throughout the year.

The experience not only changed Peter’s life – reaffirming his decision to be a marine scientist – but set him on a trajectory to do all he could to understand and preserve the corals of the Great Barrier Reef and coral reefs around the world.

“I still get inspired by these big coral spawning events even after 40 years. It represents the rebirth of the reef each time it happens. It really is one of the world’s most extraordinary wildlife events,” said Professor Harrison.

“The discovery itself was really exciting. Not only were we overwhelmed by the sheer spectacle of seeing so many different corals release their egg sperm bundles synchronously like an underwater snowstorm where all the bundles were coming off the corals and floating up to the sea surface where they broke apart for fertilisation, but we also realised the global significance of this event.

“Because these mass spawning periods only occur a few nights each year, it is absolutely critical to the regeneration and survival of coral communities that build the reef.”

The lunar cycle triggers the annual event in late spring and early summer along the Great Barrier Reef. In the frenzy of ejaculation, likened to an underwater snowstorm, many species of coral simultaneously shoot trillions of eggs and sperm into the water for external fertilisation. As they spawn, a giant slick appears on the ocean surface. The baby corals, now in larvae form, are swept along by currents and tides for several days before settling to find a suitable site and start a colony on the reef.

“I hope that everyone who watches ABC TV’s ambitious Reef Life broadcast understands more clearly the fragility of coral and their critical roles in building reefs that support entire ecosystems,” said Professor Harrison who is currently at Heron Island and One Tree Island in the southern Great Barrier Reef.

“The spectacular phenomenon is usually only observed by scientists, divers and marine enthusiasts. This front row livestreamed broadcast is truly remarkable in scale and will highlight the wonders of these simple yet critically important marine creatures.”

“I grew up swimming in the seagrasses of Sydney’s northern beaches which delighted me as child and inspired me to study marine science. The coral spawning event is one of nature’s wonders and I’d like to see it inspire the next generation of marine scientists and leaders.”

Although they superficially resemble plants or rocks, corals are animals (marine invertebrates), with a cup-shaped polyp and tentacles for catching prey.

The major threat to the world’s coral populations is mass bleaching – often resulting in death – caused by climate change. Corals rely on millions of microscopic algae symbionts to provide the bulk of their energy and much of their colour. When exposed to sustained abnormal heat, corals begin to expel the algae leading to mass bleaching.

“Corals are highly sensitive to environmental changes. Increased water temperatures of one or two degrees may not seem like a lot but it’s significant for coral health. If a child’s temperature were to rise to 39 degrees, we’d be worried and seek medical help.”

“As an Australian I am incredibly passionate about making sure that we pass on to future generations a healthy, thriving marine environment. Coral reefs are incredibly important as centres of marine biodiversity and the Great Barrier Reef is worth billions of dollars to the Australian economy each year.”

Over the past eight years, Professor Harrison has been leading a series of increasingly larger scale reef-based projects and for the first time in the world his team has started successfully restoring breeding coral populations on badly degraded reefs in Philippines and more recently on the Great Barrier Reef using his larval restoration method, also known as Coral IVF.

“We capture hundreds of millions of egg-sperm bundles from spawning corals and grow larvae in floating larval pools on reefs and then when they’re ready to settle after about six days’ development in the pools we target the release of these larvae onto damaged reef areas that no longer have good cover of live corals,” said Professor Harrison.

“Last year we reared more than 150 million larvae on the Great Barrier Reef which is another world record and so I’m super excited about expanding this research to much larger reef-scales to restore larger areas of the GBR and other reefs overseas.”

Underwater robotics is partnering with ecology in this challenge. Queensland University of Technology’s Professor Matt Dunbabin is trialling LarvalBot to help increase the effective delivery of coral larvae.

“The marine robot called LarvalBot helps target the release of larvae onto the right areas of the dead and damaged reef systems,” Professor Harrison said.