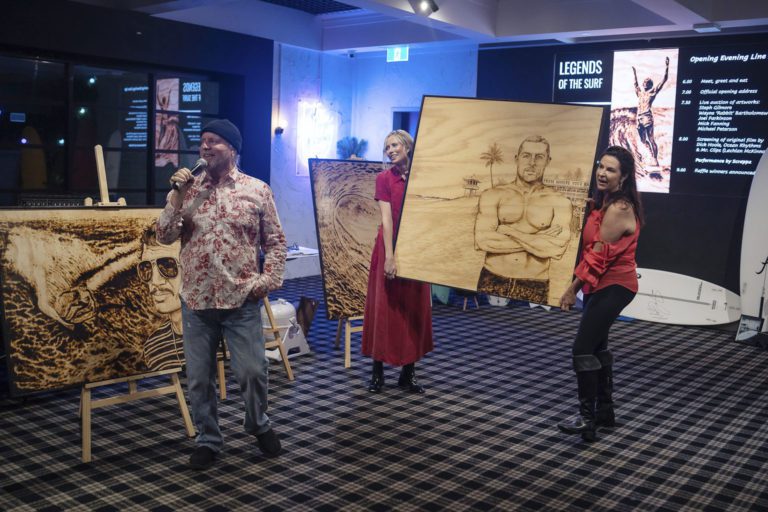 The official opening of the Legends of the Surf on Saturday night at the Coolangatta Sands Hotel was an epic evening that saw an incredible wave of support from surf royalty and the community alike, with awesome fundraising outcomes courtesy of the sales of generous donations of The Surfboard Warehouse, The Surfboard Agency, Surfing Life and live auctions of five portraits created by Emily Rose Hastie. 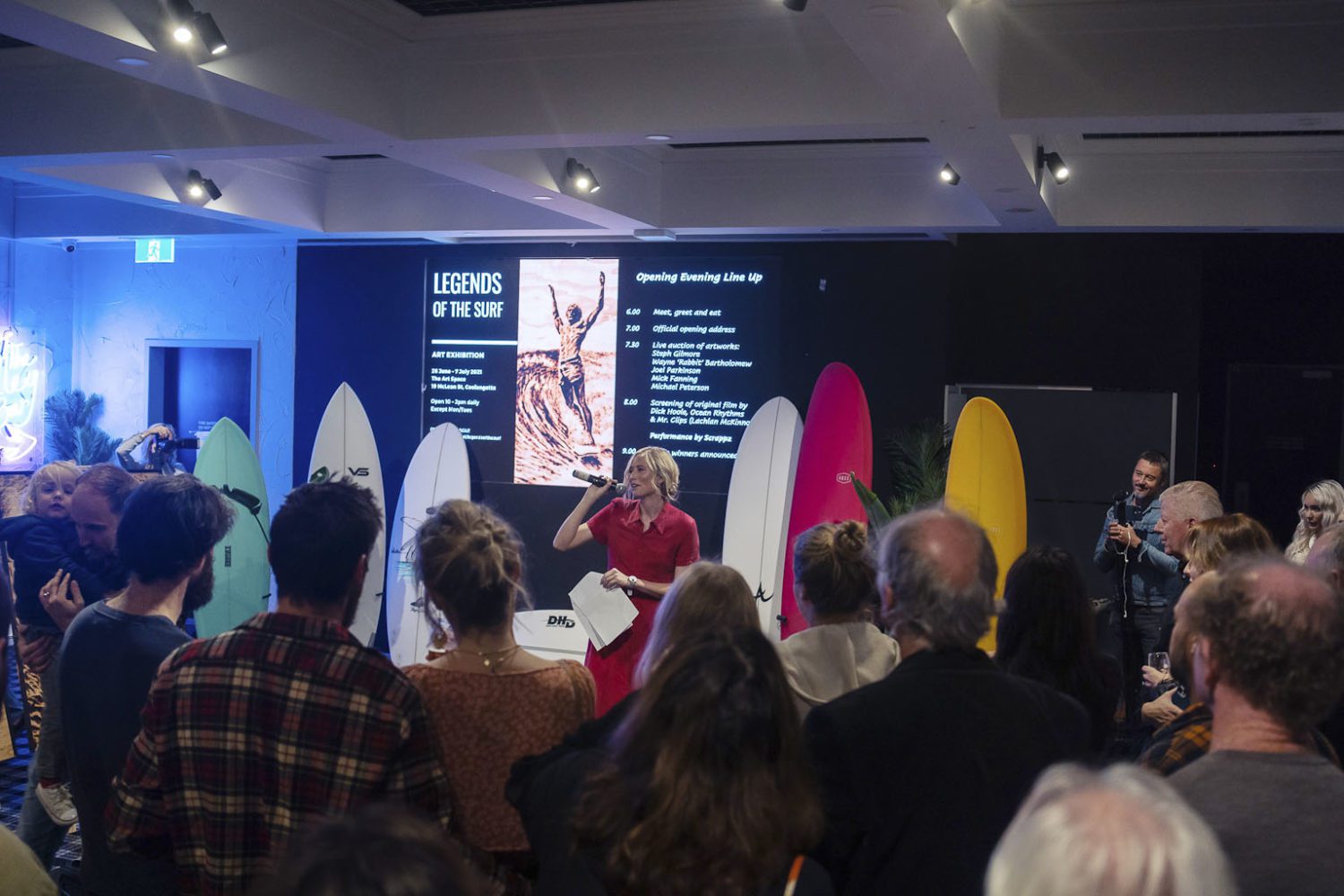 Everyone from the community pulled together to create an extraordinary night of celebration of our unique and world-class surfing heritage, as well as to raise funds for mental health initiative LIVIN, and coastal conservation groups Surfrider Foundation Gold Coast and Gold Coast World Surf Reserve.

The event was graced with the presence of the featured legends and their family, including World Champion Rabbit Bartholomew and the greatly beloved Joan Peterson, mother of ‘the King of Kirra’ himself Michael Peterson, who turned 89 only the day before. Both Rabbit and Joan Peterson had the crowd in stiches recalling stories of Coolangatta’s colourful surfing history.

The live auctions of original pyrographic artworks depicting Steph Gilmore, Rabbit, Mick Fanning, Joel Parkinson and Michael Peterson were heated and a massive success, culminating in Joan Peterson’s winning of Michael’s portrait for an awesome $3200, of which $500 of this was generously donated by the Kirra Surfriders Club where MP was a member.

Joan also rocked the crowd with the exciting announcement that well known Australian actor Sam Worthington has promised her a feature film of Michael Peterson that is to be her 90th birthday gift – meaning there is only 12 months in the pipeline until its release! 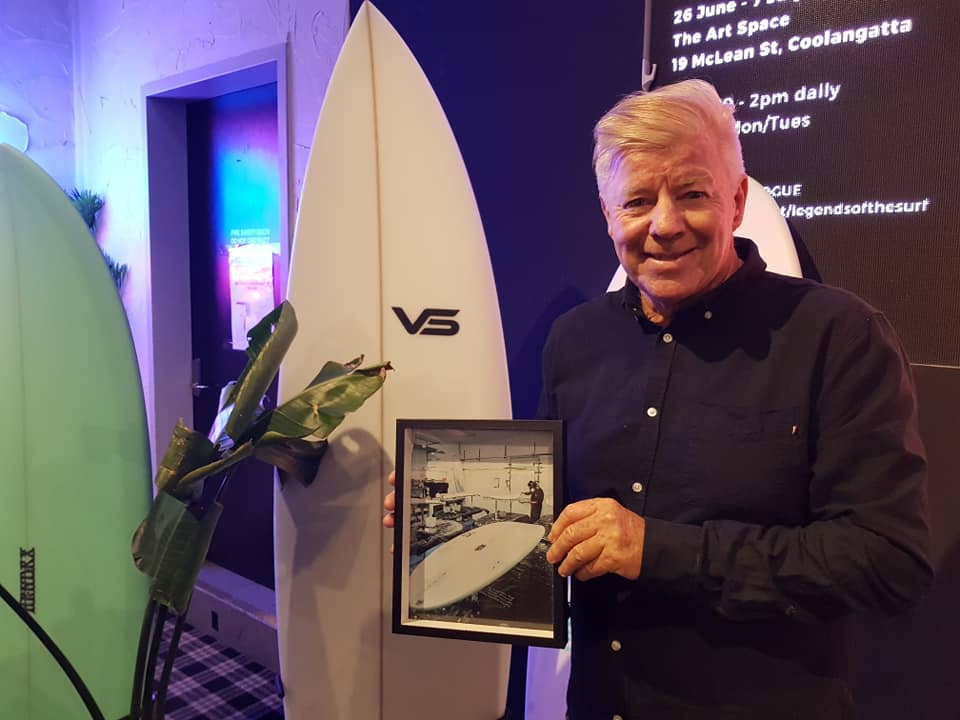 Musician Keo Bartholomew, Rabbit’s son, played drums for his final gig with the band Scrappz. Keo, who is learning how to make surfboards with the S-lab, blew the crowd away with an electrifying performance, while Dick Hoole introduced never seen footage of 1975 swell at the Hawaiian Smirnoff Pro and Burleigh breaks. This was followed with stunning surfing clips from Steve Core’s Ocean Rhythms courtesy of Warren Delbridge, as well as thrilling original and current Redbull content from Lachlan “Mr. Clips” McKinnon.

The raffle saw another incredible moment with the Surfboard Agency’s donated softboard signed by Mick Fanning and The Surfboard Warehouse’s donated flying fish featuring a Posca artwork by Emily Rose being respectively won by a young couple in attendance who having just missed out in the auction. 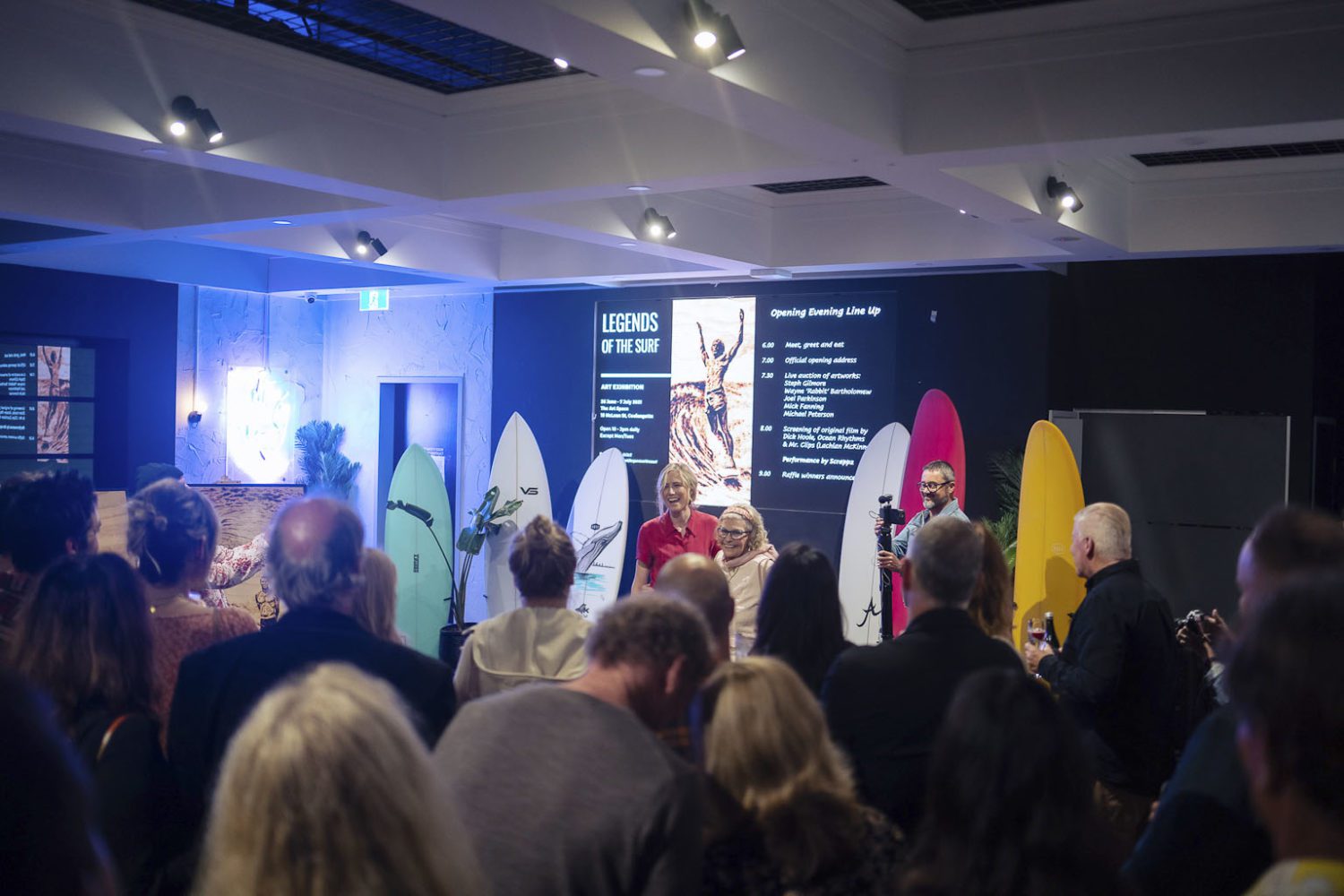 There was no denying the Legends of the Surf launch was a successful night full of the wonderful spirit of community, generosity and appreciation. The exhibition is free and open for public viewing for the next week at The Art Space Coolangatta between 10 and 2pm, located on 19 McLean Street featuring all 15 artworks of local surf legends. Ten artworks remain available for online auction via fundraiser. Support/legendsofthesurf.