"DOWN AND OUT IN PARADISE" A MEMOIR – EAST. WEST. SEX. DEATH. 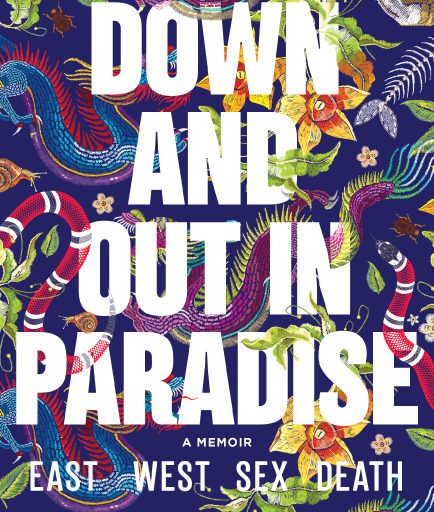 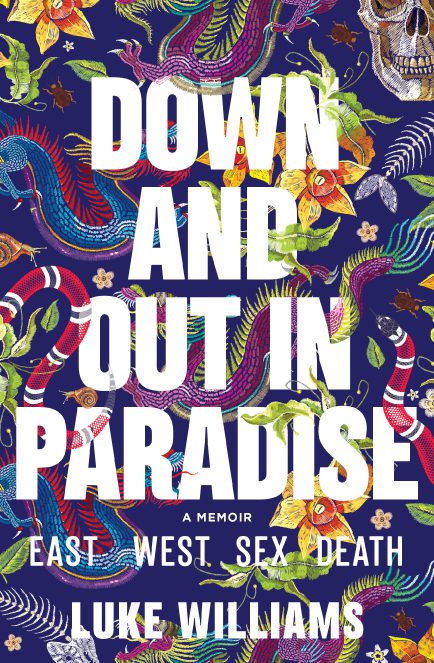 What started out as a longform piece of travel journalism, a kind of tell-all exposé, an exploration into the strangest things Westerners do when they do East, has evolved into this beautifully dark and humid piece of narrative non-fiction. Down and Out in Paradise (Echo, September 2019) is a brilliant read. Part lyrical and poetic, part gonzo journalist mad memoir of madness and meditation, it is as breathtaking and claustrophobic as it is liberating and scary.

Well, how it really started – as most adventures do – is escape. Luke Williams had had enough of drug addiction, hard drugs, high rents and cold nights, and wanted to get the fuck out. So he pissed off. Airport. Bought a ticket and flew to Kuala Lumpur, coming down off crystal meth. No plans. No meth. Not much cash. Not much of anything else.

Less a destination than an escape, what follows in Asia – Thailand, Bali, Laos, Malaysia, India, the Philippines – is a three-year adventure in freelance journo work, sex work, drugs, Buddhism, prison and a psych ward. It’s about getting out. Getting on. Drying out. Fucking up. Coming down. Coming to terms. It’s about ghostwhisperers, opium smokers, moneyboys, ladyboys, lovers, murder, cults, cannibals, cheap living, cheap sex, and even cheaper drugs. It’s an exploration of tropical beaches, fecund jungles, misty mountains and the lonely depths and hollows of the interior. Harrowing headspaces. Chance and change. Choice and class. Ego and freedom. Totem and taboo. History and belonging. It’s wild, it’s exciting. It’s searingly honest.

Luke immerses himself fully. Goes beyond, way beyond, reportage. Luke pushes the button of what is gonzo, flips the switch, flips out, drops in, inserts himself into the narrative without dominating it, while aspects of his own history – his dreams, disappointments, urges, his struggle with inherited mental illness – begin to catch up with him. Luke has the keen watchful eye of the perpetually lonesome observer/artist/writer, and participates in the action while remaining a ghost. The Outsider. Luke’s writing captures the nuances of his fragility and sensitivity, and pushes language into new places and new forms, the result of which is an experimental, innovative, fast-paced and ever-surprising travel-guide, a complex mix of memoir and reportage. Like Luke, it is edgy, mad, crazy and schizophrenic. It’s also tender, raw, sad, and beautiful. So beautiful. His editor has worked with this, and with him, rather than against it, allowing the writing to breathe, giving it room, leaving it true and pure.

The overall effect is like a shot to the arm, a gutful of hot curry, a clash of catcalls and close living. A salad of sweat, smells, seediness and sex, and the strange peace and spent satisfaction that comes with an experience of South East / Tropical Asia. And, like the countries Luke visits, the book is impossible to pigeonhole. Less a destination, more than an escape, Down and Out in Paradise is a mad cacophony of a thing, like the sting of a chilli, it will leave you wanting more.

I’ll leave you, the reader, to delve into, and discover what Luke finds. It will prise apart your head; it’ll catch on your heart.

Luke Williams is a two-time Walkley journalist which a penchant for finding strange stories. He has a hot temper, a history of depression and a big heart. He comes from a long-line of white working class people with alcoholism or schizophrenia. He has degrees in law and history. He used to use intravenous drugs. He’s been in rehab, a psych wars and jail. He’s a former sex worker turned full-time book slut. His first book The Ice Age: A Journey into Crystal-Meth Addiction was nominated for both a Walkley and the Nib Waverley Literary Prize. He has worked at the ABS as a radio presenter, and as a reporter for Triple J and Thomson Reuters. His writing has been published in Vice, The Guardian, The Sydney Morning Herald, The I-Paper (UK), The Sun (UK), The Daily Star (UK), Good Weekend, Good Reading, The Saturday Paper, The Daily Mail, The Adelaide Advertiser, Crikey, Triple J magazine, The Weekend Australian, Mamamia, and Eureka Street. In 2013 he was nominated for a Human Rights Media Award for a long-form investigative piece in The Global Mail. A series of popular travel articles he wrote for news.com.au last year has been subsequently re-published in France, India, Brazil, Romania, Vietnam, Nigeria, Ghana and the UK. He lives in Bundaberg.