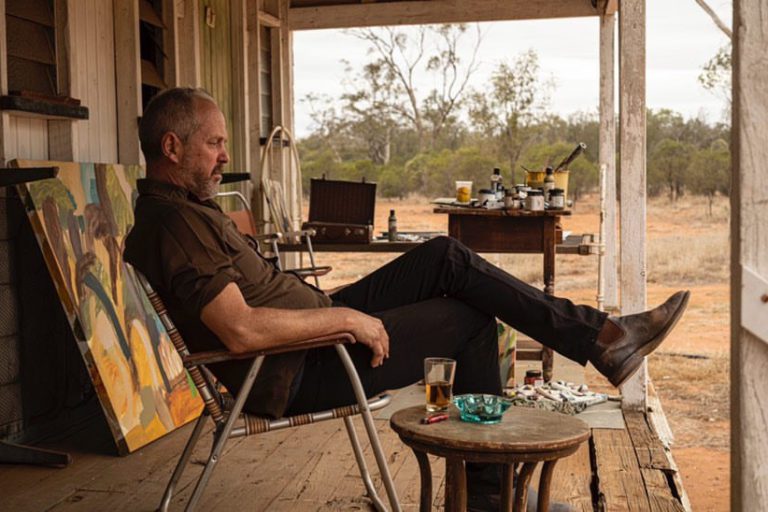 David Usher has been a practicing artist for over 30 years. He began his studies at Seven Hills Art College in Brisbane in 1983. His primary interest is in painting but in 1986, he started working in Kitty Art Pottery where he was working as a technician, glazing pots and loading kilns. His girlfriend at the time, Monica, worked patiently to teach him how to ‘throw’ on a pottery wheel, and although he began to make small wheel-thrown forms, he was always too distracted with getting to the Gold Coast whenever the surf was up. 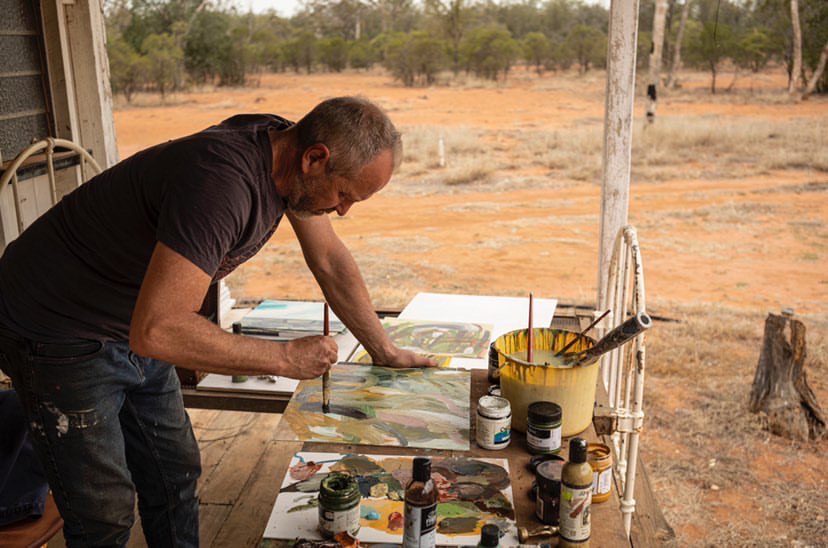 Usher continued to work in the ceramics studio in Albion until a well-known Gold Coast potter; Errol Barnes offered him a traineeship in his studio/workshop at Springbrook, Gold Coast Hinterland. 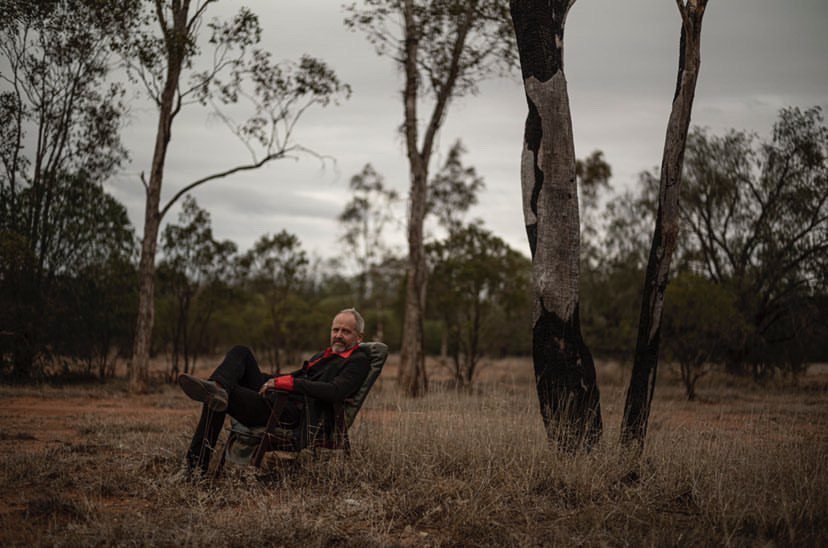 Usher packed up his family (Monica and daughter Libby) and headed down to the bright lights of the coast. He spent the next 3 years learning his craft and began to paint his images onto the ceramic forms he was making. He was fortunate to be in the right place at the right time during 1988/89 when the Ray Hughes Gallery sent a group of their artists up to work with Errol and to paint their ideas onto forms that Errol was making for them. The artists who came were some of Australia’s leading creatives, including William Robinson, Joe Furlonger, June Tupicoff, Ian Smith, Robert Moore, Michael Barnett, Gavin Chilcott, amongst others. David’s role at the time was to provide technical support, but he had the opportunity to get to know them and watch them work. These experiences helped to forge his own practice and he was encouraged by the others to ‘paint your life’, tell his story through his arts practice, and he hasn’t looked back. Developing his practice over the past decades and subsequently having the opportunity to exhibit with a number of his friends and heroes.

Moving back to Brisbane in 1990 to set up a studio with his wife Monica. David began exhibiting his works in Brisbane in 1993, beginning with exhibitions at AMFORA Gallery, Michael Burke gallery and showing at Doggett St. gallery for over 15 years. Usher is now represented by Alexandra Lawson Gallery and, since 1993, has had over 30 solo shows while being involved in numerous groups exhibitions both internationally and in Australia. 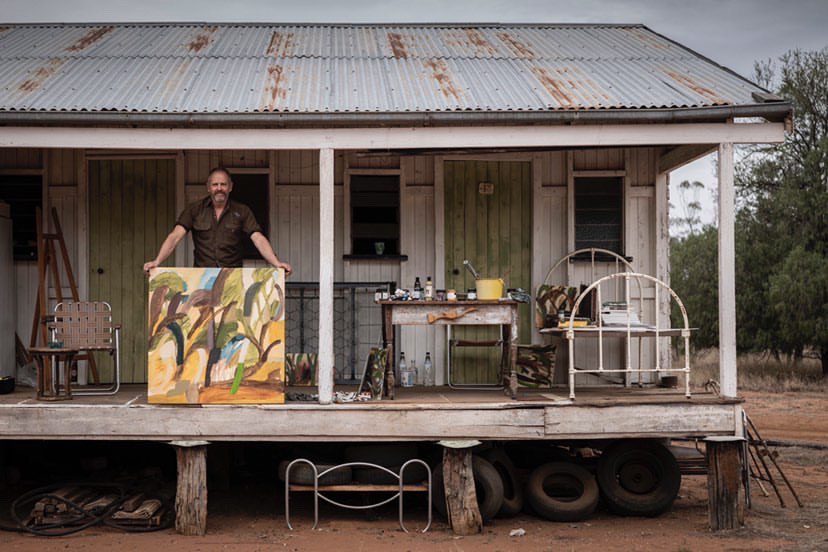 The Gold Coast has played a pivotal role in his work, having held a number of ‘Seascape’ exhibitions. His work is a culmination of trips across the country, and his strong conection with the water from many years spent surfing the Gold Coast, amongst other favourite destinations. 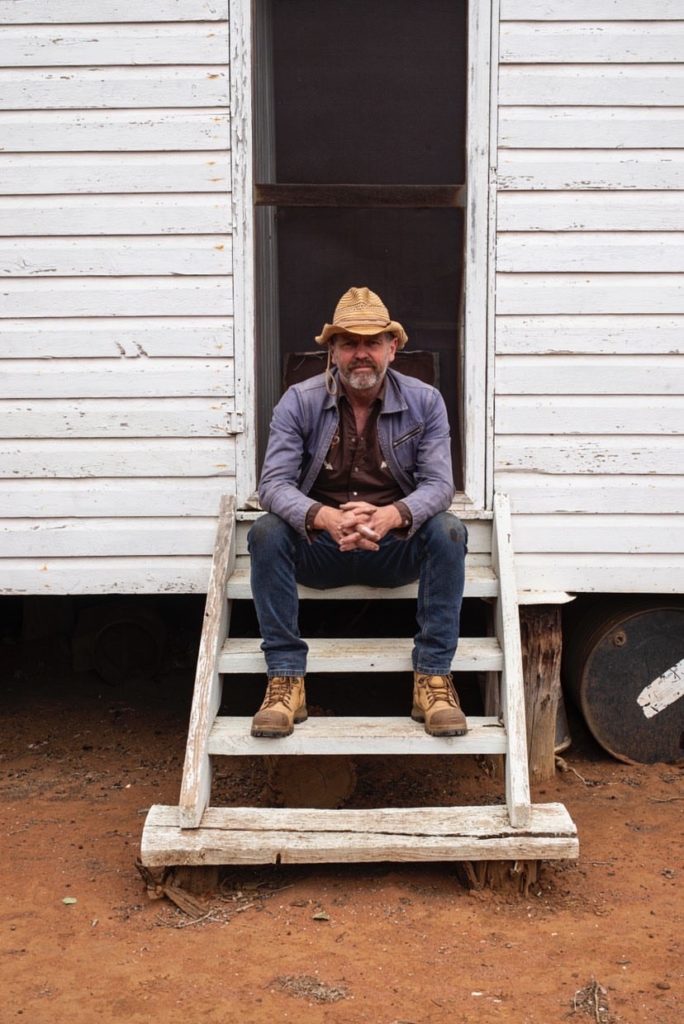 He has travelled and painted with artists such as Chris O’Doherty (aka Reg Mombasa), Euan Macleod, Lucy Culliton, Elisabeth Cummings, Leo Robba, Jo Braithwaite, Neil Frazer, amongst others.

His current work focuses on time spent on family sheep and cattle stations in Western Queensland. He paints with a frenzied commitment, Usher states, ‘it’s critical to paint with intent, when I am on the road, working en plein air, I am only interested in capturing the atmosphere of the site rather than a literal representation. My aim is to translate the emotion of the experience into paint. My work is a kind of frenzy of brush strokes and mark-making, I am striving to capture the immediacy/energy of the scenes before me, before the moment vanishes. I am greatly influenced by other great Australian Landscape painters such as Joe Furlonger and Euan Macleod. Joe paints without fear, forming shapes of trees, figures, clouds, merging them into meandering horizon lines that progressively reveal the landscape around him’. 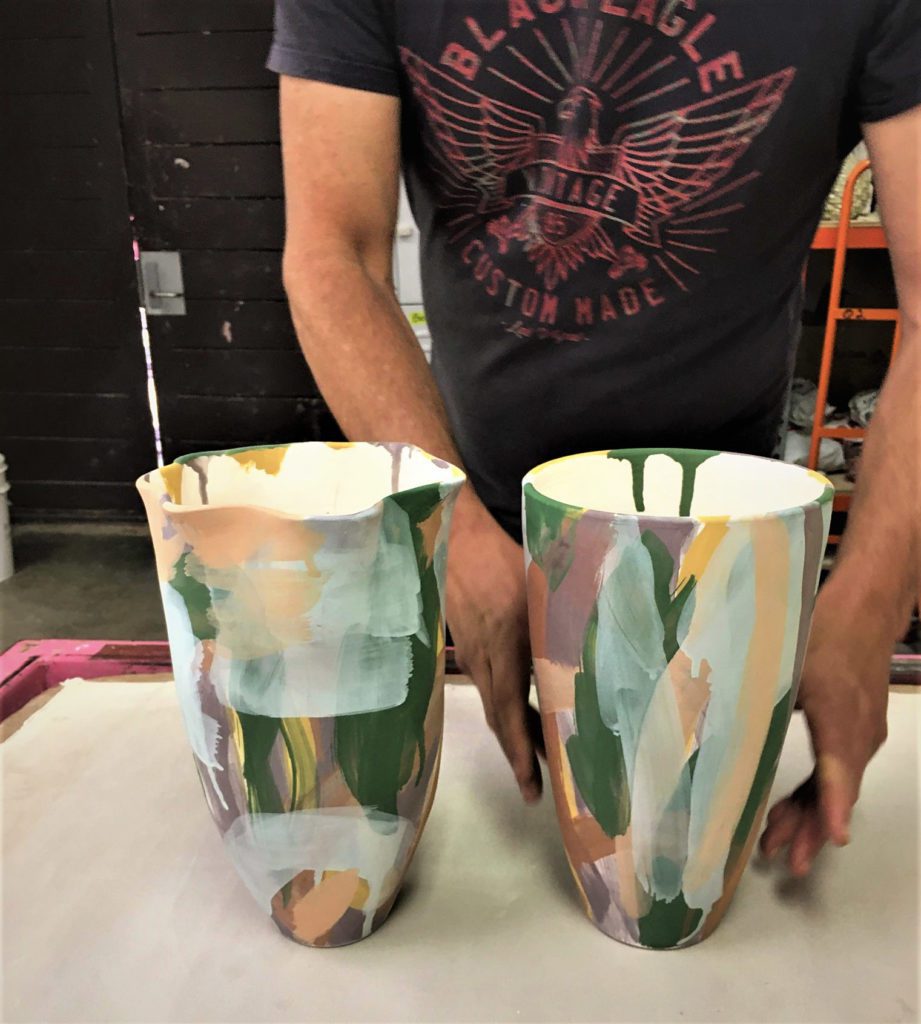 Usher’s approach to painting is to grind the brush across surfaces, building layers of forms, shapes into trees, undergrowth, skies and hidden spaces until they begin to swirl into a maelstrom of colour and form. These abstracted landscapes capture the artist’s intent, and deliver paintings that require the viewer to interpret these scenes in their own way, letting the images slowly emerge to fill their senses. 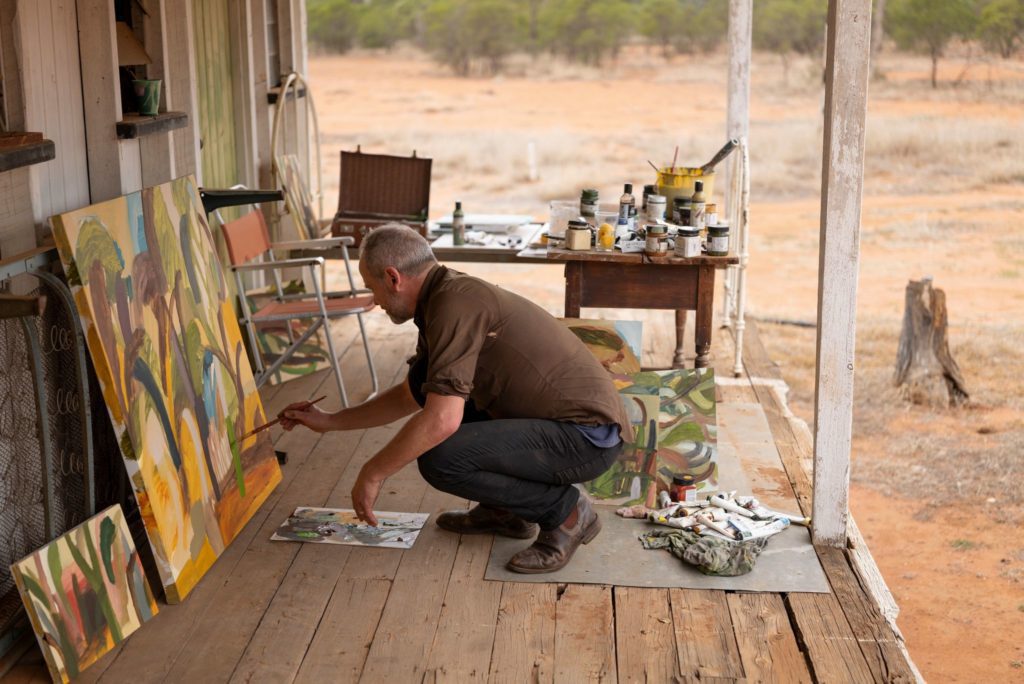 Usher works prolifically, painting on large works with the same intent as more intimate works, ‘it’s actually easier to work on a large scale simply because you have more room to move. I guess in some way a larger surface allows you to instil a sense of the scale of the scene, landscape, seascape, you are trying to interpret or capture.’

Usher has just completed a solo show for ALG at Dunkeld House in Toowoomba, and a group show with Naomi Watts and Leisl Baker, at Latrobe Gallery in Paddington Brisbane. His next big show is a collaboration with Melbourne artist Stephen Spurrier at the Toowoomba Regional Art Gallery; both Spurrier and Usher lecturer in Visual Arts at the University of Southern Queensland and now call Toowoomba home. Usher’s next trip to the coast is in February to stay with friends at Kirra and Currumbin to paint seascapes for a show later in 2021. 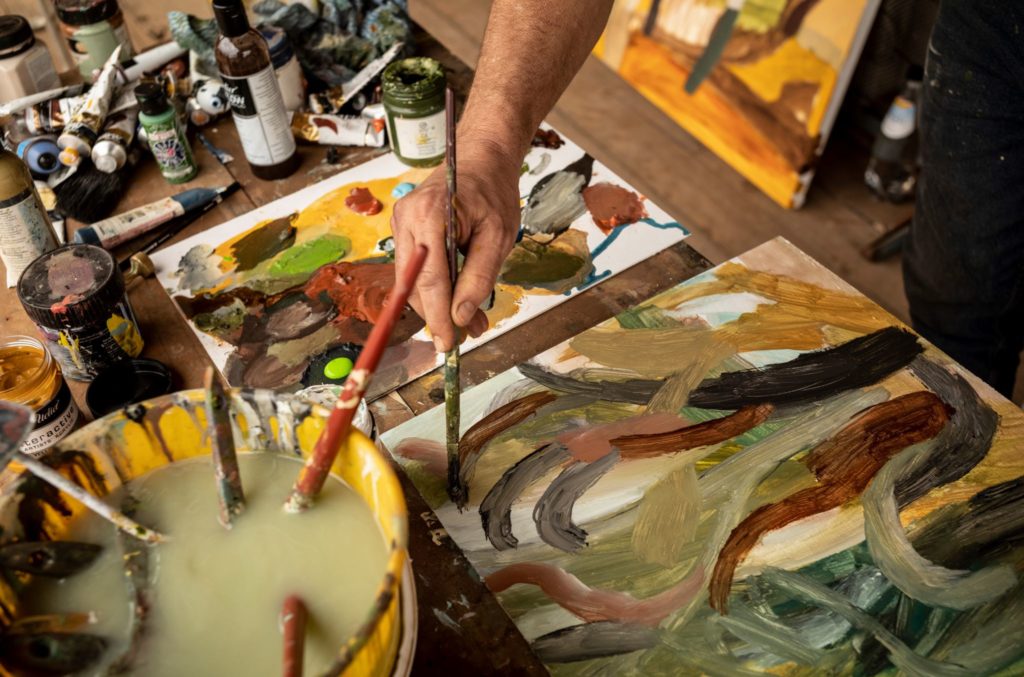 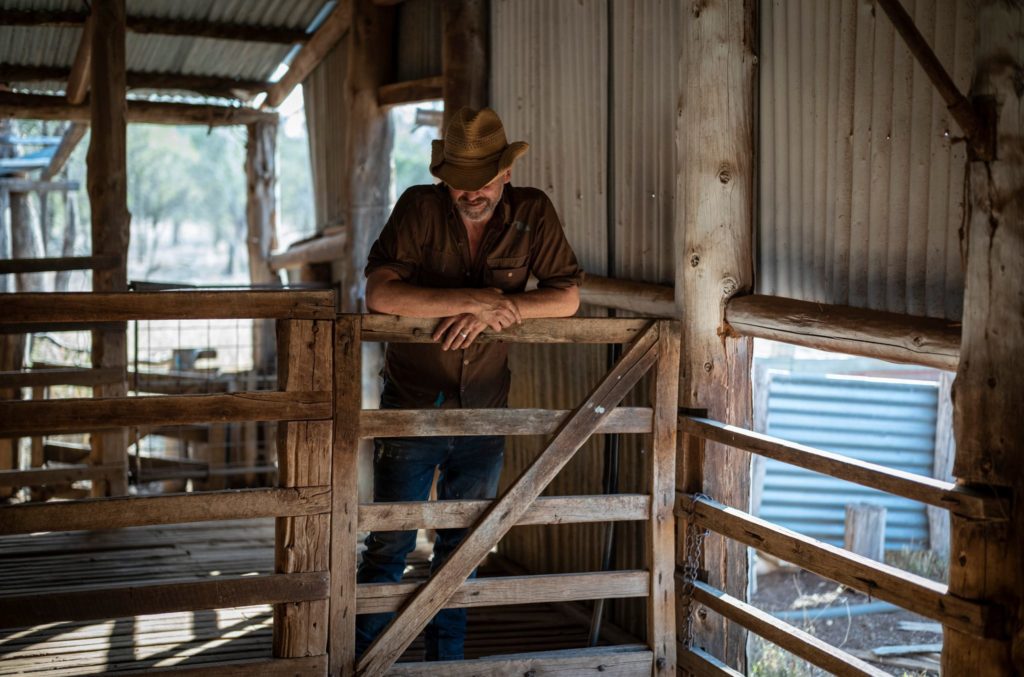