Caring for our environment 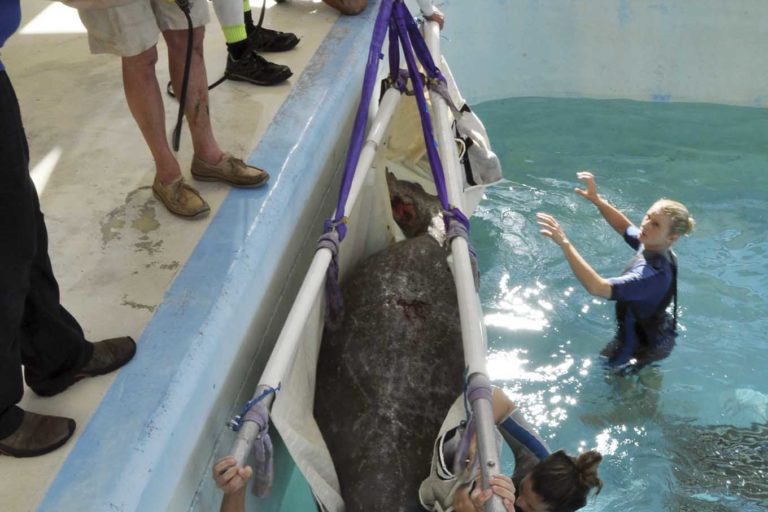 For more than 40 years, Sea World, through the not-for-profit Sea World Research & Rescue Foundation, has been playing a vital role in the conservation and care of marine life in Queensland. 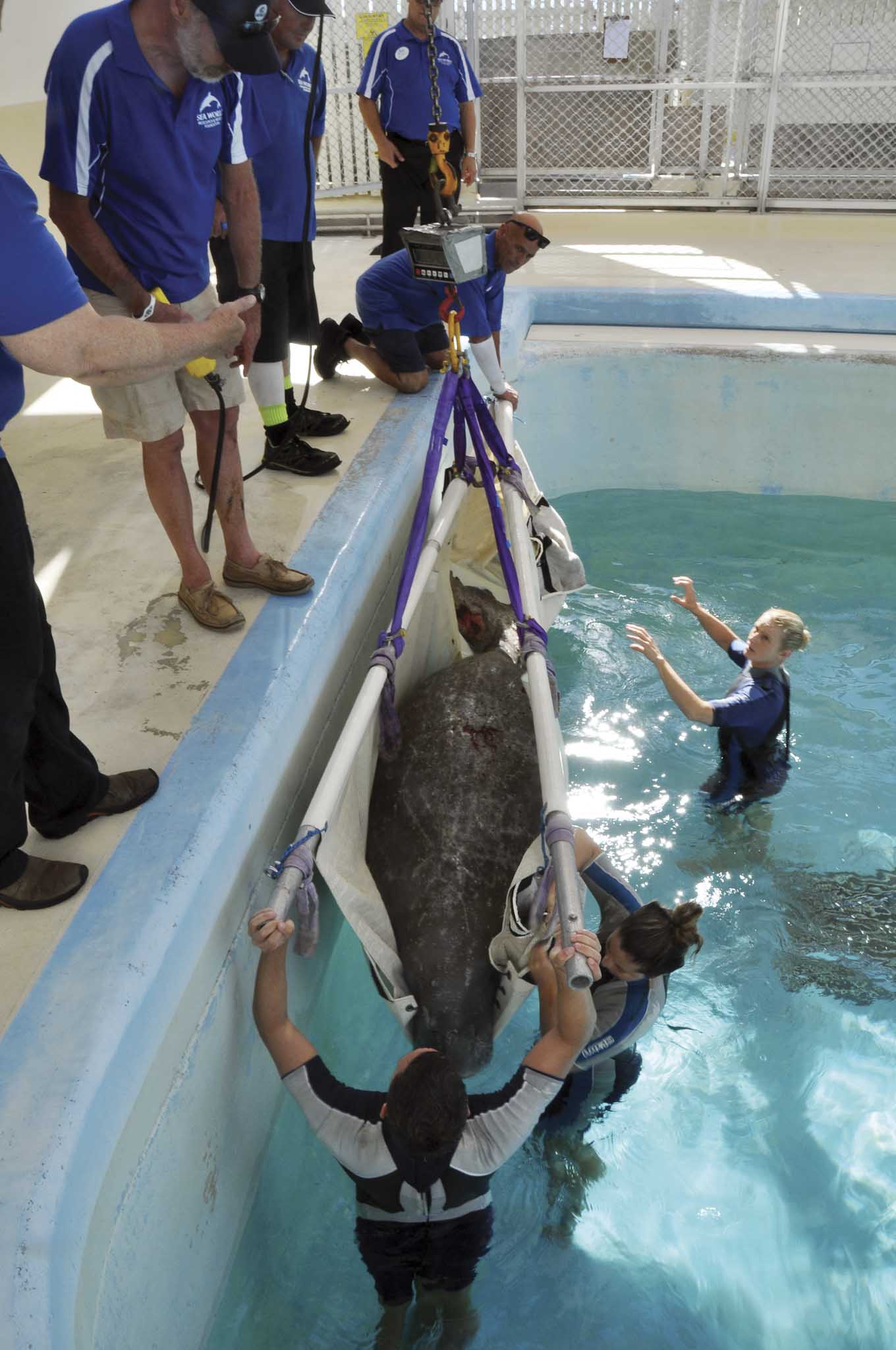 Of all the projects Sea World has been involved in over the past 40 years, one of the most significant research initiatives we’ve undertaken has been the annual health assessment of the dugong population in Moreton Bay.

Despite dugongs being iconic to Moreton Bay and heavily entrenched within indigenous culture in Australia, there has been very little information known about this species. So, together with The University of Queensland, we developed a plan to gather vital information on the mystical mammals and headed out into Moreton Bay on our first, ground-breaking trip in 2005. 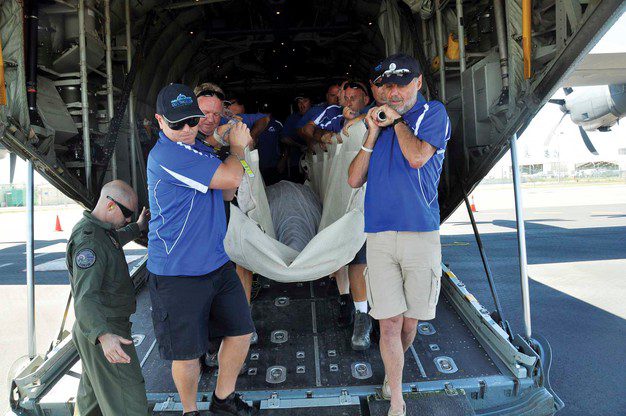 This research project, headed up by a highly skilled team of marine mammal experts, biologists, and veterinarians from Sea World and The University of Queensland, is the only long-term study in the world focusing primarily on dugongs. Throughout the years of research, we have been fortunate to work with the incredibly passionate Dr Janet Lanyon, who is the leader of the UQ Dugong Research team, and this vital research could not be conducted without the shared passion, knowledge, and experience of all involved.

Each year, we aim to assess 20 dugongs over a period of a week in a unique rodeo-like process that involves spotting a wild dugong before diving overboard from our smaller vessel and supporting the animal in the water before lifting the dugong — remembering that a large adult male can be around three metres long and weigh more than 500 kilograms — out of the water in a specially designed stretcher and on to the deck of our larger research vessel, Sea World One. 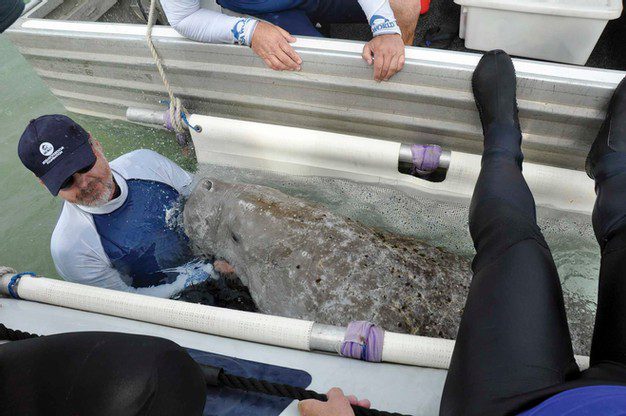 Once the dugong is onboard, the team gets to work and, to minimise stress on the animal, swiftly conducts the assessment on the individual animal’s clinical health, body condition (length and weight), and reproductive status. Through this method, we have established baseline clinical health parameters for the species and now know the normal range of blood values for dugongs, which puts the team in a position to identify animals with suspected health problems and try to rectify the source of these problems.

Prior to this, one of the growing threats to the Moreton Bay population has been the growing number of recreational vessels using the area. The number of recreational boats and personal watercraft in Moreton Bay has risen, and we believe this has had a direct impact on the animals and their habitat. As a result, we have been able to work with government and media to get this message out and encourage boaties to be aware of their impact and observe the many go-slow zones that have now been designated to protect these mammals in the bay area. 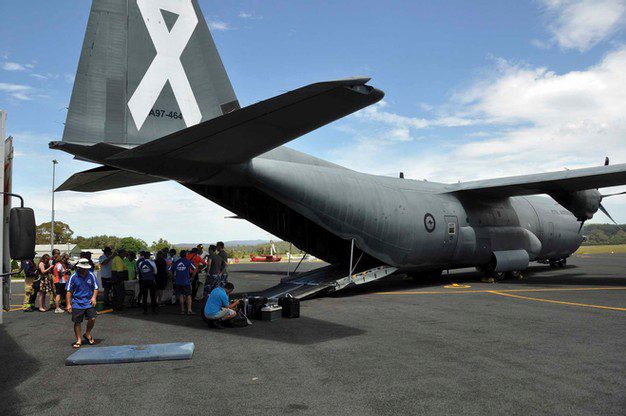 Since commencing in 2008, we have evolved the research and in 2015 conducted world-first metabolic trials on wild dugongs. Once the animal was onboard, it would be held for a short time in a specially made and designed metabolic chamber, which allowed researchers to measure the dugong’s oxygen consumption. This groundbreaking research provided the first insights into the metabolism and energetics of this large, slow-growing, and slow-to-reproduce marine mammal.

The research identified that dugong metabolism is high, meaning their energy requirements are also high and explains why they grow so slowly on a low-energy seagrass diet. If dugongs must satisfy high-energy requirements and still grow to maturity, reproduce, and stay healthy, it is imperative that we protect the most nutritious, energy-rich seagrass habitats. 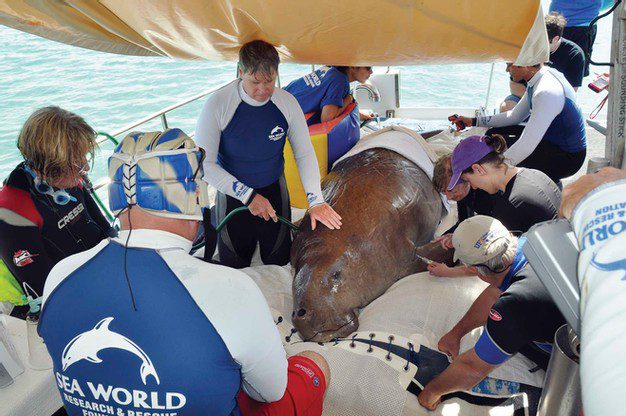 Dugong research is an ongoing priority for the Sea World Research & Rescue Foundation, and our research and expertise has previously resulted in the rescue of dugongs ‘Pig’ and ‘Wuru’, who currently reside at the Sea Life Sydney Aquarium.

Our expertise in the species was also called on in 2016 when we were made aware of a dugong that had been found in the colder, southern waters of Merimbula on the New South Wales south coast. Merimbula is well outside the normal range for dugong populations, which are tropical and subtropical species, and it was extremely unusual for one to be found this far south. This animal was in poor condition, and with cooler waters forecast and a lack of suitable seagrass, it would have ultimately died if left in the area, so we planned a joint rescue operation with marine experts from Sea World, Sea Life Sydney Aquarium, and the NSW National Parks and Wildlife Service to relocate the dugong to the warmer waters of Moreton Bay. 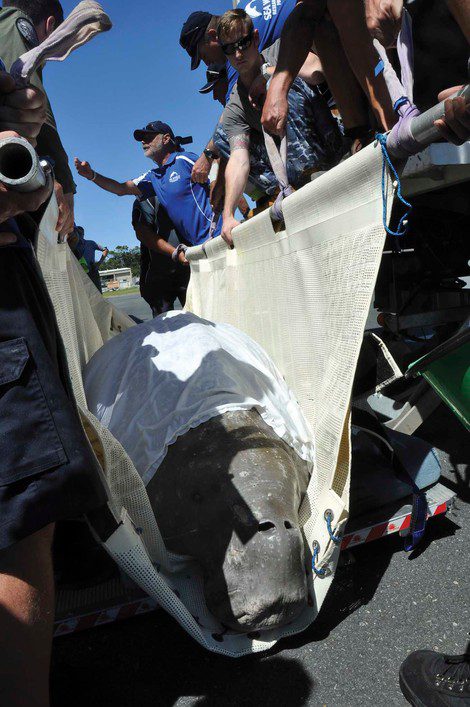 In order to relocate the dugong, affectionately named ‘Merimbula’, we used the skill and expertise we had honed from our years of research trips in Moreton Bay, and on the second day of searching, we were able to catch the dugong and bring him to shore to conduct a health assessment and prepare the animal for travel — in front of what I believe was the entire population of the town!

To minimise travel time, the Royal Australian Air Force, who we have a good relationship with, combined routine flying operations to assist with the relocation process and flew the dugong and the specialised veterinary team from Merimbula to the Gold Coast for rehabilitation at Sea World. ‘Merimbula’ was under the constant care of our specialised vet and animal care teams at Sea World and was placed on an antibiotic regime and fed a diet of their preferred seagrass, which had to be hand-collected daily from Moreton Bay. 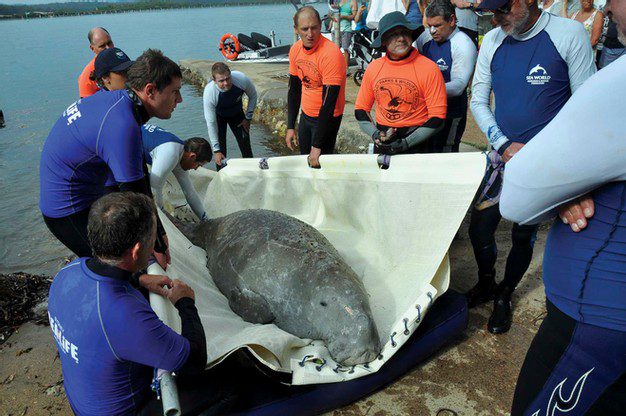 The 340-kilogram, 2.7-metre-long male dugong spent two weeks recovering at Sea World where his health and skin condition improved to a position where he was able to be released into Moreton Bay and join the population of approximately 1000 dugongs thanks to warm waters and suitable seagrass. 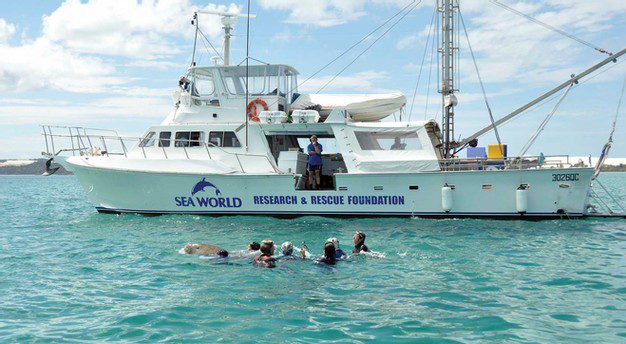 This was an extremely rewarding rescue and release given the vulnerable status of dugong populations, and outcomes such as these are a credit to the outstanding work Sea World and fellow agencies do in rescuing and rehabilitating marine life. Equally as important to the relocation of the dugong are the strong community messages that result from these types of rescues, as they put a spotlight on the importance of marine conservation. 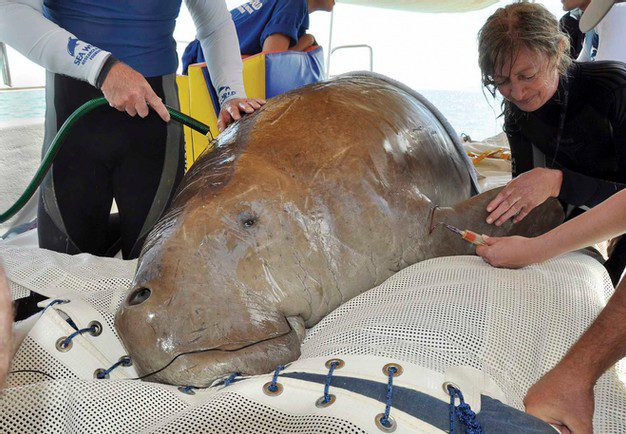 I, along with the rest of the team at Sea World, remain committed to the ongoing rescue, research, and conservation efforts of the marine environment. 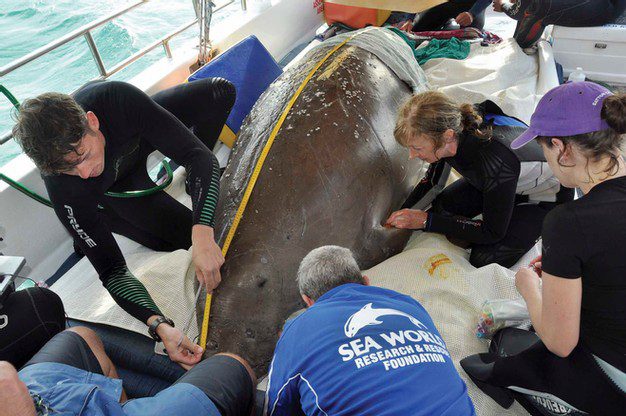 Unfortunately, with marine life it is often a case of out of sight, out of mind, with the environment being below the surface, so I would encourage everyone using waterways for boating, fishing, and other recreational purposes to take a greater care when using the environment.