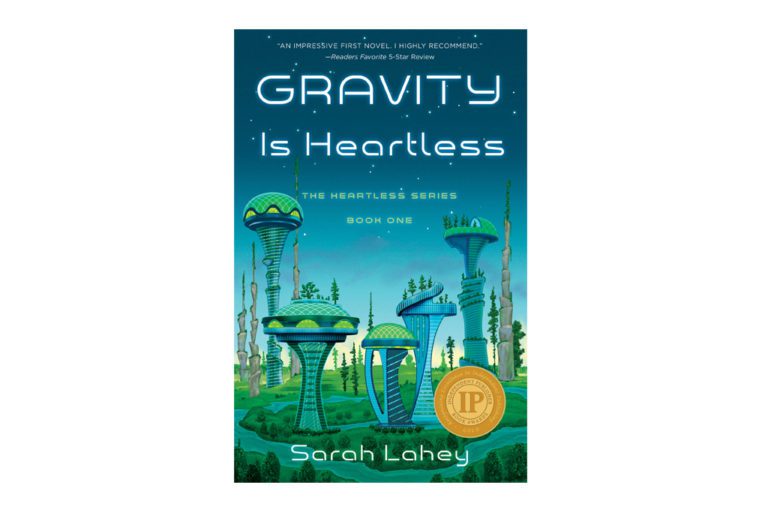 About the author
Sarah Lahey is a designer, educator, futurist and writer. She holds a bachelor’s degrees in interior design and Communication and Visual Culture, and works as a senior lecturer teaching classes on Design, Technology, Sustainability and Creative Thinking for a design college in Sydney, Australia. With over 30 years’ experience working in the industry, Sarah is passionate about the designers who are shaping our cities and environments, reflecting the way we want to live in the 21st Century.

About the book
What will the world look like in thirty years’ time? How will humanity survive the oncoming effects of climate change? Set in the near future and inspired by the world around us, Gravity Is Heartless is a romantic adventure that imagines a world on the cusp of climate catastrophe.

The year is 2050: automated cities, vehicles, and homes are now standard, artificial Intelligence, CRISPR gene editing, and quantum computing have become a reality, and climate change is in full swing―sea levels are rising, clouds have disappeared, and the planet is heating up.

Quinn Buyers is a climate scientist who’d rather be studying the clouds than getting ready for her wedding day. But when an unexpected tragedy causes her to lose everything, including her famous scientist mother, she embarks upon a quest for answers that takes her across the globe―and she uncovers friends, loss and love in the most unexpected of places along the way. Gravity Is Heartless is bold, speculative fiction that sheds a hard light on the treatment of our planet even as it offers a breathtaking sense of hope for the future.

Reviews:
“Loved it. An adventure romp . . . set in a not too distant future and played for high stakes. Gravity Is Heartless is packed with insightful and oft heart-warming observation about what makes us human in the first place. It’s fun, witty and endlessly inventive . . . Bravo.” Peter FitzSimons, journalist, commentator and author of over 20 books, including, Kokoda, Gallipoli and Nancy Wake.

“The author’s Earth of the not-too-distant future is an intriguing, alien place, and readers will delight in watching Quinn move through it. Lahey’s prose is lush – describing a deeply imaginative world – and on the whole, the story is thoroughly engrossing. An engaging adventure set in a deftly illustrated future.” Kirkus Reviews

“The first volume is a new The Heartless series, Gravity Is Heartless is an inherently fascinating and fully entertaining read that showcases author Sarah Lahey’s impressive flair for originality and the kind of narrative storytelling style that keeps the reader’s attention fully focused from cover to cover.” Midwest Book Review

“Infused with wonder and the brilliance of the real world, Lahey excels in Quinn’s narration, breathing life into the dying world while giving Quinn a unique, knowledge- based personality. The nuclear engineer’s fascination with the periodic table, in particular, was a narrative delight that strengthened relationships while showing off Quinn’s science-honed mind.” Paperback Paris

“In the aftermath of the tragedy, which included losing her scientist mother, Quinn is left to fend for herself and grows tremendously as a character. The supporting cast, including her best friend, a robotic meerkat, and a tough yet witty guerrilla fighter, are interesting in their own right, and almost steal the show. Lahey’s debut is the beginning of a trilogy, so it is fitting that it ends with a cliffhanger, leaving readers unsure of Quinn’s next steps in an increasingly unstable world.” Booklist

“The amount of research that went into this in unbelievable. The way the author describes certain things and goes into detail is amazing. This world feels so real and I was quite shocked while reading this. The novel is set in 2050, which is only 30 years away and it felt like I was there in the year 2050 with those characters. Everything Lahey exquisitely
describes feels so realistic. If you would tell me that this is how the world will look in 30 years, I would believe you. And that again shows how much thought and research went into this.” Heavenly Bookish

“A highly entertaining read about the effects of global warming. I found the book utterly entertaining. The setting was (sadly) realistic, and the characters and story were very creative.” Pondering the Prose.