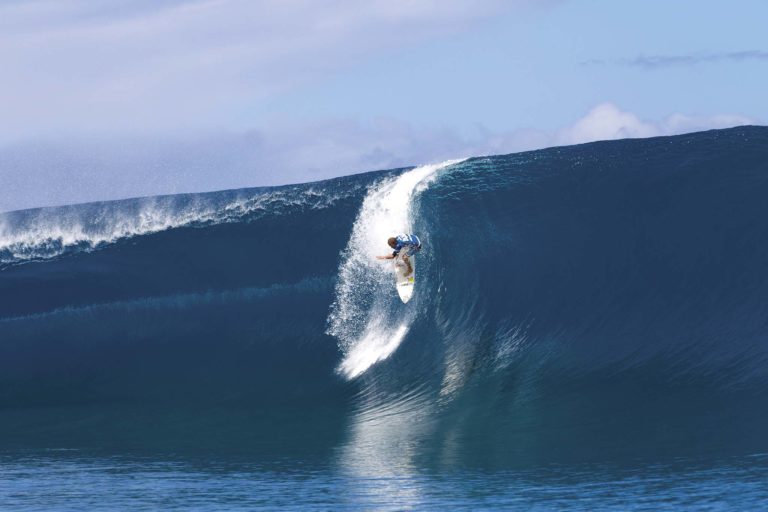 Breakfast Radio host Bridget Daley loves to make us laugh but the radio funny lady was reaching for the tissues when she pulled off a sentimental reunion with her father, Bede Daley and his namesake, Gold Coast professional surfer Bede Durbidge.
Amazingly, Bede Durbidge had his unusual first name picked out just a week before he was born, after his father and Bridget’s dad met on North Stradbroke Island back in 1983.
Bridget Daley tells ORM how the chance meeting unfolded…
“Dad was hitch-hiking to the Little Ships Club at Point Lookout one Friday afternoon and Chris Durbidge pulled up,” Bridget says. “Chris had just finished work as a plumber on the sand mines. Dad said: ‘Well come in and I’ll shout you some beers for the lift’. Then it was on…”
Just like his high-profile daughter Bridget who’s blessed with the gift of the gab, Bede Daley left in an indelible impression on Chris Durbidge over beers at Straddie that summer evening.
“Apparently Dad was full of personality and full of one-liners so Chris Durbidge went home to his wife who was pregnant – and who had all girls – and said, ‘Look, I met the most amazing bloke, an eccentric dentist, and his name is Bede. If we have a boy, I’m naming him Bede,” Bridget says.
Sure enough, when a baby boy was born in February 1983, the Durbidges did indeed choose Bede, a name which literally means ‘prayer’ in reference to the seventh-century English monk, Saint Bede.
Bede junior went on to become an Australian surfing prodigy – cruising from the beach breaks of Straddie as a promising grommet to the World Championship Tour, and in 2008, a number two world ranking.
“Growing up, we all thought Dad made up this story about the Australian pro surfer being named after him, because Dad is such a jokester like that,” Bridget explains.

“It wasn’t until I did an interview with Bede Durbidge on-air years ago, I asked him to tell me the story of who he was named after. He explained that his Dad, Chris, met this eccentric dentist on Stradbroke Island and was having beers with him and that’s when he decided he wanted to name his boy Bede.
“When Bede Durbidge told me the story, I said, ‘Oh my God, that was my dad you were named after!’”
A keen surfer too, Bede senior watched Durbidge’s career with avid interest, but never expected to meet the younger Bede until Bridget, the youngest of six girls, decided to surprise her dad.
“Dad never cries, but he got really teary on the phone to me one day. He said, ‘Before my life ends, I really want to meet Bede, and I’d like to show him the surf board I made when I was 16’. I knew we had to make that happen,” Bridget says.
As fate would have it, Bridget’s sister Shelley, a nurse at John Flynn Private Hospital, met Bede Durbidge during his long months of recuperation after his pelvis was crushed on the lava reef of Hawaii’s Pipeline, the deadliest wave on earth.
Durbidge initially thought he’d be a paraplegic, doctors likening his injuries to those normally seen in car crashes. But despite having months of rehabilitation ahead of him, the affable surfer promised that as soon as he was on his feet he would come and meet the man who inspired his distinctive name.
With the plan set in motion, Bridget and Shelley rounded up the extended Daley family. Bede Daley, 77, was taken to Len Wort Park, Currumbin on the pretext of a champagne picnic, completely unaware his daughters had secretly arranged for Bede Durbidge to turn up.
“So we were sitting in the park drinking champagne and Bede was hiding around the corner, and the next minute, he walked past holding the Malibu surf board Dad made in the 1960s with the initials BD on it,” Bridget says, laughing at the memory of the meeting.
“It took Dad a minute to figure out why this guy was walking past with his old surf board, but then Bede Durbidge went up to Dad and said: ‘G’day Bede, I’m Bede.’
“Dad couldn’t wipe the smile off his face,” Bridget says. “It meant so much to him to meet Durbo and it meant so much to my sisters and I to see him happy.”
For his part, Currumbin-based Durbidge was ‘stoked’ he could meet Bede senior and make a wish come true. “I grew up knowing the story of how I was named, and we’d spoken on the phone, but to finally meet him after 33 years was pretty surreal,” Durbidge recalls.
“I’d heard good things about him but to meet him in person… he was just a champion bloke and I’m even more honoured to be named after him. There’s no better feeling than stoking someone out. If I’m not competing or have other commitments, I’ll make the effort to put a smile on someone’s face.”
The meeting gave the two Bedes a chance to finally reminisce about life on Straddie, the pair also discovering they share a love of craft beers.
Bede Daley’s home brew and backyard pub complete with bullnose awning and swinging saloon doors is the stuff of family legend.
These days Bede Durbidge is famous for crafting a few brews of his own. He co-owns the phenomenally successful Balter Brewing Company run with fellow surfing legends Joel Parkinson, Josh Kerr and Mick Fanning.
The brewing business – along with media commitments and down time with his young family – has given Durbidge a positive focus after the physical and psychological trauma of his pipeline injuries.
“I’m just having a great time with the Balter Brewing Company project,” Durbidge says. “I had always dreamed of getting into the craft beer world and just loved everything about it. We decided to start a brewery and a brand and it’s gone from there.”

Durbidge studied the whole beer making process extensively and even took a business course, but while he and his surfing mates are hands-on with the Balter brand, they have an award-winning brewer in charge of quality control.
“We’re the founders, but we have a general manager, a brewery manager, head brewer and sales and marketing people,” Durbidge explains. “We’ve put people in key areas to run the business and to market it. Now and again we’ll go down and pull beers. People might go in and Mick, Joel or myself might be pouring beers which adds to the experience! It’s been received very well. The Gold Coast is a popular destination and it just offers another cool thing to do and for people to have an experience they might not have had before.”
As for the reunion with Bede Daley, Durbidge hopes he might in turn inspire someone to name their son Bede and keep the name going strong for another generation. “All you want to do is set a good example to the kids so that would be pretty cool,” he says.

Joel Parkinson co-owns Balter Brewing Co. with three other professional surfers Mick Fanning, Bede Durbridge and Josh Kerr. Here, Joel talks to ORM about why they decided to open a boutique brewery on the Gold Coast.

So, why start a brewery?

[Laughing] Why not? Because we could? We live in Queensland and we enjoy drinking beer… It seemed like a great idea, starting a craft brewery, something we could get involved with and take an interest in. We had no idea it would snowball into what it’s become. We had dreams but I don’t think any of us dreamed it would be so well received or so much fun to be involved with. It’s been such a cool little enterprise.

We see you sipping a Balter in the photos, but has it been hard work to get the label off the ground?

I guess all I can say is that I’ve learned so much about beer and brewing. It’s been a real education. I went down to Beer Week in Melbourne and had the best time. I met some of the coolest people in the craft beer industry, people from breweries all over Australia, so many cool people with great stories.

You guys had been hatching the plan for quite a while, how did it feel to finally open the brewery and pour your first Balter from the tap?

I actually wasn’t at home when it opened to the public, I was over surfing the contest at Margaret River. But the weekend I got home from Margarets it was the best thing to walk in and see the place buzzing, full of people, see the food truck there and a full house drinking our beer. It was a really overwhelming moment and it dawned on me that we’d done something quite cool, getting our brewery up and running.

It seems that for you guys – the surfers anyway, you, Mick, Bede and Kerrsy – it’s as much a reason to hang out together having a beer as anything else…

It feels more social than a business enterprise. We’re in it to enjoy it, that’s the meaning of Balter – to enjoy – and that’s why we’re doing it. We hope everyone enjoys the beer and enjoys turning up and just hanging out. It’s such a great atmosphere to walk into to walk into Balter everyone who works there enjoys it. There’s a great bunch of crew there, from the general manager to the canning boys. Even my cousin Mitch is working there these days. It’s a great vibe.

Totally! I’m fully into craft beer now and I find it hard to drink mass-produced, old school beer. I’m in Europe at the moment and drank a 1660 the other day and it just tasted like water. There was no flavour in it. It was like watered down carbonated syrup. I’ve drunk quite a few Balters since we opened – maybe a few too many – but everyone still tastes like the first one, there’s still that buzz there around drinking a beer you helped create.

Your usual watering hole of course is the Rainbow Bay Surf Club, is Balter on tap there?

Of course. What better place to drink one!