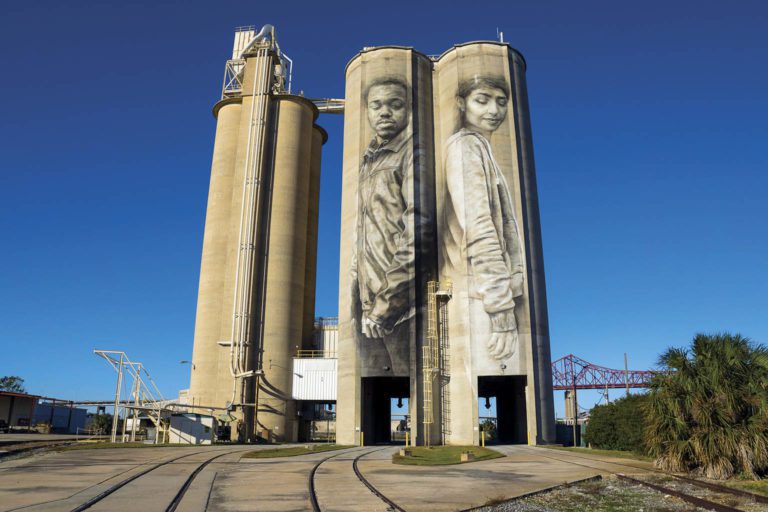 Every day, from their vantage point high above the southern Gold Coast, the young man and young woman enjoy the most breathtaking and inspiring of settings.

On one side is the coastline and ocean; on the other is the lush hinterland. To the north is the spectacular skyline of Australia’s sixth-largest city. Across the border is the expanding Tweed and Northern NSW region. Right next door is the bustling Gold Coast Airport.

However, the best view comes from exploring the university campus itself, where unfolds an equally impressive picture of optimism and opportunity, potential and ambition, community and collaboration, expertise and ideas, culture and respect.

How lucky is that ?

Guido van Helten graduated from Southern Cross University in 2008 with a Bachelor of Visual Arts focused on printmaking and public art. He was delighted to return for the mural project.

“This project has extra importance to me because this is my state and my place, and this building is pretty prominent on the Gold Coast,” he said at the time of its creation.

“I come from a history of growing up using spray paint and working outdoors, but now I do public artwork, working with images of people intended to capture the imagination.”

Begun in February 2018 and requiring 50 litres of paint, the lifelike figures were immediately iconic.

That status only grew during the Gold Coast 2018 Commonwealth Games — more than two million passengers travelled through Gold Coast Airport at the time — and this has continued in the year since, both at the airport, within the university itself, and via the thousands of people who drive by each day.

The Southern Cross mural is one of more than 60 resonant, powerful images that Guido has painted in Australia and throughout the world.

Among the most notable are his image of a distressed doctor painted inside the nuclear disaster zone at Chernobyl in the Ukraine; four figures conveying rural struggle, but also dignity, captured on decommissioned silos in the Victorian country town of Brim; and the evocative study of 91-year-old Lee Estes, gazing upward and outward from the now-landmark The Nations tower (which is actually an old grain silo) in Nashville, Tennessee.

Armed with his spray paint cans, brushes, rollers, hydraulic boom-lift and no apparent fear of heights, the sheer size of the works in Guido’s growing global ‘canvas’ requires a technical and artistic achievement every time.

More tellingly, however, there is an even greater magnitude to the way Guido brings new meaning, new appreciation, and new beauty to the stories of these places and the people who call them home.

It’s an important message not lost on Southern Cross University Vice Chancellor Professor Adam Shoemaker. Now in his third year in the leadership role, Prof Shoemaker is both delighted and determined as he guides the Gold Coast’s youngest university into an exciting future.

“With almost 7000 students enrolled at the Gold Coast campus and with our campuses at Lismore and Coffs Harbour, Southern Cross University celebrates its 25th anniversary this year,” he says.

“We are a young university, one revelling in that youth and filled with a belief in what is possible. We are the Gold Coast’s only vertical campus, and everywhere you look there is a view of the future.

“I want Southern Cross to be Australia’s most progressive, connected, and student-engaged university, and Guido’s mural very much exemplifies that sense of aspiration.

“The two figures are looking into the future, into the buildings, into the campus. The image signals the openness and excellence of Australian talent, and it is stunning.”

Excellence is embraced at Southern Cross and is reflected in the success of graduates such as:

Stories such as these drive Prof Shoemaker’s belief in Southern Cross as a university of inspiration and aspiration across many fields — from the arts, nursing, midwifery, occupational therapy, podiatry and speech pathology to social science and social welfare, business, education, information technology, law, and tourism.

All of which brings us back to Australia’s luckiest students. Perhaps some clarification is required, for as it turns out, they are just two of many.

That’s also why you can’t miss them. Because down at Southern Cross University, Australia’s luckiest students are everywhere.