A missing girl, a murdered man …. A quiet little town like Millen 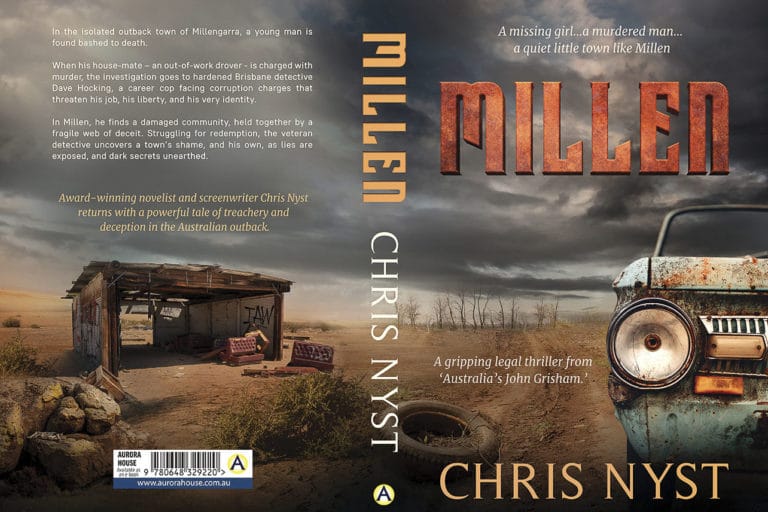 Ocean Road contributor Chris Nyst is not only a high-flying legal eagle but an award-winning novelist and screenwriter. His riotously-funny movie, Gettin’ Square – a crime comedy set on the Gold Coast – scooped the 2003 Australian film industry awards.

Millen is a powerfully-written and intriguing whodunnit that will keep crime-fiction fans spell-bound from the page to last. Below is an exclusive first-look for Ocean Road readers 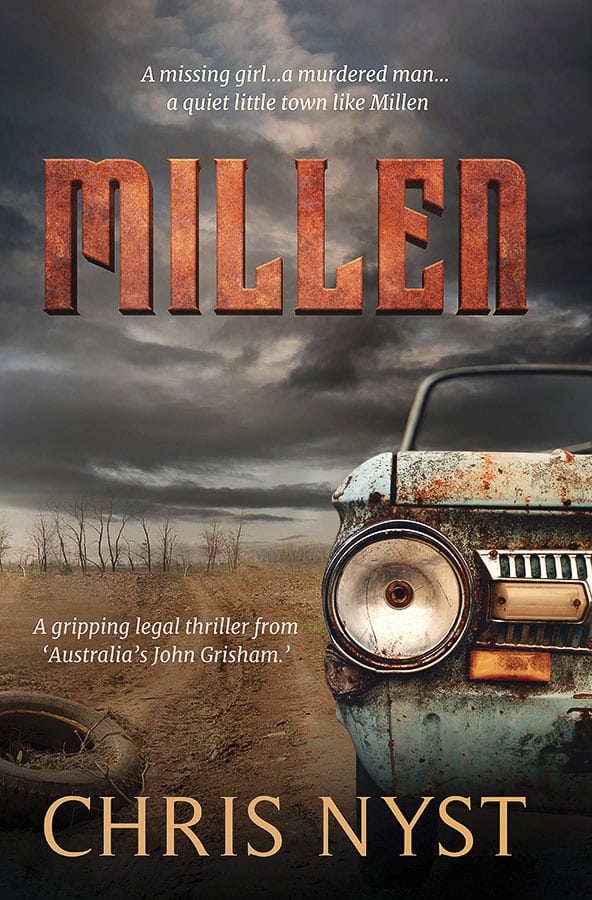 There was only one cop in Millengarra, and Police Constable 1/C Brian Ingles was it. So when the police house bell rang, at precisely 12:21 AM, Brian was the only one around to answer it. Of course, he was a bit cranky being woken up at that hour of the morning, but it came with the territory. Sadly, he was getting used to it. Saturday was the night when all the shearers, cow cockies and assorted yahoos came to town from far and wide to blow off a bit of steam and it was a rare weekend when someone didn’t play up like a two-bob watch and end up in the cells behind the station.

But Brian was surprised to hear this time it was big Rowdy McQuillan who had been kicking up a ruckus. From the little bit Brian had seen of him, Rowdy was normally a pretty level-headed young bloke. He liked a drink or two, but he mostly stayed well out of strife.

Elaine Barlow stepped Brian through the story methodically, giving him a blow-by-blow description of the whole event, such emotion as she did occasionally display bottled up and efficiently set aside, so she could get on with the story. As it came out, her story didn’t exactly sound to Brian like the Crime of the Century; a drunken local getting all his gear off and gallivanting round the town in the wee, small hours of the morning was hardly a unique event in Millengarra on a Saturday night. But as Elaine told the tale, dispassionately and in all the detail she could, Brian Ingles could see that whatever had happened out there in the dark up on Castle Street earlier that night had seriously disturbed the tough, experienced, emergency-ward nursing sister.

‘He was gone,’ she said eventually, staring blankly, a shaky quaver tickling her voice. ‘You could see it in his eyes.’ She unclasped her hands and watched a tiny tremble take control of them, then wrapped them tightly back together, and looked him straight in the eyes. ‘He was out to kill us all.’

It sounded a little bit dramatic to Brian but, just as a precaution, he took the paddy wagon and did a run down past the Arms Hotel, where Barlow said she had first seen Rowdy earlier in the night. The few stragglers still lingering out front of the pub all looked pretty harmless and subdued. There had been no trouble there, so far as any of them knew or had heard about, and no one had seen Rowdy McQuillan in hours. Brian nodded, suggested they all get off home, and then continued on his way, watching in the rear-view mirror as they climbed into their trucks and utes, cradling their home supplies of beer and spirits.

If that had happened back in Brisbane, he’d have gone back and made them all blow in the bag. But this wasn’t Brisbane; it was the bush. Brian had been told the rules. He was a county copper now, and things were done differently out bush.

He cruised on down to the so-called centre of town. It always had a still and eerie feel to it this time of the morning, a single intersection bathed in yellow light flooding from the old town hall, casting long and lonely shadows that made dark places all around. There was something strangely bleak about that intersection once the pubs had shut down for the night and the town had gone off to sleep; it always made Brian feel a tad uneasy. It was an empty, silent place and he didn’t like it.

Sometimes, when he found himself out on that intersection in the early hours on a moonless night like this, he felt like a marooned man, adrift and all alone in a dark and endless ocean. Beyond the buildings, the straight road out of town stretched far ahead, into the inky blackness of the outback night. It felt good to swing the truck around and head back the other way.

As soon as he got out onto Castle Street the constable could already see, well up ahead, on the right-hand side of the street, a dull, yellow light glow on the front porch of Tom Wilson’s house. There was only a smattering of houses anywhere on the whole length of Castle Street, and the others were all now in complete darkness, so Tom Wilson’s porch light was pretty much all Brian Ingles could see anywhere in the street.

When he reached the driveway, Brian swung the paddy wagon in, pulled up behind Tom Wilson’s car, and got out. As his boots crunched on the gravel, in the truck’s headlights he could see the car was still loaded with Wilson’s work gear — paint tins, rollers, and canvas drop-sheets — as if he’d just got home from a job.  Then Brian stepped from the driveway to the front of the house.

The first thing he noticed was the front door, wide open, with just the screen door shut. Then he saw the state of the glass sliding door. It was smashed, with glass spread all over the front porch. Instinctively, Brian lifted his right hand slowly to his waist and placed it gently on the butt of his service revolver.

‘Tom?’ he called tentatively. There was no response. ‘Tom? Are you there, mate? It’s Brian Ingles.’

There was still no sound anywhere. Brian stood still for a moment, looking and listening. Then he moved a little closer, cautiously, peering through the doorway, trying to see into the house.

Everything was still and silent, not a sound. When he looked back at the front door, he noticed something out of place. There was a mark on it, a small, dark-brown smear, what looked like an untidy scuff mark, at the centre of the door; and now, on the yellow metal handle, he could see just the suggestion of a faint crimson smudge.

He looked down at the porch; there were several tiny, dark-brown spots flecked across the dirty grey cement. Were they paint spots? Or had there been violence here? Was that blood smeared on the door?

A dark, uneasy feeling began gathering in his chest. Brian unclipped his holster and drew out his revolver.