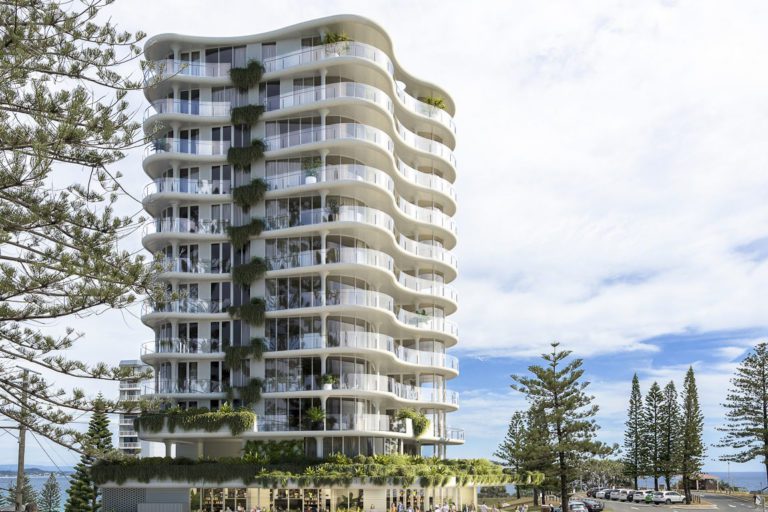 Coolangatta’s landmark new development Awaken has obliterated sales records with the $8.15 million sale of its two-level panoramic vista penthouse and 50% of its whole-floor apartments selling in quick succession.

According to data from Urbis, the $8.15 million sale far exceeds any sales figure ever recorded south of Mermaid Beach on the Gold Coast for an apartment, villa or unit.

The penthouse sale is the highest price a Gold Coast apartment has fetched in over two years, and was secured just one week after developer Brisbane-based S & S Projects, headed by Paul Gedoun, received the green light from council for the multimillion-dollar luxury 12-storey apartment project.

The sales were negotiated by Kerry Pezet, prestige sales specialist within KM Sales and Marketing.

‘Awaken’ will boast incomparable views of the famed surf breaks of the southern Gold Coast, resting on an iconic beachfront site in Point Danger, renowned for being one of the coast’s highest and most easterly points.

Only four of Awaken’s nine expansive whole floor apartments now remain, each set to go for upwards of $4 million apiece after more than $20 million in sales in the first five apartments to predominantly local and interstate buyers.

Sales to date have averaged $4.3 million, giving Awaken one of the highest average sales rates of any boutique apartment project anywhere in Australia.

Awaken Residences is the second Coolangatta development by S&S Projects, led by Brisbane developer Paul Gedoun. It follows the huge success of its sell-out $74 million Flow Residences during the height of last year’s COVID-19 lockdown, in which apartments sold for an average of $3.5 million.

Flow’s rapid sell-out left in its wake a market of buyers eager to secure their slice of S & S Projects’ luxury standard waterfront products after their Flow project was significantly oversubscribed with potential purchasers.

“These are discerning buyers who are attracted by well-designed, spacious and beautifully-appointed apartments in one of the most desirable coastal locations on Australia’s eastern seaboard,” said Mr Gedoun.

“As with Flow Residences, our approach with Awaken has been to create something extra special — a beacon of sophisticated design that provides a new benchmark for laidback and luxury coastal living.”

The penthouse was purchased by an undisclosed US customer who has already purchased in Flow.

The penthouse will be a sprawling 555 sqm over two levels, with bedrooms on the top level and living areas on the lower level.

Mrs Pezet said the penthouse buyers believed the site – perched on the top of the Point Danger headlands with sweeping 360 views of the Gold Coast, northern NSW beaches and the Tweed hinterland – was one of the most iconic in Australia.

“There’s no doubt this is one of the most spectacular locations anywhere in Australia and along with the architecture and design was keenly purchased by a couple currently living in the US but with deep roots on the Gold Coast,” she said.

“The remaining residences are expected to sell quickly once Awaken begins its international marketing campaign in coming weeks.”

Buyers have been drawn by Awaken’s breathtaking position atop one of the Gold Coast’s highest and most spectacular beachfront locations as well as its contemporary design that exudes a relaxed, sophisticated coastal vibe.

“We always strive to deliver high quality owner-occupier residences in A-grade locations and with Awaken we are really taking that approach to the next level,” said Mr Gedoun.

“Landmark sites like this are a developer’s dream but they also come with an inherent need to respect the sense of community ownership and surrounding environment.

“From the beginning, our vision for Awaken has been to bring all those unique elements together in a development that reflects its iconic location and what the southern Gold Coast beaches are all about.”

Awaken Residences will rise on a prime elevated parcel of land at 275 Boundary Street in Coolangatta’s desirable Rainbow Bay enclave, just a block away from Flow Residences.

Prominently positioned atop the Point Danger peninsula, it will feature elegant curves and scalloped edges that blend with the natural elements of its surrounds.

S&S Projects swooped on the landmark site last year, outlaying approximately $8 million for the prized parcel, which has a three-street frontage and caps one of the highest elevations on the city’s coastline.

It is currently home to the popular Café DBar, and its operators have eagerly seized the offer from developers to continue their legacy at the iconic location as part of Awaken.

Construction of the nearby Flow Residences is now underway and due for completion in 2022.